Gone are the days of vanilla and cinnamon scented candles because A.1., the company behind incredibly popular steak sauce, has just released a line of meat scented candles.

The limited-edition nine ounce candles retail for $14.99 each and are available in the three delicious scents: original meat, backyard barbecue and classic burger.

The candles burn for 50-70 hours and are available starting May 30 exclusively at A1MeatScents.

Yum: A.1. released imited-edition nine ounce meat scented candles that retail for $14.99 each

And if you’re not sold on the idea of a candle that smells line meat (rightfully so) then maybe your dad will be because according to the company, the candles would make the perfect Father’s Day gift.

‘They are a truly unique gift that will celebrate dad with an added bonus,’ A.1. said in a press release. ‘They will evoke memories of dad’s cooking and grilling using A.1. sauce and they smell amazing.’

‘We know our saucey tang resonates with dad, the website said. ‘So bring it home to him in a different way. A candle that will light the way to his heart. Isn’t that original?’

The idea with A.1. candles ‘was to evoke memories of dads grilling and cooking during the summer and special occasions,’ A.1. marketing head Ryan Nolan told the Daily News. 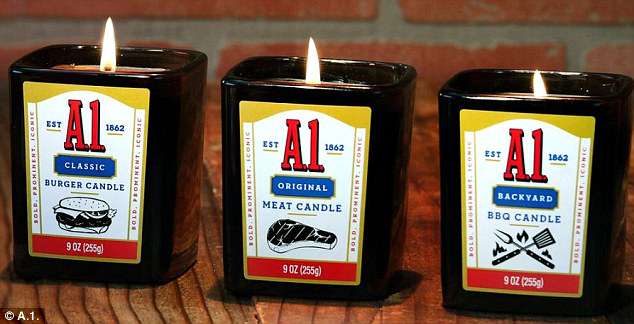 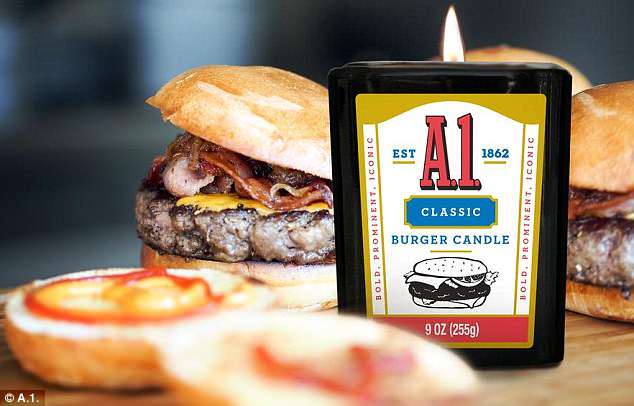 Long-lasting: The candles, which were released in honor of Father’s Day, burn for 50-70 hours

‘We have been working on getting the candles perfect for the past few months. It’s the first time we have expanded out of pantry for A.1.,’ Ryan added.

There’s no arguing that A.1. doesn’t get props for originality and steering clear from the ‘boring norm’ that is a tie, book, a bottle of cologne or a mug saying world’s greatest dad.

And there’s no doubt your father will be surprised come June 17 when he opens present and is greeted with a meat scented candle but for those interested in getting their dad a more conventional gift, then perhaps you can make your dad a nice steak dinner sans candles.

But for those who are sold on the candle concept, there are surprisingly other oddly scented candles (that don’t smell like meat) that range in smells from frat house basement party to nacho cheese, according to Buzzfeed.