A cruise adventure to the Galapagos

The Galapagos is used to the migration of exotic species but it is doubtful whether it has ever seen such pampered visitors as those being disgorged daily from the Silversea cruise ship.

Nourished with five-star cuisine and fine wines, the 80 or so passengers on one of the world’s most luxurious cruise liners clambered aboard inflatable motor boats and headed to a deserted atoll.

They were an easy-going and eclectic collection, mixing Manhattan bankers with Huddersfield university lecturers, lawyers of all tongues, the odd nature photographer, affluent Latin Americans, and hospital doctors from Australia whose anecdotage made the plotlines of Scrubs seem improbable.

Survival of the fittest: The stunning Galapagos islands

All were very welcoming to me, the sole solo passenger and a complete novice to cruise ships.

It soon emerged, however, that the locals were very little interested in any of us, on account of there not being any. At least, not of the human sort.

The sheer joy of this immediately hit us, as Silver Galapagos dropped anchor in a succession of idyllic, empty coves, one of the few corners of Earth where man has made no mark at all.

The turtles and giant tortoises, the marine and land iguanas, the circling frigate birds and the mildly different finches that so excited Charles Darwin when he spent five weeks here in 1835 were not in the slightest bit curious about us.

Lizards I have encountered in the Med scurry away as fast as possible, yet here they did not even raise their heads to look at me.

Only when we went for our daily snorkelling did the wildlife exhibit curiosity, with sea lions – on land, an animal seemingly in a permanent state of siesta – suddenly transformed underwater into outsized, boisterous puppies.

Fancying a closer look at some star fish and sea urchins, which here have spikes as long as knitting needles, I dived 10ft or so and suddenly found that two sea lions had decided to join me.

They seemed to be mocking my general aquatic uselessness, shooting between my legs, twisting and turning, and then appearing six inches or so from my mask, a hint of a smile on their faces. And it was impossible to resist smiling back.

Other creatures might have been curious about us as well, but they were distinctly less playful – we spotted white-tipped reef sharks in the gloaming grey waters further from the rocks. 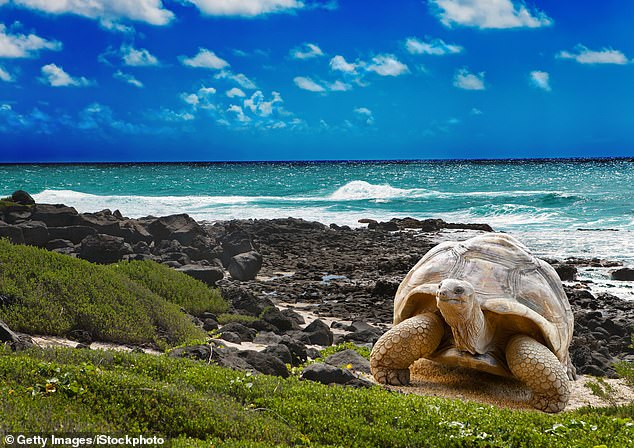 Lying 600 miles off the Latin American coast, nature in the Galapagos has been left to itself, with tortoises growing to the size of cattle. Pictured is a giant tortoise

They seldom confuse swimmers with a meal, but Silversea was taking no chances with its precious cargo. The motor boats hovered close to the snorkelling passengers, manned by muscle-bound young men in turquoise lycra uniforms and shades, like the henchmen of some Bond villain.

As an extra precaution, no snorkelling took place at dawn or dusk, when sharks feel peckish.

Sauntering along a deserted beach as the sun dipped one day, I rather fancied a bathe and had stripped down in preparation, until I noticed, darkly silhouetted in the gently breaking waves, a 7ft shark. The shirt promptly went back on.

The organisation of this voyage was slick and faultless, but one could understand why, during the first evening on board, we signed away liability ‘for unforeseeable events’ in documents drafted by the finest legal minds. However, over-indulgence was a more likely danger than the wildlife. 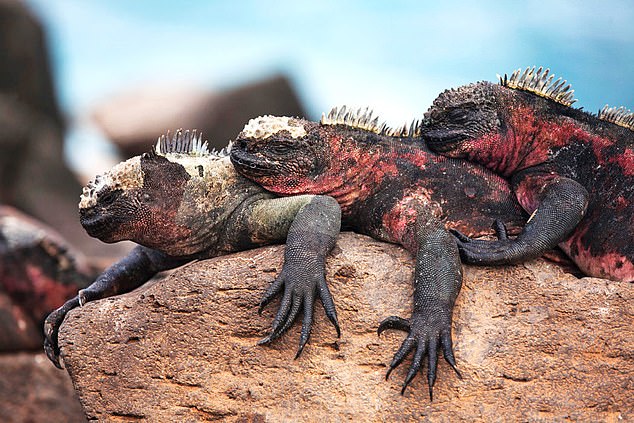 Three’s a crowd: A trio of land iguanas snuggle up on a rock

A couple of jovial single men from Newcastle seemed averse to leaving the ship at all, preferring instead to sample every conceivable lurid-coloured cocktail available – limitless and included in the ticket price. You had to admire their resilience. And why not? For many passengers, this was ‘a trip of a lifetime’ that had needed years of saving, but there are many different ways of enjoying it.

Two days on board and shared adventures had evaporated whatever reserve the passengers may have had. Fragments of chat offered fascinating insights into their lives: horse-breeding in Canada; the cluelessness of modern banking; a young Chinese woman giving up on censored journalism back home to seek her fortune in New York. 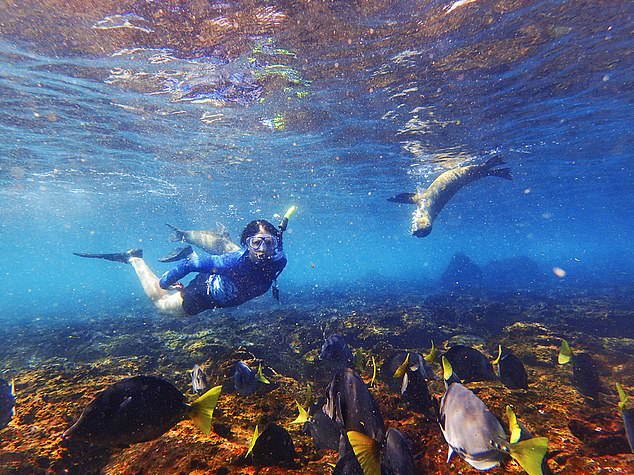 A diver has a close encounter with the marine life

I found myself linking up with a Bianca Jagger lookalike mother and her lovely daughter from Costa Rica, and we were joined by two sisters from Mexico.

‘Oh, my God, you know Boriiiiis,’ said the daughter, eyes brightening at the prospect of our astonishing Prime Minister – a former work colleague – when the inevitable topic of Brexit came up.

In this hemisphere, it seems impossible to dislodge the certainty that he is mini-Trump. ‘What’s he really like?’ she demanded.

‘Honest enough,’ I replied. ‘Unless you are married to him.’

A look familiar to womankind from Costa Rica to the Home Counties scudded across their faces.

The five of us matched the Geordies in going through the wine list – mainly Chilean and Argentinian – while dining on lobster, prawns and scorpion fish, a more flavoursome version of monkfish.

It is one of the impenetrable rules of the tightly controlled Galapagos national park that all the crew of Silver Galapagos had to be Ecuadorian, which made the cuisine rather interesting. One evening I joined a cookery class on deck making ceviche, a fish broth freshened up with lots of lime juice, chilli and coriander. 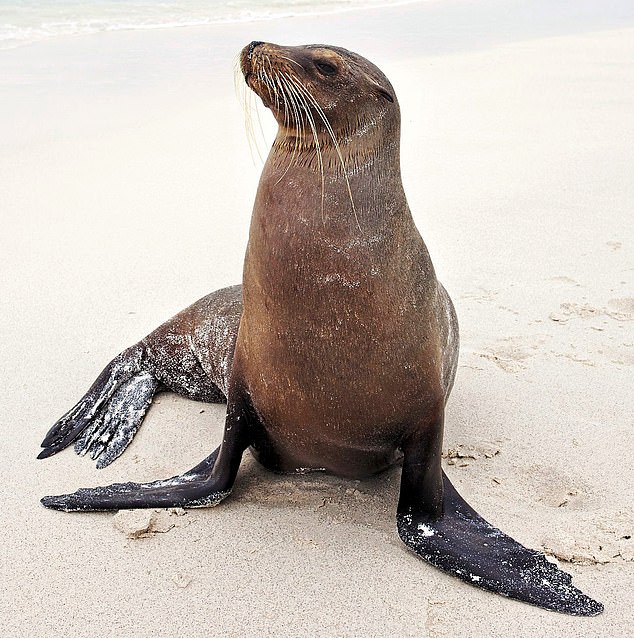 Many of the passengers were repeat customers, with friendships forged on excursions to exotic locations such as Antarctica and the Russian Far East. The hope is that the whole experience is sociable, and the ship’s officers host dinner parties to ease the introductions.

It is sly marketing to refer to this jolly as an expedition, but every landing was led by well-informed naturalists who would explain why these economically barren islands – a world heritage site since the 1950s – are so important.

Lying 600 miles off the Latin American coast, nature in the Galapagos has been left to itself, with tortoises growing to the size of cattle, and daisies becoming the size of trees. It was a process of ‘gigantism’ that took millions of years, and was the subject of one of the excellent evening lectures. Another concerned the minimal human history of the Galapagos – the Spanish discovered them early in their conquests but quickly left. Thereafter, the islands were spared very much attention from mankind.

Darwin figures hugely in the Galapagos story, although he stayed for only five weeks, arriving on board HMS Beagle.

It served as a floating post-graduate course, with a crew all under the age of 30 and commanded by the highly intelligent Robert FitzRoy.

The Galapagos demonstrated in sharp relief to Darwin how species of plants and animals evolved slightly differently on the islands .

But his views on natural selection and survival of the fittest had already taken seed. When On The Origin Of Species was published 20 years later in 1859, FitzRoy, a devout Christian, was among those appalled by what he read.

Bible-reading literalists might argue over evolution, but they would not dispute that Darwin’s legacy has hugely helped spare the flora and fauna of the Galapagos.

Ecuador is determined to preserve them – and the key is keeping people out.

Only 35,000 people live on the Galapagos, although that number has tripled since the 1990s.

Immigration is strictly controlled – residence is granted only after ten years of marriage to a local – and tourists have to pay $100 to enter (that sum is due to double).

Some intrepid backpackers do make their way here, but to see very much they need to hire boats for five days or so, with prices starting at about $1,000 a week.

Tourism, especially the high-end tourism of the Silversea sort, is what supports the human inhabitants of the Galapagos, and probably ensures a future for the wonderful wildlife, too.

You could argue that this means the islands become an ecological theme park for the well-heeled. But what is the alternative?

It is not as though man was consciously respectful of preserving the islands in the past. And he is only going to do so in the future if there is a strong reason to.

You don’t need to work out the theory of natural selection to see that.