A nine-year-old girl can finally hug her mother after a rare, deadly skin disorder saw her virtually burned alive and stripped of 65 per cent of her skin.

A far cry from the smiling schoolgirl her family knew her as, she ended up lying in hospital covered in blisters, with her life hanging in the balance.

The youngster had contracted Stevens-Johnson Syndrome, a rare but serious disorder affecting the skin and eyes, which doctors are baffled as to how she contracted.

Finally home after a 40 day stint in hospital, Phoenix has gone from strength to strength after a tissue transplant from her mother saved her sight. 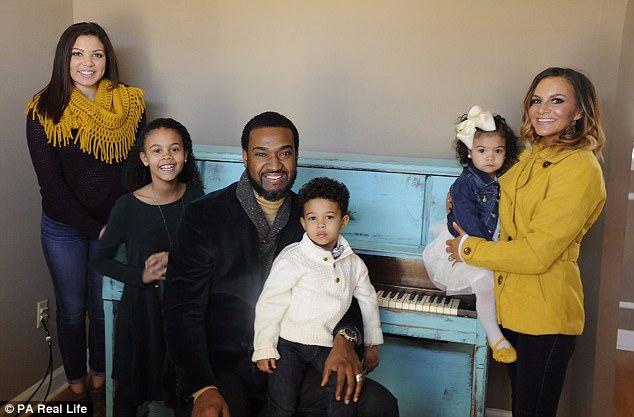 WHAT IS STEVENS-JOHNSON SYNDROME?

Stevens-Johnson Syndrome is a rare condition that arises from the immune system over-reacting to an infection or medicine.

Symptoms include blistering and peeling of the skin, and surface of the eyes, throat and mouth.

Many often initially complain of headache, joint pain and a cough.

Most patients fully recover but may be at-risk of another attack.

‘We had no idea if she’d survive’

Ms Richey, who works in a local church, said: ‘At the height of everything, we were just taking things hour by hour. Blisters were popping up all over Phoenix’s body, and we had no idea if she’d survive.

‘She’s been so brave. She’s found strength in the outpouring of love in our local community, and through her friends.

‘She’s so resilient, and makes the best of everything. Of course, she has her down days, but we’re all here to encourage her.’

On January 7 this year, Ms Richey spent the day with her pastor husband Joey, 40, their daughter Judah, two, son Izrael, three, Phoenix, and her daughter from a previous relationship, Brooklyn, 19.

The following morning, Phoenix woke with a sore throat, leading her mother to consult an out-of-hours doctor, who dismissed it as flu and gave the youngster some medicine.

Yet, later that day, Phoenix’s skin began to swell and her temperature soared.

Worried, her mother took her to the emergency room of nearby Huntsville Hospital for Women and Children.

Ms Richey said: ‘I was taking pictures all day and the change in Phoenix was rapid. From the time stamp on them, I know this was nothing to do with the medicine she took, as she’d already started to swell-up before that.

‘At hospital, she deteriorated very quickly. She was taken to intensive care to be checked over. Doctors told me it’d be around 30 minutes, but then they came back to say she was in critical condition and may not survive.

‘Having to sign consent paperwork so my daughter could be put under anesthesia was horrendous.’ 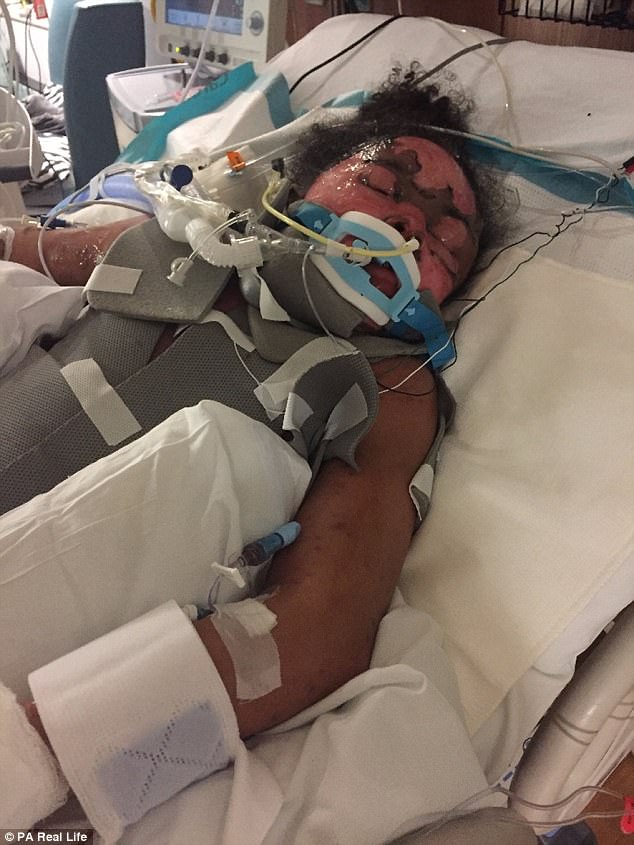 She ended up lying in hospital covered in blisters, with her life hanging in the balance 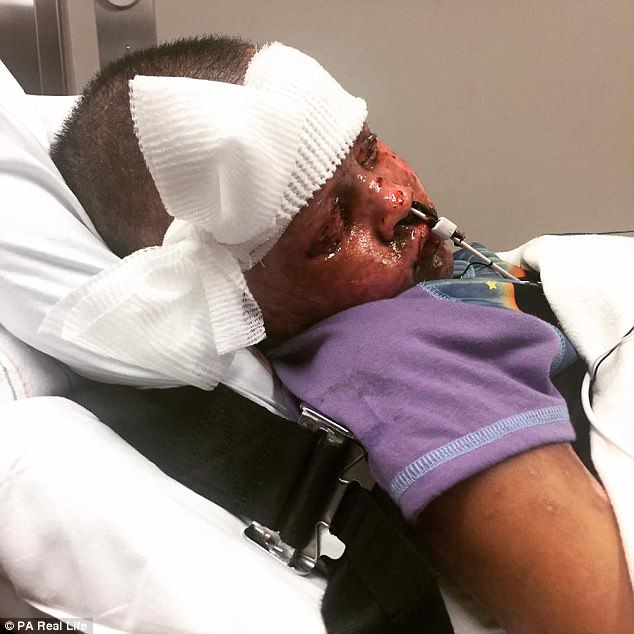 The youngster had Stevens-Johnson Syndrome, a rare disorder affecting the skin and eyes 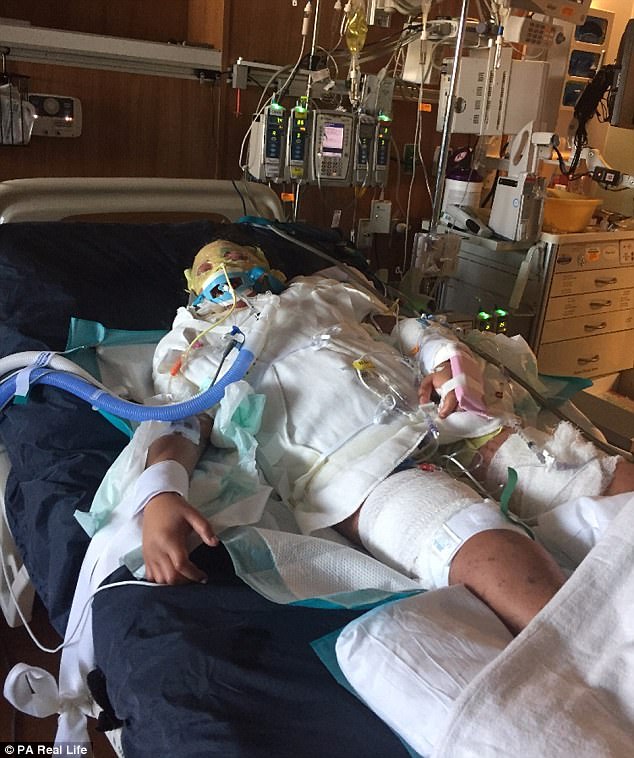 Home after 40 days in hospital, Phoenix’s sight was saved by a transplant from her mother 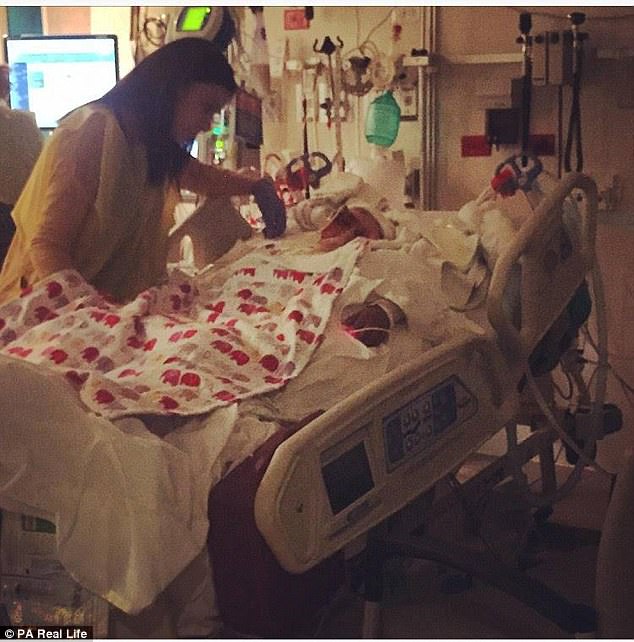 When Phoenix first woke with a sore throat, a doctor dismissed it as flu and gave her medicine 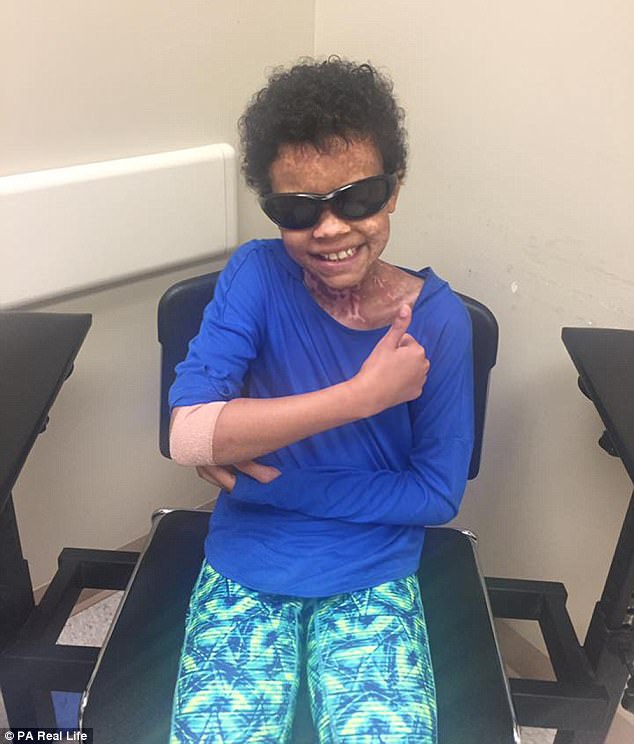 Within hours, the youngster’s temperature soared and her skin began to swell and peel

As baffled doctors tested Phoenix for a string of conditions, she grew steadily worse and her skin started peeling away.

On January 10, she was taken by helicopter to Children of Alabama Hospital in Birmingham, where a dermatologist diagnosed Phoenix with Stevens-Johnson Syndrome.

Ms Richey said: ‘I’d never heard of it before. I was told not to Google it.’

After a week, Phoenix was flown to Shriners Hospital for Children in Cincinnati, Ohio, for more specialized treatment.

Over the next 40 days, she was rotated around the three hospitals, while doctors attempted to treat the infection taking over her body.

Ms Richey said: ‘At first, she swelled-up so much, it looked like she’d been beaten. Visitors to the ward didn’t even recognize her.

‘Then, her skin blistered and began to weep. She lost all her pigment, which we were told would be the longest thing to come back.

‘Doctors also had to shave her hair to check if the Stevens-Johnson Syndrome was affecting her scalp, too. They saved it for me and put it in a bag, which made me cry.

‘I’d been so strong up until that point, like a computer, just taking in information. But Phoenix’s hair was her pride and joy. I broke down knowing she’d lost it. We knew at some point she’d ask to see her reflection, which would be a difficult time.’

With virtually no skin left, Phoenix was at a very high risk of infection.

Doctors swaddled her in gauze dressings, which were changed every three days.

Her mother therefore donated stem cells to Phoenix’s right eye to save her sight, yet her vision is still not what it was.

Ms Richey said: ‘She’s so strong. She’ll watch old movies she’s already seen, so she can listen along and picture what’s happening. She likes to solve problems and figure everything out for herself.’

As Phoenix continues to recover, the youngster’s whole school gathered outside her home to sing happy birthday to her.

Ms Richey said: ‘She was so excited. All the kids treat her exactly the same as they always have.’

Phoenix’s family are fundraising for the ongoing cost of her care, including specialist prescriptions and appointments to monitor her organ function. Donate here. 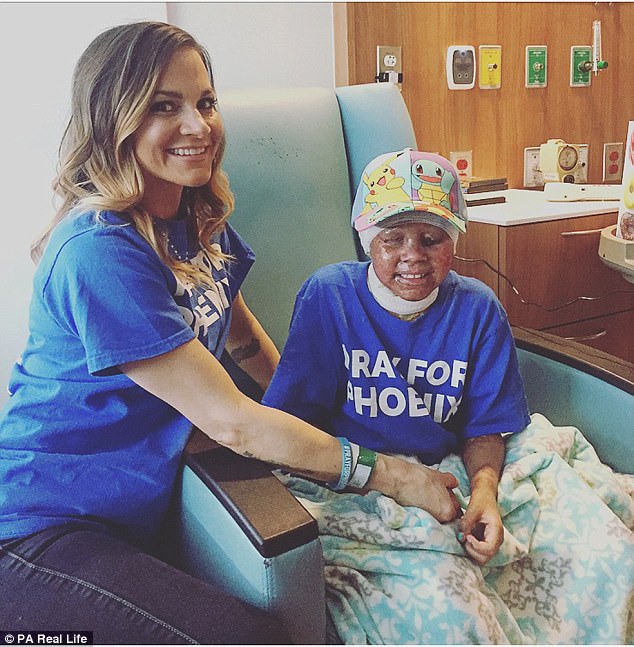 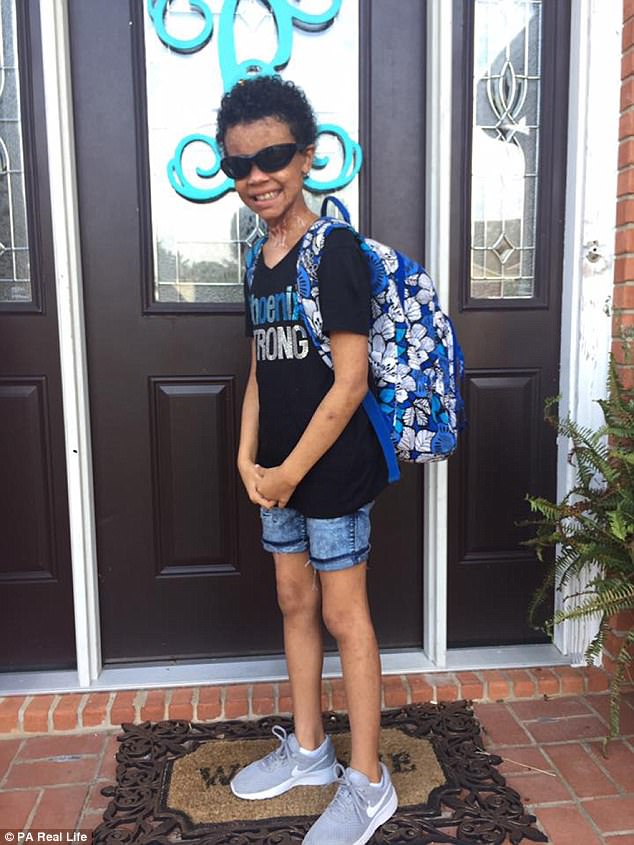 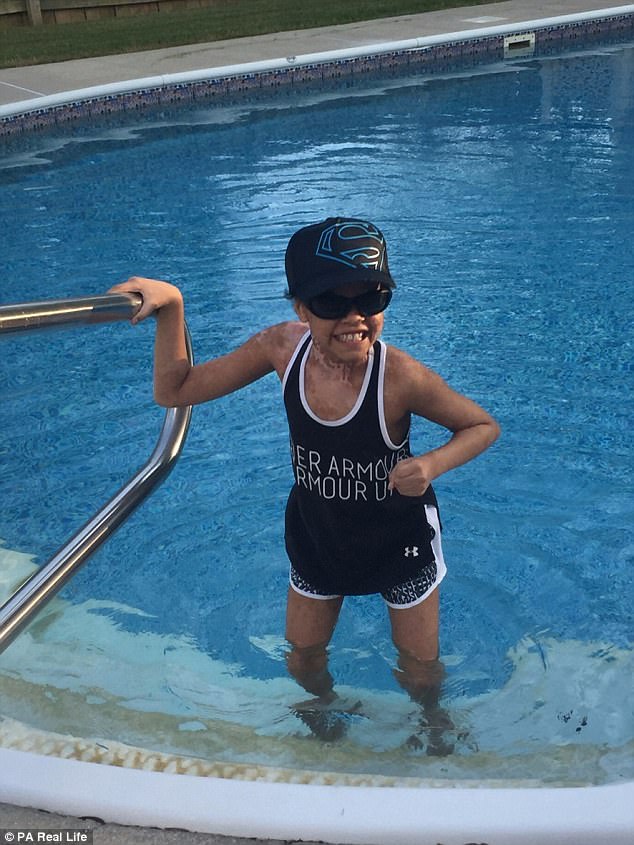 Despite receiving a tissue transplant from her mother, Phoenix’s vision is still not what it was 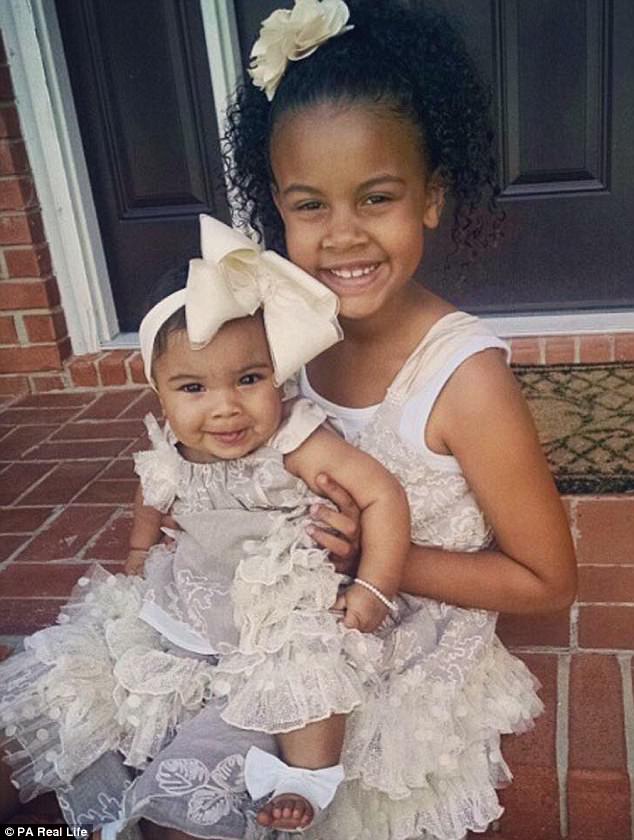