Pink and her husband Carey Hart took to their Instagram accounts on Wednesday to celebrate their daughter Willow’s tenth birthday.

The 41-year-old hitmaker was seen spending time with her kid in an arena space while her spouse, 45, shared several photos and a video, all of which featured the couple’s first child.

Special occasion: Pink and her husband Carey Hart took to their Instagram accounts on Wednesday to commemorate their daughter Willow’s tenth birthday

The happy parents originally tied the knot five years before they welcomed Willow into their lives and also share a son, whom they welcomed in 2016.

Pink kept it comfortable as she spent time with her daughter in the photo, where she wore a black athletic top paired with a matching set of leggings.

The hitmaker, born Alecia Moore, added a few elements of pop to her outfit with a yellow flannel shirt that was kept around her waist and multicolored neon socks.

The Raise Your Glass singer wore a pair of round sunglasses and covered up a majority of her luscious blonde hair with a black bandana. 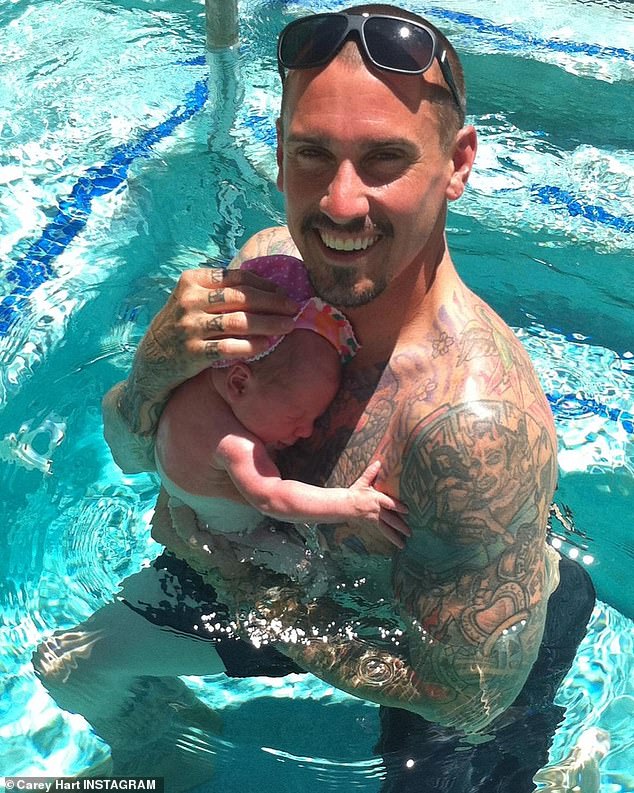 Looking back: While the singer only shared a single photo featuring her eldest child, her spouse posted several snaps that had been taken over the years 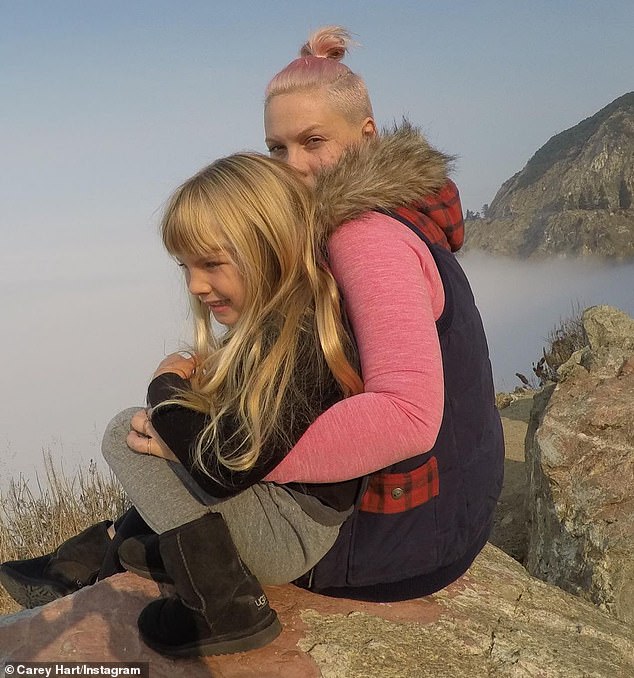 Getting honest: Both of the happy parents wrote messages directed at their daughter in the captions for both of their posts

Hart’s photos all showed Willow at various points of her life as she embarked on activities such as BMX riding and wakeboarding.

One of the former professional freestyle motocross rider’s shots showed his daughter spending time with her mother as they sat on what appeared to be the side of a mountain.

The athlete also wrote a lengthy message directed at his eldest child in the post’s caption, where he expressed that she had helped him learn certain things that have served him well as a parent. 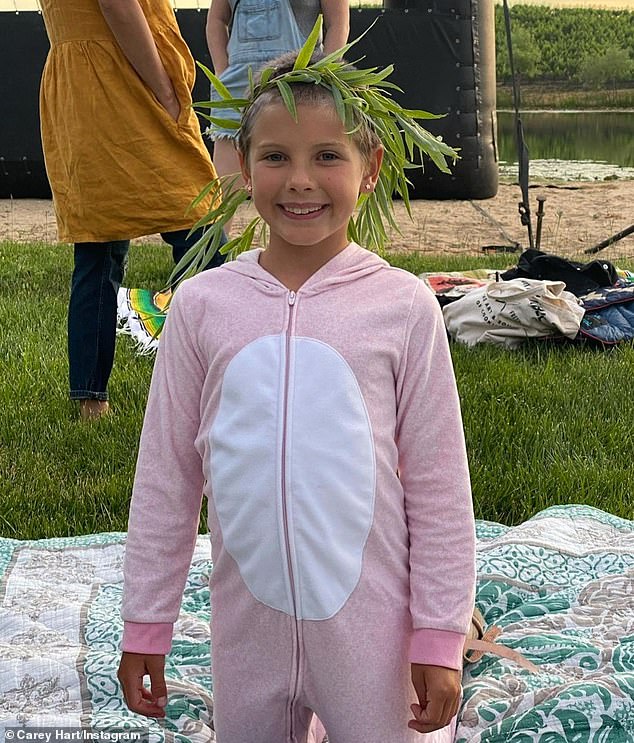 Proud parent: Hart wrote that Willow had ‘taught me instant love’ and that his eldest child was ‘the love of my life’

He also remarked that, although his daughter was moving through her life quicker than he expected, he was confident that she would mature into a well-intentioned human being.

‘You are growing up way to fast. But because you have an amazing mother and myself, I can’t wait to see the strong and independent woman you become. I love you,’ he wrote.

Pink and Hart initially met in 2001 and dated for several years before the singer proposed to her now-husband during a motocross event in 2005.

The two went on to tie the knot during a beautiful ceremony in Costa Rica that was held the following year, although they eventually separated in 2008. 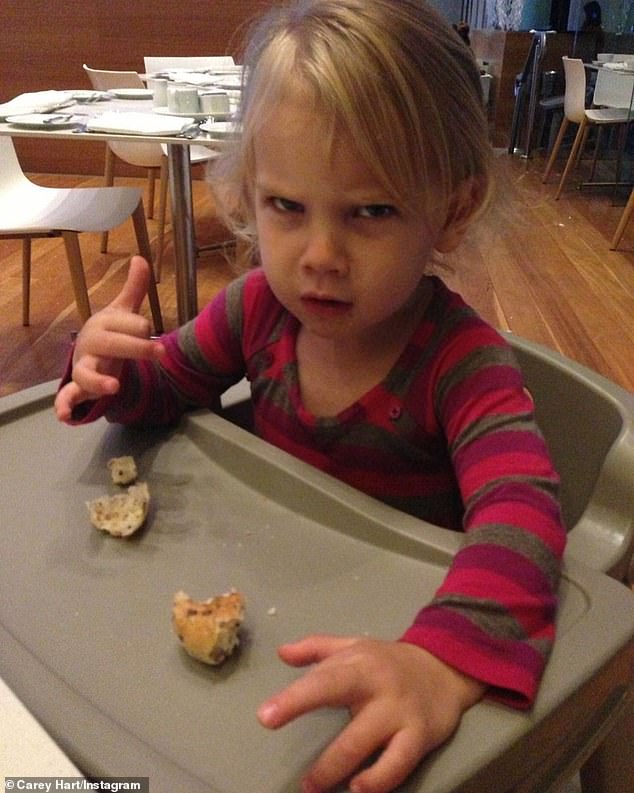 Great expectations: The former professional motocross rider also wrote that he foresaw Willow growing up to become a ‘strong and independent woman’

The couple remained close during their period of estrangement, and they reconciled the following year after attending marriage counseling.

The pair welcomed Willow in June of 2011, and they went on to add a son named Jameson Moon, aged four, to their family in 2016.

Pink elaborated on how she balances her responsibilities as a parent and as a performer during an interview with People, where she revealed that other singers looked up to her as a model for parenting while embarking on a musical career. 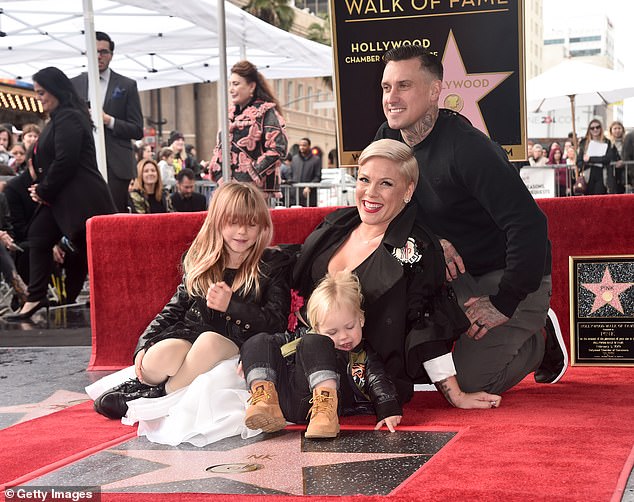 Staying strong: Pink and Hart tied the knot in 2006, and although they experienced a brief period of estrangement in 2008, they eventually reconciled the following year; they are seen with their children in 2019

‘Touring with kids is impossible — and I did the impossible.

‘For a while there were a lot of other pop stars that were emailing me and calling me for the playbook on how to tour with kids, so I wrote a playbook for other moms,’ she said.

The So What singer also noted that she was grateful to be a parent and that she had grown used to the difficulties that are associated with raising young children while speaking with the media outlet.

‘They’re totally weird and joyful, and I’m loving every moment of it…Even the hard days are a blessing,’ the singer remarked. 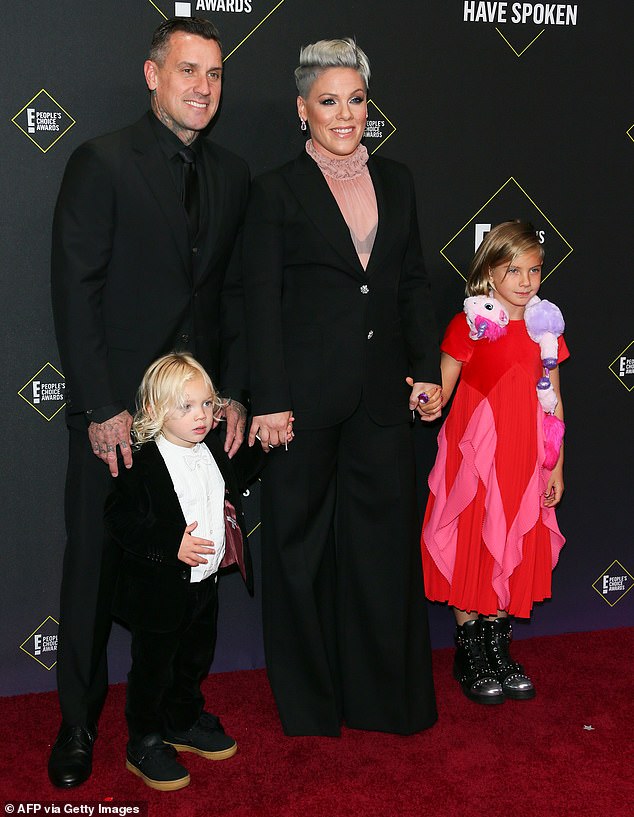 Solid techniques: During a recent interview with People, Pink expressed that she ‘wrote a playbook’ for other performers who were raising children; she is seen with her family in 2019