A Dutch delight: Rotterdam is bursting with dazzling architecture and fabulous food

A choice. Have afternoon tea at The Ritz in London for £58. Or take a morning Eurostar train to Rotterdam and walk to a cafe called Lof der Zoetheid.

Your table will be groaning with sandwiches, huge homemade cakes and fabulous scones (who knew the Dutch could out-scone us?) And you get to sit at a table on a pleasant tree-lined street next to a canal. Total cost: £56.41.

You’ll need another £35 to get straight back to St Pancras. So you could always stay a little bit longer.

The new and old buildings of Rotterdam, which is divided by the Nieuwe Maas river

Holland’s second city is a more likely venue for stag parties than afternoon teas. It’s a port city where they like their drink, football and thumbing their nose at the posh people from the capital Amsterdam.

When footballer Dirk Kuyt exchanged Rotterdam for Liverpool I bet he felt perfectly at home.

But I’m at that awkward age — too old for stag parties, too young for afternoon tea. What else could the place offer? My first impressions were that the new station building looked like a giant potato chip buried in the ground, and that I was in Coventry. That’s no coincidence. Six months apart in 1940, both cities were pounded into pieces by the Luftwaffe.

Unlike Coventry, Rotterdam has since gone architecture mad. If you love to contrast your Brutalism with your post-modernism, this is your place. 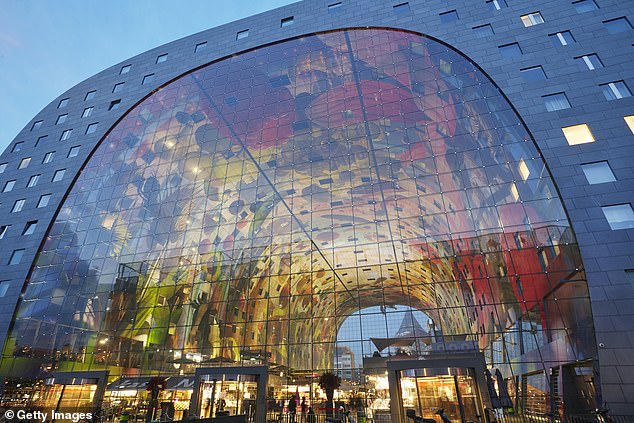 ‘A giant metal and glass Swiss roll’: The Markthal is the Netherland’s largest indoor market

There’s the good, the bad and the plain weird. Markthal, the Netherlands’ biggest indoor market, is like a giant metal and glass Swiss roll — executive-style flats on the outside; the filling a hall stuffed with street food stalls and, below, a 4,000-tile mural of floating fish, ducks, raspberries and grapes.

Opposite is Rotterdam’s unloved ‘pencil’ building — more half pencil, half Dalek — and next to that the structure most popular with visiting Instagram addicts.

The yellow and grey ‘cube’ flats seem to be plonked on their side, so that one window is at eye level, the next by your feet. 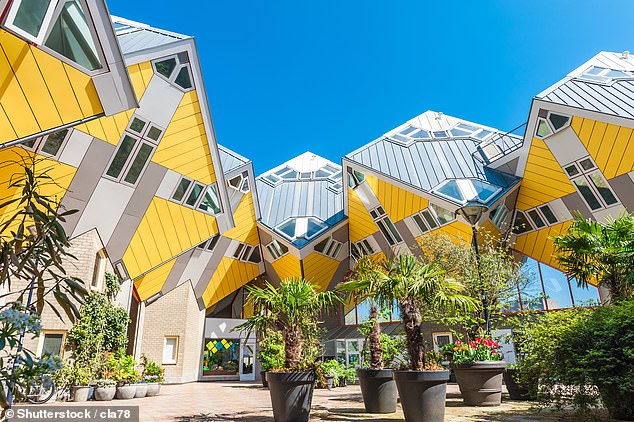 The cube houses (or Kubuswoningen) were designed by architect Piet Blom

But the real joy of Rotterdam is its older design heritage.

At the height of its pre-war prosperity, the Van Nelle coffee, tea and tobacco company opened a factory on reclaimed land just beyond the centre.

The grey-cream assembly of warehouses, chimneys and offices joined by oblique glass walkways is a thing of grace and beauty. It’s now inhabited by design and architecture practices (there’s lots of work for them around here).

One of Van Nelle’s directors, Albertus Sonneveld, was so taken with the Nieuwe Bouwen (Dutch Bauhaus) style that he asked the architects to build him a villa in town. 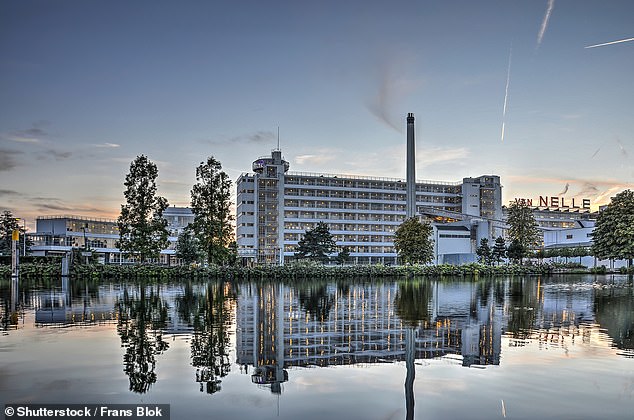 The Sonneveld house survives because it’s just beyond the ‘fire boundary’ — the residential areas spared by the Blitz.

In the Maashaven harbour there is historical glamour of a different kind and era.

The SS Rotterdam first set sail for New York 60 years ago. Its passengers were American high society of the Sinatra era — Europeans couldn’t afford the £15,500 first-class tickets. When the New York service became uneconomical, the Rotterdam became a cruise ship. In 2008, it retired to its home port. 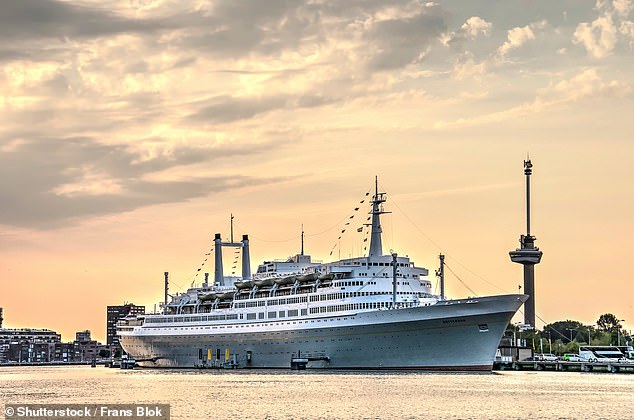 High up on the deck of the 46,000-ton colossus, you can gaze at Kop van Zuid, the dockland area where the next chapter of Rotterdam’s story is unfolding — galleries, art projects and rediscovered classics — like the refurbished Hotel New York, the building where Dutch emigres set sail for America.

Below decks on the Rotterdam, the restored ship doubles, or trebles, as a meetings venue, hotel and floating museum. We were shown around the lounges, bridge, captain’s quarters and the plush little theatre.

Our guide, a gruff seventy something ex-marine, was a pretty good entertainer himself.

Dinner in the Club Room restaurant was excellent. But you can’t help wondering why the owners, a Dutch hotel group, don’t turn the whole ship into a properly swanky hotel. Maybe swankiness just isn’t in Rotterdam’s genes.

Eurostar (eurostar.com) London to Rotterdam from £35 one way. You’re required to change in Brussels on the return journey. B&B doubles at the Rotterdam Marriott (marriott.co.uk) from £91. More information at rotterdammakeithappen.nl.