‘Top up?’ inquired my husband, as we sat on the sun-dappled terrace.

It’s hard to think of a nicer question. Especially when asked on a balmy afternoon in Beaune, the unofficial capital of Burgundy’s Côte-d’Or region, where we were simply doing what the good people of this dignified town do best – savouring one of their world-class wines.

The promise of a trip to Center Parcs at the end of the week had just about won the children round to the idea of a driving holiday to France first.

A picture of vineyards around Beaune, a town that’s rightly regarded around the world as a fine-wine mecca 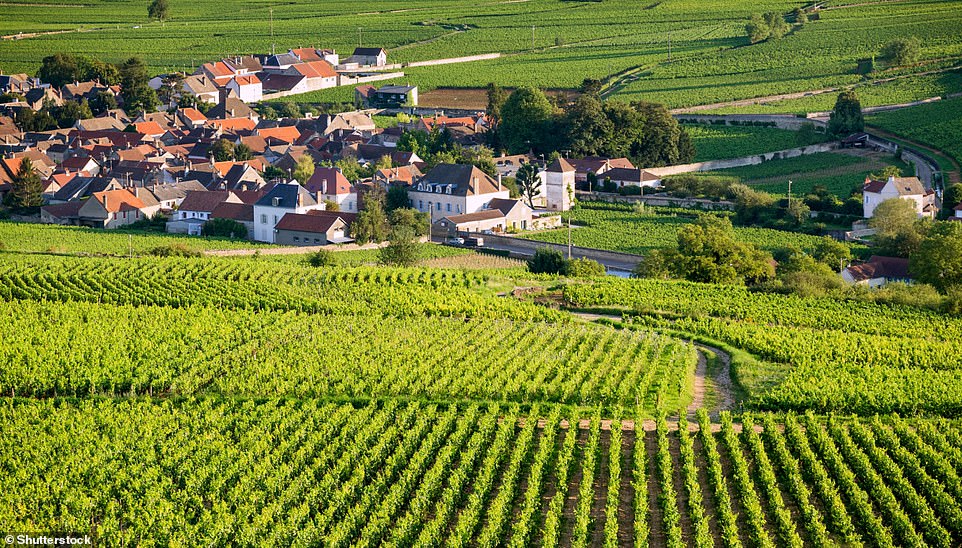 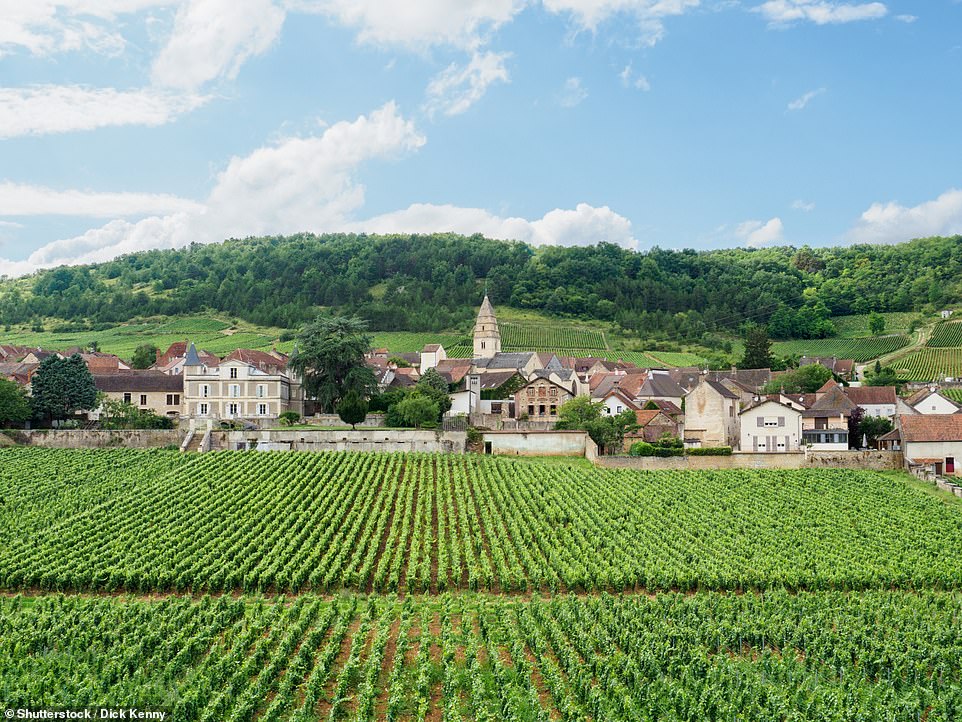 The village of Saint-Aubin, which lies to the south-west of Beaune. The vineyards in Burgundy mainly make chardonnays and pinot noirs – some of the best anywhere in the world

The indignities of Aqua Mundo awaited. But for now, civilisation was ours.

And few places do civilisation quite so convincingly as the Hostellerie de Levernois, an immaculate Relais & Châteaux property ten minutes outside Beaune.

During our luncheon pit stop aperitifs of Cremant de Bourgogne were followed by plates of jambon persille and poached eggs in Chardonnay – a twist on the traditional Burgundian Oeufs En Meurette – washed down with a Ruilly Premier Cru.

Oh, to be in Burgundy, the land where lunch is king. And a land that makes some of the best chardonnays and pinot noirs on the planet.

It is a source of amazement that not more Brits make the area a holiday destination in itself, stampeding past this Epicurean dream to the sweaty flesh pots of the coast.

Irresistible reds to the north, winsome whites to the south. The only dilemma is how to narrow down the dizzying possibilities. 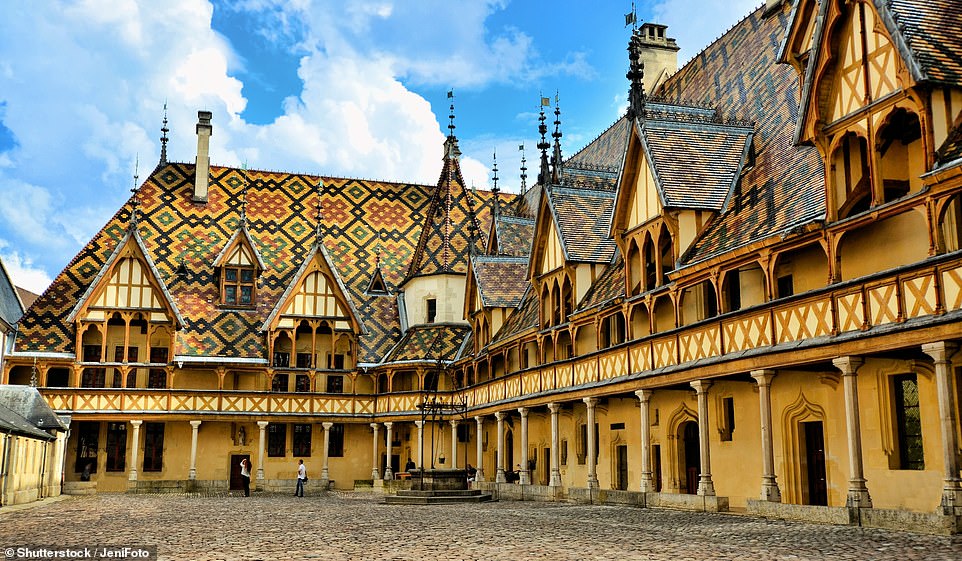 The multi-coloured tiles of Beaune’s landmark Hospices de Beaune. The charitable almshouse was founded in 1443 as a hospital for the poor. It is one of France’s most prestigious historic monuments 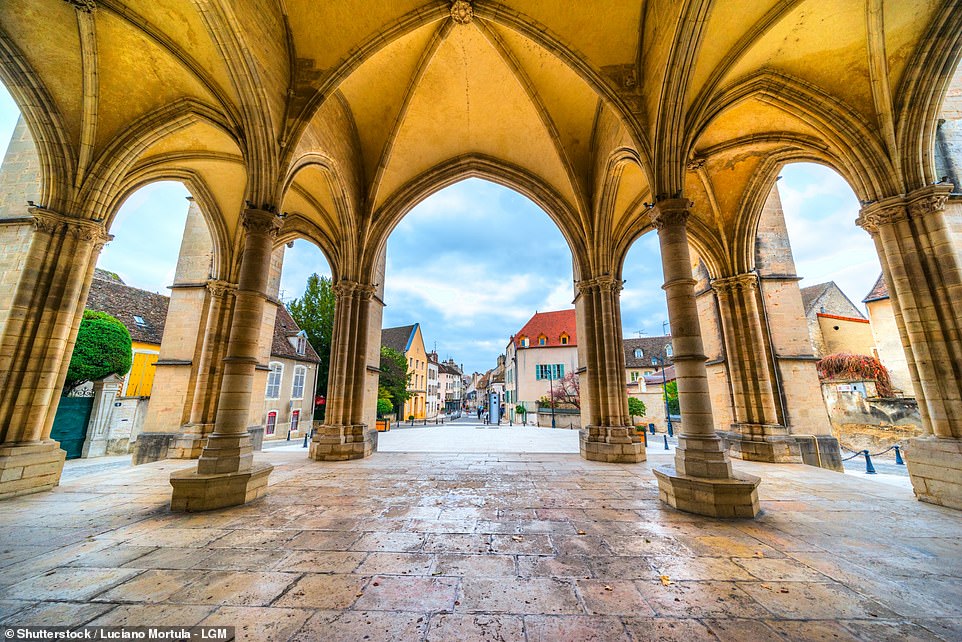 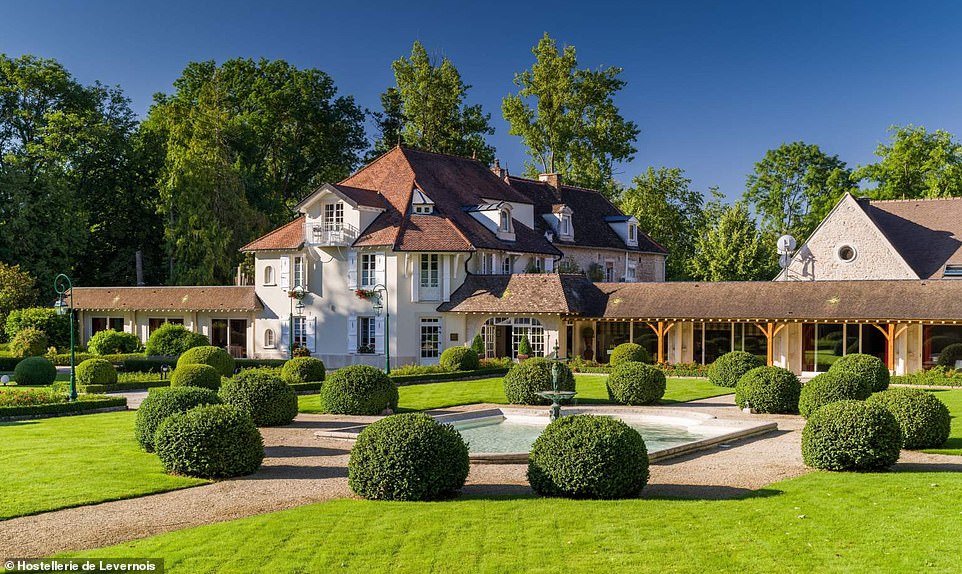 Outdoorsy types favour the veloroute, arguably the world’s most wonderful bicycle trail that winds through the picture-perfect vineyards of Pommard, Volnay, Mersault, Puligny-Montrachet and Chassagne-Montrachet before ending up in Santenay.

But why sip, spit and cycle when you can load up the roof box and drive as much of the stuff back home as you can?

Well-thumbed Michelin map to hand, we knew exactly where we were headed: Macon and the mothership, otherwise known as the vineyard of Paul Talmard, source of the fantastic white Burgundy we buy by the crate load (when on special offer) from Suffolk brewery Adnams.

Be sure to check opening hours in advance. On both our visits (we quickly realised our initial five boxes of Macon Uchizy would need serious supplementing if it were to last to Christmas), we arrived to find it closed for lunch.

Thankfully, desperation is a universal language and, after repeated ringing of the bell followed by shouting from a window, Madame Talmard emerged, muttering as she unlocked the door. Her exasperation – and eyebrows – soon lifted. 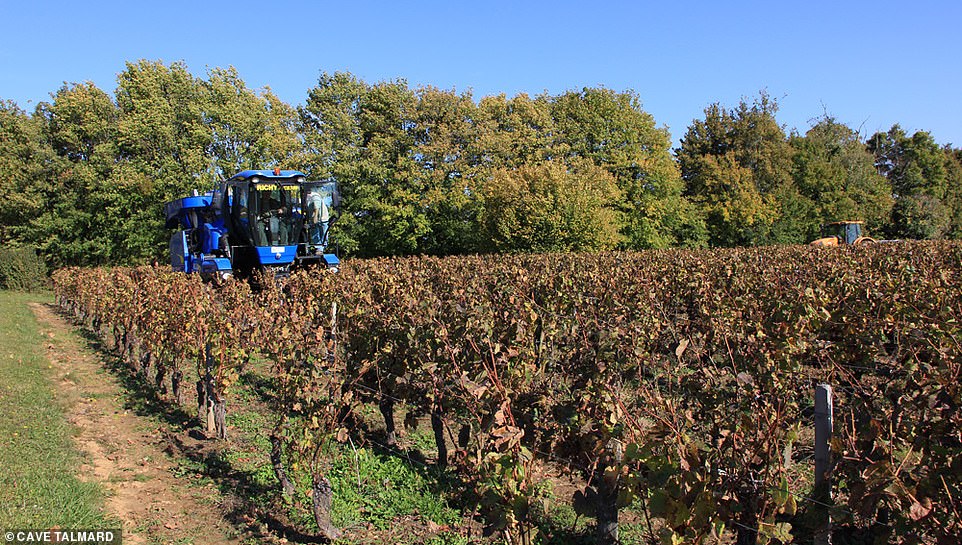 During her trip, Fiona stopped at the vineyard of Paul Talmard and loaded the car up with 20 crates of her favourite wine 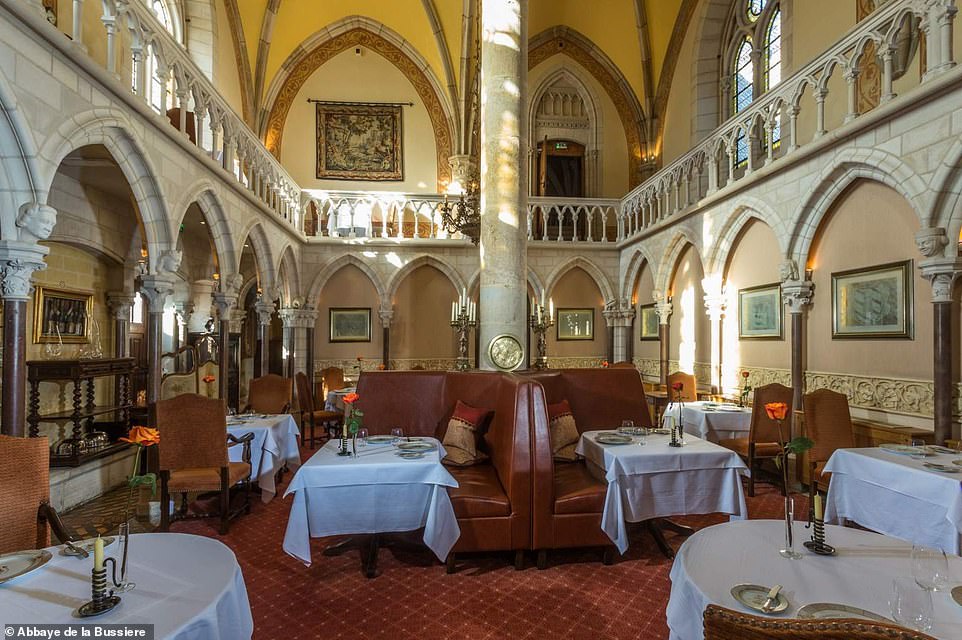 The impressive dining room at Abbaye de la Bussiere, a former 12th-century Cistercian abbey-turned-hotel, 30 minutes outside Beaune. The restaurant is installed beneath the vaulted arches of the former cloister

‘Quinze?’ she repeated. I glanced at my husband. Were 15 crates too many? ‘Better make it vingt,’ he said.

Not since Mr Weasley’s ill-fated Ford Anglia prized Ron and Harry from a forest of man-eating spiders has a car risen so spectacularly to the occasion. It was as if our Volvo XC90 had suddenly discovered its reason for being.

Next stop the Vins Auvigue and their fabulously flinty Pouilly Fuisse Chailloux, a bottle that would not disgrace itself at the expensive end of a wine list.

Several crates of their stunning Saint Veran also found their way into the footwell. By now, the car was groaning. As were the children.

Back to Beaune and the perfect base – Les Jardins de Lois, a handsome B&B with an extensive garden just outside the city walls.

Owners Ann-Marie and Philippe Dufouleur have tastefully renovated this noble old building and are the friendliest of hosts. 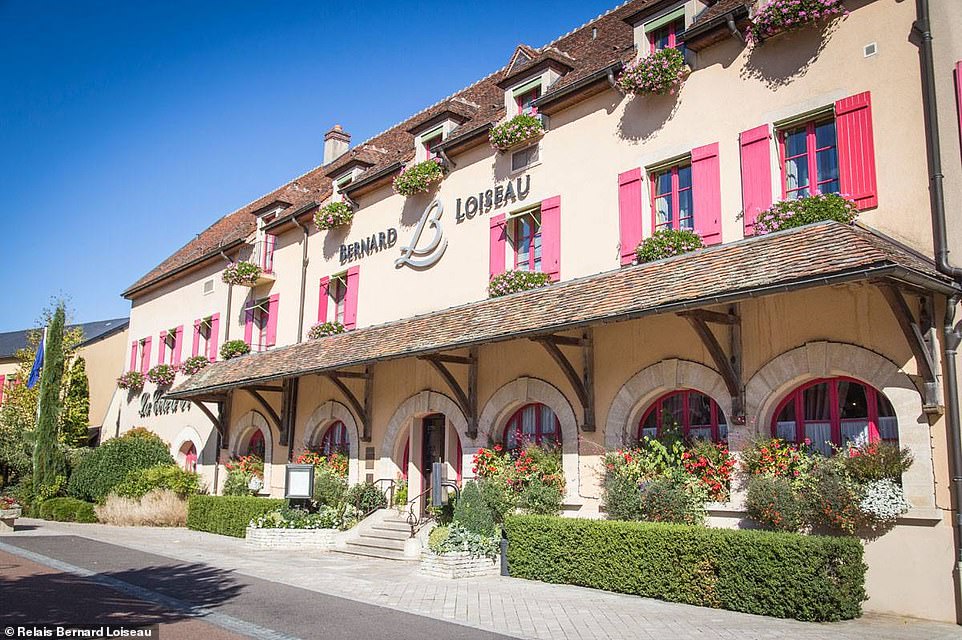 Fiona said she ‘saved the best to last’ – a visit to Le Relais Bernard Loiseau in the market town of Saulieu. It is named after its former three-Michelin-starred head chef, who tragically ended his own life in 2003 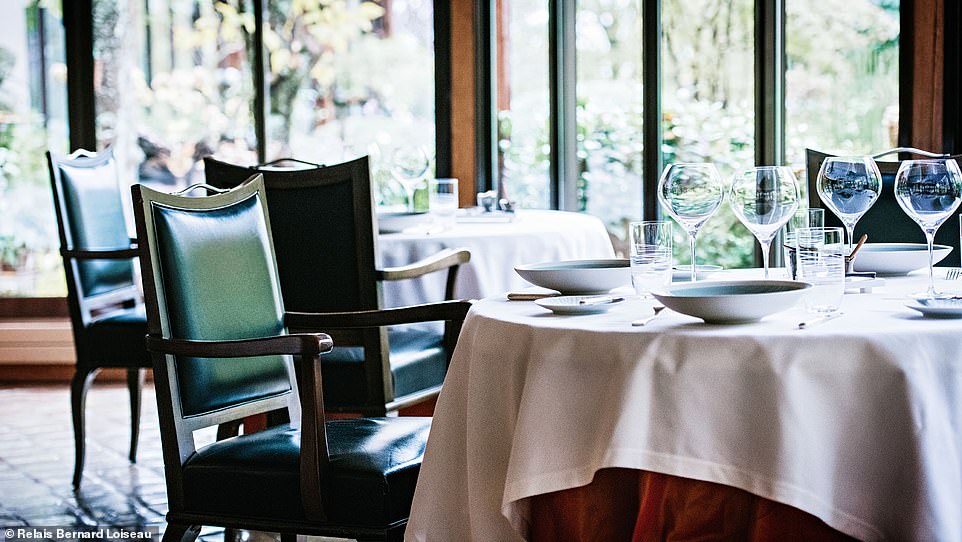 The rooms are large, airy and comfortable. We took the top-floor suite – from where the multi-coloured tiles of the city’s landmark Hospices de Beaune could be seen glinting in the evening sun – and could have happily stayed for the week.

Two double bedrooms, a stylish sitting room and spacious kitchen – equipped with washing machine, tumble dryer and microwave – make it the perfect base for a family of five.

There’s also parking in the courtyard – essential for the cellar on wheels.

A five-minute stroll into the cobbled streets of the city and dinner at Ma Cuisine, a favourite with oenophiles due to the marginal mark-ups on its extensive wine list.

The following day we clear our heads with some country air and the august surroundings of Abbaye de la Bussiere, a former 12th-century Cistercian abbey, 30 minutes outside Beaune.

A gravel drive loops round a landscaped park and lake to the fairytale entrance where friendly English staff – owners Clive and Tanith have brought a fair bit of Blighty with them to Burgundy – make guests feel instantly relaxed. Bottles of cassis and baskets of blueberry cakes in the bedrooms have a similar effect.

All the more puzzling, then, to find its gastronomic restaurant so stilted.

For while there was no doubting the flair behind the dozens of dishes solemnly delivered to our table, there was no escaping the fact that it was like eating in a crypt.

Perhaps the ecclesiastical setting was to blame – after all, bread and wine are all very well, but a waitress talking you through a cheese trolley in a deconsecrated dining room was strangely unsettling.

We saved the best until last – the Bernard Loiseau in the market town of Saulieu. Here, Dominique Loiseau, widow of the visionary chef, not only continues his unique brand of magic but creates plenty of her own.

There is no mistaking the labour and love that have gone into creating this outstanding hotel. No detail is too small to escape the attention of Madame Loiseau, whose understated perfection is everywhere.

And at the heart of it all, a world-class dining room I’d drive the length of France to get to.

‘Vivre la cuisine!’ exclaimed head chef Patrick Breton, as he presented our three children with chefs toques at the end of an unforgettable night.

As a blueprint for Burgundy perfection, Bernard is still the one to beat.

The town has long been a stopping place for travellers making their way between the north and south.

It’s sited on a major communications route built by the Romans, called Via Agrippa.

In the Middle Ages it was called the Grand Chemin, then it became Route Royale, Route Impériale, Grande Route, Nationale 6 and, today, the D906. 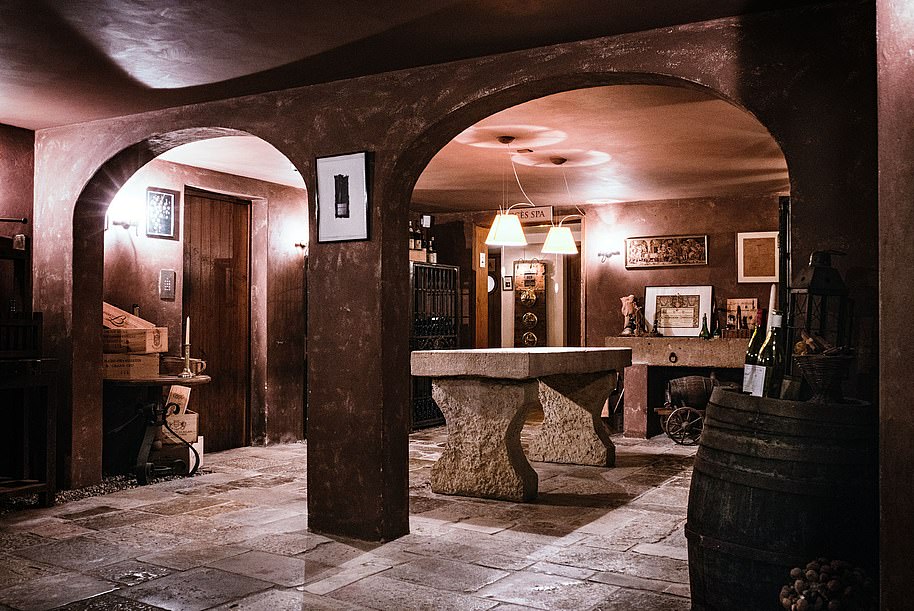 The hotel is organised on four levels. The corridors, paying homage to the Saulieu sculptor François Pompon and the painter Bernard Buffet, overlook the street, while the rooms overlook the garden 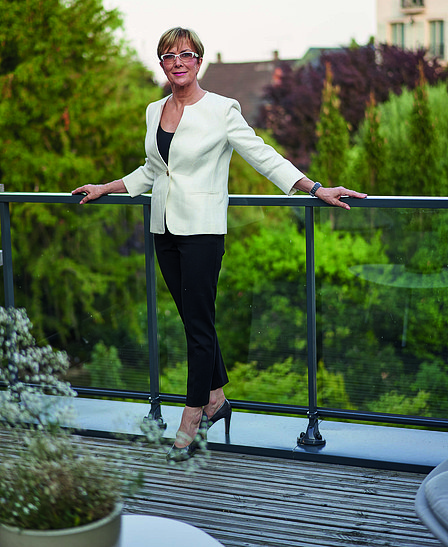 Dominique Loiseau, pictured, was appointed Vice–President of Relais & Châteaux in 2005. She was the first woman to be appointed to the position

The property used to be a coaching inn, then it became La Côte d’Or Hotel.

The couple equipped the hotel with all the period’s most modern conveniences, including central heating and bathrooms.

Their chef was Jean-Baptiste Monin and when the system of restaurant stars was created in the Michelin Guide in 1926, his talents won La Côte d’Or one star.

Alexandre Dumaine’s reputation was such that he was nicknamed the ‘the king of cooks’.

They all signed the guests’ book. At one point it contained over 30 years of history, enhanced with drawings, paintings and photographs.

But after a guest wrote an acerbic comment in the book it was burned by Alexandre Dumaine in his oven.

From 1963 to 1975, François Minot was at the helm. Claude Verger then decided to buy the restaurant and appointed his promising protégé, the young Bernard Loiseau, as chef.

At the age of 24, with his head filled with dreams and an ambition as big as his heart, the chef made his name synonymous with the legendary Côte d’Or restaurant, as the craftsman behind its wonderful renaissance.

From the summer of 1990, renovation work was carried out to guarantee diners a special setting and it 1991 it won a third Michelin star back.

In 2003, La Côte d’Or was renamed the Relais Bernard Loiseau, a reminder that, since 1975, it has belonged to the prestigious Relais & Châteaux network.

Through this new name, all of Bernard Loiseau’s team paid homage to their talented chef and committed themselves to pursuing his work, under the guidance of his wife, Dominique Loiseau.