Scientists say we should try to eat local, after finding that a FIFTH of all food-related greenhouse gas emissions come from transporting it around the world.

The amount of emissions linked to lorries, ships, trains and aeroplanes carting our grub around is seven times higher than experts previously estimated.

A team from the University of Sydney studied 74 origin and destination countries, 37 economic sectors, international and domestic transport distances and food masses.

They calculated that the transportation of food causes three gigatonnes of the dangerous gasses to be released every year.

This makes up six per cent of total human-produced greenhouse gas emissions.

The scientists claim that if people only ate locally, we would save 0.38 gigatonnes in emissions – the equivalent of what would be created driving one tonne to the sun and back 6,000 times. 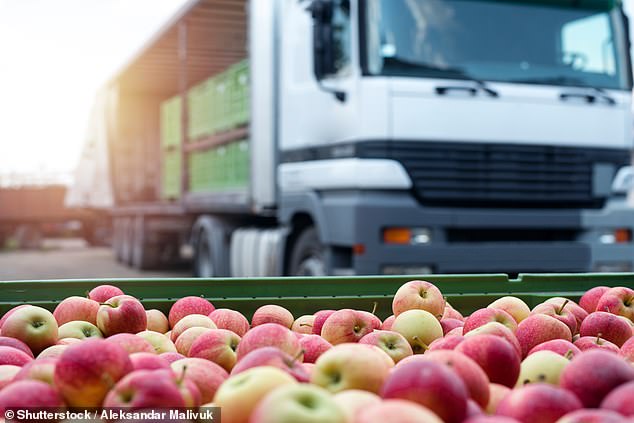 Delivery of fruit and vegetables makes up a third of all food transport emissions, releasing double the emissions in shipping as in production. This is because they often require temperature-controlled transportation to prevent spoilage while in transit

GLOBAL WARMING AND THE GREENHOUSE EFFECT

Certain gases in the atmosphere, such as carbon dioxide, trap heat similar to the glass roof of a greenhouse, and they are called greenhouse gases.

During the day, the sun shines through the atmosphere and Earth’s surface warms up in the sunlight.

At night, the Earth’s surface cools, releasing heat back into the air, but some of the heat is trapped by the greenhouse gases in the atmosphere.

Too much of these greenhouse gases can cause Earth’s atmosphere to trap more and more heat and warming up the planet.

Since the pre-industrial period, human activities are estimated to have increased Earth’s global average temperature by about 1.8°F  (1°C), a number that is currently increasing by 0.36°F (0.2°C) per decade. 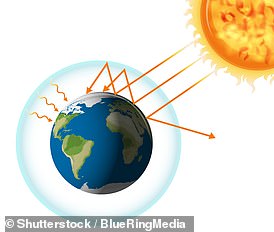 A diagram showing the greenhouse effect

The researchers used FoodLab, an organisation that supports food businesses and measures social change in food systems, to make their calculations.

The findings, published today in Nature Food, reveal that 19 per cent of food emissions come from its transportation.

This far exceeds the same figure taken for other commodities, for example, transport accounts for only seven percent of industry and utilities emissions.

Food transportation also makes up nearly half of all direct emissions from road vehicles.

Delivery of fruit and vegetables alone makes up a third of all food transport emissions.

They release double the emissions during shipping than in production, as they often require temperature-controlled transportation.

Study co-author Professor David Raubenheimer said: ‘Prior to our study, most of the attention in sustainable food research has been on the high emissions associated with animal-derived foods, compared with plants.

‘Our study shows that in addition to shifting towards a plant-based diet, eating locally is ideal, especially in affluent countries.’

The researchers say their findings mean people must make it a priority to eat locally-grown produce whenever possible.

China, the United States, India, and Russia are the top food transport emitters, demonstrating that rich countries are disproportionate contributors.

Wealthy countries such as the United States, Germany, France, and Japan constitute 12.5 per cent of the world’s population yet generate almost half of food transport emissions. 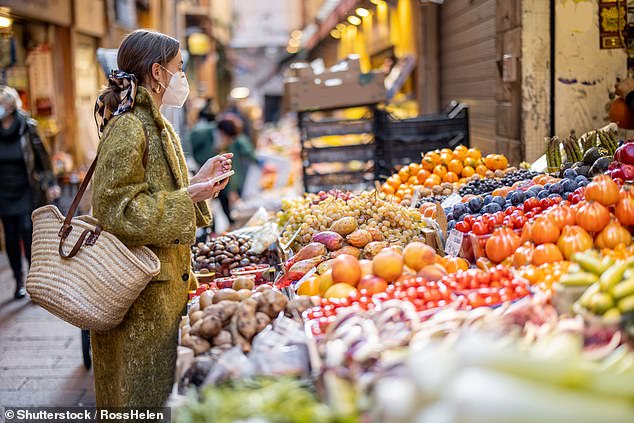 The researchers are urging consumers to change their eating habits, such as by not eating food out of season. Professor Raubenheimer said: ‘Changing consumers’ attitudes and behaviour towards sustainable diets can reap environmental benefits on the grandest scale.’

The team say that the people and governments of these countries should take more steps to reduce the amount of imported food they eat to help mitigate the damage.

They say governments should also invest in cleaner energy sources for vehicles and incentivise food businesses to use less emissions-intensive production and distribution methods, such as natural refrigerants over synthetic.

Consumers should also change their eating habits, such as by not eating food out of season, if the situation is going to change, the researchers claim.

‘Eating local seasonal alternatives, as we have throughout most of the history of our species, will help provide a healthy planet for future generations.’

Four key climate change indicators reached record highs last year, according to the State of the Global Climate in 2021 report from the World Meteorological Organization (WMO).

Greenhouse gases reached a new global high in 2020, when the concentration of carbon dioxide (CO2) hit 413.2 parts per million (ppm) globally, or 149 per cent of the pre-industrial level.

The global annual mean temperature in 2021 was around 1.11 ±0.13 °C above the 1850-1900 pre-industrial average, less warm than some recent years owing to cooling La Niña conditions at the start and end of the year.

The upper 2,000m depth of the ocean continued to warm last year and it is expected it will keep doing so in the future — a change which is irreversible on centennial to millennial time scales.

All data sets showed a particularly strong increase in ocean warming rates over the past two decades.

The warmth is penetrating to ever deeper levels, experts said, while much of the ocean experienced at least one ‘strong’ marine heatwave at some point in 2021.

The ocean absorbs around 23 per cent of the annual emissions of anthropogenic CO2 to the atmosphere.

This reacts with seawater and leads to ocean acidification, which threatens organisms and ecosystem services, and hence food security, tourism and coastal protection.

As the pH of the ocean decreases, its capacity to absorb CO2 from the atmosphere also declines.

This is more than double the rate of between 1993 and 2002 and is mainly due to the accelerated loss of ice mass from the ice sheets.

Experts said it has major implications for hundreds of millions of coastal dwellers and increases vulnerability to tropical cyclones.