After being eliminated from the World Cup by Team USA in the Group B finale, Team Iran returned to Tehran on Wednesday amid fears for players’ safety.

The team received a subdued reception after the demoralizing 1-0 defeat, a match played against the backdrop of ongoing anti-government protests in Iran, where one man was shot dead celebrating the American victory.

Dozens of flag-carrying fans greeted the players with signs reading ‘soldiers of the country’ as the team arrived at Imam Khomeini Airport early Wednesday. Despite the outward support, human rights activists have voiced concern for players, many of whom refused to sing the Iranian national anthem before the Group B opener against England. The move has been perceived as a show of support for anti-government protests.

Iran’s Portuguese coach Carlos Queiroz (C) is surrounded by fans as he arrives at Imam Khomeini Airport in Tehran on December 1, 2022 after the Iranian national team competed in the Qatar 2022 World Cup 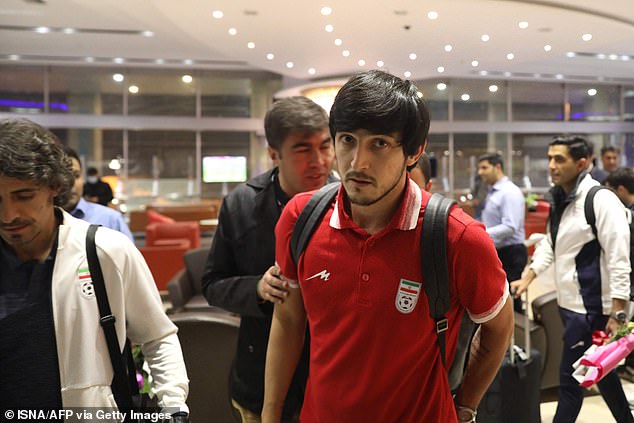 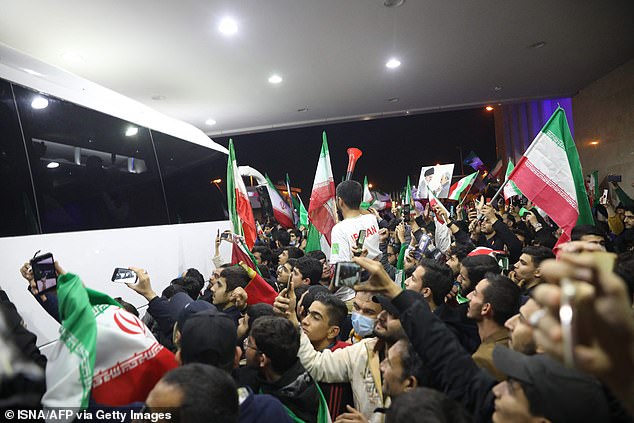 Meanwhile, many protesters consider the team a symbol of Iran’s clerical rulers, and actually celebrated the loss with fireworks and cheers. As a result, Mehran Samak, 27, was shot dead after honking his car in support of the US win after Tuesday’s match in the city of Bandar Anzali in northwest Iran. Oslo-based Iran Human Rights reported he was ‘shot in the head by state forces when he went out to celebrate the Islamic Republic’s loss.’

The players have not strictly supported their government. Team captain, Ehsan Hajsafi, previously addressed the protest in a press conference before the Group B opener, garnering public support.

‘We have to accept that the conditions in our country are not right and our people are not happy,’ he said.

Since then, Iran has gone 1-2 in Group play, beating Wales but losing to England and the US. 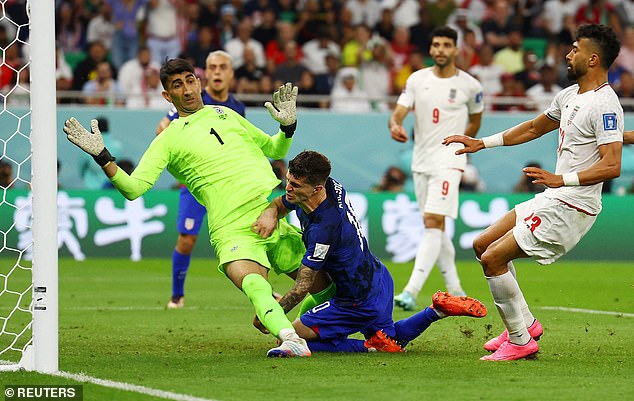 Christian Pulisic of the U.S. collides with Iran’s Alireza Beiranvand after scoring a goal 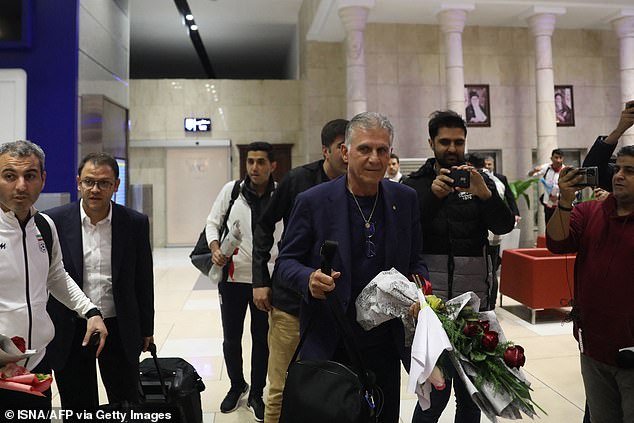 Fans take photos of Iran’s Portuguese coach Carlos Queiroz (C) as he arrives at Imam Khomeini Airport in Tehran on December 1, 2022 after the Iranian national team competed in the Qatar 2022 World Cup

Iran’s treatment of the players will likely be scrutinized because they refrained from singing the Islamic Republic’s national anthem during their opening World Cup match. Many considered the move a show of solidarity with the protests. The team did sing the anthem in subsequent matches.

Gabriel Noronha, the US state department’s former Iran adviser, told The Times of London that the national team has always been seen as a ‘national treasure,’ but has become the source of controversy after ostensibly being used by Tehran to foster national unity.

‘Supreme Leader Khamenei and regime elites have long viewed cultural and sports celebrities as threats to the regime’s totalitarian control, particularly singers and movie stars from the Pahlavi era [the royal dynasty which fell in the 1979 revolution] which fuel nostalgia among Iranians for that time,’ he said.

‘The regime views sports figures as particularly dangerous because they don’t answer to the state but still have popular support and can whip up opposition with relative impunity.’ 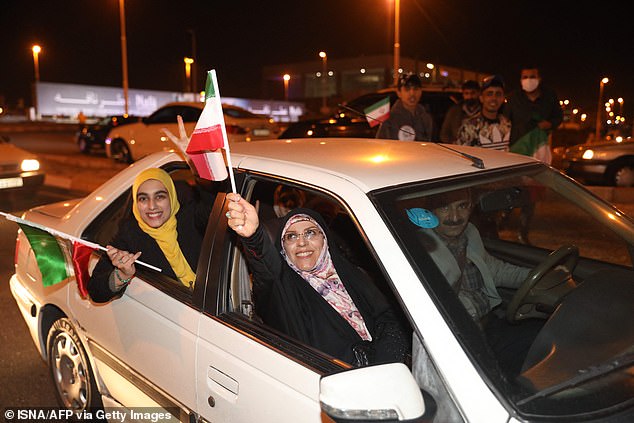 Yet the players have faced biting criticism from anti-government protesters who have blamed the team for not being more vocal about the security force’s violent put down of the demonstrations. Human rights groups say over 400 protesters have been killed in the crackdown, with thousands more arrested.

An image of players bowing in the presence of President Ebrahim Raisi before setting off to the tournament was widely criticized by activists on social media. A hardline cleric, Raisi has likened protesters to ‘flies’ and dismissed the movement as a foreign plot, without offering any proof.

Samak is also a childhood friend of Iranian midfielder Saeed Ezatollahi, who mourned his death on his social media. But again he received criticism from activists for not explicitly stating Samak was killed by government forces. 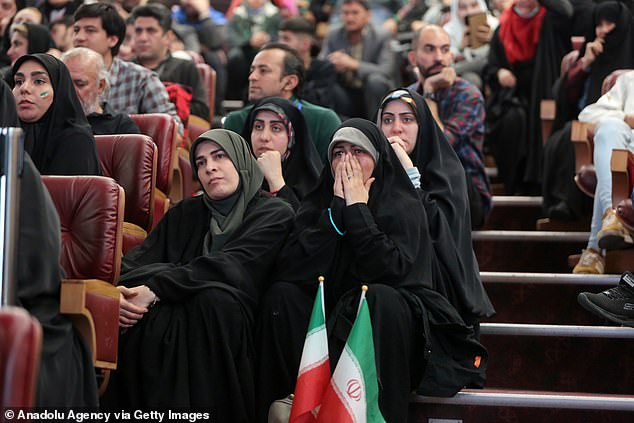 Many Iranian celebrities have however been targeted by the government with arrest or other measures for speaking out on behalf of the protesters.

Iranian officials acknowledged but downplayed compatriots celebrating the US win. Gen. Hossein Salami, chief of the paramilitary Revolutionary Guard, said those who had celebrated were doing so on ‘behalf of the enemies,’ adding ‘it is not important to us.’ His comments appeared in the semi-official Tasnim news agency.

A former culture minister and editor-in-chief of the Ettelaat newspaper, Abbas Salehi, who has close ties with Iranian Supreme Leader Ayatollah Ali Khamenei, tweeted: ‘Iran’s defeat in the game against America was bitter, but even more bitter was the happiness of some people.’

Iran was eliminated from the tournament in Qatar following the loss to the US on Tuesday that saw the players scrambling to score a goal in the last remaining minutes of the game. Striker Sardar Azmoun told reporters he was not satisfied with his performance in the last match.

It was the sixth time Iran has participated in the World Cup.

Anti-government protests first erupted in September, following the death of 22-year old Mahsa Amini in the custody of Iran’s morality police in the capital, Tehran. The protests quickly grew into the most serious challenge to Iran’s theocracy since its establishment in the 1979 Islamic Revolution. 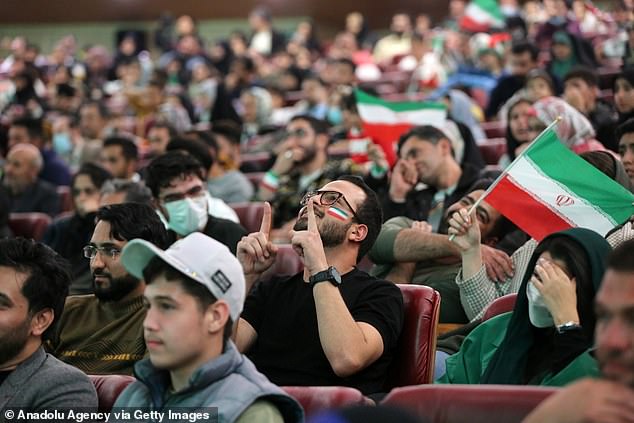