From Judy Garland and Doris Day to Bob Hope and Shirley Temple, no one quite rang in Christmas like the stars of Old Hollywood.

Whether they celebrated at home with their families or partied with fellow celebrities, they made sure to lend the Yuletide season a dash of showbiz glamour.

Occasionally the festivities even acquired a spicy touch, as in one classic 1942 photo shoot of the pioneering filmmaker Ida Lupino spanking Santa Claus’s behind.

Here DailyMail.com looks back at the Hollywood Christmases of yesteryear….

In 1942, Ida Lupino, then a Warner Brothers star and soon to become a pioneering filmmaker, starred in a classic photo shoot spanking Santa Claus’ behind 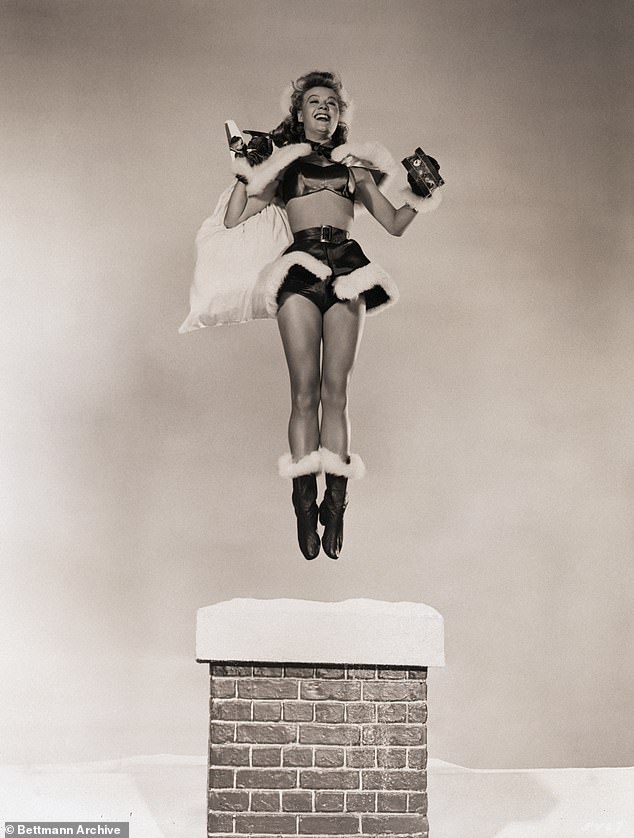 In 1949 Vera Ellen, who had just starred in On The Town with Frank Sinatra and Gene Kelly, foreshadowed the sexy costumes of today by posing above a chimney in Santa themed lingerie 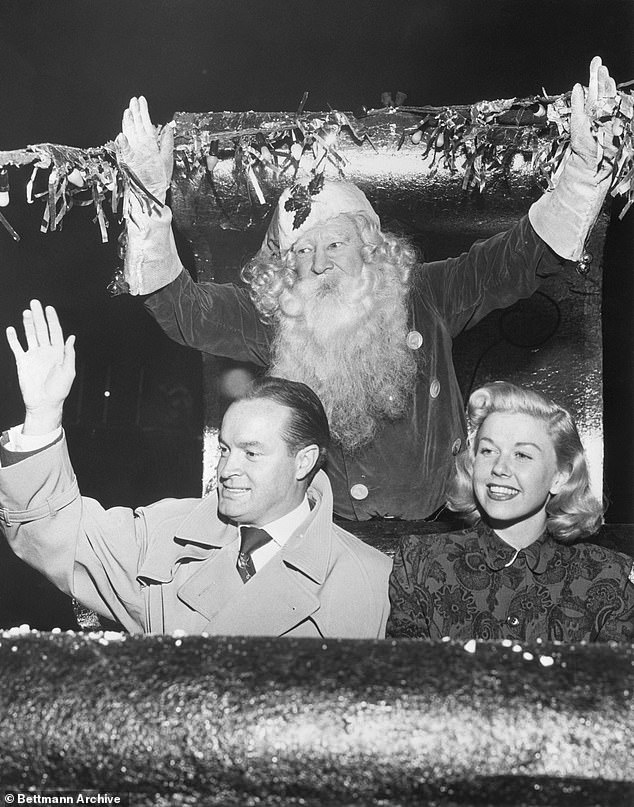 In 1948 Bob Hope and Doris Day brought a bit of Christmas cheer from Hollywood to American servicemen abroad; they are pictured about to leave for Berlin to perform for airlift GIs 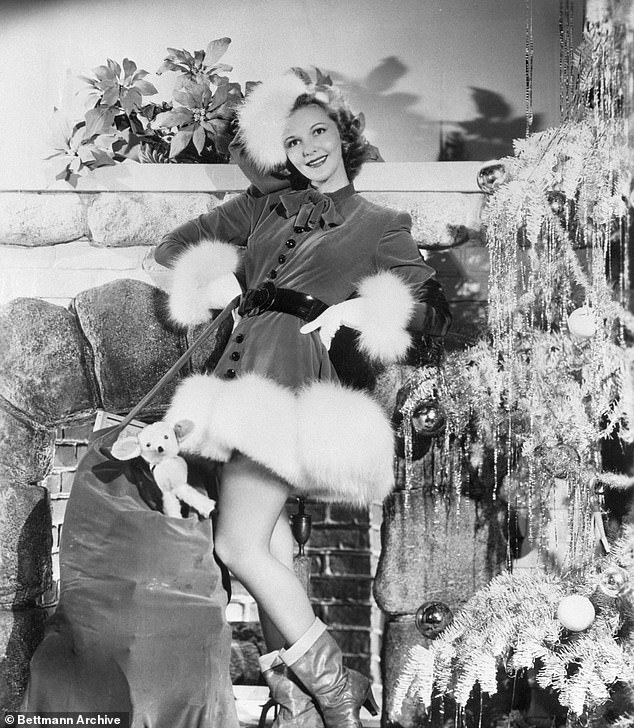 In 1940, when she did this Christmas pinup shoot in Los Angeles, Mary Martin had already begun the Broadway career that was to make her a star on the other side of the country 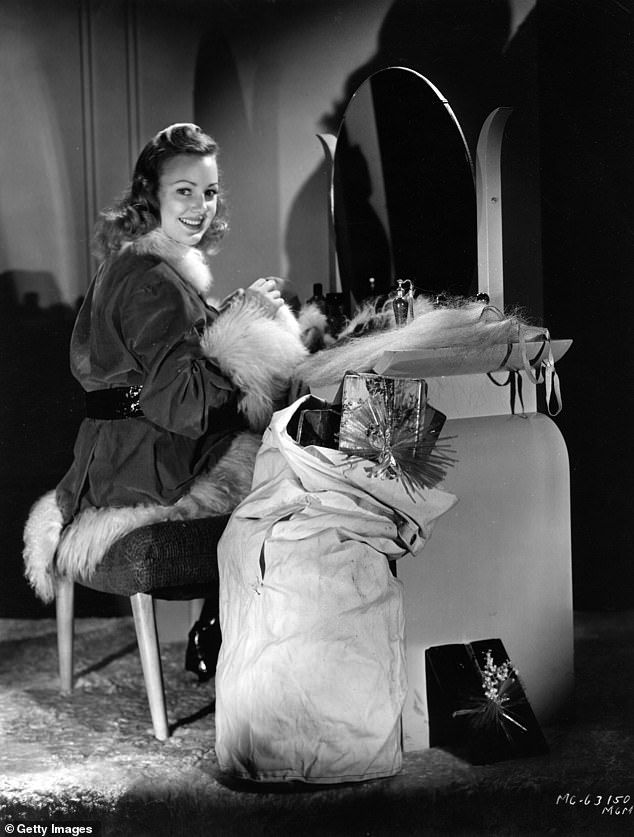 Around Christmas 1935, when she posed for this snap, Virginia Gray was still slogging away in chorus girl-type roles at MGM before achieving the greater name recognition she’d get later 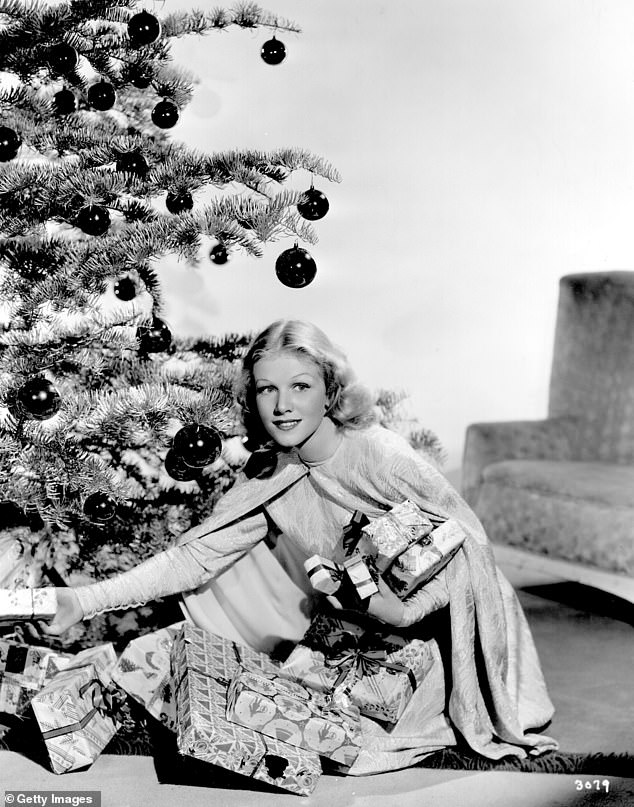 Julie Haydon retired from movies in 1937, when this snap was taken, and then headed east to embark on a glittering Broadway career that included the original run of The Glass Menagerie 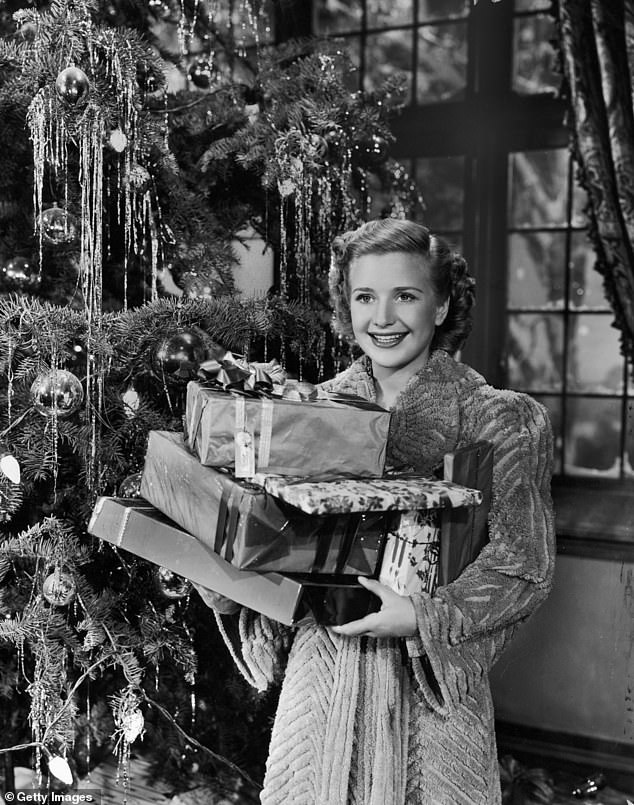 Priscilla Lane of the Lane Sisters stood for this publicity shot in Christmas 1941, the year she starred in the rom-com Million Dollar Baby opposite a young Ronald Reagan 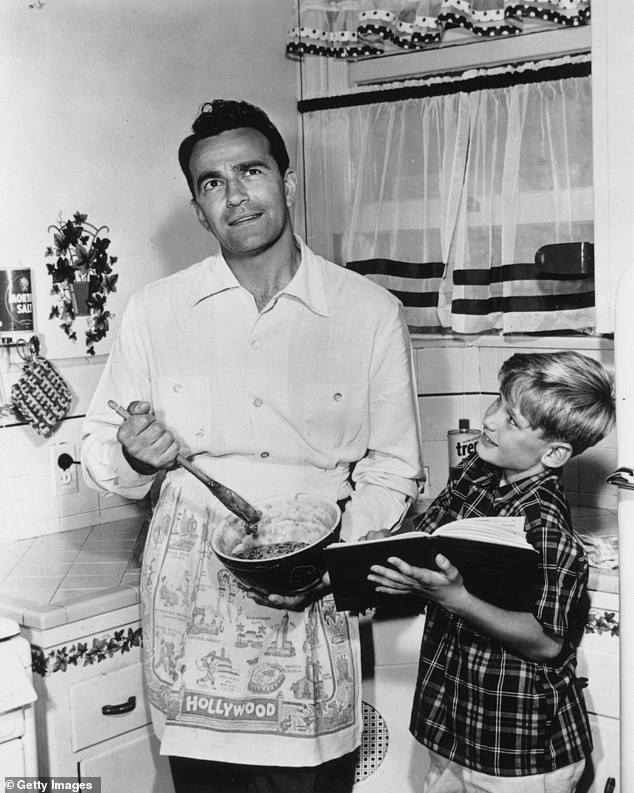 Despite being a B-movie actor in England, John Bentley enjoyed crossover success as a matinee idol in Hollywood, where he is pictured celebrating Christmas with his son in 1954 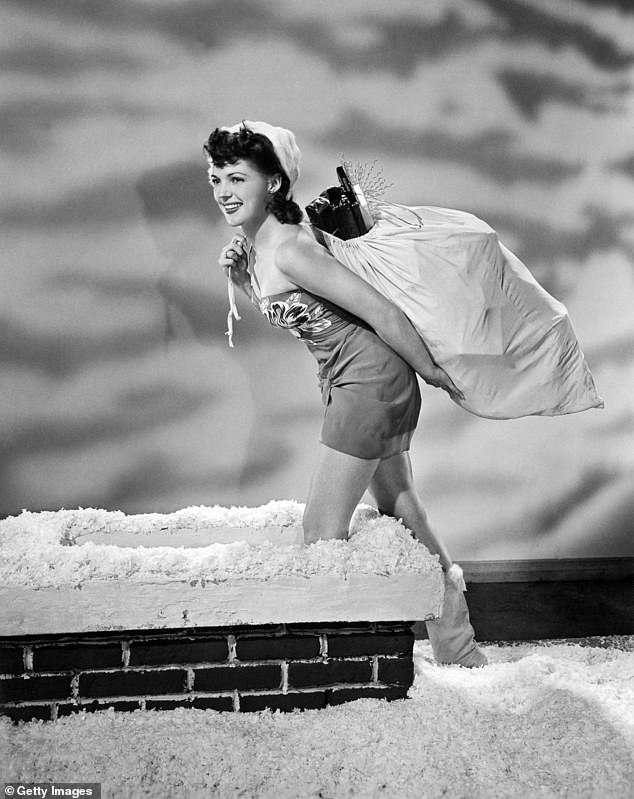 Chris Pine’s grandmother Anne Gwynne was herself a Hollywood actress and did a total of eight feature films in 1942, the year she joined the Sexy Santa pinup tradition with this photo 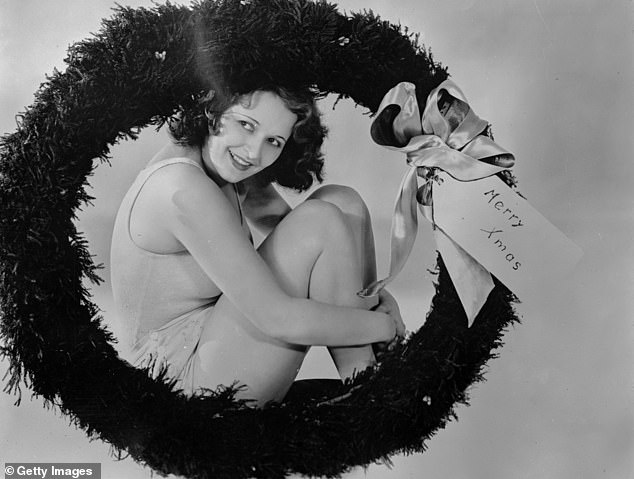 Dorothy Granger, the ‘Queen Of The Short Subject Films’ known for playing opposite Laurel And Hardy, brought an air of slapstick to this Christmas shot in 1930 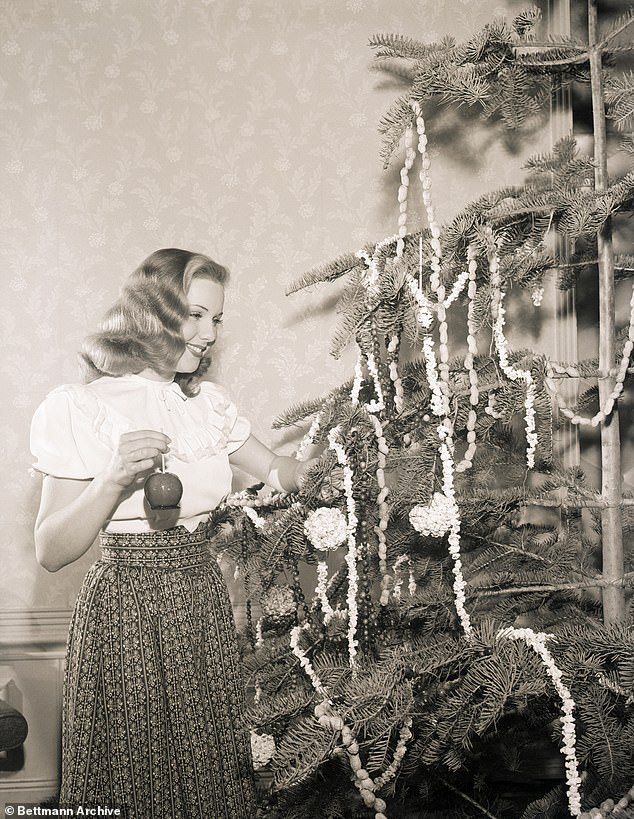 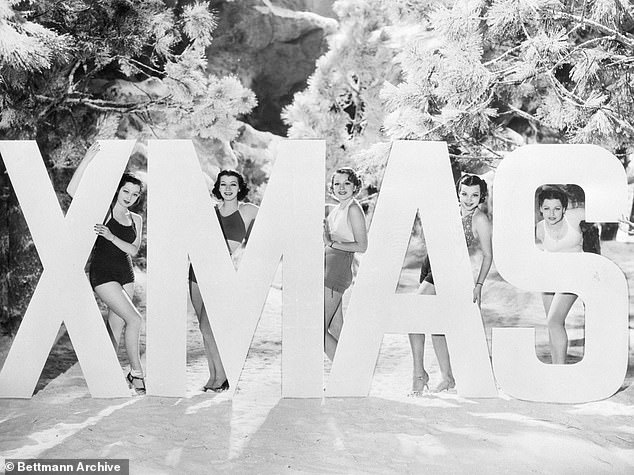 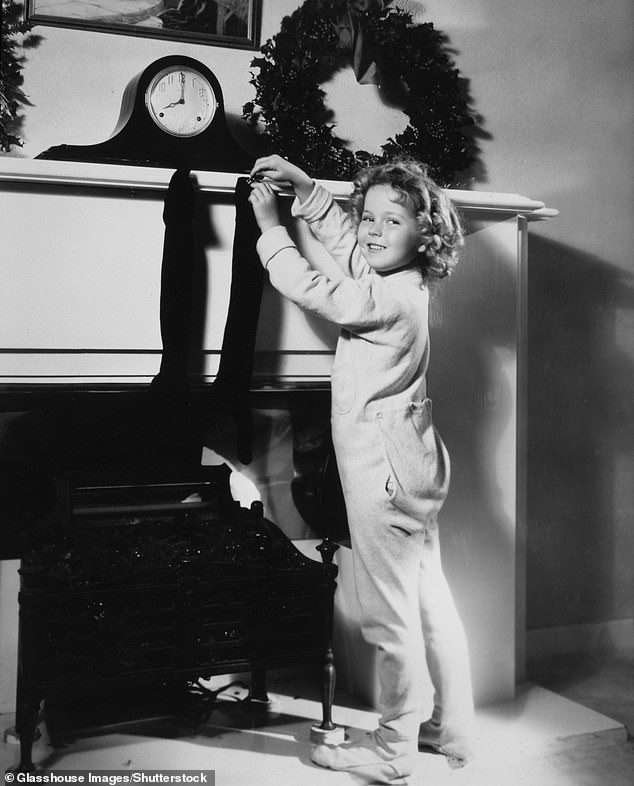 Shirley Temple was just six years old when she was featured in this Yuletide-themed publicity still in 1934, the year she became an international superstar in Bright Eyes 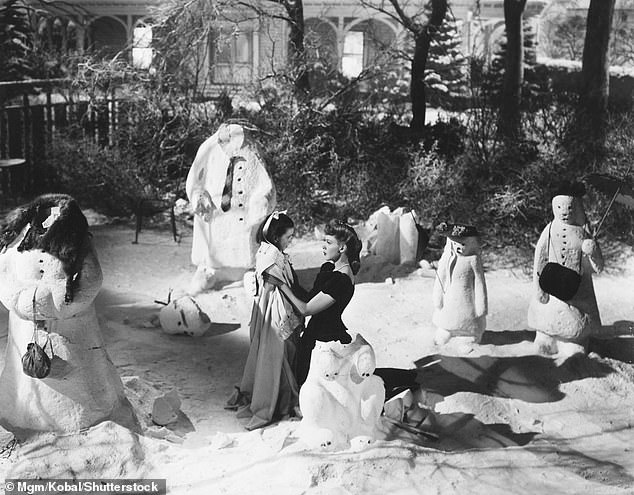 Judy Garland is pictured with child actress Margaret O’Brien filming Meet Me In St. Louis, the film in which she introduced her seasonal standard, Have Yourself A Merry Little Christmas 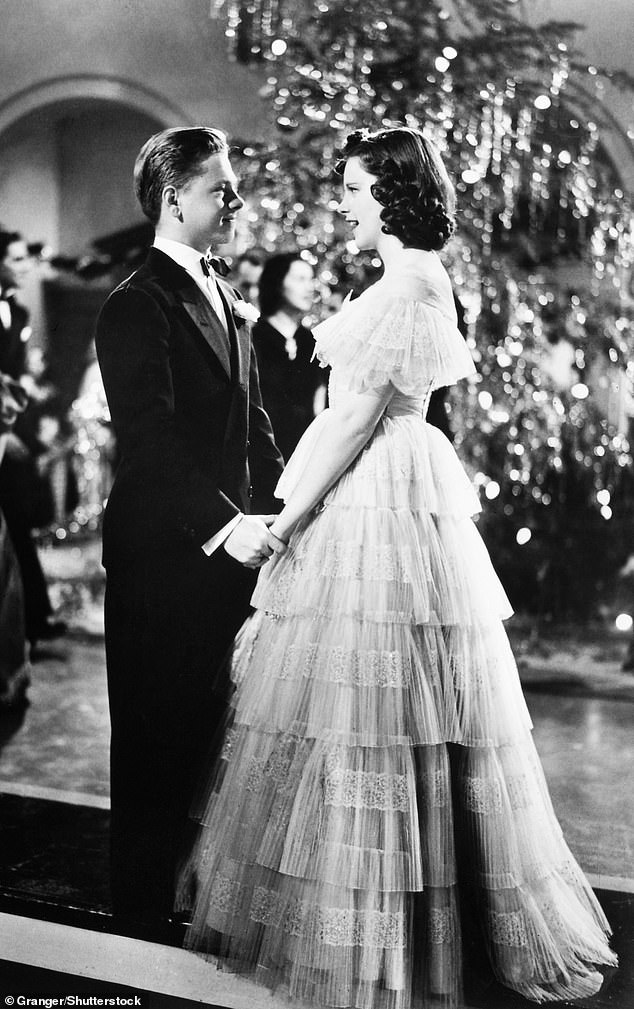 Judy first became a beloved movie star opposite her teenage crush Mickey Rooney in a string of MGM musicals, such as the 1938 picture Love Finds Andy Hardy (pictured) 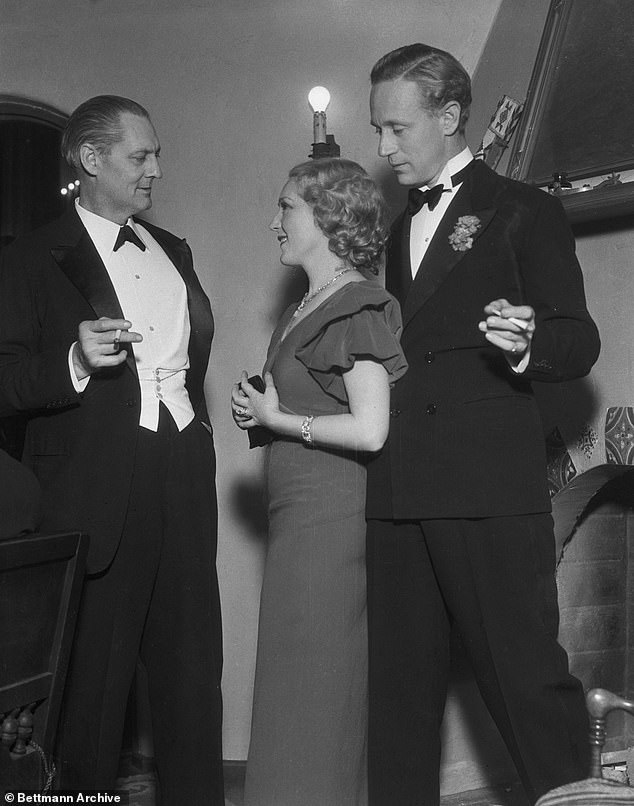 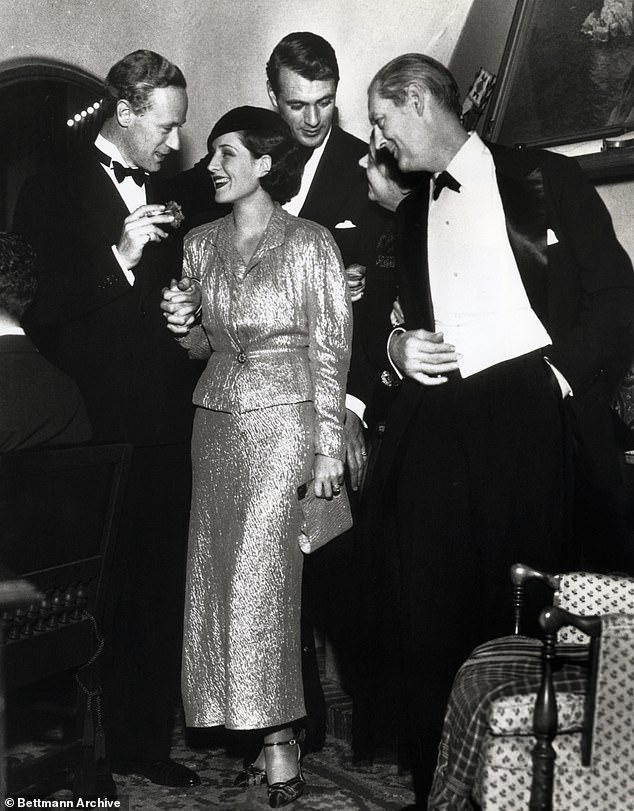 At the same party, Leslie (far left) and Lionel (far right) were seen chatting cheerfully to Norma Shearer and their dashing host 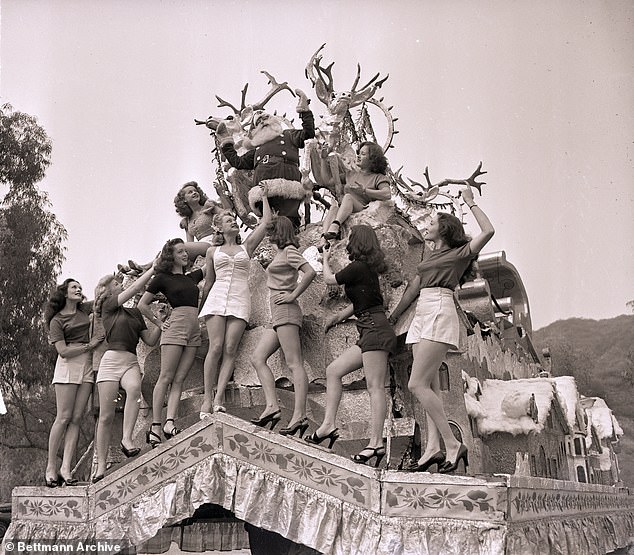 On November 29, 1946, Hollywood Boulevard was transformed into Santa Claus Lane for the Christmas parade pictured here, including such displays as this $25,000 float 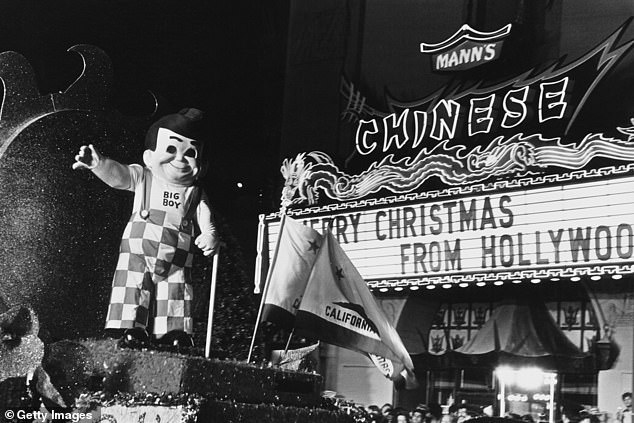 The Santa Claus Lane Parade, which has been going on under various names since 1928 and is pictured in 1977, takes place the Sunday after Thanksgiving 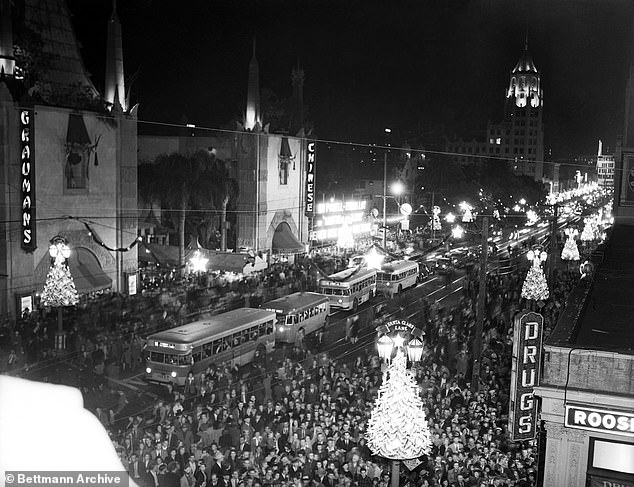 The Santa Claus Lane Parade is pictured in November 1939, just over two years before America entered World War II, prompting the annual extravaganza to be stopped until victory in 1945 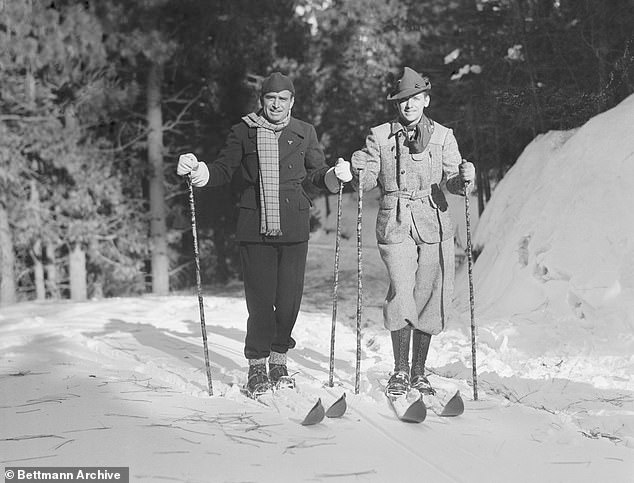 Douglas Fairbanks and his son Douglas Fairbanks Jr., the original movie star dynasty, enjoyed this skiing outing by Lake Arrowhead in California in 1932, seven years before the elder’s death 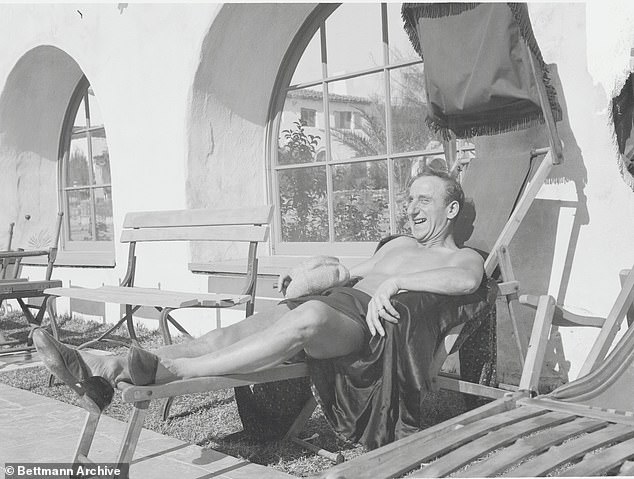 Jimmy Durante, the vaudevillian who famously mocked his own sizeable nose as a ‘schnozzola,’ enjoyed a sunny Christmas by the pool at the El Mirador Hotel in Palm Springs in 1932 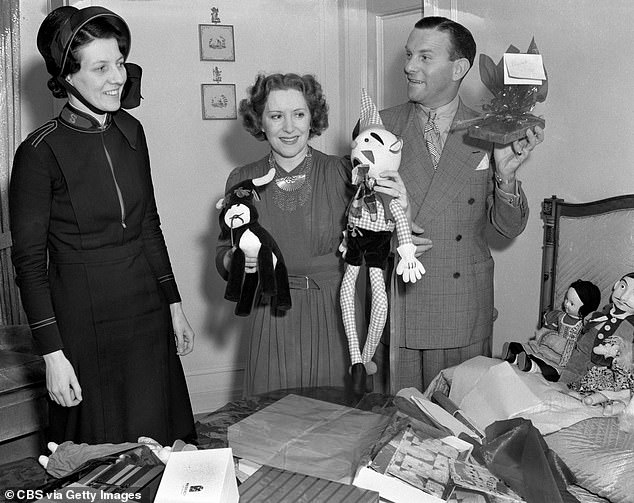 The iconic comedy duo of George Burns and Gracie Allen, who were then radio stars, are pictured in December 1939 with gifts for the Salvation Army 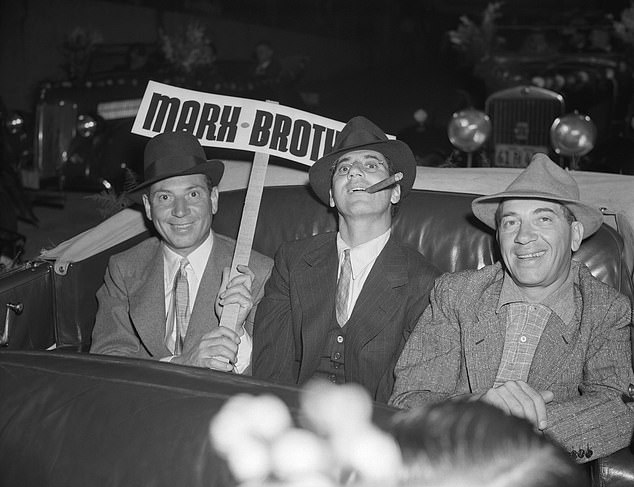 The Santa Claus Lane Parade welcomed a dazzling array of stars over the years, including in 1938 when the Marx brothers Harpo, Groucho and Chico all participated 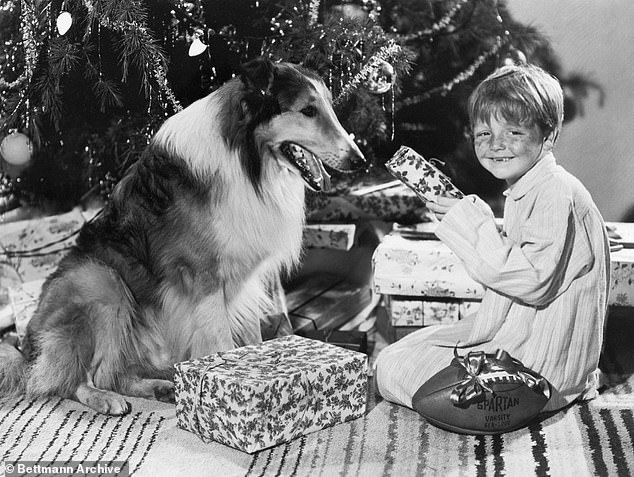 Lassie the movie dog was rustled up for this 1947 Christmas morning publicity shot with Butch Jenkins, a then 10-year-old child actor who did not himself feature in the Lassie pictures 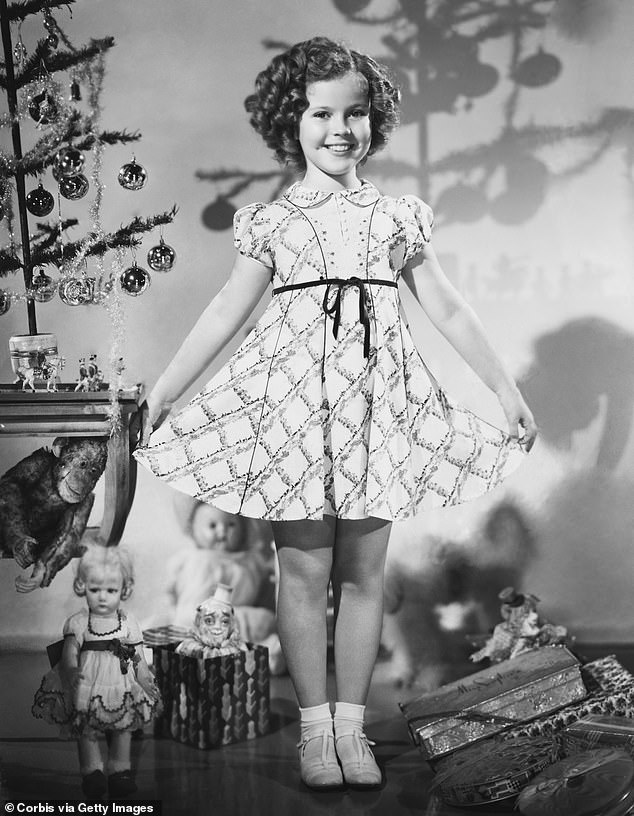 Of course the reigning child actress of the period was none other than Shirley Temple, who posed for this Christmas snap in her star-making year of 1934 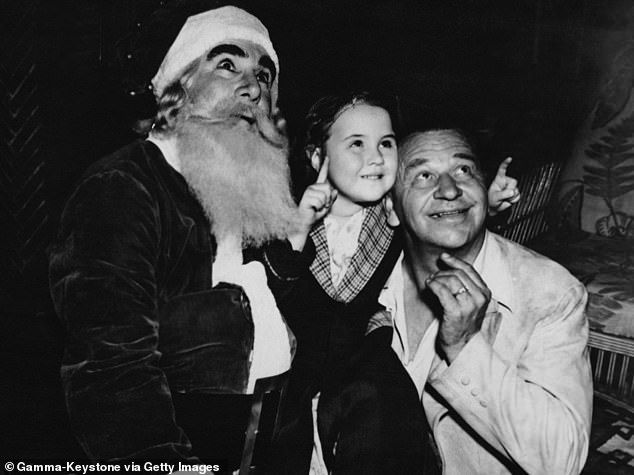 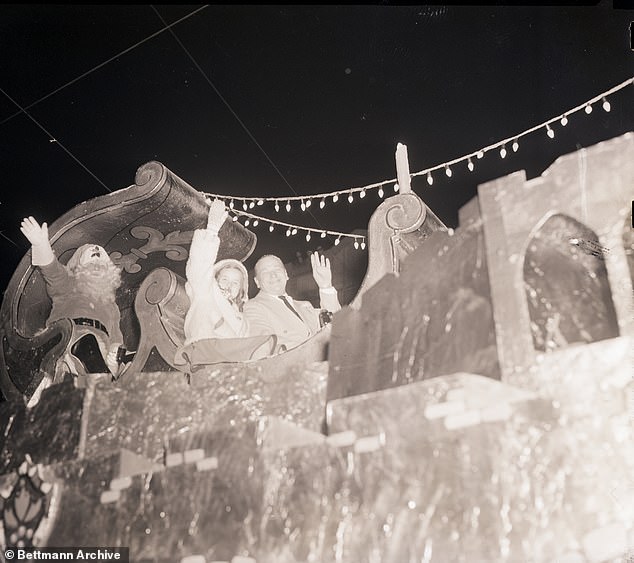 Four years after the Sydney Jarvis snapshot, Wallace and Carol Anne Beery are pictured atop a float in the Santa Claus Lane Parade 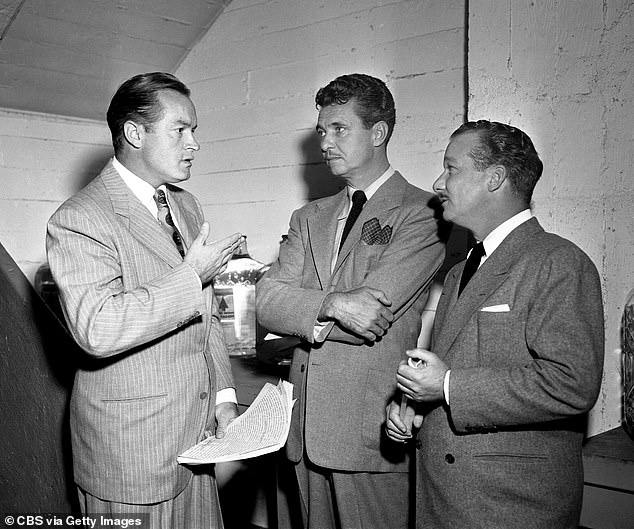 Bob Hope is pictured with Chester Lauck and Norris Goff, who played the radio comedy duo Lum and Abner, as they all prepared for a CBS Christmas special in 1947