Jennifer Lawrence was left in a fit of giggles as she was photographed bumping into a stranger who was sporting the exact same dress as her while out for a walk on the streets of New York City – however the actress is not the only star who has fallen victim to the matching outfit faux pas.

Although J Law, 31, was coincidently captured on camera, over the past few years many stars have faced an even more embarrassing situation after showing up to the red carpet wearing the exact same outfit as another celebrity guest.

One of the biggest fashion fears for any A-lister is confidently arriving at the red carpet only to find themselves sporting an identical ensemble to one of the other attendees.

But despite the majority of stars boasting a styling team who help to ensure they look their very best at any and all events they might attend, the accidental outfit match has happened to a number of different celebrities, from Shakira to Olivia Munn to Julianne Hough.

However instead of sulking off and hiding or dismissing themselves of the stylists, celebrities have shown the world that they too can embrace their embarrassment in solidarity.

Here, FEMAIL recaps the most iconic accidental outfit matches from the past few years…

Jennifer Lawrence, 31, was left in a fit of giggles as she photographed wearing the same dress as a stranger on the streets of NYC

Seeing Double! J Law sports the same dress as a stranger on the streets of NYC

The actress, 31, stepped out of her home to meet a friend while wearing a neutral dress from La Garconne, however she was shocked when she saw a woman wearing the exact same $625 dress.

Jennifer spotted the woman from afar and it appeared as though she said something to her as the two then burst out laughing at the coincidence.

Both the star and the woman seemed to be amused at their accidental twinning and both parted ways giggling, surely thinking abut the unforgettable moment.

Jennifer paired the dress from La Garconne with black sandals, a two-tone handbag and small framed sunglasses, while the woman paired her look with Bottega Veneta tote and clogs.

The actress is known for her impeccable style having serves as a Dior ambassador for the past 10 years, the star was stunned at the accidental twinning.

Despite it being a fashion faux pas, the Hunger Games star laughed it off and went back to enjoying her stroll with her friend. 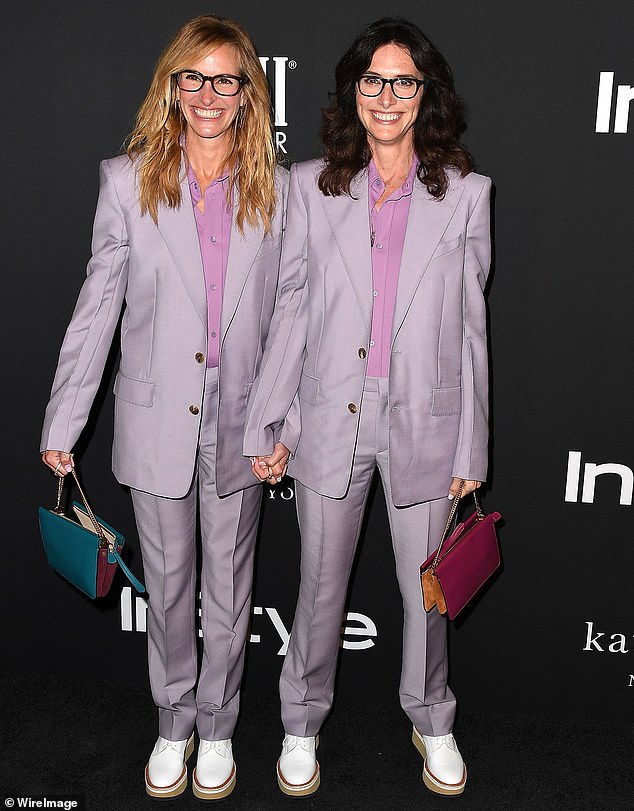 Julia, 54, and her stylist were pictured arriving at the awards in head-to-toe matching outfits, leaving everyone seeing double

Who’s who? Julia Roberts and her lookalike stylist Elizabeth Stewart wear identical suits on the red carpet of the InStyle Awards

Many guests thought their eyes were playing tricks on them when actress Julia Roberts and stylist Elizabeth Stewart showed up wearing the exact same suits at the 2018 InStyle Awards.

Julia, 54, and her stylist were pictured arriving at the awards in head-to-toe matching outfits, leaving everyone seeing double.

Although it’s usually a fashion faux pas to step out wearing the same outfit, the actress disagreed and said it was the ‘perfect night’ to shock everyone by twinning.

The pair have an extremely close relationship and  after they stepped out in matching outfits, Julia was quick to defend their actions.

In an interview with People, Julia said: ‘Elizabeth is one of my closest friends and for us, it was just fun’

The star added that the two found the ‘humor’ in it and laughed about it. 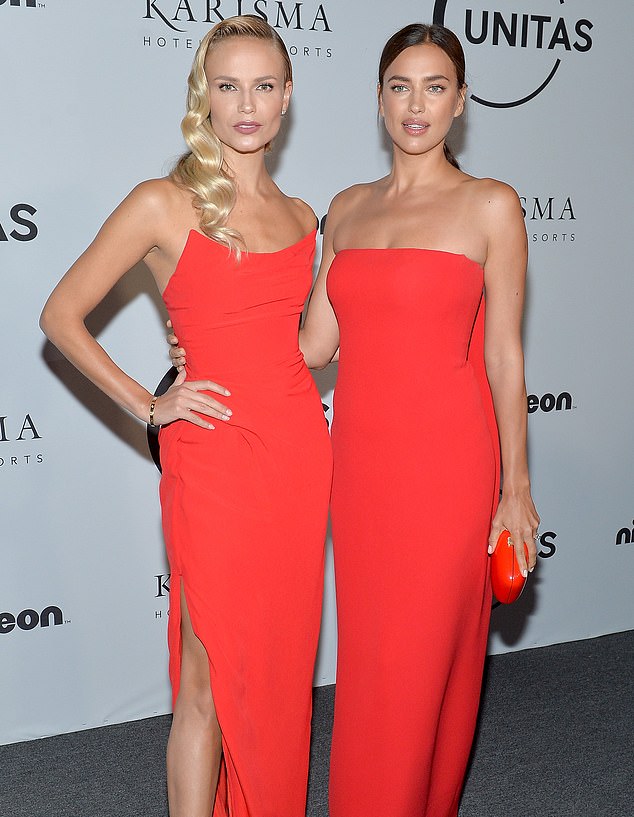 Red hot: Natasha Poly and Irina Shayk bring the heat as they stun in practically the same exact dress at the Unitas Gala

Models Natasha and Irina were baffled when they saw each other wearing similar strapless red gowns at the 2017 Unitas Gala.

Despite wearing the nearly identical gowns, the two close friends found the fashion crime amusing and even posed next to each other, making sure everyone at the event knew the two were matching.

Natasha, 37, sported a red strapless gown with a curved neckline and corners that pointed up and a high slit. The supermodel paired her look with black pumps and let her hair hang loose.

Irina, 36, wore a similar red strapless gown that flowed all the way down, with a straight neckline. She paired her look with classic red pumps and added a red clutch to complete her outfit.

The friends stood arm-in-arm as they posed for photos at the event, seemingly unphased by their accidental matching.

Irina even took to Facebook to share a flick of the two wearing the same gown with the caption: ‘Always a good time with @natashapoly.’ 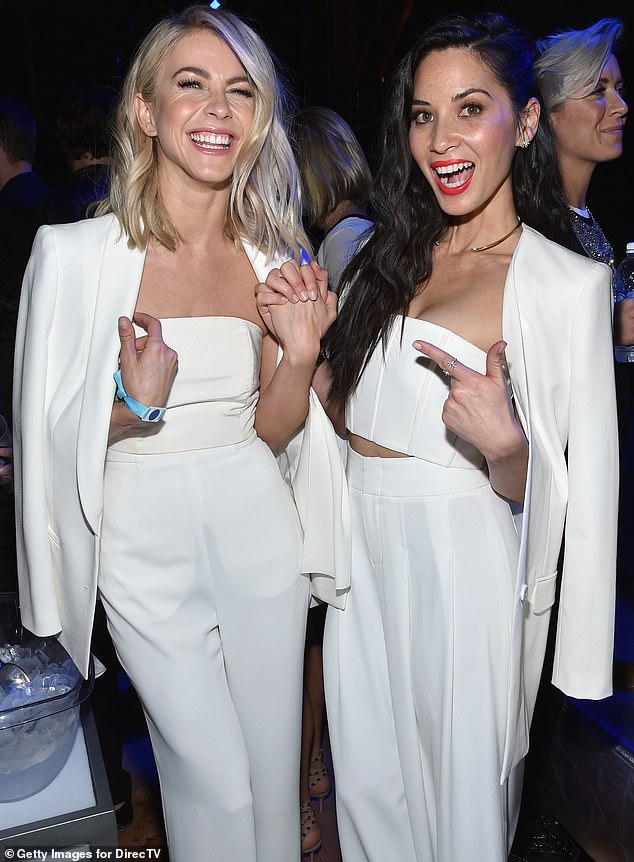 Julianne, 34, and Olivia, 42, sported white trouser suits for the pre-Super bowl party and the two managed to laugh it off

Julianne, 34, and Olivia, 42, sported white trouser suits for the pre-Super bowl party and while many would’ve hid at the sight of someone else wearing the same outfit, the two managed to laugh it off.

Julianne’s look varied slightly from the X-Men actresses, as she wore wide-legged trousers and a white strapless top underneath her white cape-like blazer.

Meanwhile, Olivia sported a Alice + Olivia suit with a white crop top to match her pants. She showed guests a peak of her abs by leaving space between the two garments.

The two both completed their look by letting their hair flow down in loose waves.

Julianne and Olivia proved to have a playful personality as they posed next to each other.

Julianne even took to Instagram to share a photo of them matching with the caption: ‘Accidental twinsies!’ 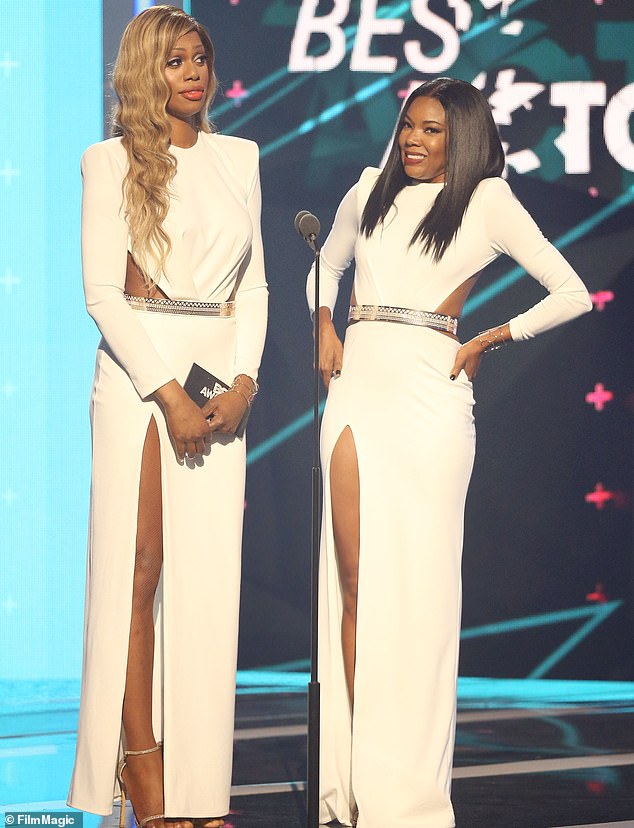 And the award for who wore it best goes to…. Laverne Cox and Gabrielle Union wear the same dress while presenting an award at the BET winner

Actresses Laverne Cox and Gabrielle Union stunned when they committed another fashion faux pas by wearing the exact same white gown while presenting an award together.

Laverne, 50, and Gabrielle, 49, approached the podium only to fin d out they were sporting the same cut-out, high-neck long white gown with a revealing slit.

Once they realized they were wearing the same dress, the stars awkwardly laughed it off and decided to play a round of hip hop trivia to find out who wore the dress best.

They played two rounds of hip hop trivia until Laverne was ultimately declared the winner.

And while Laverne won the trivia, it seemed as though both actresses found the incident funny and playfully laughed it off.

The glamorous stars luckily saw the humor in their matching outfits and continued presenting awards as if it never even happened. 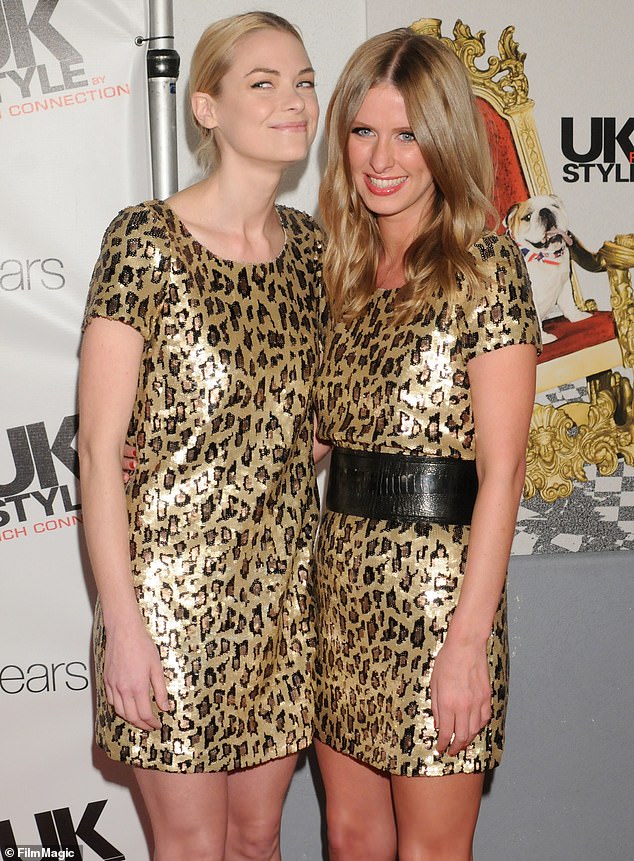 Animal print for the win! Jamie King and Nicky Hilton laugh off their ‘fashion crime’

The next two stars who committed the ultimate fashion crimes were models Jamie King and Nicky Hilton at the UK launch party for popular brand French Connection in 2011.

Both Nicky, 38, and actress Jamie, 43, stunned in the exact same sequin cheetah dress from the clothing line.

Jamie paired the animal print dress with a chunky black belt, left her hair in loose waves and classic black pumps, while Nicky tied her hair back in a simple bun and opted her black pumps to complete her look as well.

It was later revealed Nicky had requested to wear a floral print dress to the event, but after a mix-up she opted for the cheetah print dress instead.

Despite strutting down the red carpet wearing the same dress, the two appeared to be good sports about it and even laughed it off while posing next to each other.

Nicky then took to Twitter and shared:  ‘My girl @Jaime_King + I committed the ultimate fashion crime. Showing up at the SAME event in the SAME dress.’ 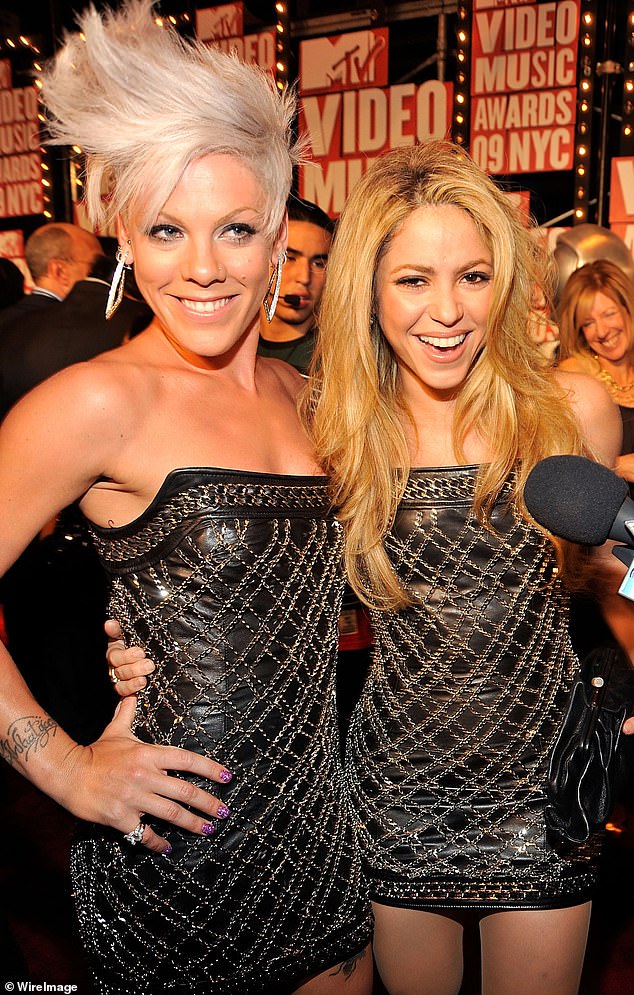 Singers Shakira, 45, and Pink, 42, were shocked when they both showed up to the 2009 MTV Video Music Awards

Singers Shakira, 45, and Pink, 42, were shocked when they both showed up to the 2009 MTV Video Music Awards.

Both the stars arrived wearing the exact same studded leather Balmain mini dress, The Hips Don’t Lie singer paired her outfit with thigh-high boots, while the So What singer sported classic pumps.

Although many would’ve been embarrassed by the fashion fiasco, the songstresses didn’t seem to mind.

The two even posed for a photo cheerly smiling about the coincidence.

In a 2209 interview with Usmagazine.com, Pink said she thought their matching outfits were ‘hilarious,’ and added her fashion twin was ‘hot.’

The two say they both took the crown that night for top fashion honor.