So where better to base a new series of the ultra-luxurious Real Housewives, with the show’s executive producer teasing that the series will debut in 2022.

Last week, executive producer Andy Cohen announced the news on the Today show revealing: ‘Everything’s bigger in Dubai, and I couldn’t be more excited to launch Bravo’s first international Housewives series in a city I’ve been fascinated by for years, with an outstanding group of friends as our guides.’

There are currently 15 international series of the hit show, including Real Housewives of Nairobi, Durban and Cheshire, made by oversease networks, but this will be the first one produced by the Bravo team behind the US programmes.

The focus will be on ‘a group of women navigating their relationships, careers and supremely lavish and ultra-wealthy lifestyles in the United Arab Emirates’, but it’s not yet announced who the cast will be.

However, there are definitely some frontrunners for a role on the hit show, including a supermodel with a internationally succesful Instagram account to an entrepreneur with the title ‘your excellency’.

Here Femail reveals the glamorous women who could soon be giving their US counterparts a run for their money.

Successful businesswoman Caroline Stanbury, pictured with her impressive walk-in closet, started as a stylist and is now worth £20 million 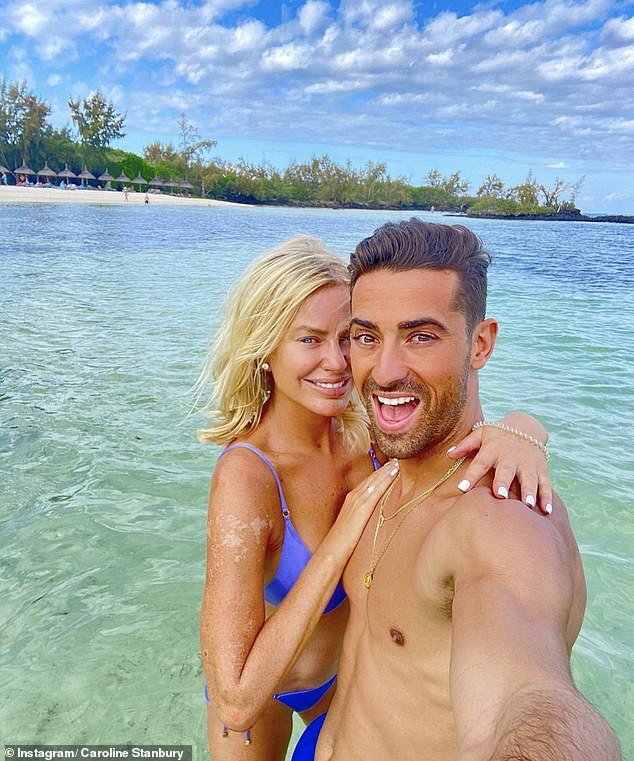 You might know her as the glossy haired ‘It’ girl with a bona fide aristocratic background, a woman regularly linked with the rich and eligible including, for a time, Prince Andrew and footballer Ryan Giggs.

Brit Caroline Stanbury, a previous reality star, is a favourite to take a top position on the show. And having starred on Bravo’s Ladies of London from 2014-2017, she certainly has the experience.

Growing up in Dorset, Caroline was born into the Vestey dynasty, which is believed to be the second wealthiest family in Britain after the King in 1940.

She once had a room in the lavish Surrey mansion she shared with then-husband Cem Habib dedicated to her £200,000 designer handbag collection – including 25 bags by Hermes and Chanel. 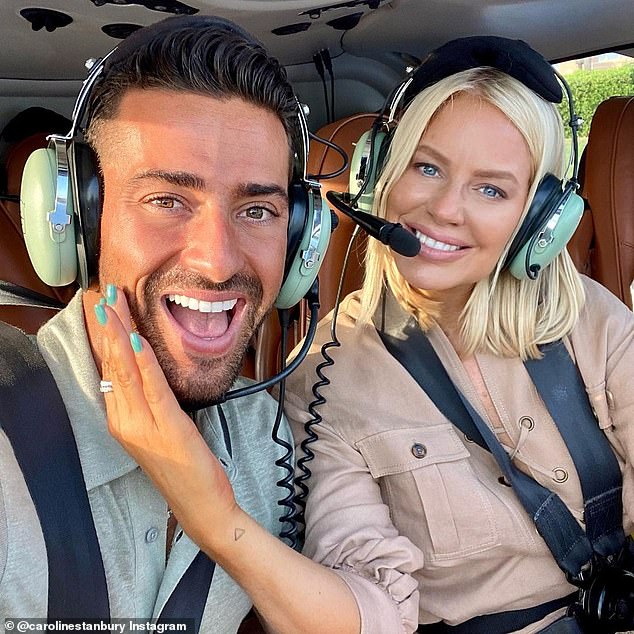 Posting a helicopter selfie on Instagram, Caroline penned: ‘Very special day for a very special man … @sergiocarrallo you light up everyone’s world who knows you ! your smile is contagious even in my grumpiest times you can make me laugh … I cannot wait to call myself your wife’

The successful businesswoman who started as a stylist and is now worth £20 million, has three children with Turkish financier Cem, but the pair divorced in 2019.

However, she recently became engaged to former Real Madrid soccer player Sergio Carrallo – but not before making sure both parties signed a pre nup.

‘We’re creating a brand. I love working with him but we do fight. I don’t know what our future looks like but I’m willing to take the chance on what we have right now. Fingers crossed we all get to the end, but you never know.’ The impending nuptials — for which no date has yet been set — have also brought up some other concerns.

‘He does want children,’ adds Caroline, who grew up in Dorset and now lives in Dubai. ‘I’ve been dealing with doctors here. One thing we did do is freeze my eggs so we had the option.

I wanted it to be a choice — if Sergio and I want a baby, it’s our choice. If I can’t have one, it wouldn’t be our choice, and I don’t want him to leave me because we couldn’t have one.’

Mother-of-three Nina, 42, who is super influencer of the incredibly successful Instagram account @LipstickMommy, lives in Dubai with her beloved husband, Munaf Ali, who she moved from her hometown, Texas to be with.

She runs a cake business, aptly named ‘Fruit Cake,’ which delivers ‘Fresh & Premium Quality Fruit Cakes’ with the quick touch of a button on Whatsapp to anyone who desires one in Dubai. 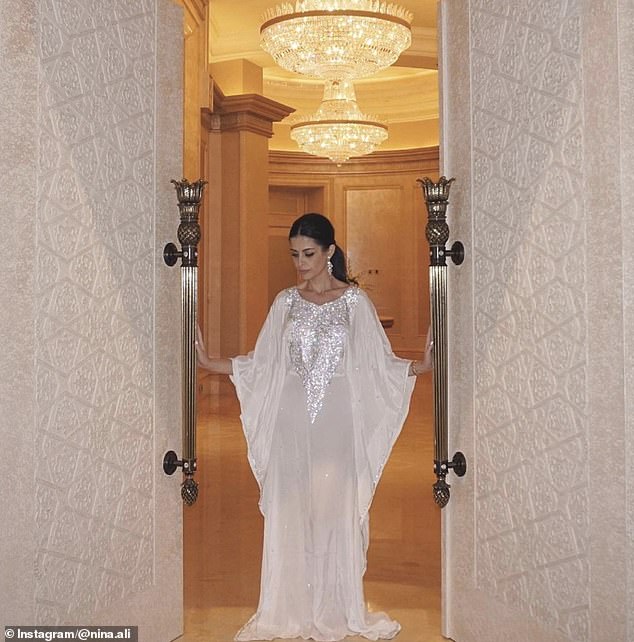 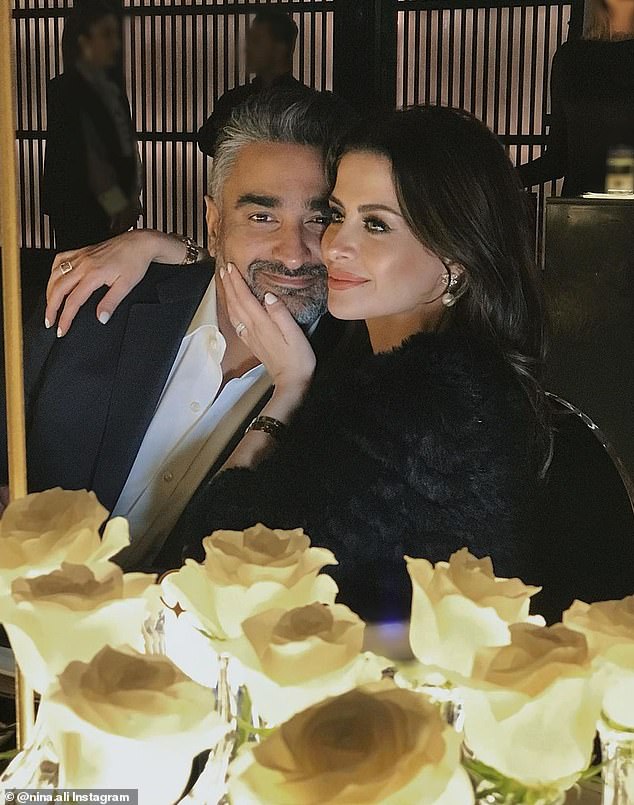 Nina, who fell in love with her husband Munaf Ali (pictured, together) after meeting through her cousin’s brother-in-law, was wooed after he flew half way around the world just to take her for dinner.

Nina, who fell in love with her husband after meeting through her cousin’s brother-in-law, was wooed after he flew half way around the world just to take her for dinner.

‘He would only be there to see me for a few days, and then when we were apart we would speak daily, on the phone and Skype,’ she told Harper’s Bazaar.

On Halloween, Nina was seen partying with other rumoured cast member Caroline Stanbury and her fiancé Sergio Carrallo, while she celebrated her birthday in September surrounded by designer gifts from the likes of Chanel and Dior. 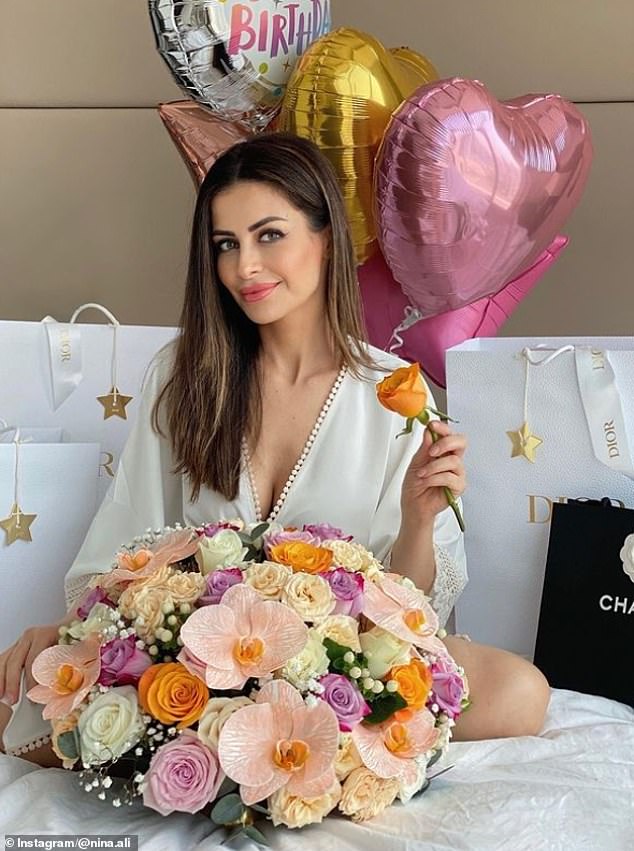 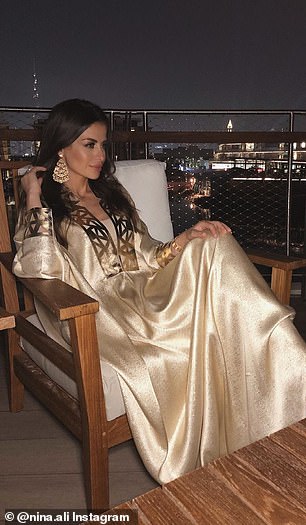 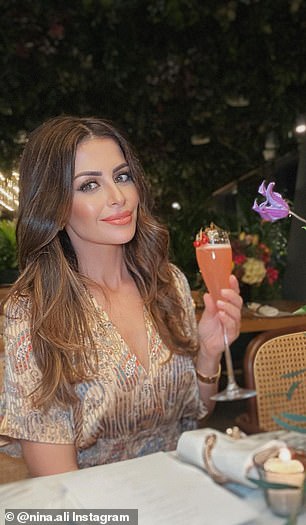 By the time she reached 26, she became known as ‘your excellence’ after being selected by Sheikh Sultan Al Qasimi, ruler of the UAE emirate of Sharjah, as a board member of the Sharjah Chamber of Commerce & Industry (SCCI) – the youngest board member to date.

Describing herself as a ‘spiritual gangster,’ the entrepreneur noted to ACCA Global that: ‘I believe when you want to be a leader, you need to inspire by setting examples.’

‘I started my business when I was 15 and it was a man’s world; nobody helped me.’ With many facilities and initiatives available nowadays for Emirati women, however, there is no excuse.’ 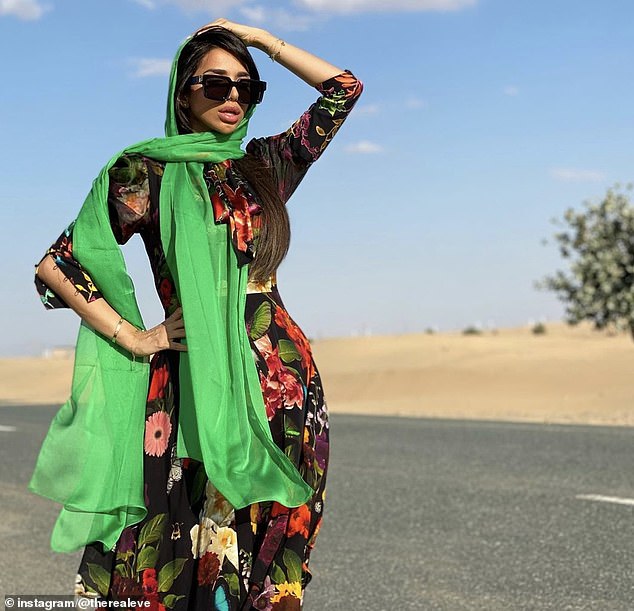 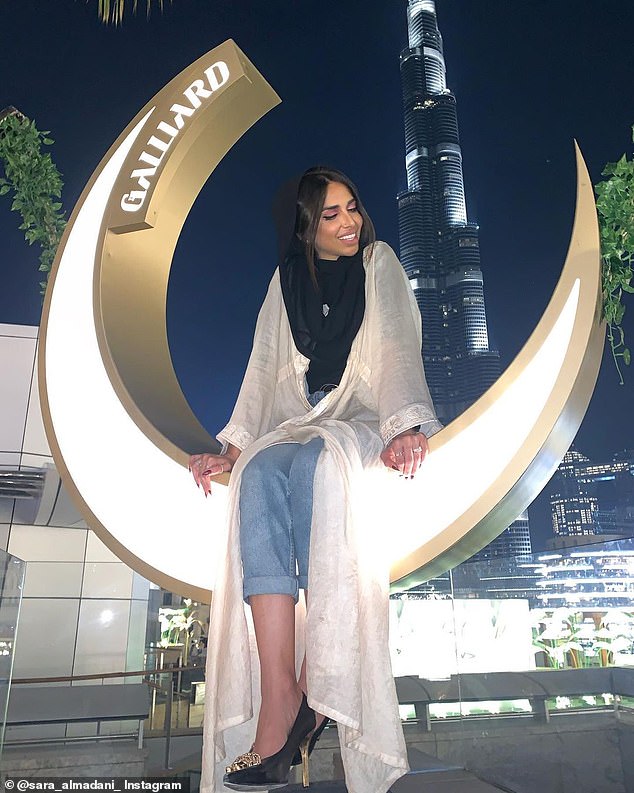 Sara has since gone on to run successful businesses including her own Sara Al Madani fashion design company, marking and social media consultancy Social Fish and events business, Proposal Cupid.

Her Instagram is also one to be celebrated, boasting over 428 thousand followers and often teaming up with cosmetic brands to boost her career.

And when she’s not working, she can be seen dressed in head-to-toe designer – with one quick scroll of her social media revealing that her favourite brands include Gucci, Fendi and Givenchy.

Meanwhile, she spends her spare time mingling with the rich and famous and has even been known to hang out with singing sensation, Usher.

In August 2015, she welcomed her son Maktoum, six, into the world.

Announcing the arrival on social media, she penned: ‘I thought I knew what love is but I realised that I don’t, because with you I experienced an unconditional love.’ 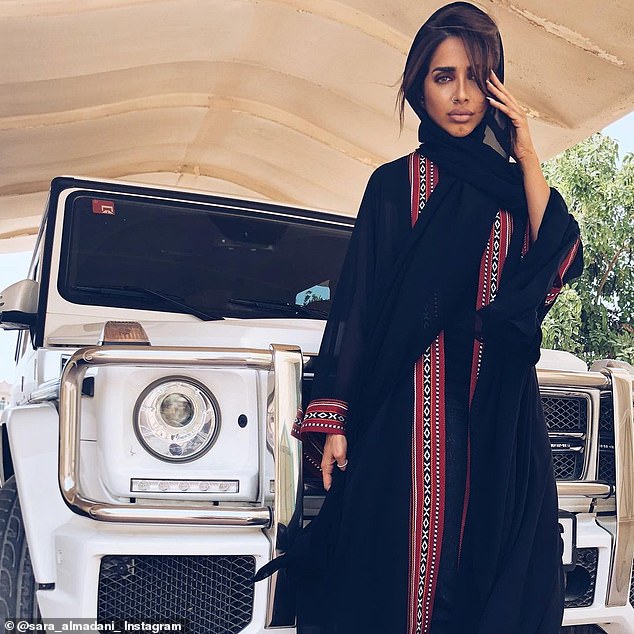 In August 2015, Sara (pictured, in Dubai) welcomed her son Maktoum, six, into the world

Ex Miss Jamaica Universe contestant Lesa, who resides in Dubai with her husband, British financier Richard Hall, and her three sons, Maximilian, Sebastian and Kristian, describes herself as ‘someone raising the stakes.’

During the height of her pageantry success, she also competed in Miss Hollywood Teen USA pageant, Queen Miss Jamaica Caribbean World in 2010 and entered the Miss Caribbean World 2010 pageant.

The 31-year-old is the founder of children’s educational brand My Little Makers and is currently working to expand her maternity wear line, Mina Roe. 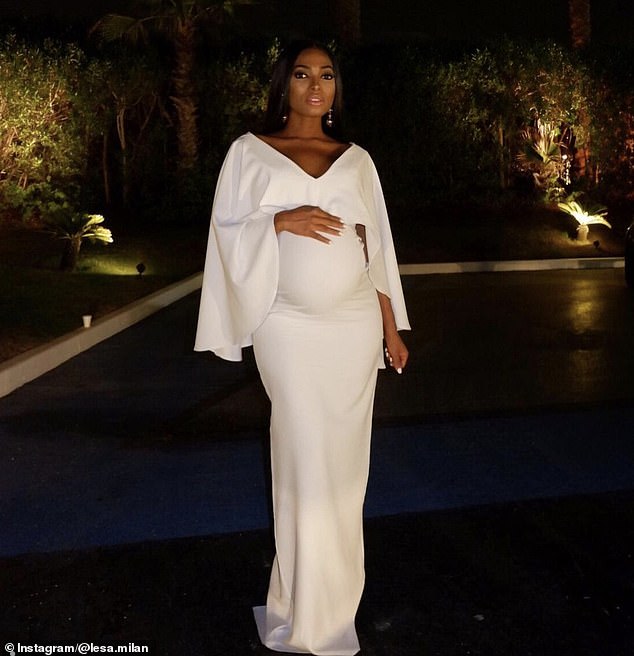 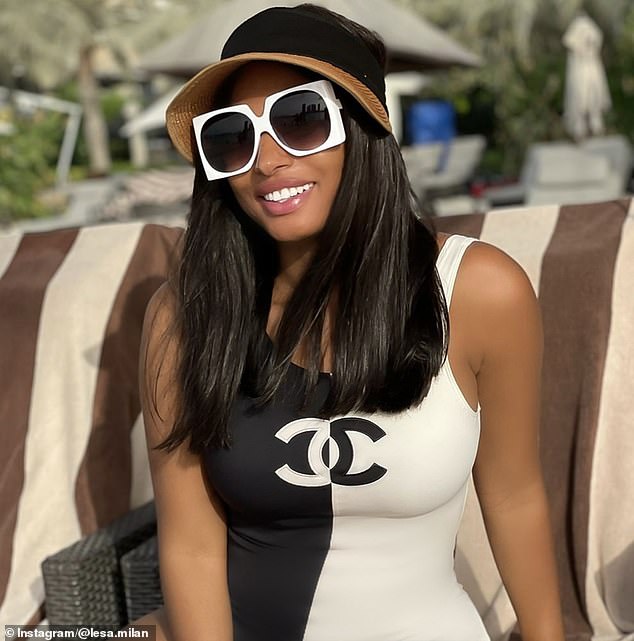 During the height of her pageantry success, she also competed in Miss Hollywood Teen USA pageant, Queen Miss Jamaica Caribbean World in 2010

Lesa, who is reportedly married to British financier Richard Hall and was linked to Olympian Usain Bolt in 2009, is also a fashion designer, who has worked with some of the biggest names in showbiz.

Speaking to Cosmopolitan ME, Lesa revealed that dressing Beyoncé was a high point, saying, ‘People often think I’m quiet, but I’m not. I’m an observer and I reserve the best parts of myself for the people who I think deserve it. I’m really a chatterbox.’

Lesa – who is pals with Chanel Ayan and Nina Ali – grew up in Miami and attended Florida Atlantic University, where she studied broadcast journalism. 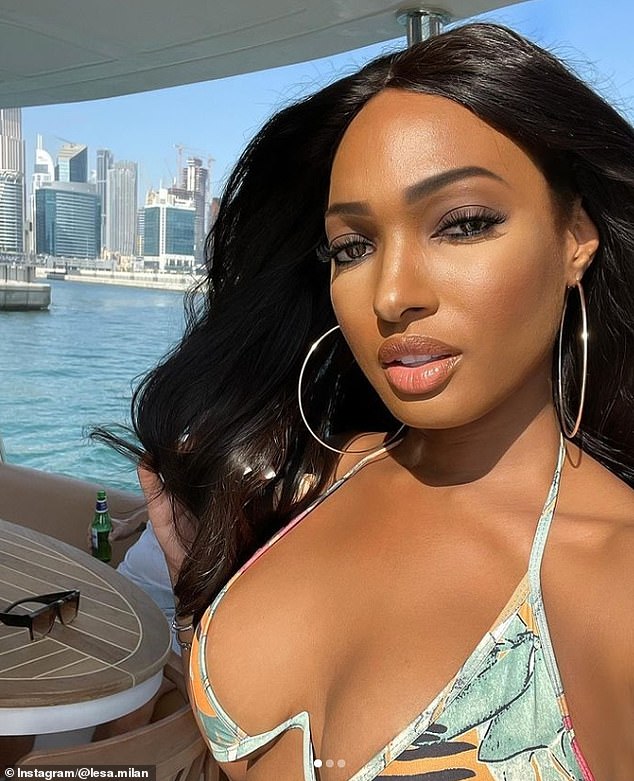 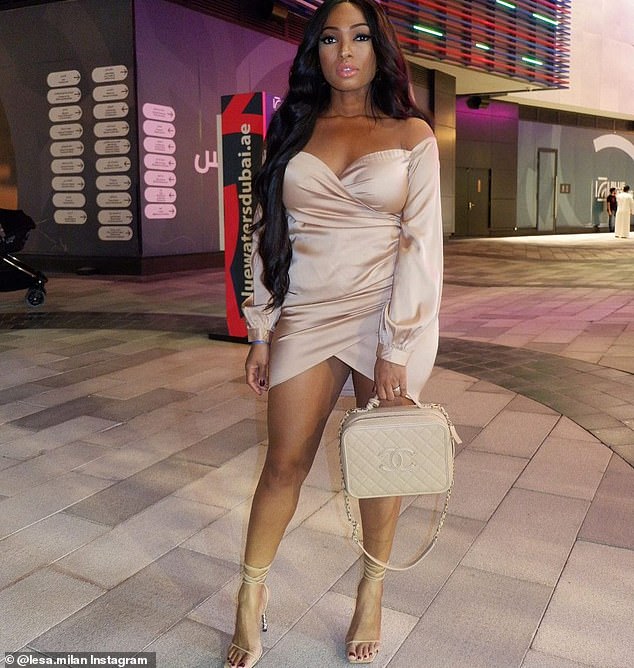 Boston-born Caroline, who has branded herself a ‘real estate powerhouse,’ is a Real Estate Director for the company Rent DXB.

With over 131,000 loyal followers on Instagram, the jet-setting socialite likes to keep her fans updated on her lavish lifestyle by documenting her travels with her beau, Nigerian Footballer Odion Jude Ighalo.

When she’s not flying around the world, the philanthropist and mother, who can regularly be found sharing designer clothes and dazzling locations, lives in Dubai. 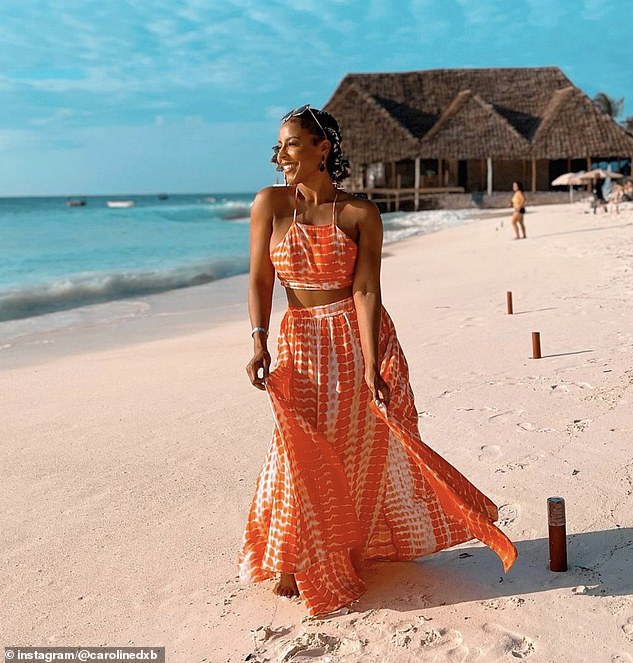 Boston-born Caroline, who has called herself a ‘real estate powerhouse’ is a Real Estate Director for the company Rent DXB 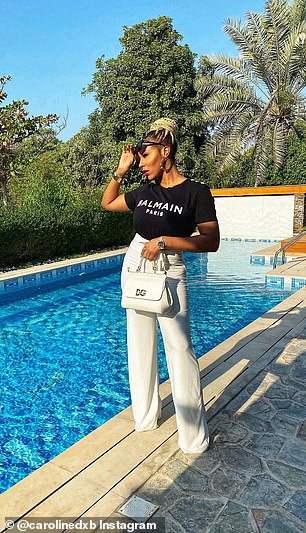 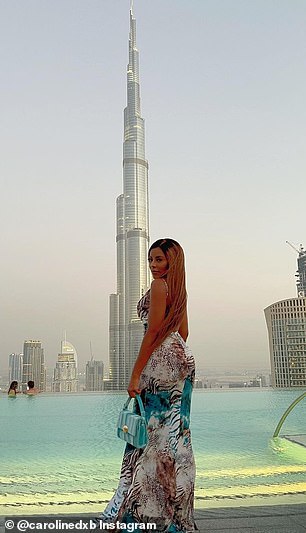 The jet-setting socialite likes to keep her fans updated on her lavish lifestyle by documenting her travels with her beau, Nigerian Footballer Odion Jude Ighalo

News outlets have previously linked her to Kenyan politician Hassan Ali Joho – and she once described him on Instagram as her ‘ex’.

Her social media bio also features Roman numerals XV.XI.MMXXI, which Real Housewives fans have guessed may be the date (November 15) that she will be announced as a cast member on the show.

Among the castmates rumoured to be appearing on the show is one of the leading models in the Middle East, Chanel Ayan.

Born Ayan Pillott in Kenya,  she was raised by her single mother and 11 siblings in a small village with less than 20,000 inhabitants.

She began modelling at a young age after a cousin from Sweden showed her a fashion magazine and relocated to Brazil as a 17-year-old, where she worked on commercials for brands like Bazaar and Coca-cola.

When she married, the model moved to New York, joined Elite models and eventually settled in Dubai in 2005.

The model (pictured, in Dubai), who has been the fact of Paiget in the Middle East and Chanel, has claimed to work with ‘every brand in Dubai’ 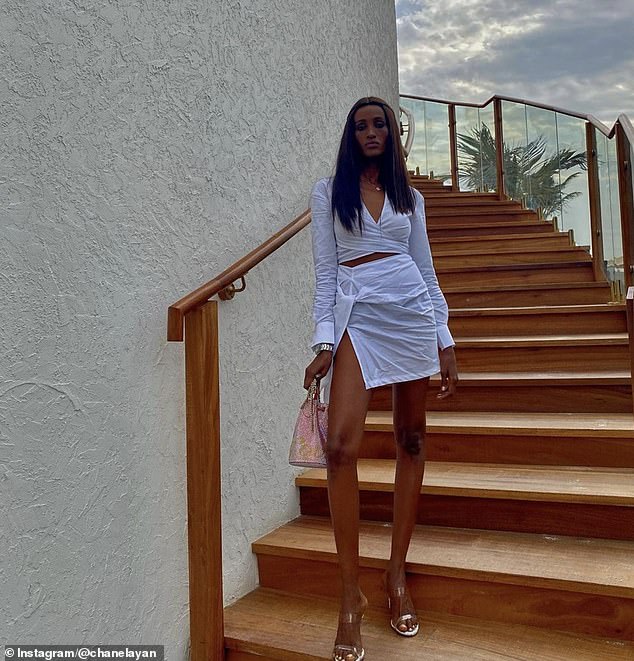 Among the castmates rumoured to be appearing on the show is one of the leading models in the Middle East, Chanel Ayan 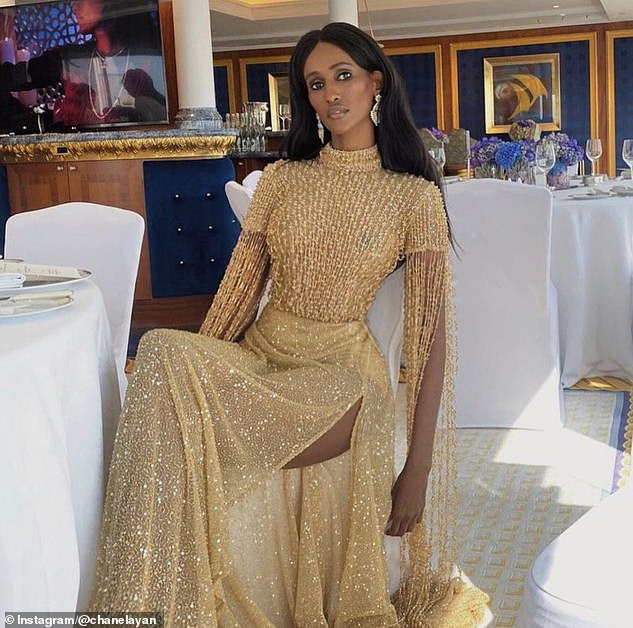 In an interview with Punch magazine, she said: ‘When I moved to Dubai 14 years ago there was no black modelling in Dubai.

‘I am the first black model to ever appear on magazine covers in Dubai.’

Speaking to L’Officiel Arabia magazine, she said: ‘The beginning was tough. There were no black models in the local fashion industry before me. I had to shatter the glass ceiling. I wasn’t chosen for fashion shows and it was frustrating.’

However she added: ‘Ultimately my unique look, my personality and stage presence did the job. When I get on the catwalk, it’s not that I’m wearing a dress, I am the dress.

‘I walked my first fashion show at a palace in Abu Dhabi. The audience was comprised of the royal family and other esteemed close associates. I remember I was on the verge of a breakdown’ 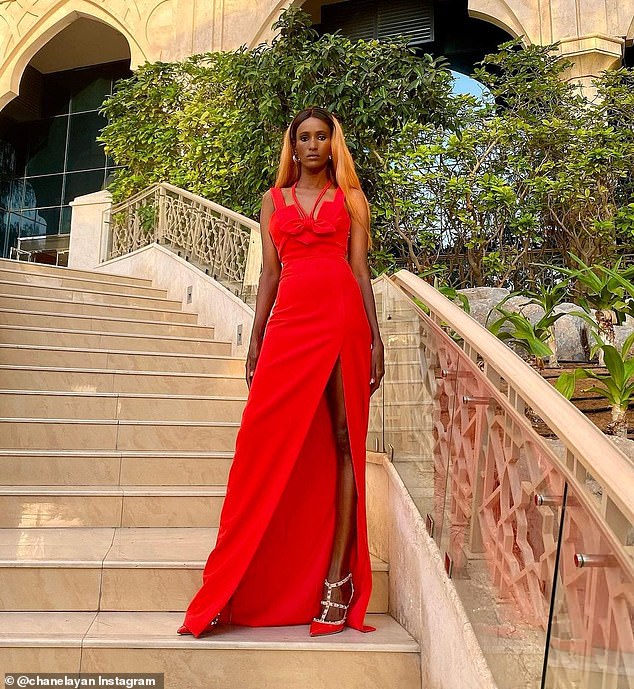 Chanel (pictured, in Dubai) has appeared in the pages of Vogue Dubai over 10 times

She has since appeared in the pages of Vogue Dubai over 10 times and even worked with superstar Rihanna for a shoot of her Fenty make-up line.

The model, who has been the fact of Paiget in the Middle East and Chanel, has claimed to work with ‘every brand in Dubai.’

She said: ‘I have done every brand in Dubai. I have done Prada, I’m the face of Paiget in Middle East, face of Channel.

‘I’m the only black girl that did Vogue. I have done big brands like Apple, Van Cleef and Piaget. It’s amazing to wear a million dollars earring and 10 million dollars chains.

‘I am the muse for one of the biggest designers in the world, the Amato couture. He has dressed Beyonce, Lady Gaga, Nicky Minaj, Shakira and JLo, he says am his muse.

‘I usually dress clothes for celebrities before he sends them to the USA for Oscars or anything.’