A non-stop 17-hour trek from Perth to London may seem a long haul for some, however it’s nothing compared to the four-day, 55-hour flight time once embarked by passengers in 1947.

On Saturday night the first direct Qantas carrier marked the beginning of the fastest way to travel between Australia and Europe as the only direct air link between the two continents.

Today, the average Australian weekly wage is $1,600 and a return fare from Perth to London can cost less than $1,300. 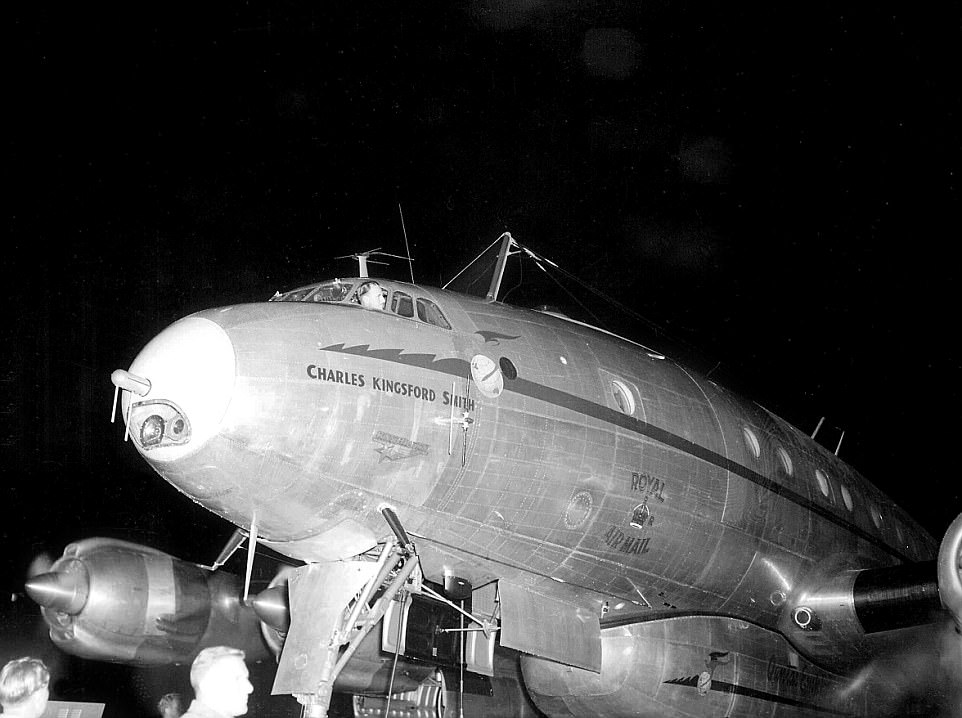 The inaugural, historic  Qantas flight to United Kingdom by Constellation aircraft at Mascot Airport Sydney ready for take off on 1 December 1947, the beginning of the ‘Kangaroo Route’ 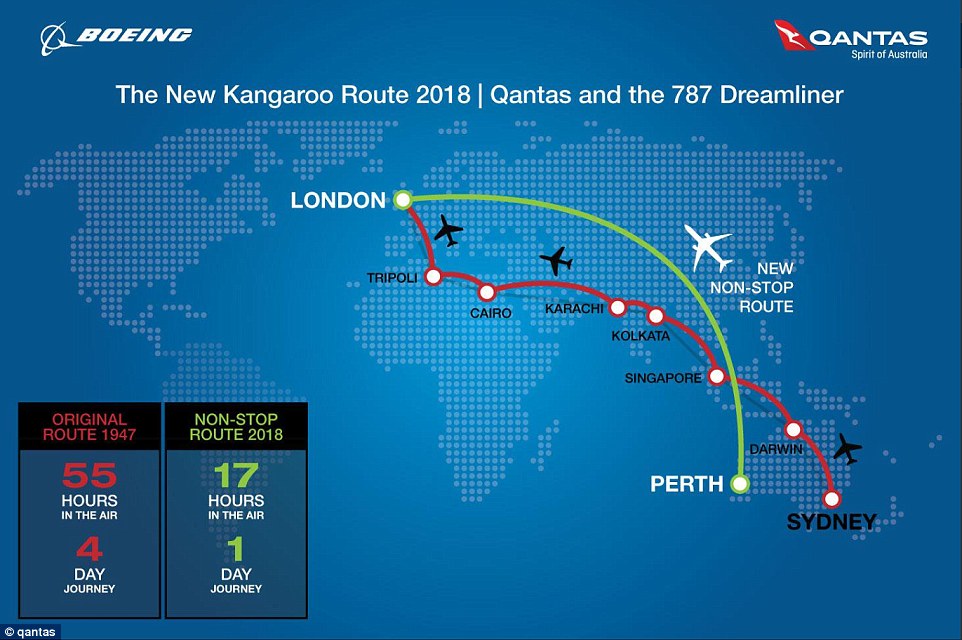 The journey kicked off a new era in travelling with the flight path eliminating stopovers.

But spare a thought for the jet setters who took the first Qantas flight from Brisbane to London in 1935.

The trip involved a long and complicated series of connections, transferring between a varying number of different-sized aircraft, all of which were cramped for space and would seem nightmarish to the modern traveller.

Back then, the new route was regarded as a fantastic new option for speedy travel and was greeted enthusiastically by travellers whose previous options for getting to London included a six week sea voyage. 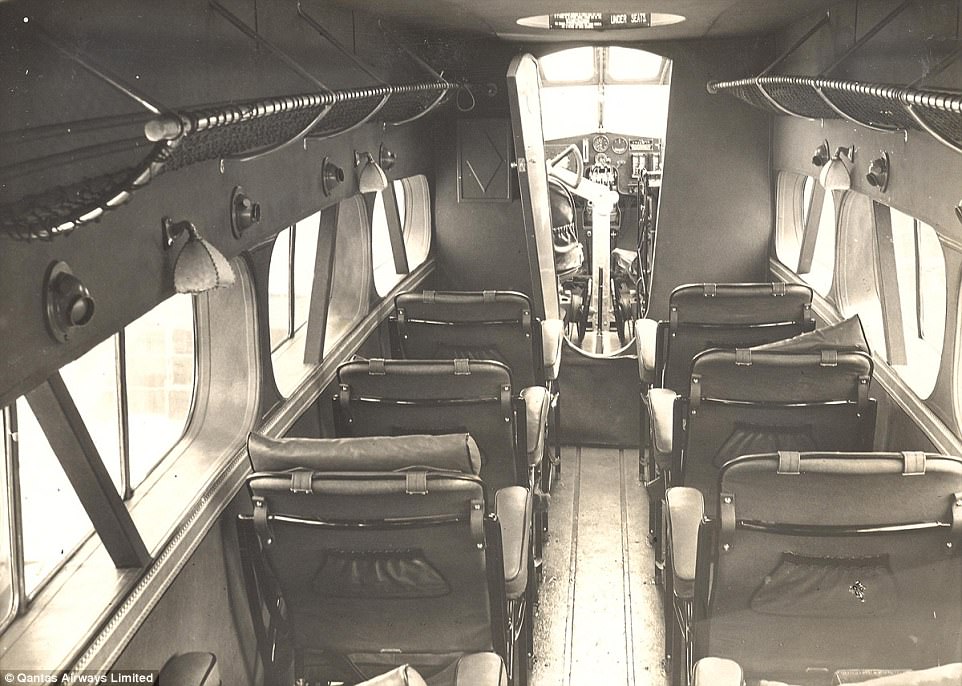 When Qantas began operating its first international service from Brisbane to Singapore, just ten passengers fit into the tiny De Havilland 86 plane (pictured). The flight took more than three days, made more than ten stops and had no cabin crew – although the co-pilot handed out sandwiches 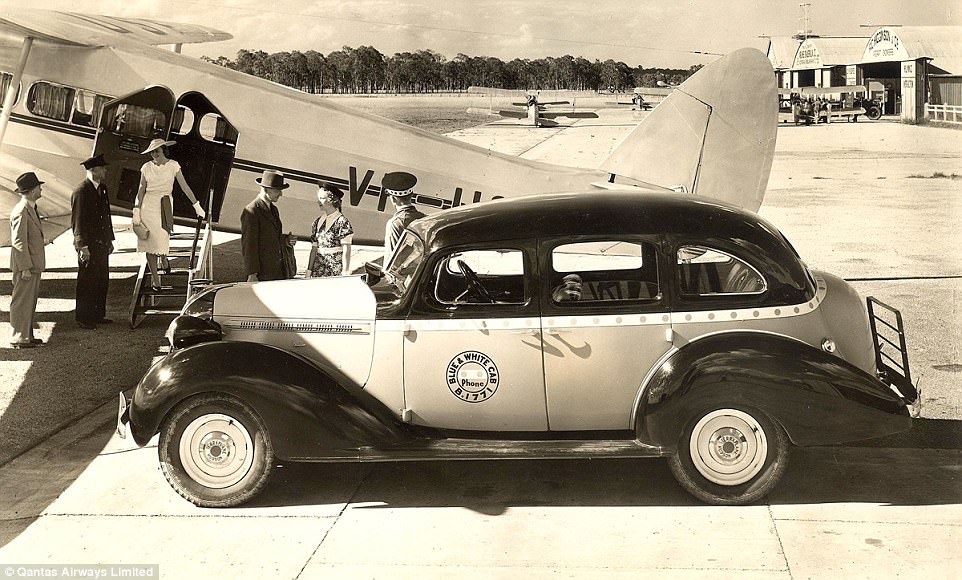 Passengers at Archerfield aerodrome in Brisbane 1935 on the steps of the tiny DH86 aircraft, which took more than three days to get to Singapore via more than ten stops in the Australian outback and Indonesia 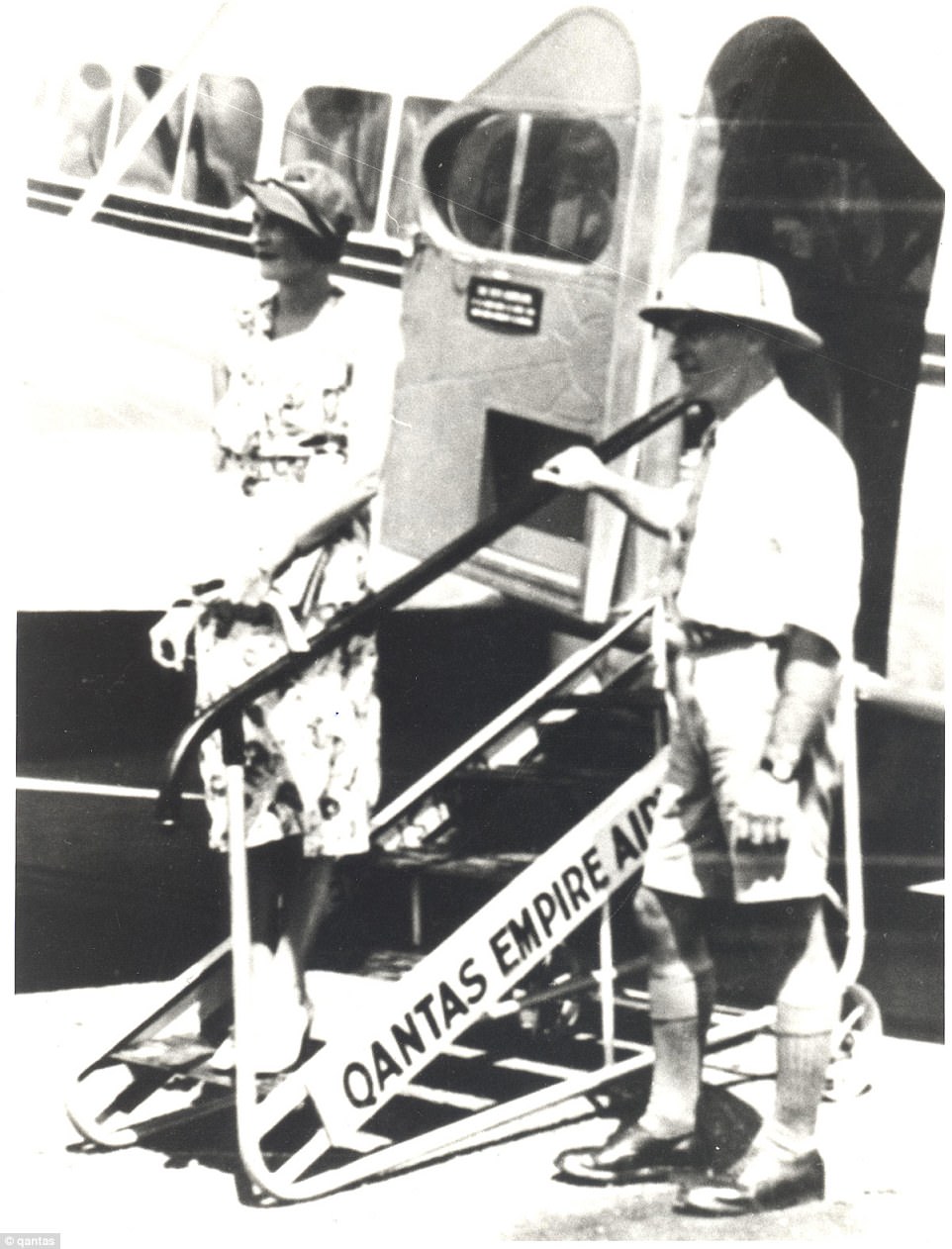 Lady Edwina Mountbatten, whose husband Lord Louis was the Queen’s cousin, arrives (pictured) on the inaugural Qantas flight from Brisbane to Singapore after a gruelling three-and-a-half day journey on the tiny De Havilland plane 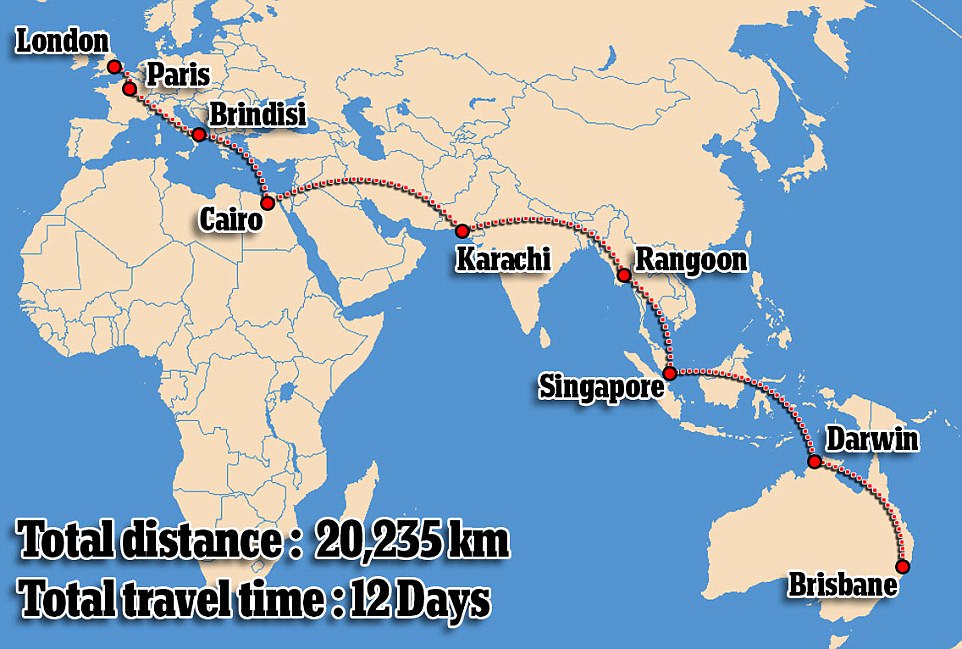 In 1935, air travel from Australia to London was introduced by Qantas in partnership via a series of flights which took 12 days, had up to 31 stopovers (the ten major stops are pictured on the map above) and at 20,525km it was by far the longest air service in the world 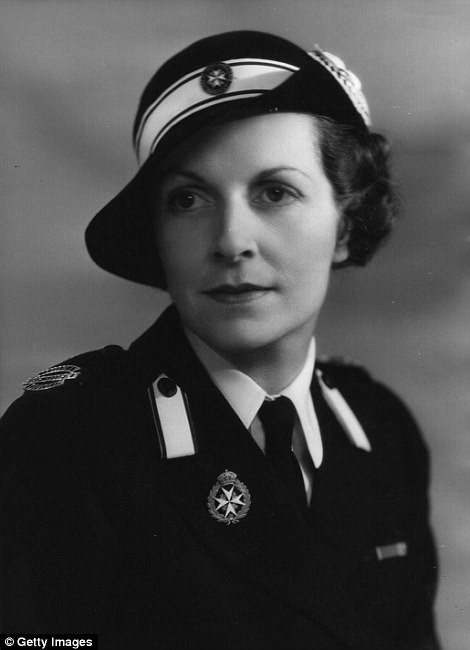 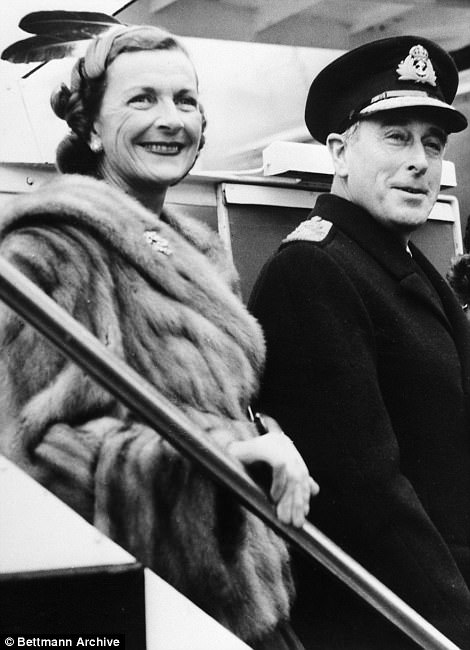 Lady Edwina Mountbatten (pictured in her Red Cross uniform around 1935)  was a passenger on Qantas’ first international flight which left Brisbane in April 1935. The wife of the Queen’s cousin Lord Louis Mountbatten (the couple are pictured, right, in 1954), she used the service to get to Malta where her husband was stationed 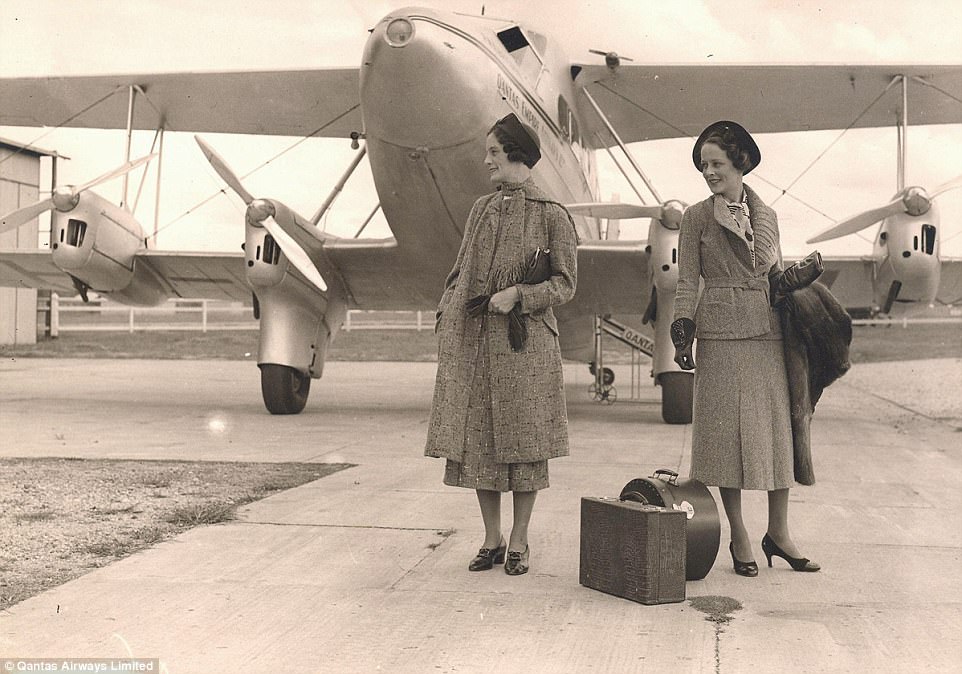 On the first flights from Australia to London in 1935 there were no cabin staff, but gradually Qantas introduced larger planes and passengers could enjoy the relative luxury of service by stewardesses like these pictured

Qantas Empire Airways, as it was then known, began operating its first international passenger service to Singapore on April 17, 1935, flying via the Queensland outback and the Northern Territory.

There was no cabin crew, although the co-pilot handed handed out sandwiches and drinks and the service to Singapore was ‘ridiculously cramped’ due to the large amount of mail aboard the tiny De Havilland 86 plane.

The airfare was £195, which at today’s exchange rate equals $281 Australian, but was equivalent in value to $18,000 Australian then.

Qantas operated in partnership with Imperial Airways, a predecessor to British Airways, and passengers flew in the middle sector on planes operated by Indian Transcontinental Airways.

The service departed from Brisbane once a week and took three and a half days just to reach the Asian city.

The DH86, which had a range of just 1,200km and flew at a speed of 750mph (230kph), stopped at Charleville, Longreach and Cloncurry in Queensland.

The aircraft carried just ten passengers and its mail delivery was hailed as a breakthrough in delivering fast and regular means of communication between Britain and Australia.

The inaugural flight, which was boarded in Charleville by Lady Mountbatten, who was travelling to Malta to meet her husband Lord Louis Mountbatten, the second cousin of the Queen, then a nine-year-old Princess Elizabeth.

There were no through bookings from Brisbane to London on the first service because of heavy sector bookings, but there were two passengers booked through to Brisbane on the next flight that left London on April 20, 1935. 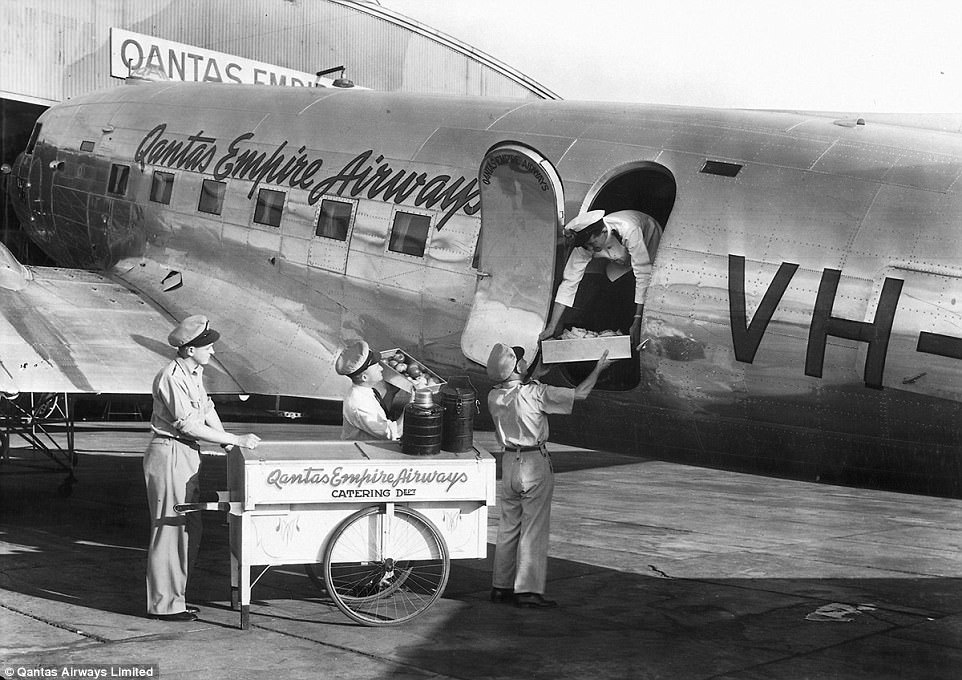 By 1947, when these catering supplies are pictured being loaded on to a Qantas Empire Airways flight at Archerfield aerodrome in Brisbane, passengers travelled for a mere four days to get to London 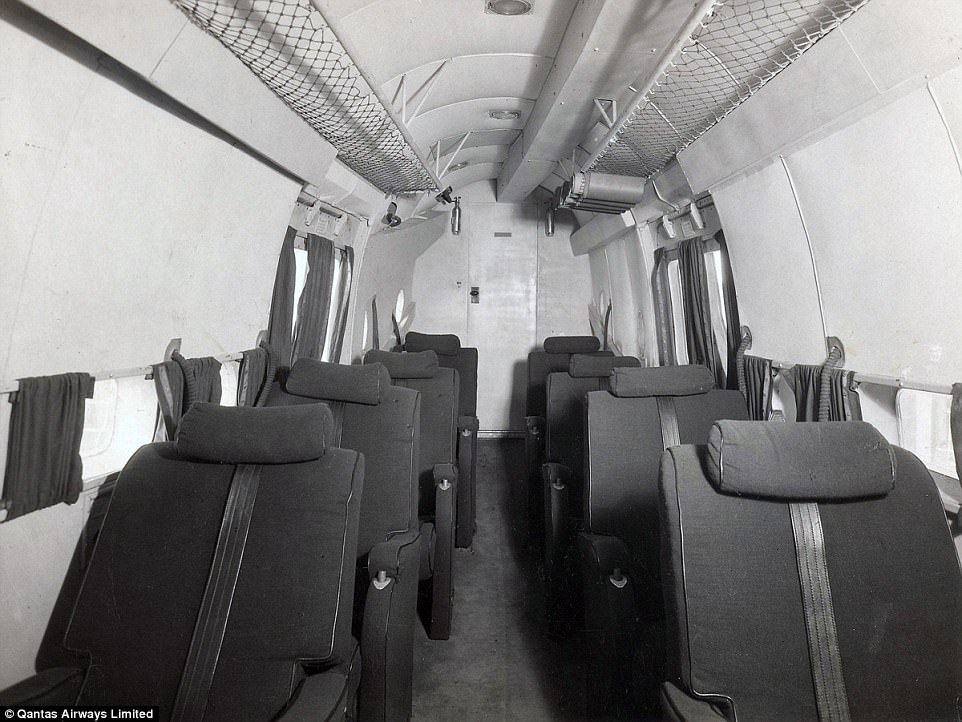 From 1944 in the final years of World War II, travel conditions had been pared back to basic as sen on this Liberator aircraft which Qantas painted the exterior of its cockpit the kangaroo sign for the first time 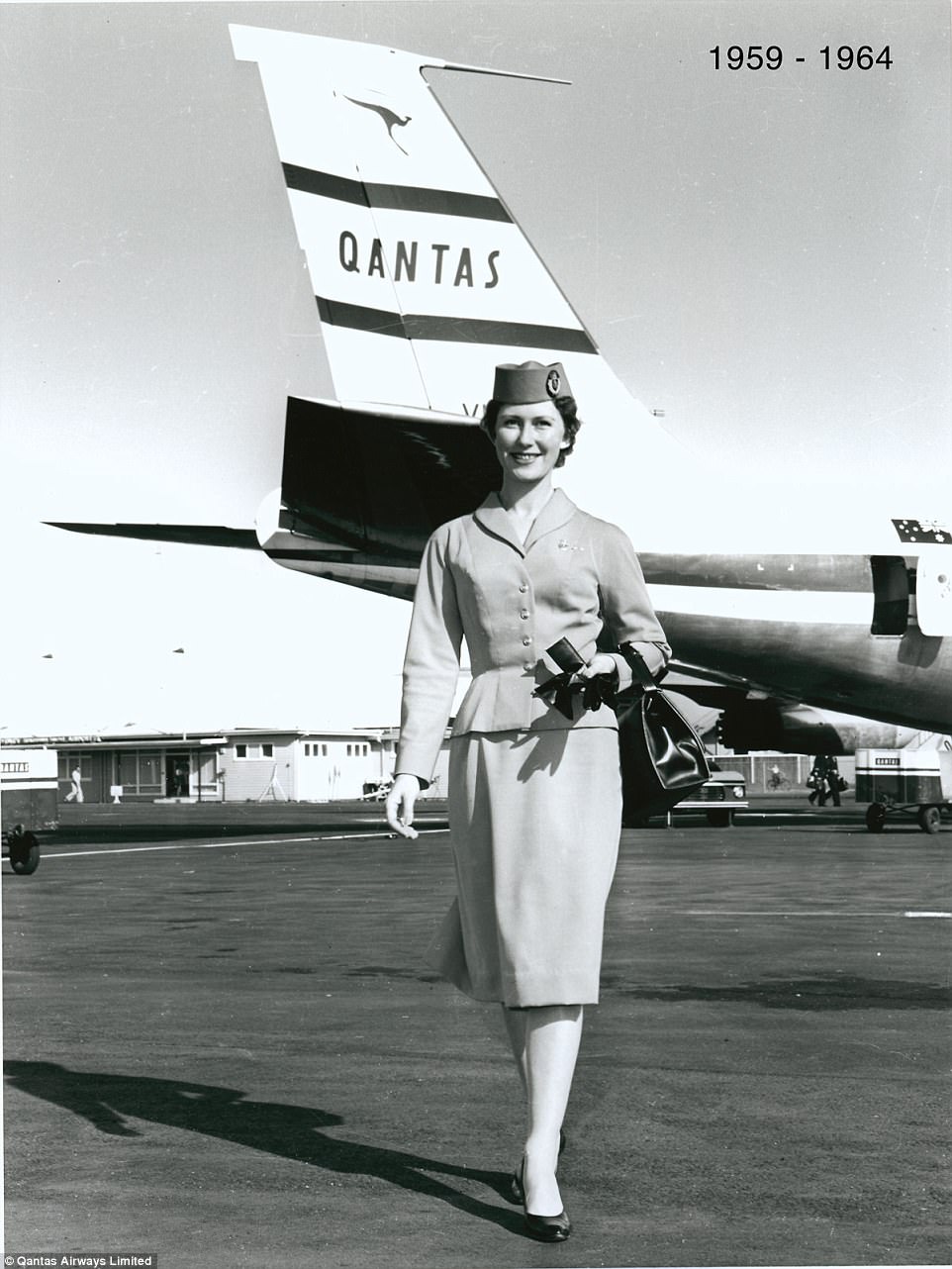 Qantas flight attendant uniforms (pictured, the summer uniform worn between 1959 and 1964) were mostly designed by overseas couturiers until the airline tapped into the talents of local designers, such as George Gross and Harry Who, and Peter Morrissey

After an overnight in Cloncurry, the plane touched down in Camooweal near the Northern Territory border, then stopped at a series of towns and stations en route to Darwin, including Avon Downs, Newcastle Waters, Daly Waters and Katherine.

Passengers spent the night in Darwin and then left for South-east Asia, stopping at Rambang in Indonesia – where they stayed overnight in a humble jungle rest house – then flew via several stops to Singapore.

In Singapore, passengers connected with Imperial Airways, but boarded a planed operated by Indian Transcontinental Airways for Rangoon, Burma, now known as Yangon, the capital of Myanmar.

Just nine passengers could fit into the Armstrong Whitworth Atalanta aircraft which flew from Rangoon to make a night stopover in Jodhpur, India, and then on to Karachi in Pakistan.

In Karachi, passengers would change planes to the slightly larger Handley Page 42W Hannibal, which had greater range and carried 24 passengers.

The flight went via Sharjah in the Persian Gulf, where the plane landed in the desert and taxied in alongside the Imperial Airways Resthouse through an opening in barbed wire entanglements which at night time were closed in.

From there, they flew to Baghdad, Iraq and then on to Cairo. From Cairo to the neighbouring Egyptian city of Alexandria, the flight stopped on the island of Crete and over the Mediterranean to the Italian port city of Brindisi.

From there, passengers had to board a train for Paris, where they took their final flight over the Channel to London abord the relative luxury of a Handley Page 42W Heracles which carried 38 passengers and had stewards serving meals. 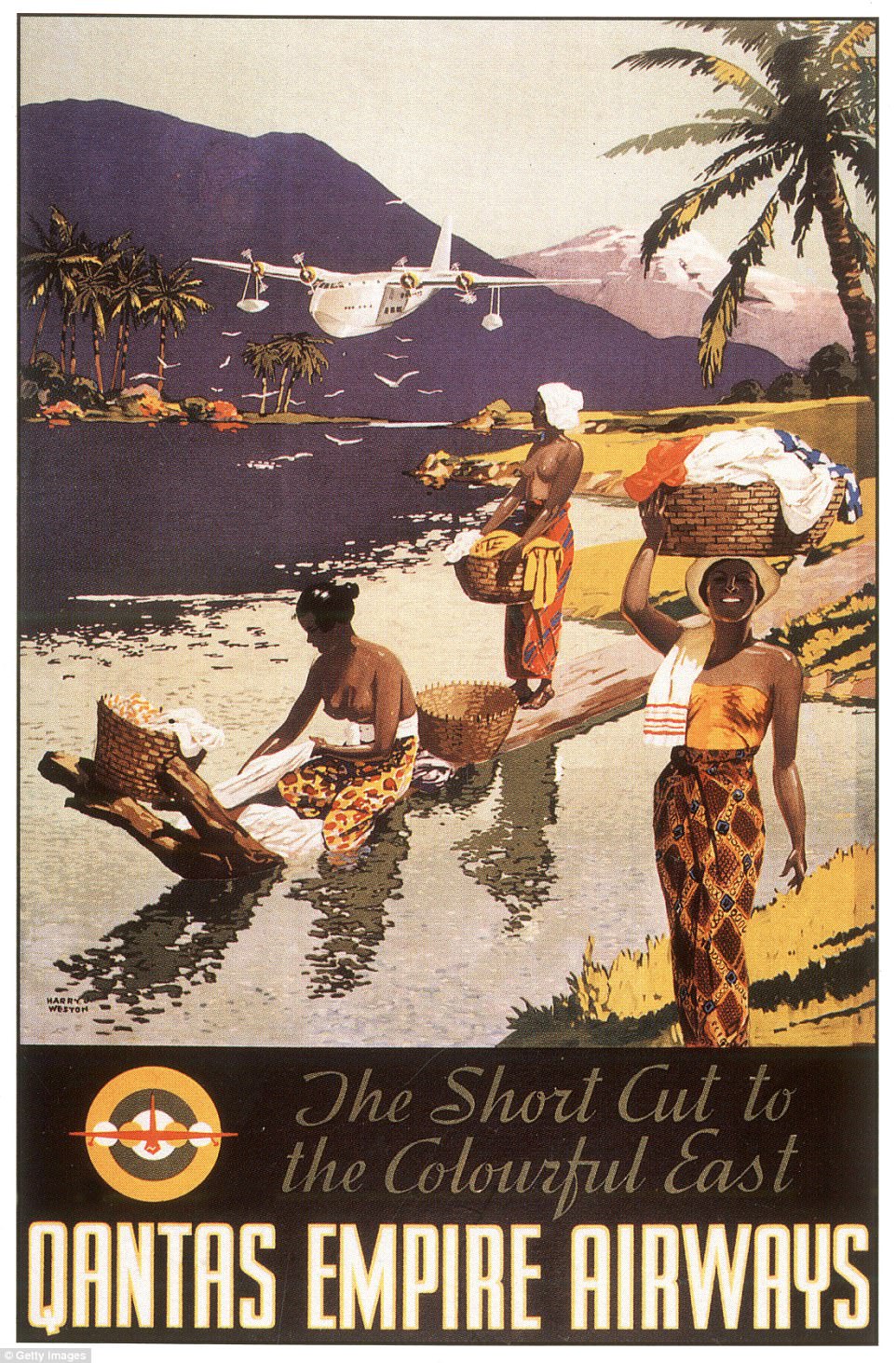 For a brief golden age from 1938, Qantas flew ‘flying boats’ via Rose Bay in Sydney to London via South-east Asia with only one, luxury first class, but the aircraft were targeted by the Japanese air force in World War II 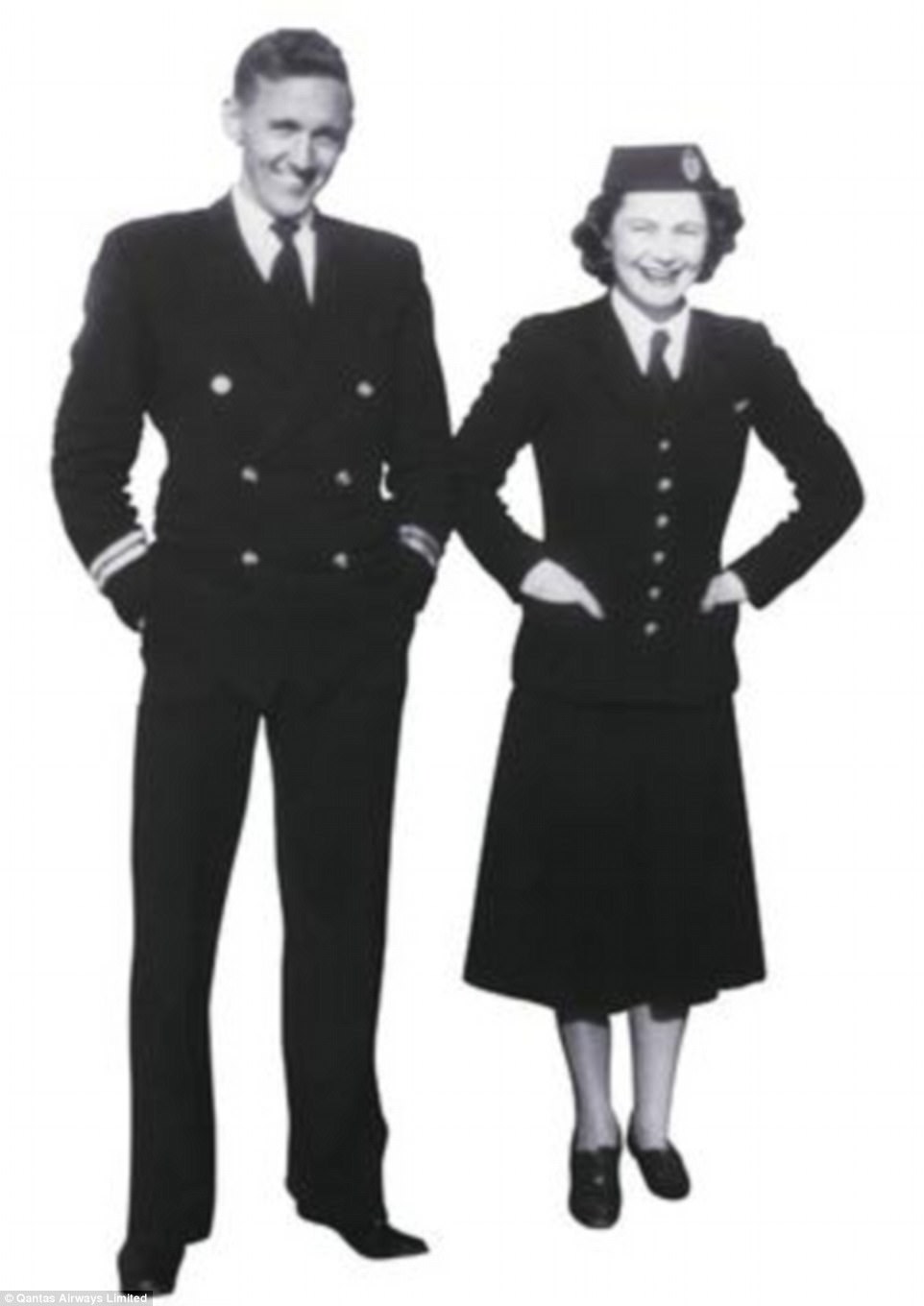 Qantas staff  model winter uniforms in 1948, a year after the airline introduced its history making ‘Kangaroo Route’ on which meals were served and the travelling time from Sydney to London reduced to four days

In 1938, for a brief golden age, Qantas introduced its ‘flying boats’, a first class air service which left for London from Rose Bay in Sydney’s Eastern Suburbs.

Primarily designed to carry first-class air mail, the flying boats carried 15 passengers, a crew of five, and 1400kg of mail and cargo.

But the cabins were no cramped, and so spacious they could be converted for sleeping accommodation at night and passengers could stroll around, chat and smoke

Speeding along at 250km an hour, they reduced the trip to London to an unbelievable nine days, but their reign was curtailed when they became targets of the Japanese air force during World War II.

By 1947, Qantas introduced its ‘Kangaroo Route’ and launched its first solely operated service from Sydney to London. 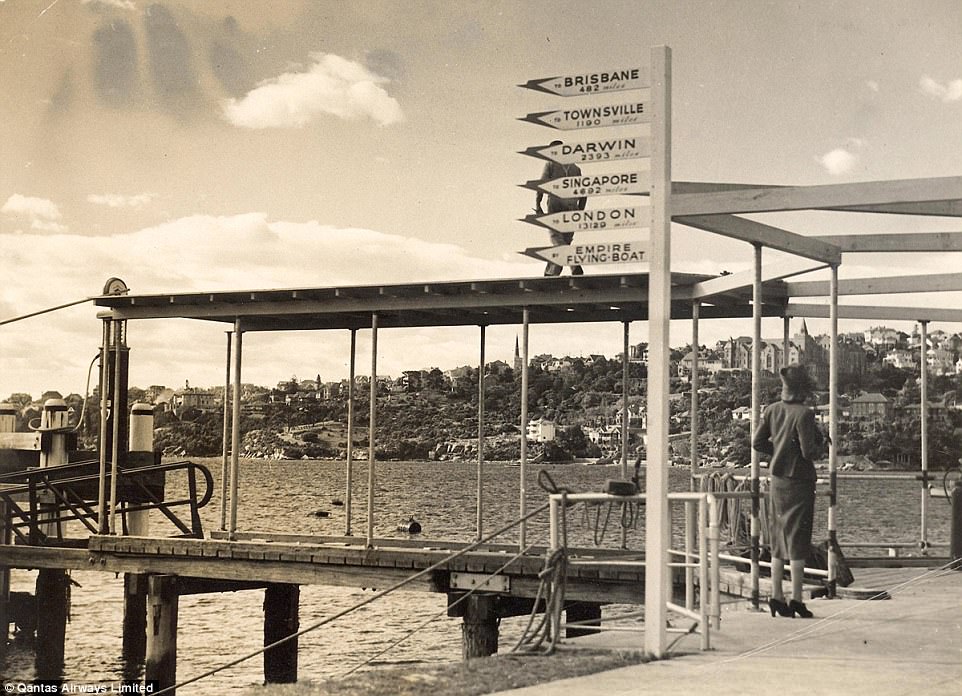 Gateway to the world: Rose Bay flying boat base in Sydney’s Eastern Suburbs in 1939 when the luxury aircraft had a brief reign offering first class travel which contrasted greatly to the cramped planes of four years earlier 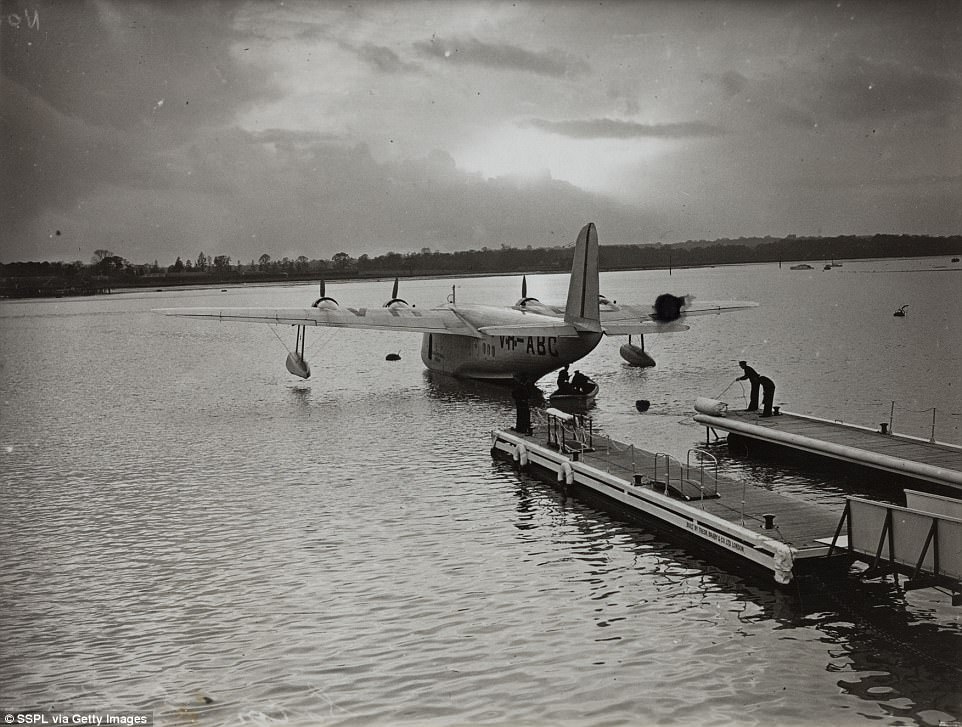 After introducing its first Brisbane to Singapore service in 1935 on tiny De Havilland plane, Qantas expanded its fleet (a Short Sunderland is pictured at Southampton in 1938) with ‘flying boats’ and other aircraft 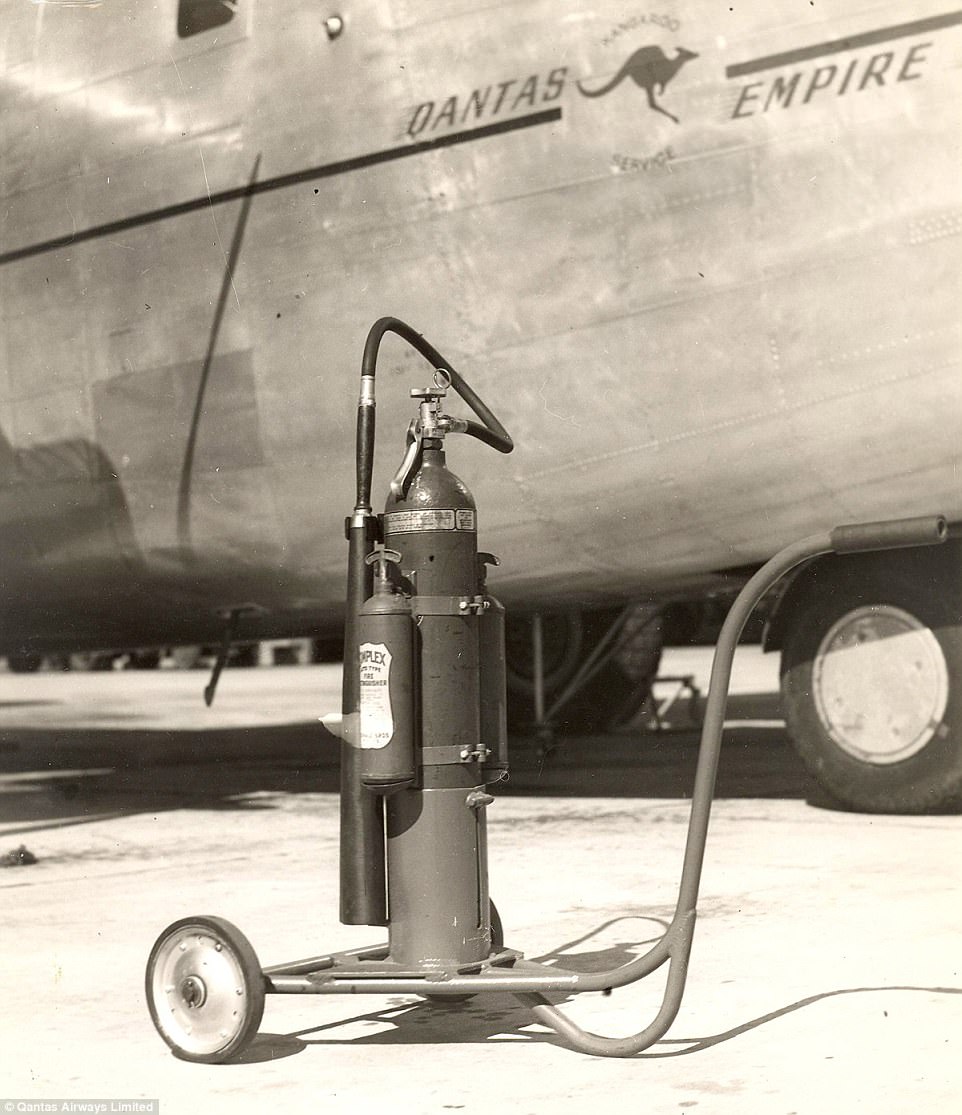 The new service cut the nightmare journey of 1935 to a third of its duration, and provided cabin service and comfort.

Qantas’ first Kangaroo Route service departed Sydney and flew to Darwin and then Singapore where passengers stayed overnight, on to Calcutta in India, Karachi and Cairo overnight.

The Constellation aircraft, which carried 29 passengers and 11 crew, flew on to Tripoli in Libya before arriving in London.

The four night journey took more than 93 hours and included 55 hours in the air and was later described by Qantas as a history making ‘momentous step in Australian aviation which literally brought Australia closer to the rest of world’. 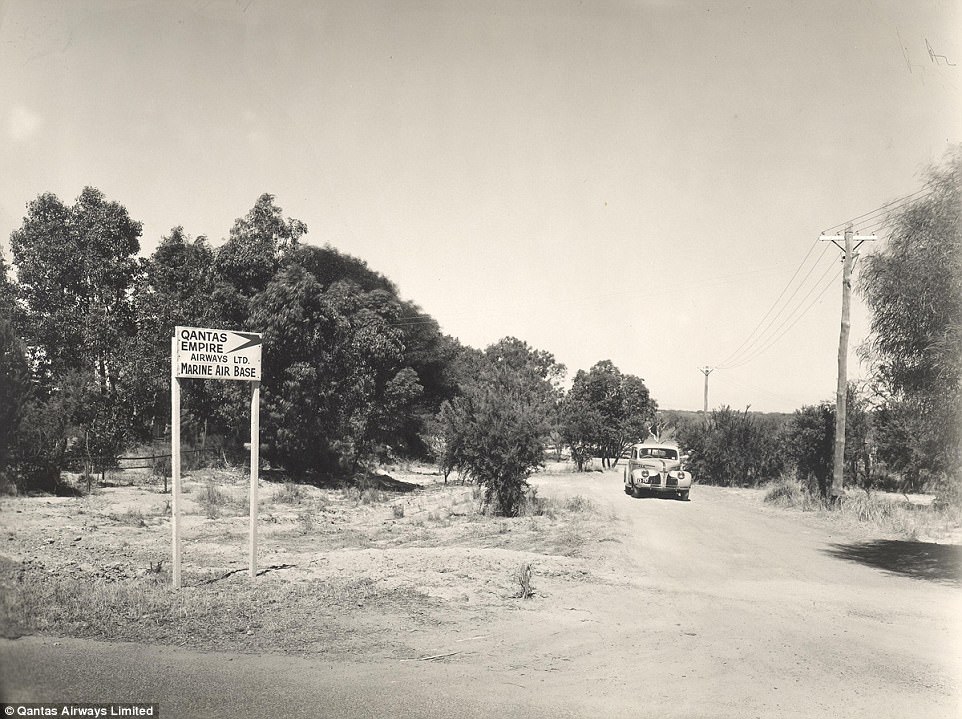 Qantas marine air base, pictured in the 1940s, when the airline operated ‘flying boats’ which sped along at 250km an hour and reduced the trip to London to an unbelievable nine days