A magnificent 7 …with a future as bright as England’s 11!

Good morning – not from Moscow. Which is where I would have been today, should England have made it through to the World Cup Final. A pal and I had everything on hold: flights, visas, hotel, tickets, heart attacks, the lot, ready for an early Saturday morning departure from East Midlands Airport. Alas, though, it was not to be.

‘Don’t worry, Dad, we’ll probably make it to the final in 2022 – we can both go then,’ simpered Noah, my nine-year-old. Bless him, little does he realise that’s not necessarily how it works when it comes to England and football, but then again, who knows? Gareth (Sir Gareth come Christmas, surely) and his reinvigorated Lions could well go on to become the international footballing giants of their generation. Well done all, you gave us a World Cup journey many of us doubted we would ever experience again. I don’t know about you, but just writing that makes me smile. 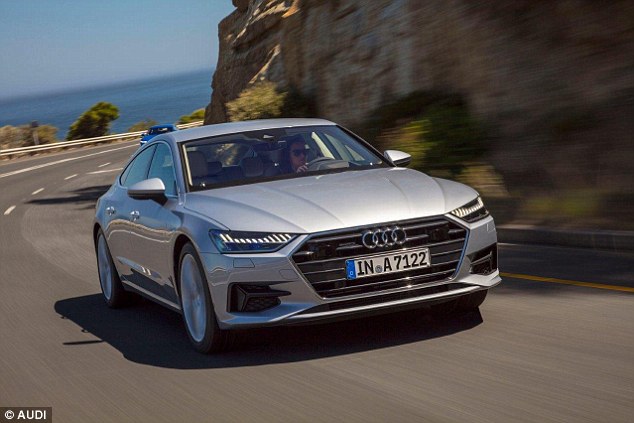 The Audi A7 Sportback looks rather fabulous, especially for such a big chunk of tin and rubber

Back to the business at hand, then, and the Audi A7 Sportback.

Initially I was sceptical about the name. Technically, this all-new Audi airport limo does have a Back that’s a bit Sporty, but suggesting it’s sporty uber alles is like a fat bloke stretching a tracksuit top over his gut and immediately claiming the status of an elite athlete.

It does, however, look rather fabulous, especially for such a big chunk of tin and rubber.

The front is dominated by the massive signature grille, home to a new high-tech camera that improves the efficiency of the stop/start feature by detecting when the car in front begins to move and restarting the engine automatically.

But it’s from the central B-pillar back that the new, aerodynamic styling really catches the eye, to the extent it almost conjures up the image of a giant, mythical coupé awaiting its new master. In profile, the sleek, frameless door glass helps accentuate this feeling, while round the back an all-encompassing Cadillac-style monobrow tail-light underlines the presence of a bold yet subtle design intent on being noticed. What could have ended up as a bloated frog requiring the kiss of a beautiful maiden to become a handsome prince has landed fully formed, ready for its Men’s Health magazine cover shoot.

Talking of stylish and beautiful, A7 owners can now impress the neighbours come nightfall with its glitzy new light show, as the front and rear clusters come on in an episodic, Knight Rider-esque animated sequence. Why? Because they can, you’re worth it – and it looks cool.

As for the important stuff, opening the immense tailgate reveals enough luggage space to accommodate many, many high street purchases. The only caveat being that the boot is one of those deep, dark and cavernous spaces that reminds the midlife creaky-back brigade (ie, me – and probably you!) that we are only one awkward stretch away from a slipped disc.

Back to that rakish design, which looks fantastic on the outside but therefore must obviously compromise headroom in the rear. And yes it does, although thankfully not enough to ruin your latest hairdo. That’s unless you draw the short straw and get stuck on the over-tight, over-titchy, over-elevated middle seat.

Up front, there is plenty of room but it doesn’t feel chauffeur spacious. There’s also plenty of eye candy for one to meditate on in the shape of a stunning minimalist dashboard and a twin set of 12.3in touchscreen wonders to be played with. A little less sensitive to my touch than I would have liked, however. Maybe it was the heat, but on more than one occasion I had to touch, press and repeatedly prod various icons to make anything happen. This included the zonal (ooh!) ambient lighting system. You want glowing red footwells, ice-blue illuminated armrests and a burnt-orange upper trim line, all at the same time? Then prod away and (eventually) a rainbow of joy will be yours to behold.

To drive, the 3.0-litre 286hp turbo diesel is relatively quiet, at least to begin with. The higher the rpm thereafter, the louder the thrum, until things settle down again. The ride is comfortable, although not to luxury limo standards, and becomes even firmer when Sport and Dynamic modes are selected. As for handling, the legendary Quattro drive system is second to none, enabling the A7 to cope admirably with everything from a bumpy, winding A road to a tight, twisting and undulating country lane. 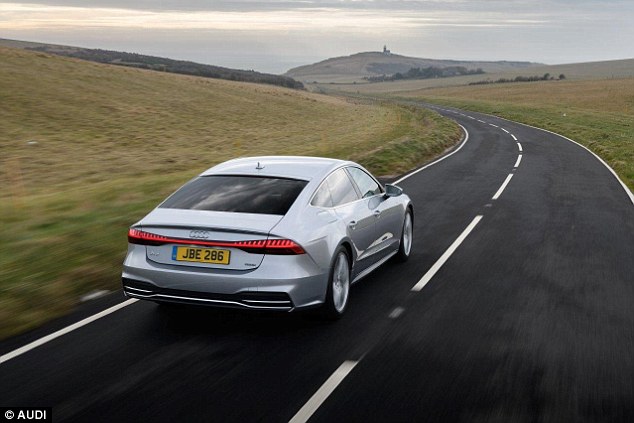 To drive, the 3.0-litre 286hp turbo diesel is relatively quiet, at least to begin with. The higher the rpm thereafter, the louder the thrum, until things settle down again

The major driving headline, however, is nothing to do with any of the above, but something referred to as ‘mild hybrid’ technology. A system that automatically switches off the engine, replacing it with 48 volts of electric power, as and when such power has been adequately harvested and is available. This kicks in between 34mph and 99mph whenever the car recognises a steady cruise, in bursts of a maximum 40 seconds (for now). Not that you would know any of this is happening, as the transition from one power source to another is so smooth it’s undetectable. The car is also ‘future ready’ for more technological wizardry, as and when the factory and Brussels agree it’s OK to unleash whatever’s going to mess with our tiny little minds next.

The A7 ticks nearly all the boxes, then, except perhaps those marked excitement, refinement and power (although there is already a substantially more powerful V6 petrol version available and yet more grunt on the way, we are told). It’s a good-looking, sophisticated, old-school German motorway-muncher, with one eye on tomorrow as opposed to one foot in the past.

Not unlike our newly reborn England team. Football may not be coming home just yet, but our wonderful team will be later on today. I do hope this means one of those open-top bus parades. Come on England!