‘This is the worst of society’: Sickening moment an ‘animalistic’ reveller repeatedly slams a policeman’s head into the concrete after wild brawl on the streets of Melbourne

Sickening footage of a policeman getting his head repeatedly slammed into the concrete has emerged.

The alleged attack occurred after emergency services were called to a brawl on Fitzroy St in Melbourne’s St Kilda at around 3am on Sunday.

The footage, captured by shocked bystanders, showed a man, wearing a grey t-shirt and light-coloured pants, hold the head of the officer in his hands and slam it several times into the pavement.

Just moments before the attack, police had been chasing a 26-year-old man through the streets of St Kilda.

After closing in on the man, the two policeman were then surrounded by an angry mob of six or seven.

As the officer attended to the alleged attacker, the mob pounced and violently assaulted him and the other officer.

Victoria Police Superintendent Tony Silva described the attack as ‘animalistic’ and one of the worst he’s ever witnessed.

‘I would describe it as rag dolling him, smashing his head into the concrete roadway,’ he told Nine News.

The officers only managed to disseminate the gang after using capsicum spray.

The officers were rushed to hospital suffering serious bruising and swelling to the face, with one expected to undergo surgery tonight.

Victoria police have slated the group, saying they had a pack mentality and took advantage of the vulnerable police officer at the time he was attending to the suspect.

‘This is the worst of society… they will find the full force of the law is their future,’ Mr Silva said.

Victoria Police have stated that no expense will be spared as they make an appeal for anyone with any knowledge or footage of the incident to come forward.

All suspects, believed to be five men and a woman aged in her 20s, are described as having a Caucasian appearance. 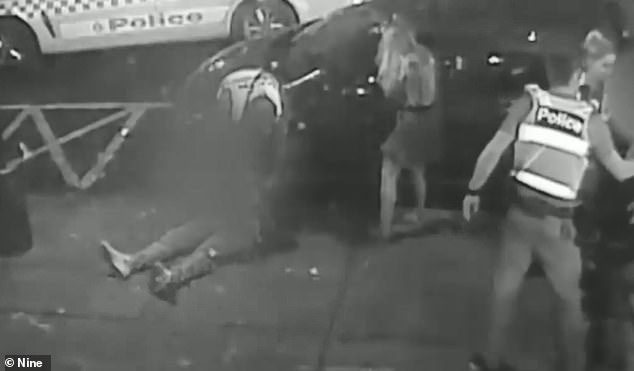