It has often been argued that the romantic vision we have of Scotland is based on myth, not reality… This new exhibition tries to get to the truth

Bagpipes, tartan, thistles and lochs – such things are the basis of Scotland’s tourist industry. And, to some extent, Scotland’s national identity too. It has often been argued, though, by the likes of historian Hugh Trevor-Roper, that the romantic vision we have of the country is based on myth, not reality.

A fascinating new exhibition in Edinburgh – part of the Edinburgh Art Festival – tries to get to the truth. Its title comes from a line of verse by Byron – ‘Oh, for the crags that are wild and majestic!’ – in which he favourably compared the Cairn-gorm mountains to any ‘tame and domestic’ attraction in England.

Among the oldest exhibits is a pair of portraits from 1714, depicting two of the Grant clan’s retinue in tartan clothes. One subject is a soldier, seen brandishing a sword; the other is a musician, blowing heartily into a set of bagpipes. 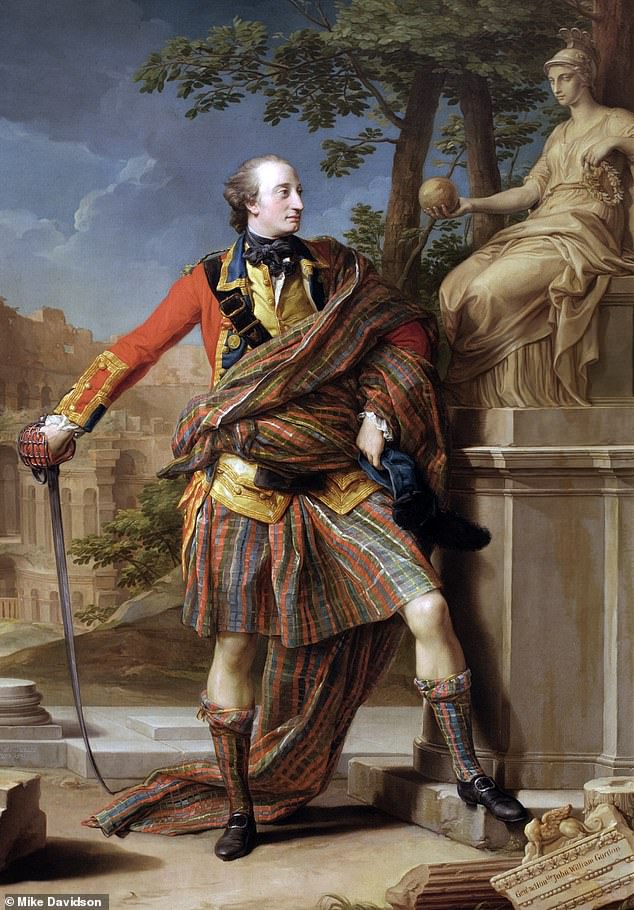 Bagpipes, tartan, thistles and lochs – such things are the basis of Scotland’s tourist industry (Colonel William Gordon, 1766, by Pompeo Batoni)

Both pictures are from Castle Grant, near Inverness: the key point being that these weren’t romantic portraits of an imagined past. The artist (Richard Waitt) carefully documented the appearance of real people in Grant clan tartan.

The show also considers the legendary bard Ossian, whose ancient Gaelic poetry was discovered and translated in the 1760s by Highlands schoolmaster James Macpherson.

It proved so popular across Europe that Ossian was dubbed ‘the Homer of the North’.

Debate has long raged about the extent to which the poems were genuine or Macpherson’s invention. But either way, they brought into mass consciousness the idea of a heroic, old civilisation in the Scottish Highlands – duly inspiring work by Beethoven, Coleridge and French painter Ingres, among others.

There were more Scottish soldiers in the army that defeated Bonnie Prince Charlie at Culloden than he had in his own army.

Another important figure in this show is Bonnie Prince Charlie, whose rout at 1746’s Battle of Culloden saw Jacobite claims to the British throne end for good. In the aftermath came strict clampdowns by London on clan freedoms: the wearing of Highland dress, for example, was outlawed.

As Culloden receded into the past, though, and the Hanoverians established themselves firmly as Britain’s Royal house, attitudes towards the Scots softened. English tourists started flocking north in great numbers, enjoying pursuits such as grouse shooting and salmon fishing.

By the early 19th century, the Highland Society of London had been set up – one of its missions being to compile an archive on the tartans historically worn by different clans.

This exhibition includes some of the items sported during King George IV’s visit to Edinburgh in 1822. The monarch witnessed a lavish parade, organised by the writer Walter Scott, for which locals were asked to wear kilts and carry traditional Highland weapons, such as the dirk and the dagger.

The King was thrilled – unaware, it seems, that Edinburgh was actually part of the urbanised, Anglicised Lowlands.

This episode goes to show that the ‘wild and majestic’ vision we have of Scotland today is rooted in neither fact nor fiction – but a mixture of the two.