A Pepsi vending machine mysteriously ended up in the middle of a potato field in Canada, and Twitter users went wild with theories as to how it got there.

The Royal Canadian Mounted Police (RCMP) sent out a news release this week stating that a Pepsi vending machine was discovered in a potato field in Grand Falls, New Brunswick on September 29. After exhausting their own theories regarding the unusual situation, they turned to the public for help.

Global Halifax reporter Rebecca Lau shared a photo of the abandoned vending machine on Twitter Wednesday, and people were quick respond to the post with insane theories and hilarious comments about the breaking news.

Breaking news: A Pepsi vending machine was discovered in the middle of a potato field in New Brunswick, Canada on September 29 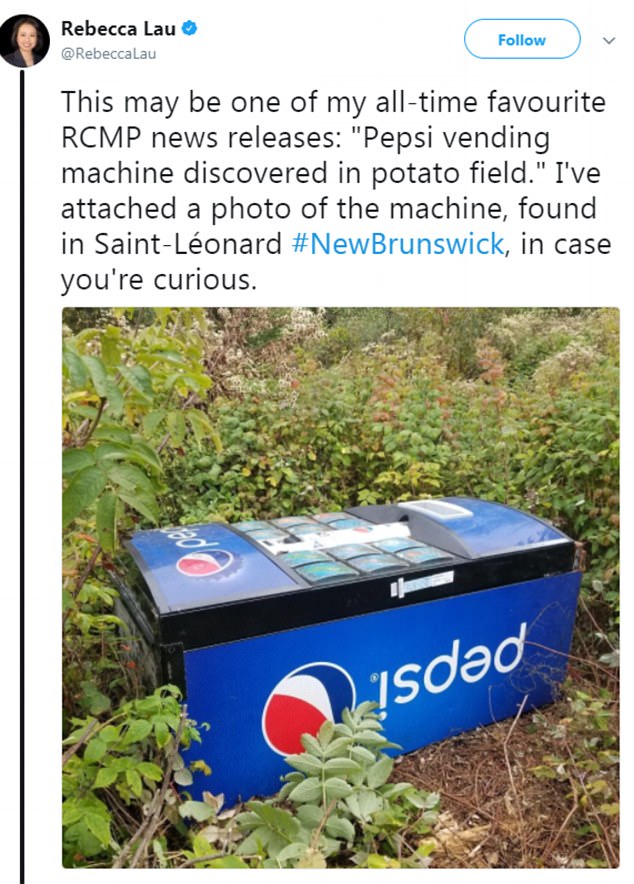 Spreading the word: Royal Canadian Mounted Police (RCMP) sent out a news release asking for the public’s help this week, prompting Rebecca Lau to tweet a photo of the machine

Invested: The Global Halifax reporter urged people to call the RCMP if they had any information about the abandoned machine 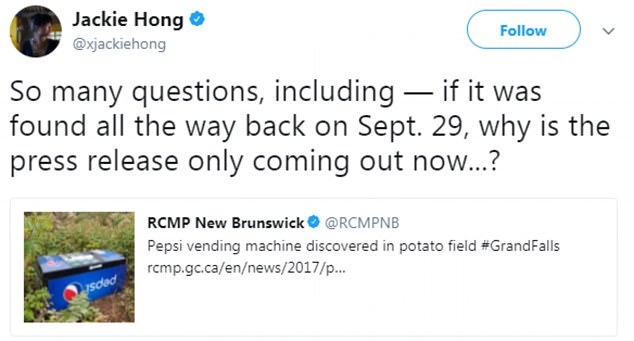 Cold case: Some people asked why the RCMP waited three months to send out the press release regarding the mysterious situation

The tweet brought up plenty of question for people, including Jackie Hong, who asked: ‘If it was found all the way back on Sept. 29, why is the press release only coming out now…?’

In the comments section, Lau explained that the RCMP only released the photo because ‘attempts to locate who may own the machine have so far been unsuccessful.’

When responding to the news, Jeremy Boucher couldn’t resist a little word play, writing: ‘This is soda pressing to hear.’

Rob Imossi referenced Kendall Jenner’s controversial Pepsi ad from earlier this year while sharing his theory about what happened.

‘Two nights before, there was a protest – about how farmers treat potatoes – in the field,’ he wrote. ‘The police turned up. It got ugly. Potatoes were thrown.

Hilarious: Once the news alert circulated around Twitter, users couldn’t stop joking about the bizarre story 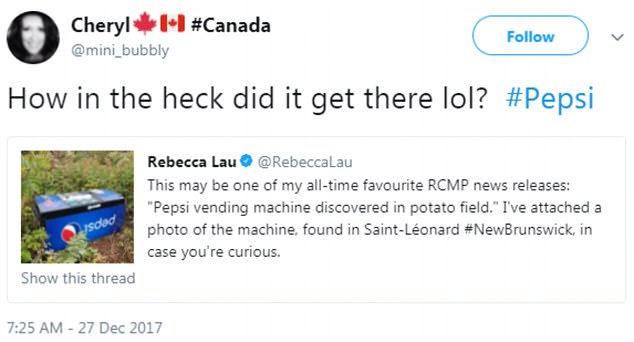 True: This woman’s question was the same one on everybody’s mind 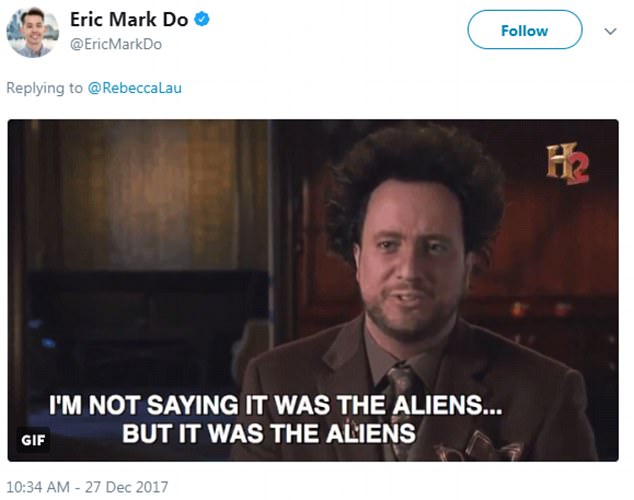 Aliens: Eric Mark Do said it must have been aliens that dropped the machine off in the field 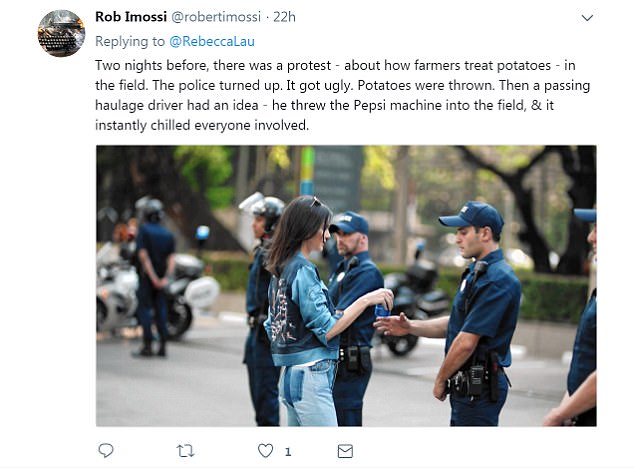 Just a guess: Rob Imossi referenced Kendall Jenner’s controversial Pepsi ad from earlier this year while sharing his theory about what happened

‘Then a passing haulage driver had an idea – he threw the Pepsi machine intot he filed, & it instantly chilled everyone involved.’

The CBC News Alerts Twitter account also tweeted that the RCMP was ‘appealing for public’s help,’ prompting Steve Patterson to write: ‘This is officially the “Stonehenge” of Canada.’

RCMP Const. Daniel Levesque of Saint-Leonard, N.B. shared with The Canadian Press that ‘one vending machine was traced to a local Walmart in Grand Falls, but the serial number on the Pepsi machine didn’t match reports of any stolen machines.’

Four hours after the initial press release, a  representative from Pepsi contacted the RCMP to help them track the vending machine’s owner — which the same Walmart in Grand Falls.

Coca Cola: While there were hilarious Pepsi tweets, some of the funniest ones blamed Coca-Cola for the mishap

Jokes: Guy P. Ratchford joked that he was sending this ‘thoughts and prayers’ to Pepsi 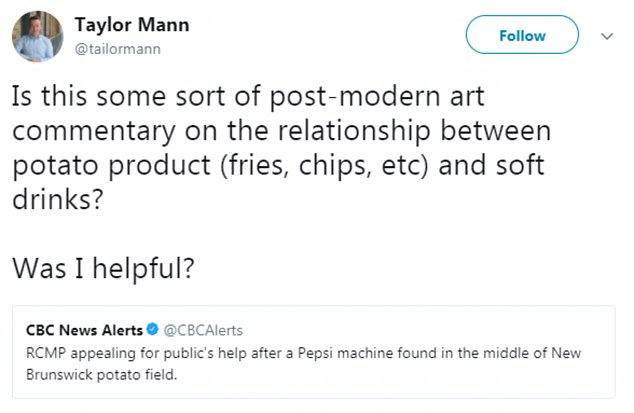 Help: After the RCMP asked the public to help in their searches, one user jokingly asked if the situation was ‘some sort of post-modern art commentary’ 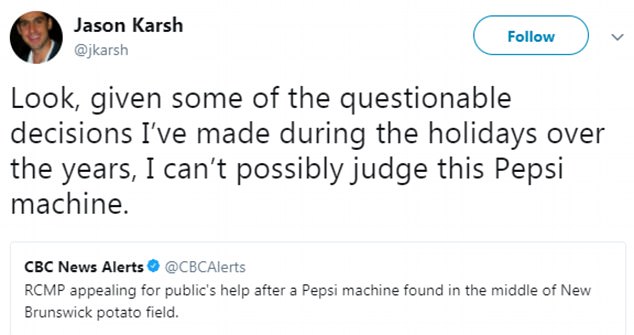 No judgement: One man joked that he can’t judge the Pepsi machine for whatever it did to end up in the field, as he did some pretty messed up stuff himself this holiday season 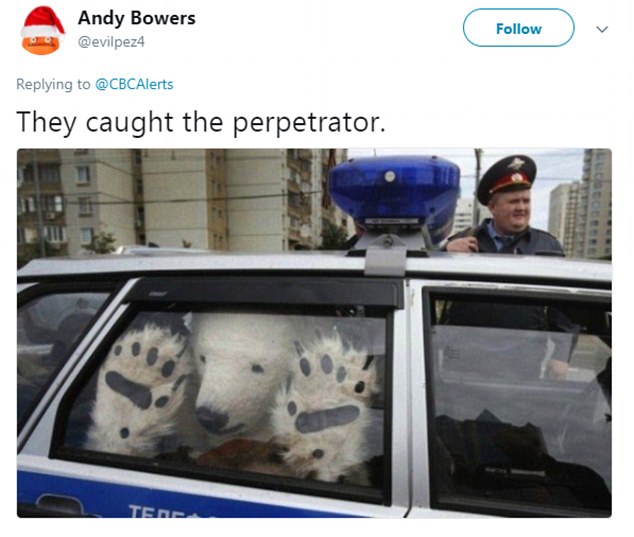 Caught: Sharing a photo of a polar bear trapped in the back of a police car, one user hilariously joked that he was the perpetrator

As if the initial press release wasn’t enough to send people into hysterics, Twitter once again lost it when CBC News Alerts tweeted that the police had discovered where the machine had come from.

In reply to the news that the owner of the machine was found, one user hilariously shared: ‘My eyes have teared up knowing that the RCMP are able to reunite the lonely Pepsi machine with its rightful owner.’

Some of the other wildly funny comments were: ‘Oh god…I was up all night worrying about this…now my mind is at ease’ and ‘Now I’ll be able to sleep tonight.’

While another person shared: ‘Obviously one of the potatoes was a snitch.’