She’s been enjoying the holiday of a lifetime in Greece for the past week.

And Laura Hamilton treated fans to another glimpse into her lavish Greek getaway as she uploaded a snap of to her Instagram account showing her onboard a jet ski over the weekend.

The A Place In The Sun presenter, 40, looked incredible in a white swimsuit – just days after sparking speculation she may be reconciling with her estranged husband Alex Goward.

Fun: Laura Hamilton looked incredible in a white swimsuit on board a jet ski on holiday in Greece days after sparking speculation she may be reconciling with ex-husband Alex Goward

The trip to Greece is the couple’s second holiday together in the space of three months.

It comes weeks after they were both pictured at the exclusive La Manga Club in Spain during May half-term.

On Sunday, the property expert also uploaded another stunning shot of her overlooking Fiskardo Bay. 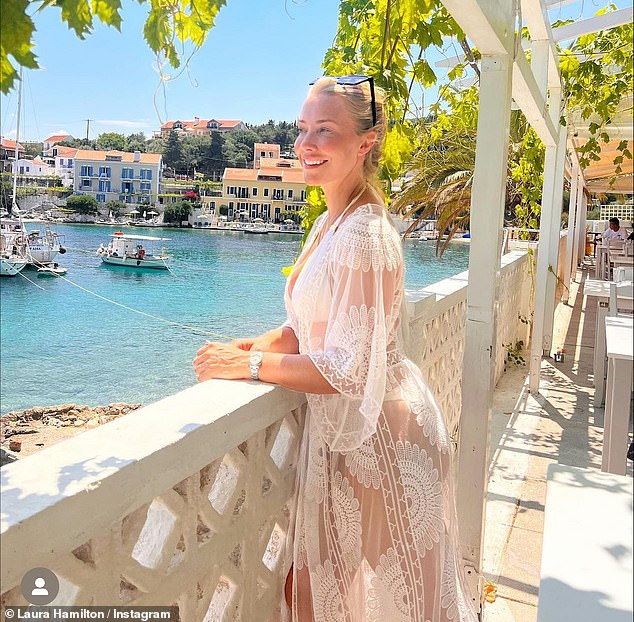 Views: On Sunday, the property expert, 40, also uploaded another stunning shot of her overlooking Fiskardo Bay

The TV personality looked radiant in a floor length lace kimono as she took in the stunning scenery.

She opted to go makeup free for the photo, letting her naturally beautiful features do the work while placing her sunglasses on her head.

While Laura failed to include an image of Alex, 41, in her latest posts, the insurance broker did join her in the holiday resort of Kefalonia last week. 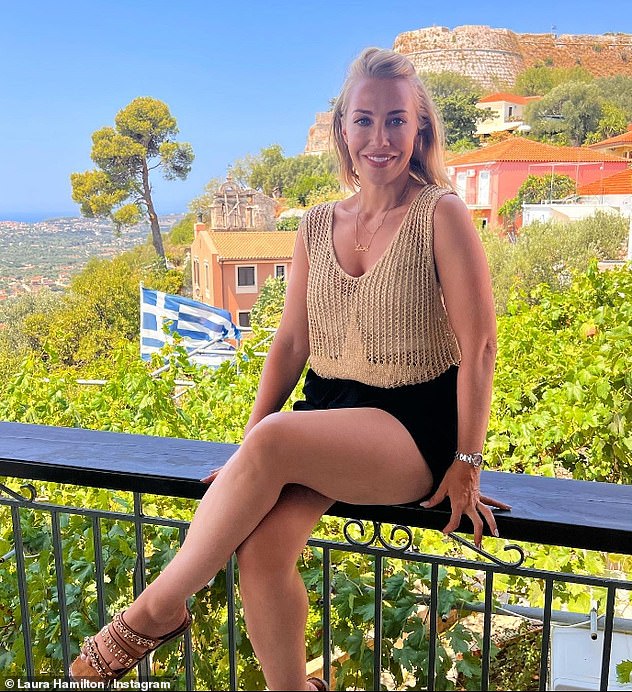 Reunited? Laura has sparked speculation she may be reconciling with her ex-husband Alex Goward after the pair enjoyed a second holiday together in the space of three months

On both occasions Laura and Alex, who announced the end of their nine-year marriage in January, documented their trips on social media.

They did not include pictures or mention each other in the respective updates, in a bid to keep their reunion under wraps.

A source said: ‘Laura and Alex clearly had a very amicable split and enjoy spending time together.

‘If that wasn’t the case, they wouldn’t dream of going away together. A spark must still be there between them and evidently they don’t want to make it too public.’ 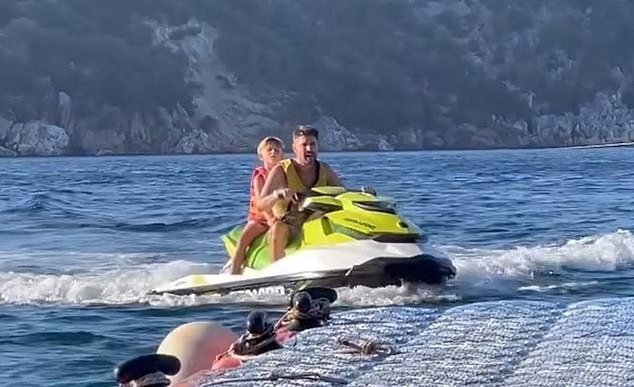 Couple: The A Place In The Sun presenter, 40, was joined by insurance broker Alex, 41, in the Greek holiday resort of Kefalonia this week (Alex pictured with son Rocco)

During their latest jaunt, Alex shared a story on his Instagram jet skiing, tagging in Kefalonia as his location.

Meanwhile, Laura posted an Instagram story saying she was in Kefalonia filming a new episode of her popular Channel 4 travel show.

MailOnline has contacted representatives of Laura Hamilton for comment.

In May, during a break in Spain with their two children Rocco, eight, and Tahlia, six, they were equally secretive, sharing similar snaps of the exclusive La Manga Club resort overlooking the golf club from their balcony. 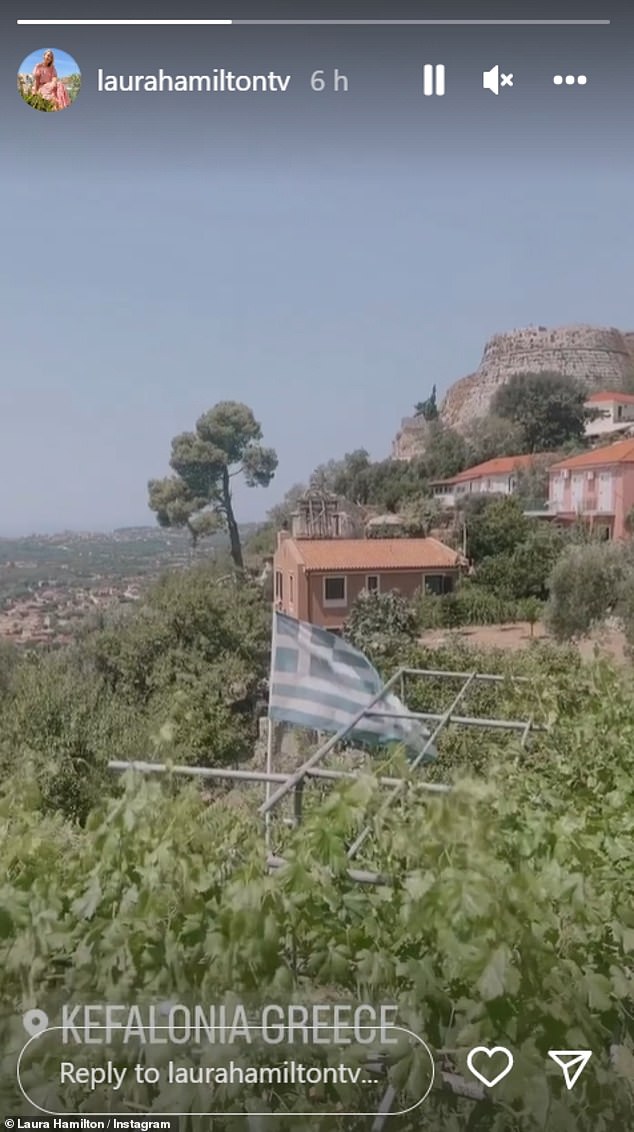 ‘Beautiful’: Laura shared some scenic snaps of her trip to the idyllic Greek island

She also uploaded snaps of their kids playing in the pool, including one of her relaxing with a drink wearing a plunging red swimsuit at the £400-a-night retreat.

Laura announced their shock split in May, taking to Instagram to post a picture of a framed message which read: ‘Don’t cry because it’s over, smile because it happened.’

Alongside it, she wrote: ‘This isn’t something I ever thought I’d be saying but, after 13 years of being together Alex and I have separated. 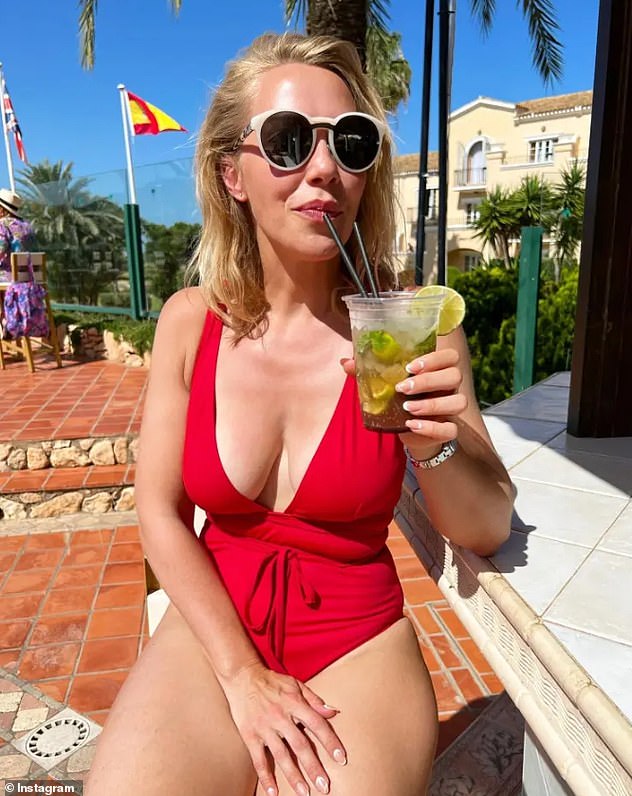 Holiday: It comes weeks after they were both pictured at the exclusive La Manga Club in Spain during May half-term

‘Our children are and always will be our number one priority and we would respect privacy for our family at this time.’

The message was posted weeks after herself and Alex enjoyed a trip to Lapland with their two kids.

Shortly after the split was confirmed, Laura revealed she had moved into a new property in Surrey, close by to their marital home, revealing she was in the midst of a big renovation.

The former couple also owned a coffee shop in Purley called Lord Roberts on The Green but three months after the break-up, it changed ownership to Ghazala Akhtar. 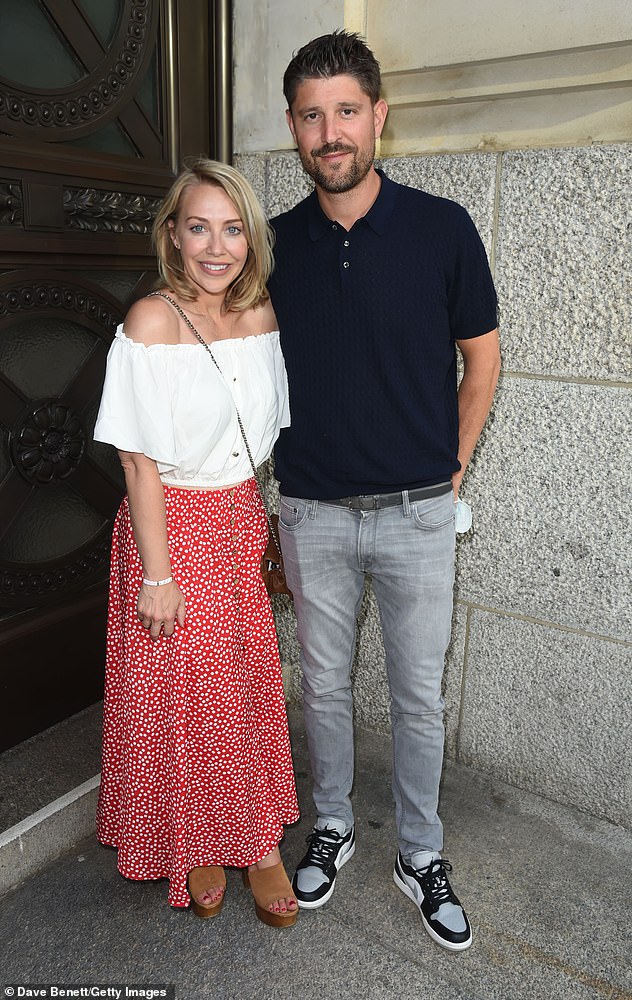 Breakup: Laura announced their shock split in May, taking to Instagram to post a picture of a framed message (pictured together in June 2021)