Awards season finally comes to a close next weekend with the Oscars, but it has not been a kind one for Rosamund Pike. It got off to an encouraging start with a Golden Globe nomination for Best Actress but since then… nothing. No Bafta nod, no Oscar nomination, nothing.

Which is a shame and something of an injustice, as Pike is fabulously good as the ferociously unbiddable war correspondent Marie Colvin in A Private War. It’s a part that almost instinctively you feel Pike wouldn’t be right for – too young, too pretty, too refined – and yet she rises to every one of its many considerable challenges, cleverly avoiding the potential for overplaying at every impressive turn. And what potential there is.

Not only did the passionately committed Colvin sport a piratical eye-patch (her left eye was badly damaged by a rocket-propelled grenade in Sri Lanka in 2001), but throughout a career that took her to all the world’s major trouble spots – Iraq, Afghanistan, Libya and, finally and tragically, Syria – she was hot-tempered, alcoholic and suffered from post-traumatic stress disorder. Casual sex was another of her chosen anaesthetics. 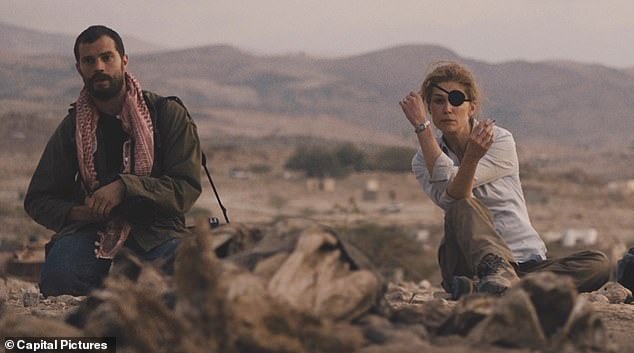 Given that sort of material, lesser actresses might have gone wildly over the top; Pike, however – even mastering Colvin’s deep, guttural semi-American growl – pitches it just right. Many years from now, when she looks back at her career, this is one of those roles she can be rightly proud of. So why hasn’t the film made a bigger impact with award voters?

One reason might be the simple passing of time. It’s almost exactly seven years since the New York-born but London-based Colvin was killed by a Syrian artillery shell in the besieged enclave of Homs, and memories fade unfairly quickly.

That said, it was only last month an American court provided a very timely reminder, ruling that the Syrian government had been responsible for her death and ordering the Assad regime to pay her family $300 million in damages. 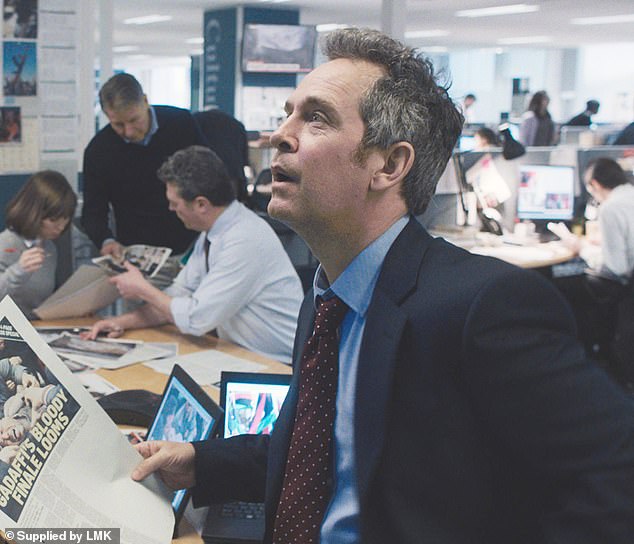 Although this is that strange thing – a serious film guilty of taking itself too seriously. The main casualty of this is the normally excellent Tom Hollander (above) who plays Colvin’s editor

Then there’s the fact that these sorts of films do seem to struggle. Three years ago, Whiskey Tango Foxtrot, the story of journalist Kim Barker, battled to make a profit, let alone win awards, despite starring Tina Fey and Margot Robbie and being played for more laughs than are on offer in A Private War.

Any film that gets under way, as the latter does, with the caption ‘2001, London, England, 11 years before Homs’ is clearly not out to amuse.

The film is directed by Matthew Heineman, who has a reputation as a documentary-maker but has never made a feature film before. He does so with a screenplay inspired by a Vanity Fair article but written by Arash Amel, who wrote the screenplay for the execrable Grace Of Monaco. 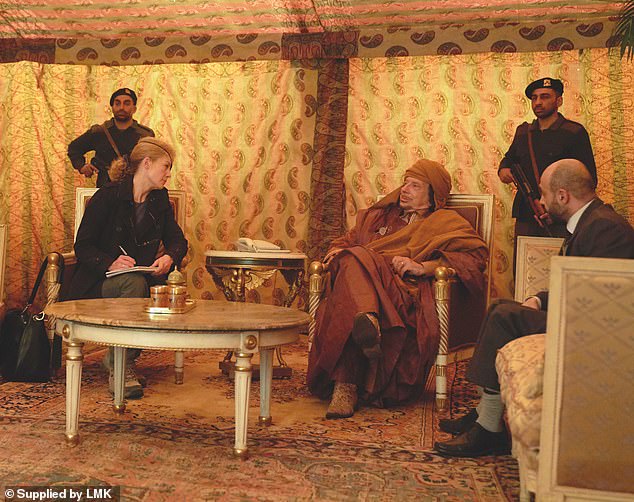 While it does a good job of capturing Colvin’s complex character, the film is full of clichés, and hampered by an overly-complicated structure. Above: Pike with Raad Rawi as Colonel Gaddafi

On paper, that’s not the most promising sounding combination but, in fairness to both, they do a pretty good job of capturing the complexities of Colvin’s character, telling her story and recreating the tragedy of her death. But they also serve up an awful lot of clichés, spring little in the way of surprises and at key moments get bogged down in a structure that has become too complicated for its own good.

There are moments when war-zone footage is battling for screen time with the fog of an alcoholic breakdown in London, interspersed with nightmarish visions that existed only in Colvin’s understandably wounded mind. It’s all just a little bit too much and damaging in the same way as the decision to have Colvin’s own reportage read – portentously and self-importantly – over more war-zone footage.

This is that strange thing – a serious film guilty of taking itself too seriously. The main casualty of this is the normally excellent Tom Hollander, who doesn’t do anything technically wrong as Colvin’s long-suffering London-based boss but equally doesn’t really convince as any sort of editor I’ve ever known. Newspaper journalism is funnier, crueller and more chaotic than this. 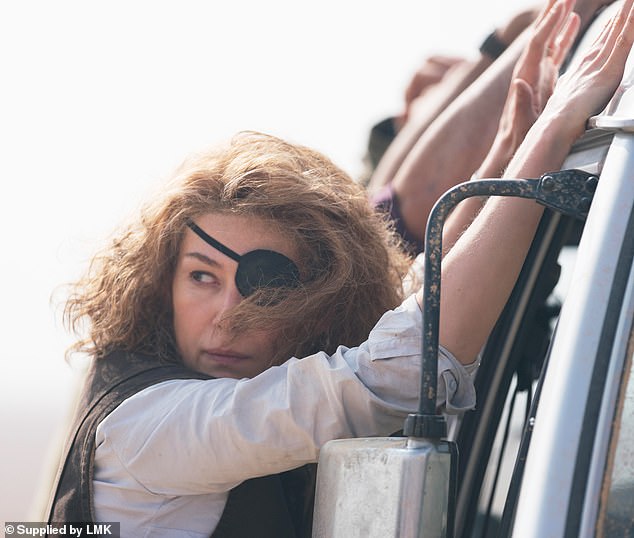 But as a portrait of a badly damaged woman who was out of control by the end, it succeeds. Colvin was 56 when she was killed; Pike has just turned 40. But she convinces throughout

Jamie Dornan, by contrast, is more plausible as Colvin’s photographer colleague, Paul Conroy, although whether this is because I don’t know many war photographers or because of his likable low-key performance is hard to say.

But it’s also a portrait of a badly damaged woman who had been traumatised by what she had seen, became addicted to war and who, by the awful end, had lost all sense of self-preservation and was out of control. Colvin was 56 when she was killed; Pike has just turned 40. But she convinces from beginning to end, and A Private War is worth seeing both for her and the extraordinary Colvin too, of course.

The Kid Who Would Be King (PG)

Joe Cornish – once of TV’s The Adam And Joe Show – has spent the past decade putting together an ever more impressive film career. With The Kid Who Would Be King, a modern take on the story of King Arthur, he both writes and directs.

And great fun it is too, helped by strong visual effects, some very funny moments and cracking performances by – Patrick Stewart and Rebecca Ferguson notwithstanding – its mainly youthful cast. 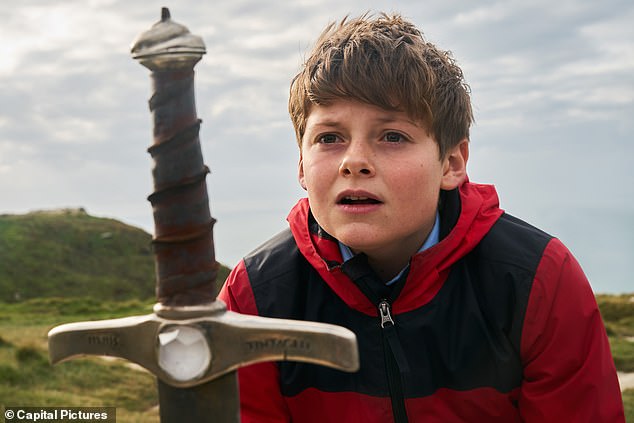 Move over Dad: Louis Ashborne Serkis (yes, son of Andy) shines in The Kid Who Would Be King, a likeable modern take on the story of King Arthur

The impressive Louis Ashbourne Serkis (yes, son of Andy) plays Alex, the brave but bullied schoolboy whose life is magically transformed when he pulls an unlikely looking sword out of a reinforced concrete pile. Suddenly he’s got a slightly camp Merlin as his spiritual guide and everyone’s off to Tintagel.

It starts off looking like telly but gets better in likeable leaps and bounds.

You can’t argue with the message – the world needs more generous-hearted people to foster and adopt children – but you can certainly question the execution. This is a film with the story, sentimentality and humour turned up to 11. 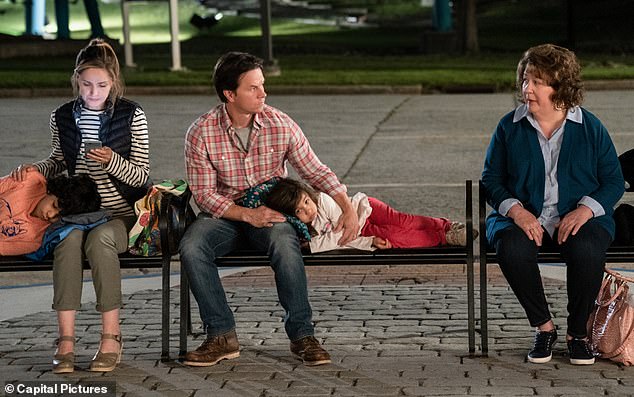 Mark Wahlberg and Rose Byrne (above, with Margo Martindale) are nice enough, but Instant Family is only modestly funny and relies heavily on tasteless gags

Mark Wahlberg and Rose Byrne are nice enough as the childless couple who decide to foster three siblings, including a preciously mature 15-year-old (Isabela Moner). But for every modestly funny moment there is something over-shrill or lacking in taste.

Not only does this sequel arrive barely 16 months after the original, it’s actually better. That, you may recall, was about Tree (Jessica Rothe), a student trapped in a Groundhog Day-style time loop that saw her waking up day after day knowing only that she would be murdered (again).

This only really gets going when the geek-gang tinkers with the space-time continuum again and suddenly poor Tree is back in the time-loop of the original. It’s funnier, cleverer and, for a while, even quite moving.

This is the unsettling story of a new father who leaves his wife and baby for a business trip. But his real aim is to engage in sado-masochistic sex with a prostitute and then to murder her.

But then Mia Wasikowska turns up and it seems the power games have only just begun. Nasty but stylishly executed.