The United State’s drug overdose crisis is only getting worse, and the Centers for Disease Control and Prevention (CDC) reported yet another grim record on Wednesday.

The agency revealed that an estimated 104,288 Americans died of a drug overdose between September 2020 to September 2021, the most ever recorded in a 12 month period. It was also the fourth straight month where a record for year-over-year drug overdose deaths was set.

It is also represents a 16 percent increase in overdose deaths within the past year.

A vast majority of these deaths are being caused by opioids, and mainly synthetic opioids like fentanyl that have torn through the U.S. in recent years.

The CDC reports that 78,388 deaths were caused by opioids, with 86 percent caused by synthetic versions of the drug.

America’s drug overdose was already spiraling out of control before the COVID-19 pandemic, but the disruptions to every day life, social isolation, and loss suffered by some Americans due to the virus has created the perfect storm to exacerbate the situation. 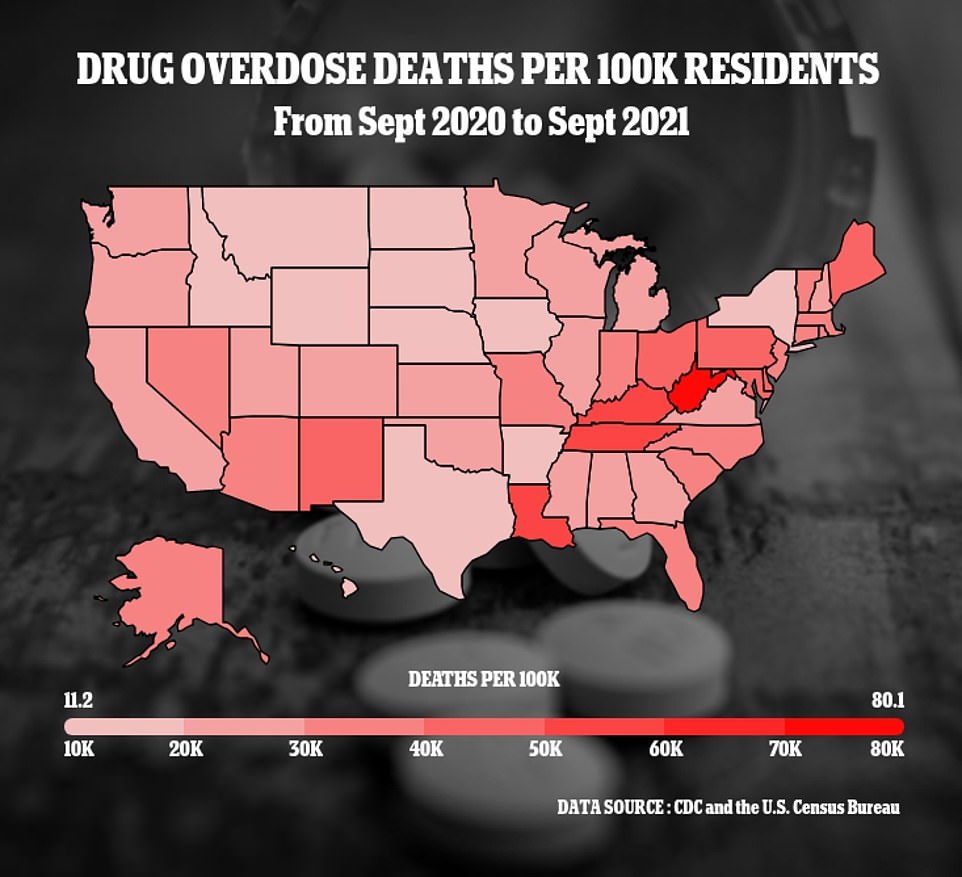 The report also revealed that the states in the Midwest and Appalachian regions of the country are dealing the brunt of America’s overdose problem.

West Virginia is still far and away suffering the biggest drug overdose issue in America, with 80.1 out of every 100,000 residents dying from an overdose during the time span included in the report.

Other states in the region like Tennessee, which recorded 54.6 deaths per 100,000 residents, and Kentucky, at 52.7 deaths, are among the leaders as well.

The Department of Health and Human Services has specifically targeted the Appalachian region as an area of concern during the nation’s opioid crisis, as rural areas in these states have been hard struck by the opioid crisis.

It is also harder for many of these people to receive treatment when they overdose, as they often live much further from hospitals and urgent care facilities than a person in an urban or suburban environment.

Combine these factors with growing poverty in the area, and now a pandemic that left millions out of work and isolated from their communities, and many people unfortunately allowed drug use to spiral out of control and cause their eventual death. 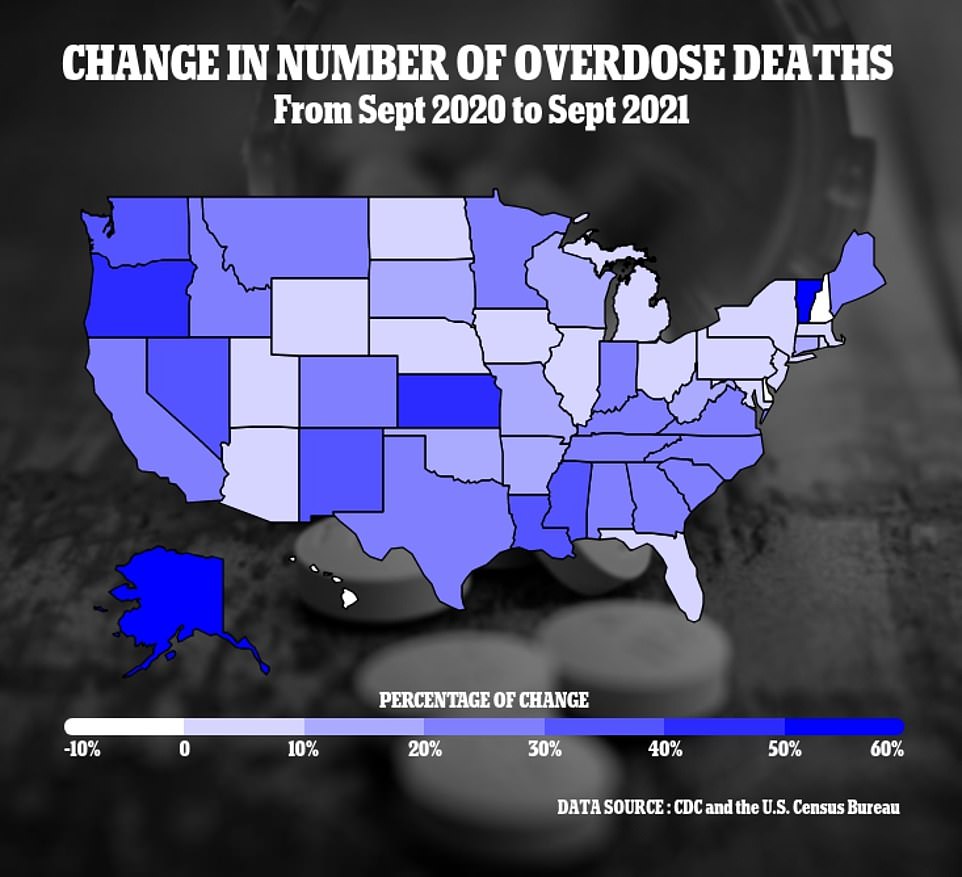 Some states have experienced worrying surges of overdose deaths over the past year as well.

Alaska logged a 60 percent jump in deaths from 2020 to 2021, the most of any state according to CDC data. Vermont was right behind with a 59.1 percent increase.

Nine states recorded increases of 30 percent or more, a massive surge over the course of only one year.

These increases during the pandemic are likely tied to the devastating social isolation caused by early lockdowns.

A survey by the Kaiser Family Foundation found that 41 percent of Americans reported having mental health issues in January 2021, a figure that dwarfs the 11 percent rate from before the pandemic.

The rise was especially noticeable among people that had recently lost a job due to Covid or made an annual salary of less that $40,000 per year. 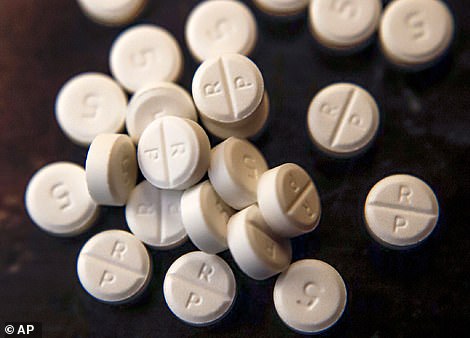 The drug overdose crisis in the U.S. has largely been fueled by opioids, which are highly addictive drugs often used as painkillers. Pictured: Percocet tablets, a popular opioid

Researchers at KFF also found a clear correlation between people reporting increased levels of depression and anxiety during Covid and their likelihood to abuse drugs.

Some states did record a decline in overdose deaths, though, a sign that things did not degrade everywhere in America over the past year.

The U.S. eclipsed the 100,000 annual overdose deaths total for the first time between April 2020 and 2021, a grave milestone for the nation after a full year of the pandemic.

‘As we continue to make strides to defeat the COVID-19 pandemic, we cannot overlook this epidemic of loss, which has touched families and communities across the country,’ President Joe Biden said when the data was revealed in November. 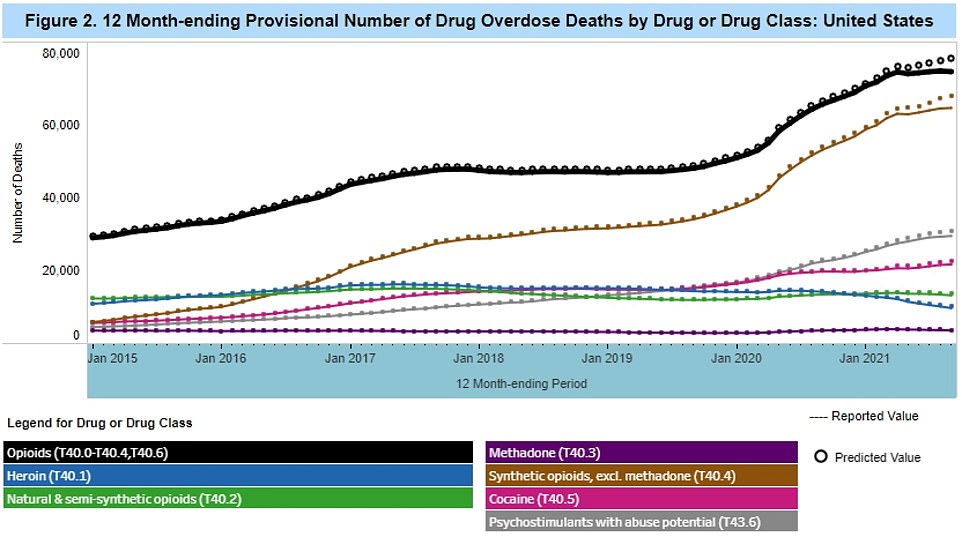 Opioids (black) make up nearly 80% of drug overdose deaths in the U.S., and synthetic opioids like fentanyl (brown) make up a large portion of overall opioid deaths

Since then, the 100,000 overdose death mark has been reached in every single report.

Opioids, and specifically synthetic opioids like fentanyl, are most at fault for the surging overdose deaths.

An estimated 78,388 deaths were caused by the drugs over the 12-month period, with 68,110 being attributed to synthetics like fentanyl. Semi-synthetic opioids were responsible for 13,734.

To combat this rise, the CDC issued guidelines six years ago limiting the amount of opioid pain-killer drugs could be distributed to patients by doctors.

The agency rolled back the rules last week, though, as it was determined that they were being misused and patients were being harmed by not receiving drugs needed for pain management.

The next leading cases were psychostimulants, causing  30,922 deaths, followed by 22,691 deaths from cocaine and just over 10,000 deaths caused by heroin.