Let’s be honest: you don’t come to New York for the hotels.

Ideally, you just need somewhere not too shabby to lay your head for a few hours between action-packed days blitzing the city’s attractions.

The Ace Hotels team acknowledges this in their latest creation -Sister City – which opened this Spring. 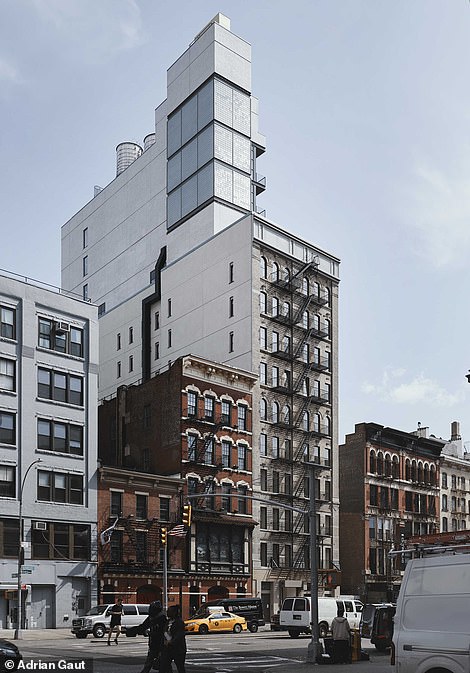 MailOnline Travel’s James Murphy checked into Sister City, which opened in Manhattan this Spring. Left, the hotel’s back garden gate and, right, an exterior shot of the building

They’ve stripped out everything you don’t really need in a hotel, leaving just the key ingredients, stylishly arrayed.

As the minimal website says, this is ‘a hotel distilled to its most beautiful parts… inspired by the functional perfection of Finnish saunas, Japanese bento boxes… and John Cage’s 4’33’ (which, if you don’t know, is a cult musical composition comprising no notes, just silence).

If that sounds a touch pretentious, the execution certainly isn’t.

A discrete gateway leads you into a shaded, plant-filled terrace.

Beyond this, the hotel foyer and adjacent restaurant – set to open this Summer – are fitted throughout in warmly inviting cherrywood.

The prevailing aesthetic in all the New York coffee shops right now seems to be potted ferns, and they’re rife here, bathed in sunlight pouring in from a rear garden, giving the premises a fresh, airy feeling. 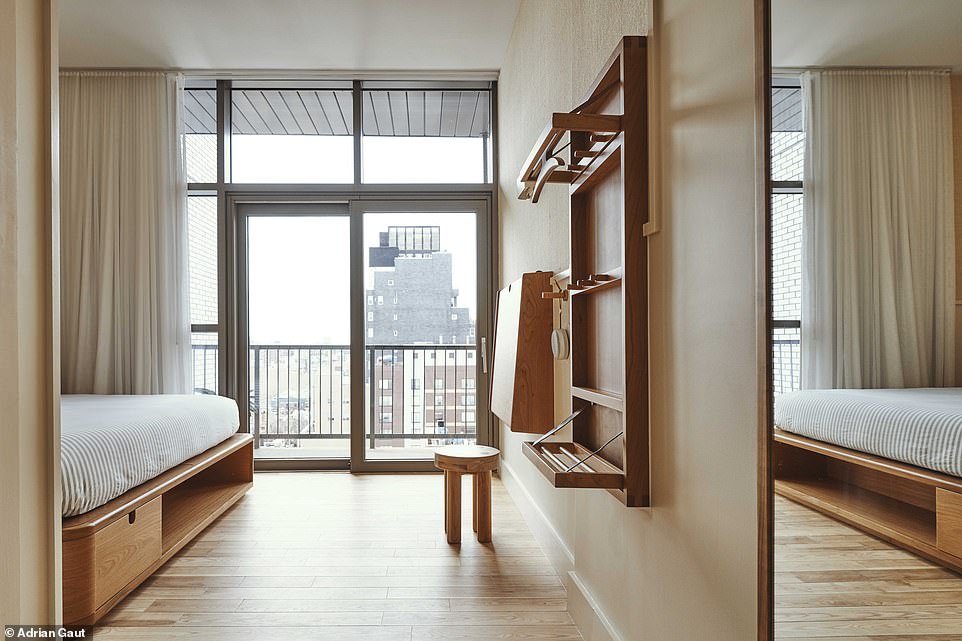 The bedstead, desk and valet-unit, from which you can hang multiple garments, have been finished in signature cherrywood

It couldn’t be more different from the sombre, soulless receptions of the older midtown hotels.

There is no welcome desk.

Instead, you check yourself in at a bank of iPads and assign yourself a key from a stack of plastic cards.

There’s a cheerful assistant on hand to help out but the process couldn’t be simpler.

The elevator is lined with corrugated metal, adding to the functional vibe, but it’s far more spacious and bright than the pokey, cramped lifts of most Manhattan hotels.

I ascend to the 13th floor, to a corner room with a king-sized bed and petite balcony overlooking the lower half of the island. 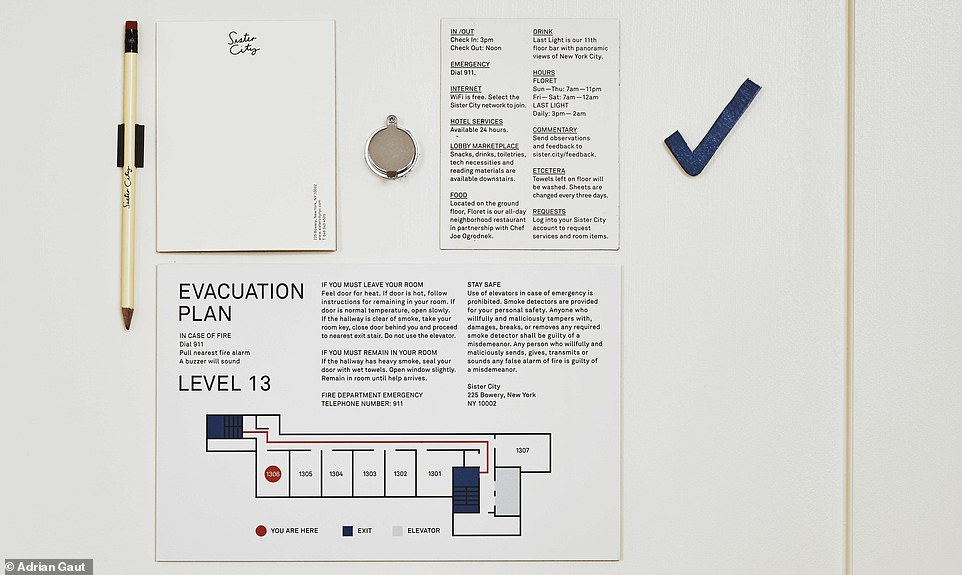 A quirky arrangement on the back of the hotel room door, with a jotter pad, directory and evacuation plan on display 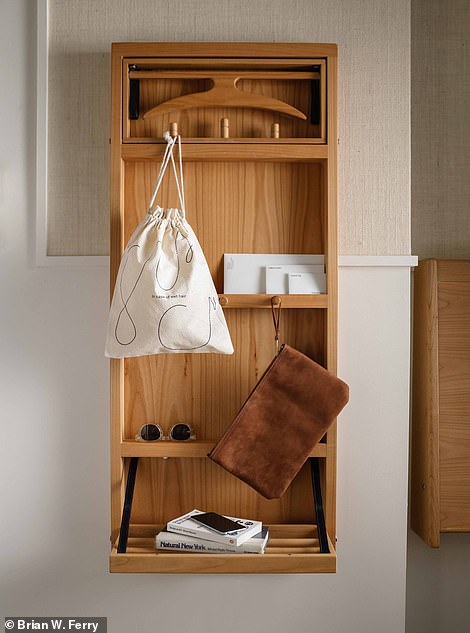 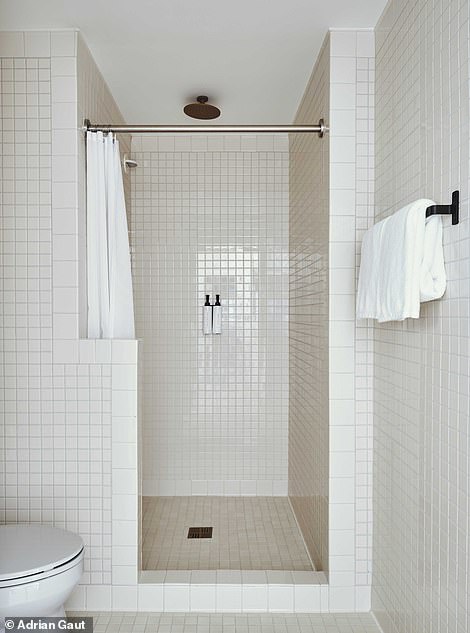 A valet unit where guests can store goods and hang clothes (left) and a peek inside one of the bathrooms (right). James said the copper rain-shower in his room blasted out ‘pleasingly hot water in an instant’ 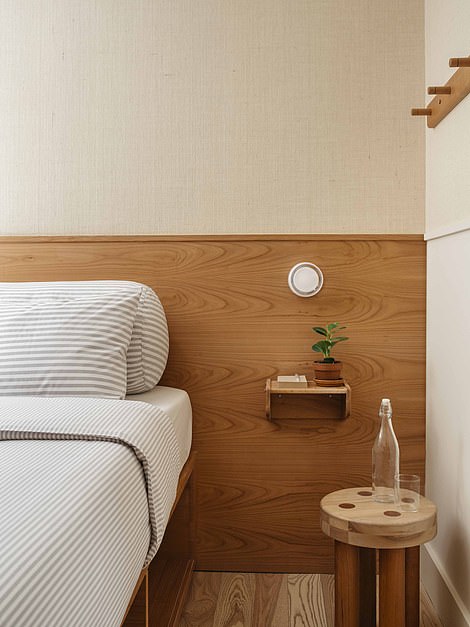 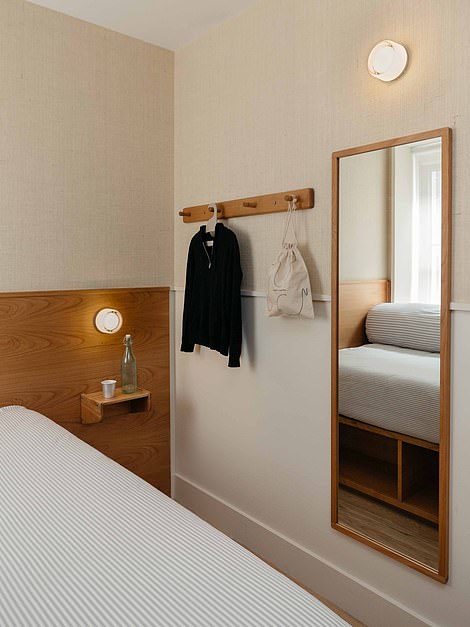 A view of the bedside area, with a small shelf for books (left) and hooks nearby to hang clothes on (right)

The bedstead, desk and valet-unit from which you can hang multiple garments are all in signature cherrywood.

Above the sink there’s a big circular mirror with a brightly lit rim that casts halos around your eyes as you peer in.

There’s an ample copper rain-shower that blasts out pleasingly hot water in an instant.

There’s also a chic Bang & Olufsen portable speaker you can hook up to your smartphone to play your own tunes.

But, as I say, you’re not really here to linger indoors.

Sister City is situated between two of New York’s most exciting neighbourhoods.

The back garden gate takes you into Freeman Alley, the home of the rustic, tavern-like Freemans: a favourite restaurant of many New Yorkers. 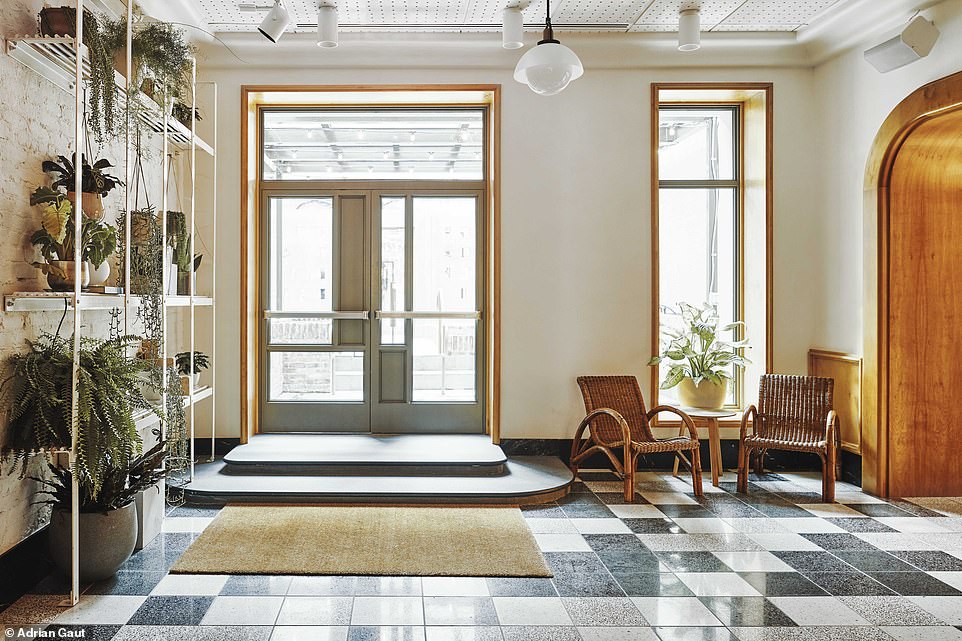 A shot of the hotel’s lobby area. James notes that ‘the prevailing aesthetic in all the New York coffee shops right now seems to be potted ferns, and they’re rife here, bathed in sunlight pouring in from a rear garden’ 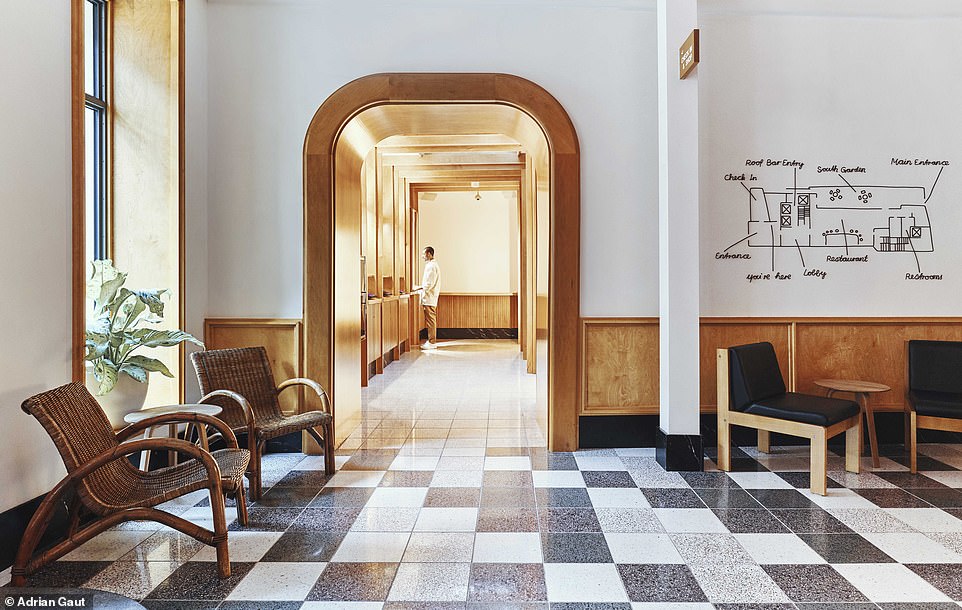 A corridor leading down to the self-service check-in area and a quirky map on the wall directing hotel guests to various amenities, including the roof bar, garden and restaurant 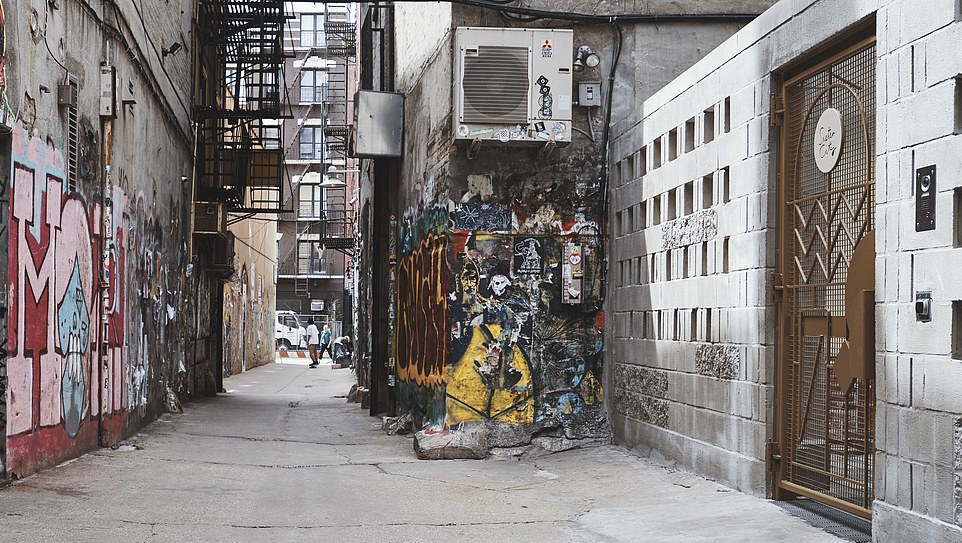 Sister City’s back garden gate takes you into Freeman Alley (pictured), the home of the rustic, tavern-like Freemans: a favourite restaurant of many New Yorkers

The alley leads you right into the Lower East Side, which over the past decade, has bloomed with boutique stores and charming little eateries and bars that really buzz at night.

Back out the front, you’re bang opposite Prince Street, one of the most characterful arteries of Soho where tourists queue blocks for the city’s best pizza and chocolate cake.

On summery weekends, traders fill Prince Street with all sorts of art.

There are countless cool clothes shops and one of New York’s finest bookstores, McNally Jackson.

When you’re all shopped out, the hotel has just the tonic: the understated but remarkable rooftop bar, Last Light.

New York ought to excel at rooftop bars but they almost all feel designed with tourists in mind, and are duly overcrowded and overpriced. Last Light is different. 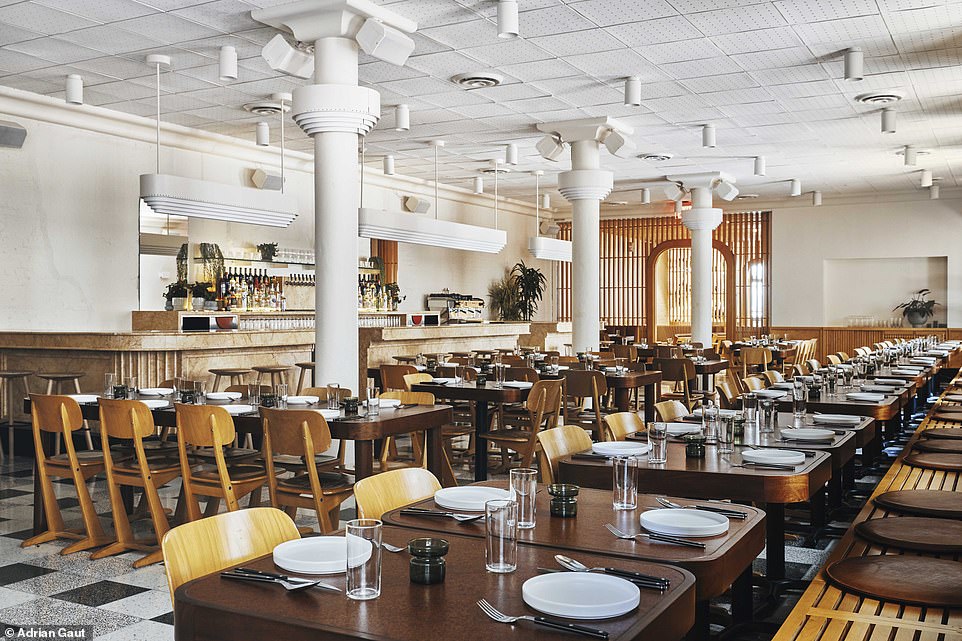 Floret is an all-day neighborhood restaurant and bar located on the hotel’s ground floor. Last ‘light food’ service is 2am 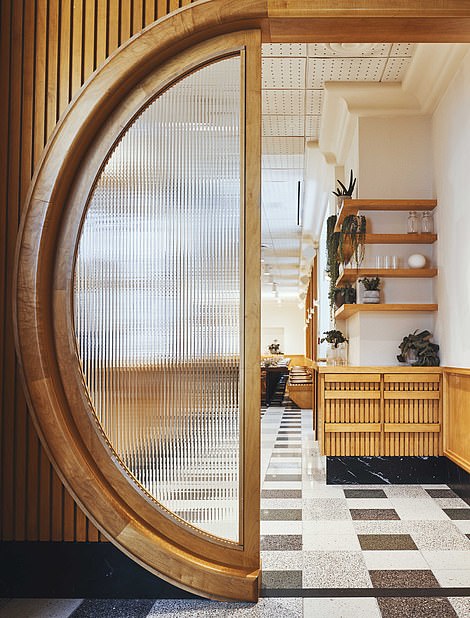 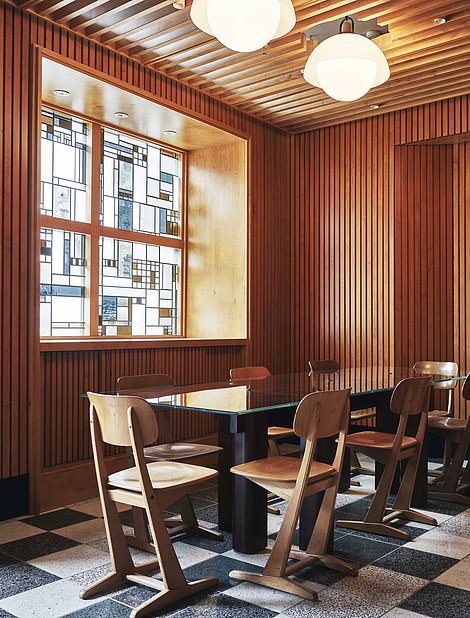 The restaurant has a circular shaped door (left), and spaces for more intimate dining experiences (right) 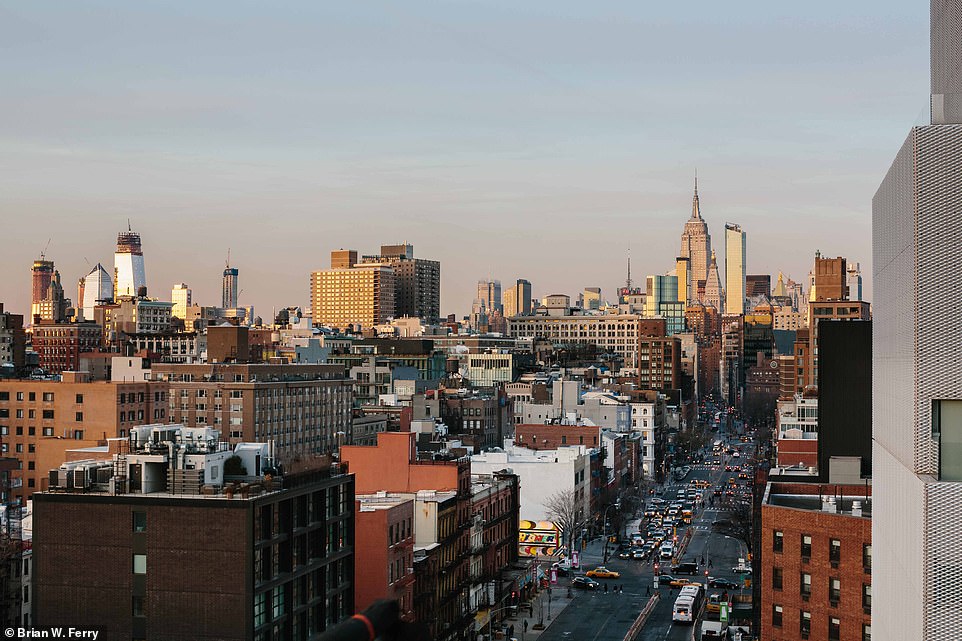 When you’re all shopped out, James says the New York hotel has’ just the tonic’, with an ‘understated but remarkable rooftop bar’ offering great views of the bustling city

There’s a broad west-facing terrace that – true to the bar’s title – soaks up the sun’s glow till the last possible moment, then the illuminated downtown towers keep things bright till closing time at 2am.

The cocktail menu, conjured by bar manager Krisitine Danks, is bursting with invention: it’s clear her friendly staff enjoy mixing its fresh compounds and the place is abuzz with trendy young New Yorkers who’ve come especially to sample such prospects as the Hemingway Daiquiri or the Mezcal Negroni.

I particularly recommend the cool fizz of the Chandelier followed by the tangy blast of the Firecracker.

While the restaurant downstairs isn’t yet open, residents can enjoy a continental breakfast buffet there for $15.

Ambient, meditative music – the kind you hear when you get a massage – softly fills the space.

In a metropolis of every excess, Sister City is a real haven.

For now a quirky individual, it may yet become the blueprint for all New York hotels.

For more information and to book a room visit sistercitynyc.com.