A review of The Jaffa Hotel, Tel Aviv, which has Damien Hirst art in the lobby

Walk the corridors of The Jaffa hotel and it’s easy to imagine that once upon a time it would have been filled with hospital staff wheeling patients to the operating theatre.

Not least because the signs to the surgical wing and infirmary are still marked above the doors of what was one of Tel Aviv’s hottest hotel openings of last year.

The hotel was originally due to open in 2015 but the major renovation of this former 19th-century French hospital and convent took much longer than anticipated in order to get everything just right. 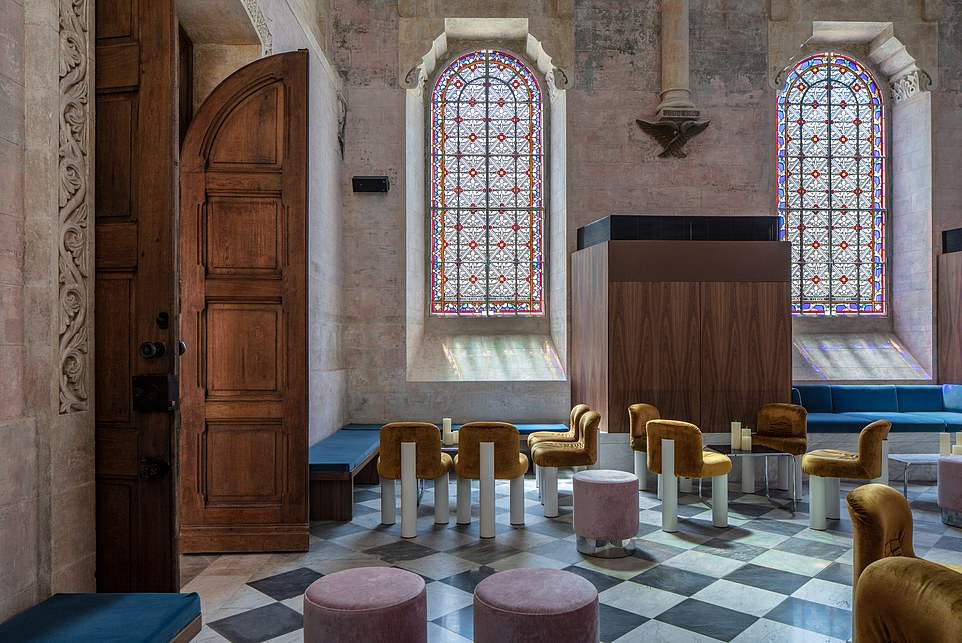 The Chapel Bar is located in the convent’s former place of worship. It is open to guests and the public from 4pm until late

The Jaffa was a personal project for Rosen and he has left his mark with Damien Hirst artwork from his collection displayed in the swanky lobby. 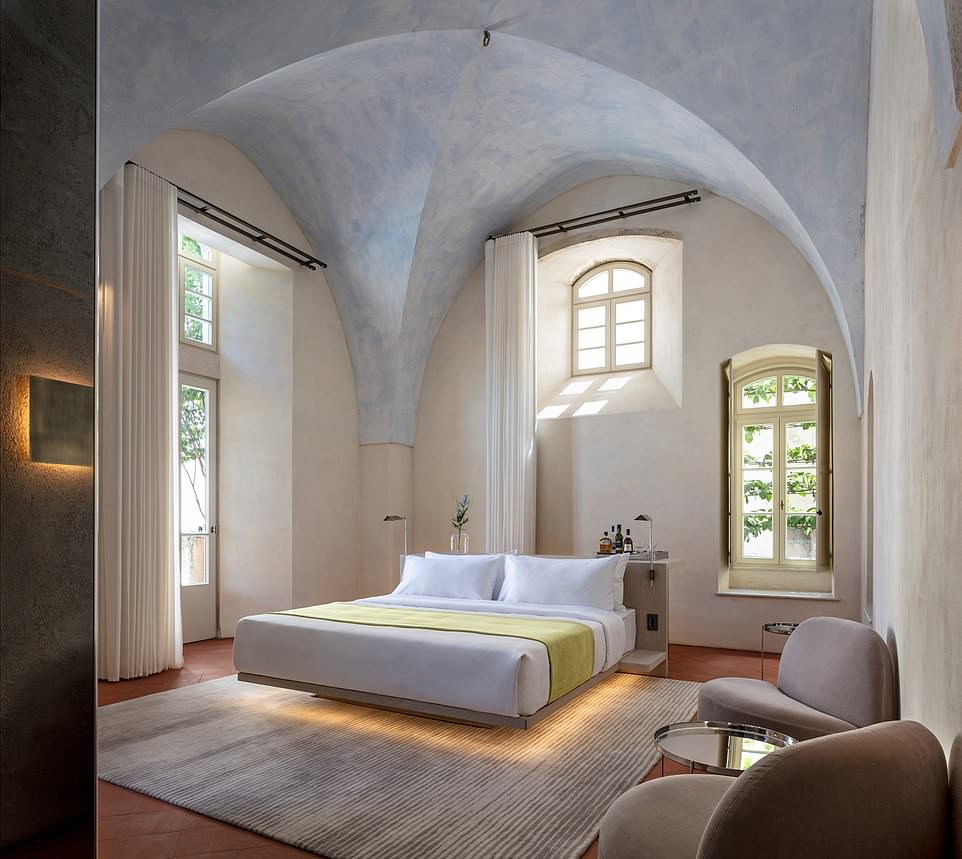 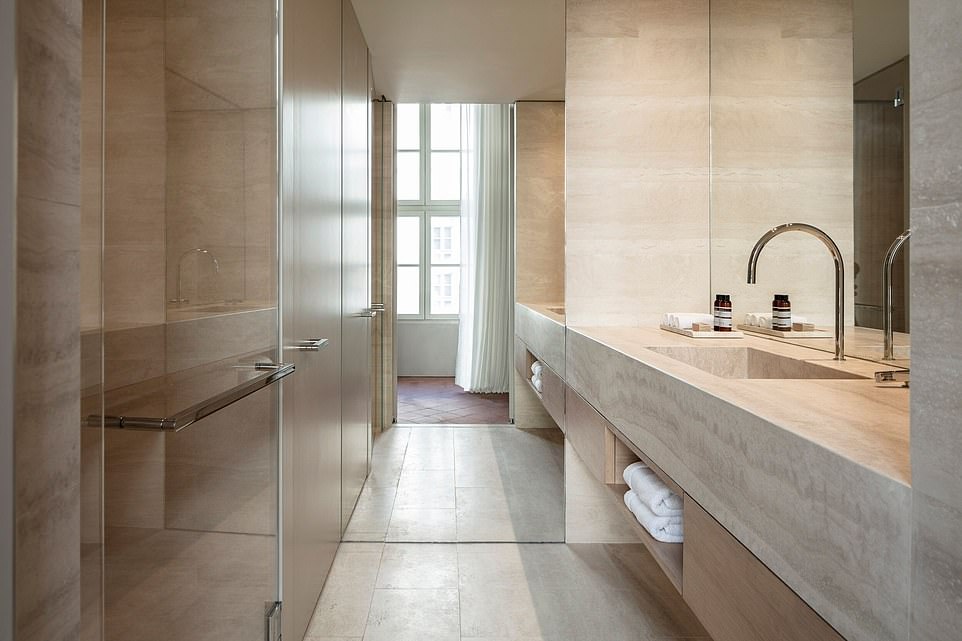 No doubt he also had a hand in the American inspired deli-style restaurant that serves Big Apple classics such as bagels with lox and cream cheese.

The hotel is located in the heart of Jaffa’s buzzing old city famous for its flea market, art galleries and ancient sights.

Despite its less-than serene surroundings (Jaffa is quite the tourist trap) once inside the thickly walled property it is an oasis of calm. 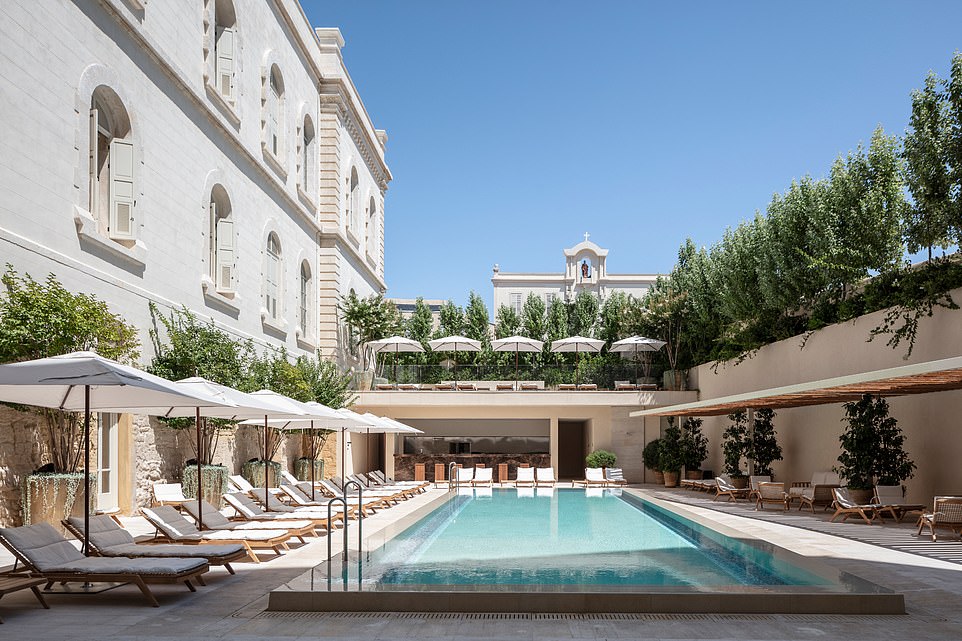 ‘Hang poolside with a cold drink, enjoy lunch in the open-air courtyard and then when night falls head to the one-of-a-kind bar,’ writes Samantha 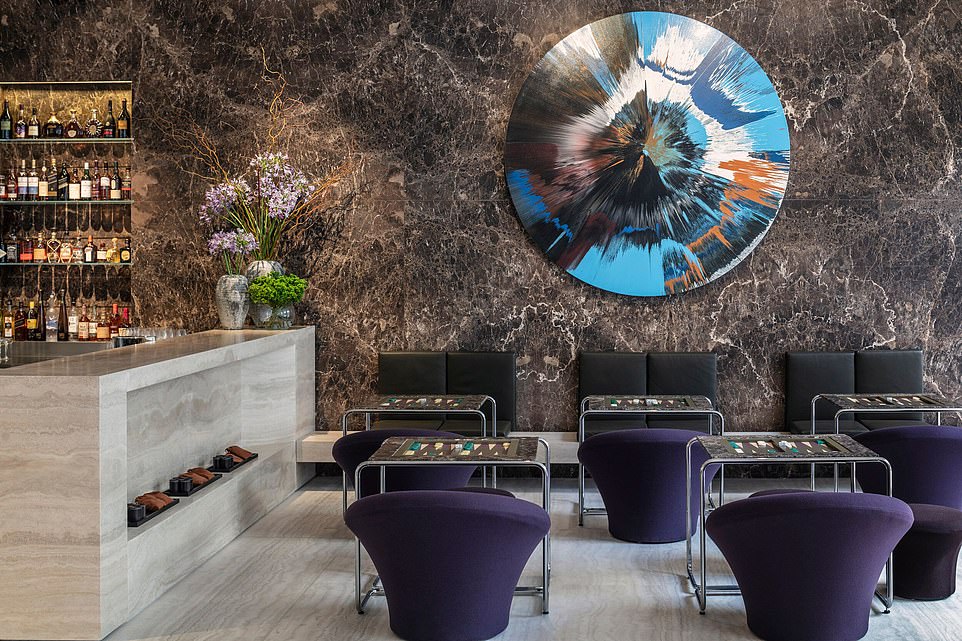 In a spin: Damien Hirst artwork from the owner’s personal collection hangs in the swanky lobby 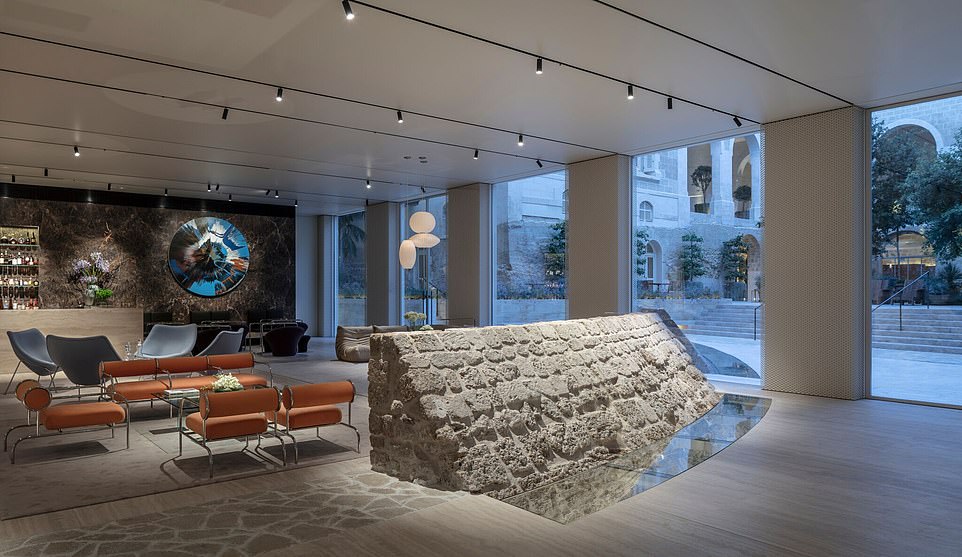 Rich in history: Remnants of a 13th-century Crusaders’ bastion wall, pictured above, can be found in the hotel lobby

I stayed in the historic part of the hotel where there are 40 minimalist bedrooms (there are 80 others in a newly built wing). The rooms are huge with high vaulted ceilings, king-size beds and dramatic floor-to-ceiling curtains.

They are also seriously high-tech with a control panel that operates the lights, air conditioning, and opens and closes the curtains. And the mirror box, which disguises the bathroom and has a built-in TV, is simply inspired.

Elsewhere, guests can hang poolside with a cold drink, enjoy lunch in the open-air courtyard and then when night falls head to the one-of-a-kind bar. 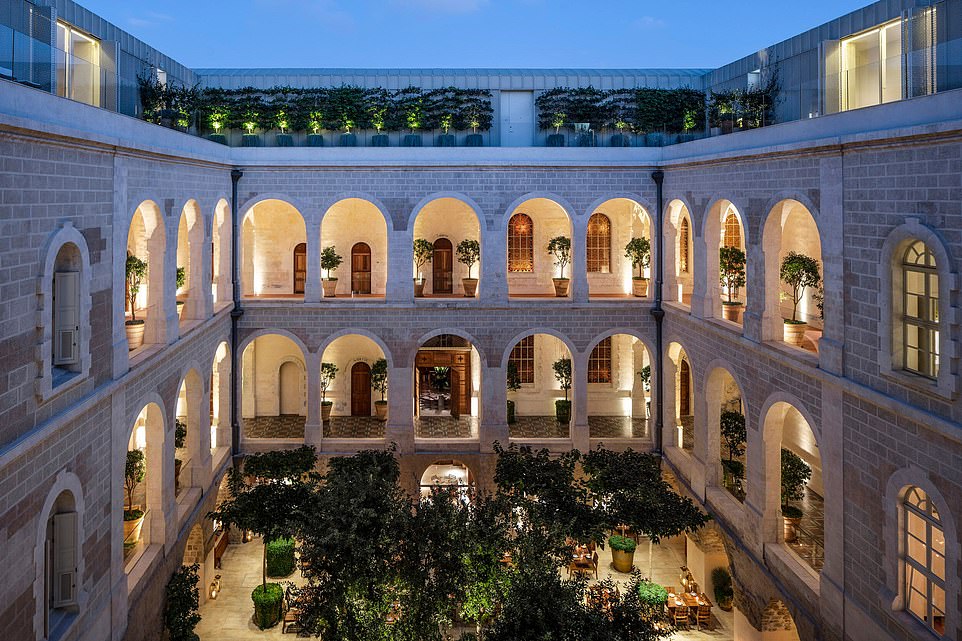 Samantha describes The Jaffa, ‘much like a visit to this wildly underrated city’ as ‘a unique and unforgettable experience’ 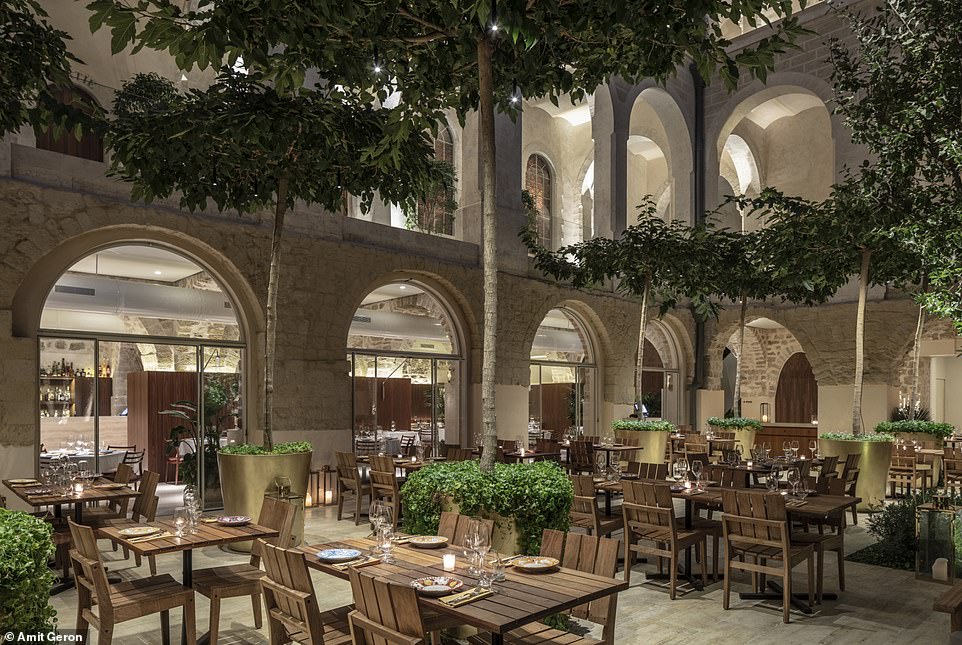 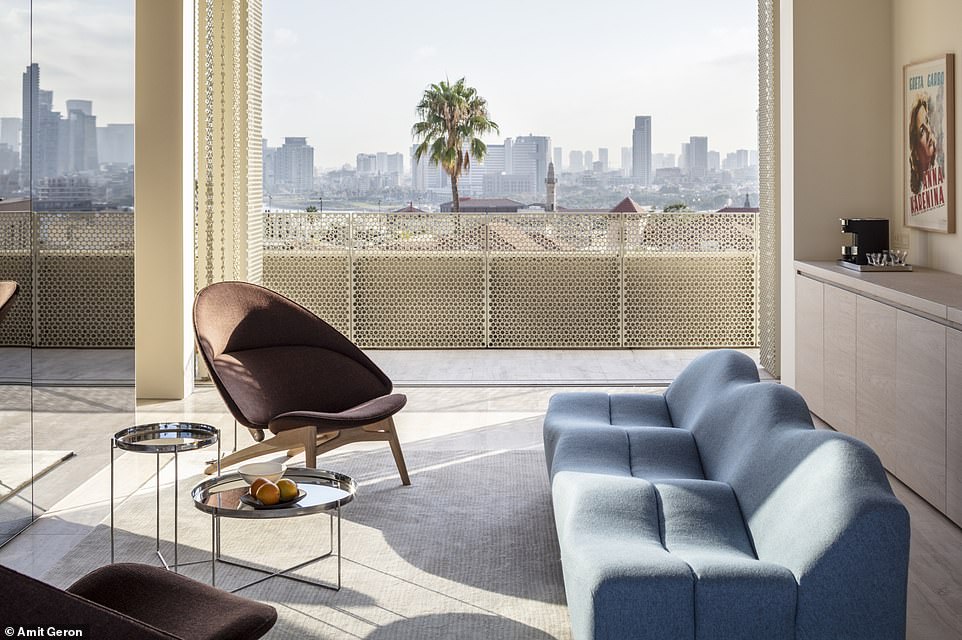 The plush Royal Suite living room, with the heat-haze smothered city beyond 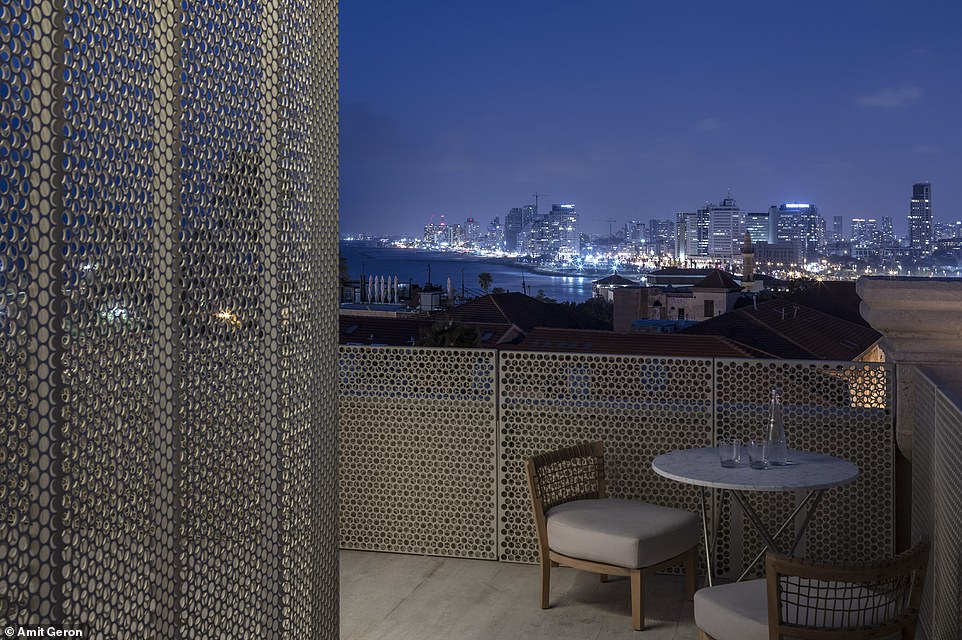 The Presidential Suite, from which guests can gaze upon the Tel Aviv waterfront 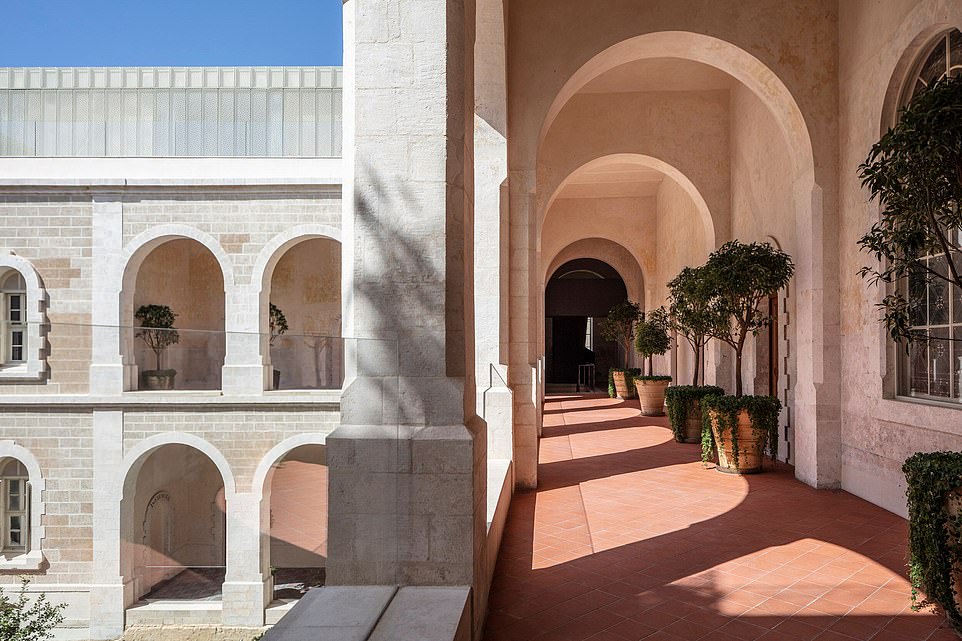 Modern meets medieval: The Jaffa was originally due to open in 2015 but the major renovation of this former 19th-century French hospital and convent took much longer than anticipated 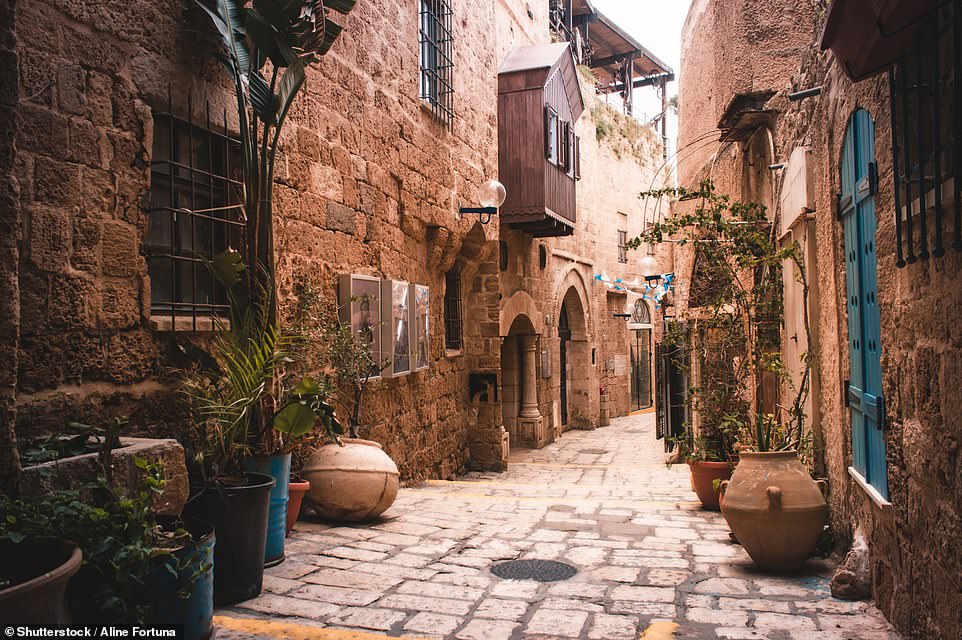 The hotel is located in the heart of Jaffa’s buzzing old city, pictured, famous for its flea market, art galleries and ancient sights 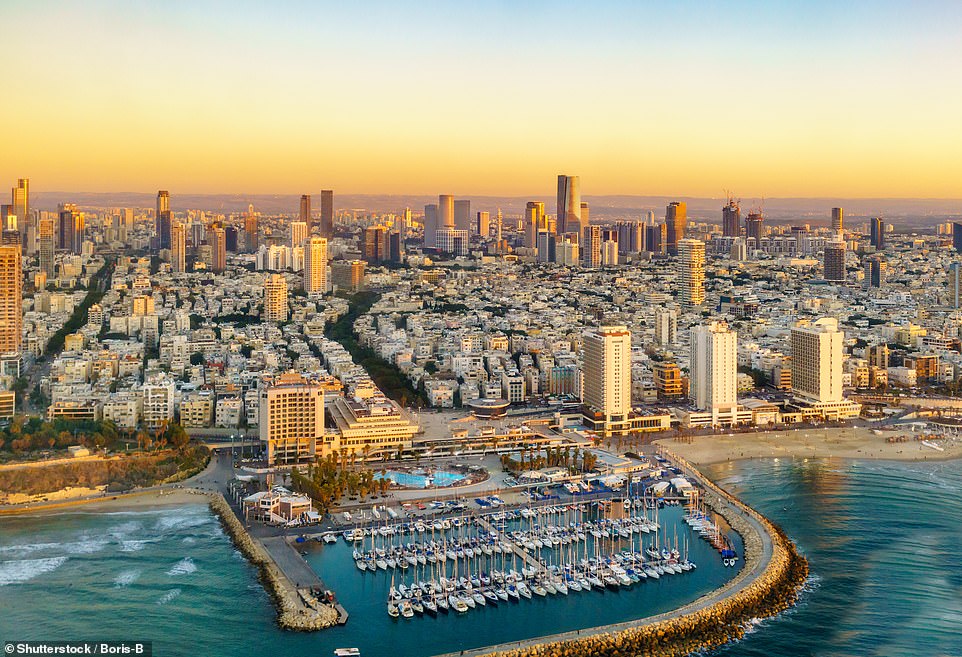 Aptly called the Chapel Bar due to its location in the convent’s former place of worship, it has become one of the area’s chicest cocktails bars and is open from 4pm until late. The decor is heavenly with blush coloured walls and velvet upholstered pews.

It’s no secret that Tel Avivians know how to enjoy life and this is certainly somewhere to indulge in full-throttle luxury.

The Jaffa, much like a visit to this wildly underrated city, is a unique and unforgettable experience. My one gripe? The shakshuka (an Israeli special) at breakfast was disappointingly sub-par.

EasyJet flies to Tel Aviv from London Gatwick, London Luton, London Stansted and Manchester with prices starting from £46.50 per person (one way, including taxes and based on two people on the same booking). For more information visit www.easyjet.com.