Holiness is perhaps an under-rated quality in a hotel. What with the worldly trappings of room service, valet parking and chocolates on pillows – not to mention the Satanic temptation of mini-bars – they are normally unabashed temples of fleshly delights.

The Mamilla Hotel in Jerusalem, however, is different. Don’t get me wrong: as a cornucopia of indulgence, with a spa, pool, sundeck, exquisite restaurants and winery, it is hardly a sackcloth-and-ashes sort of dive.

But the Mamilla is just a stone’s throw from the Old City. Step out of the expansive, air-conditioned foyer into the bright sunshine, nod to the attentive doormen, wander for five minutes through ancient, butter-coloured stone walkways, and you will find yourself standing at what millions believe is the holiest site on earth. 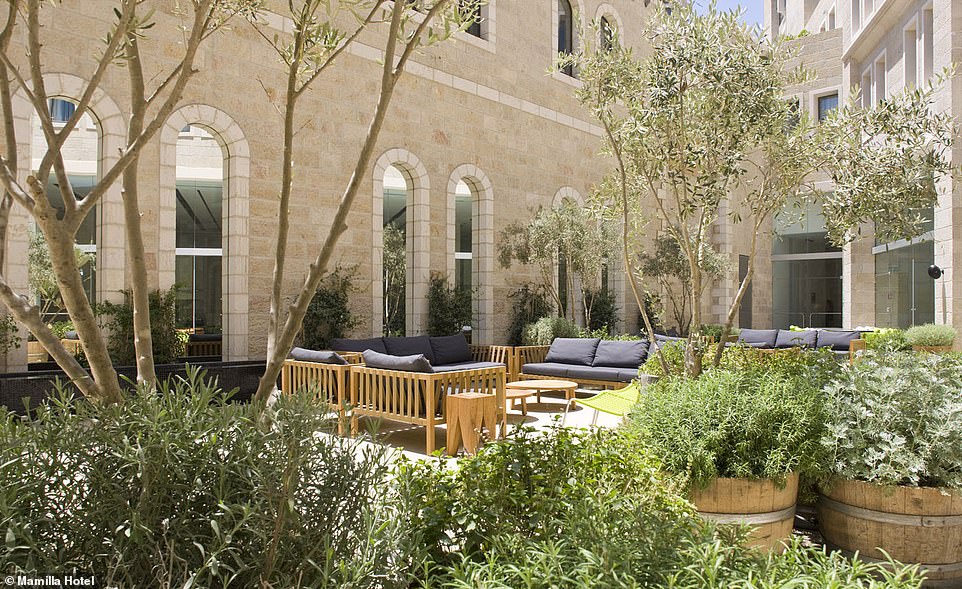 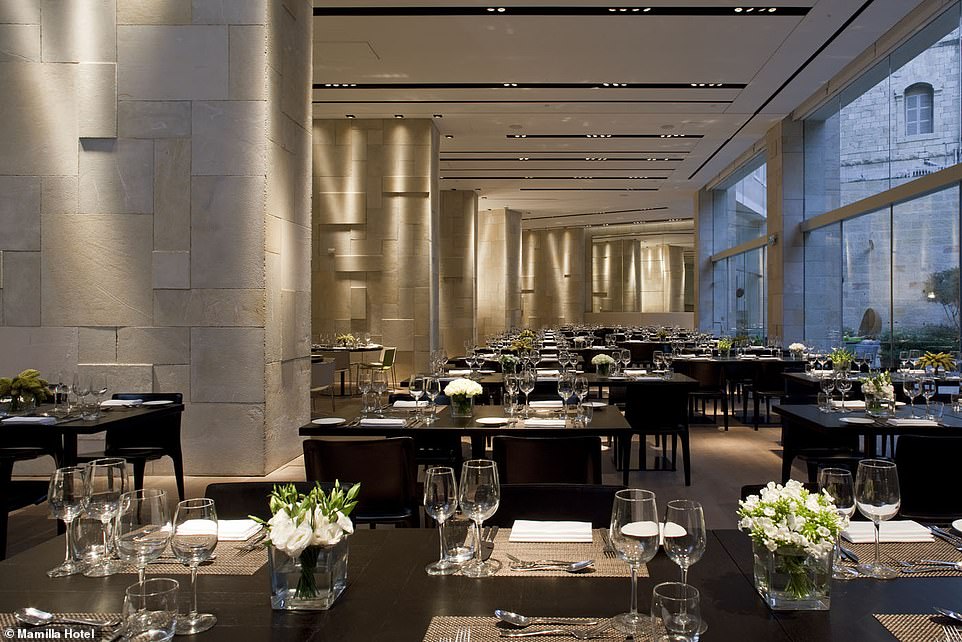 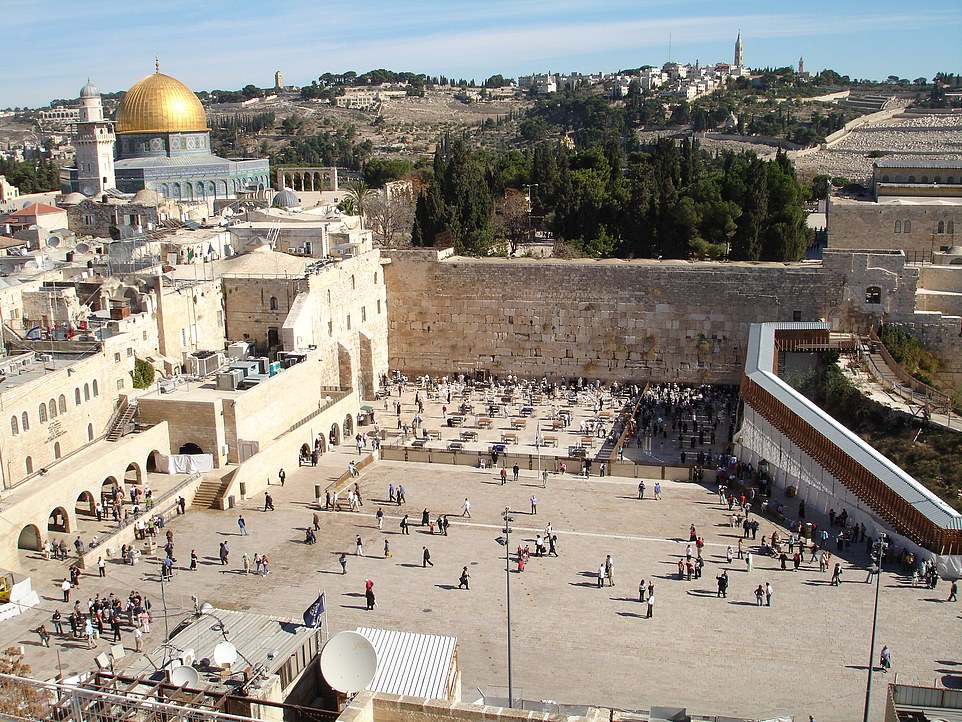 The Western Wall plaza, just a short walk from the hotel, is the holiest site for Jews 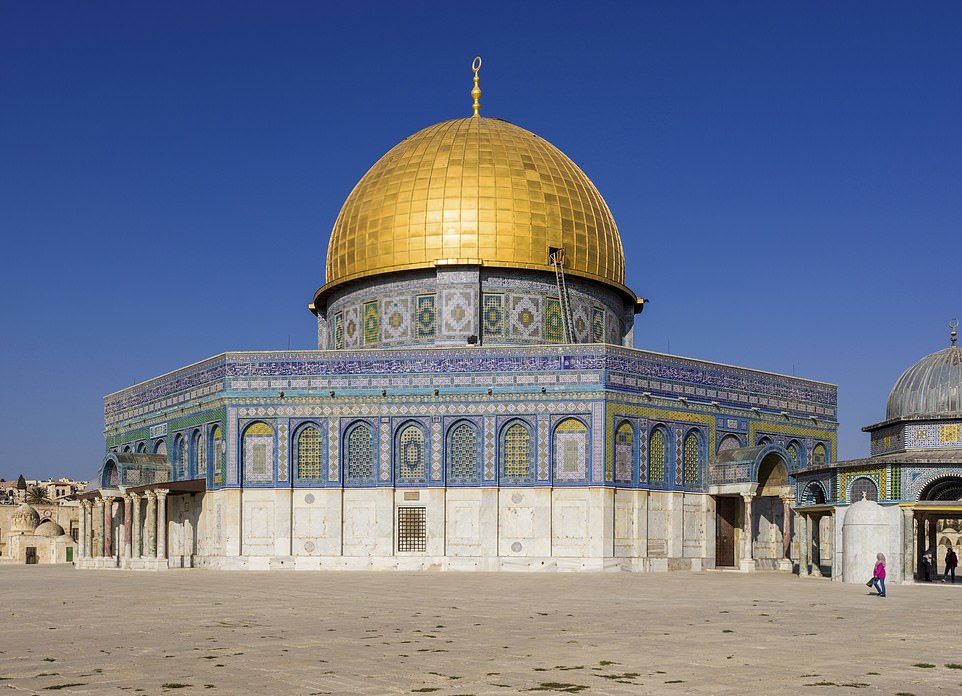 The magnificent Dome Of The Rock is well worth a visit, though non-Muslims are barred entry 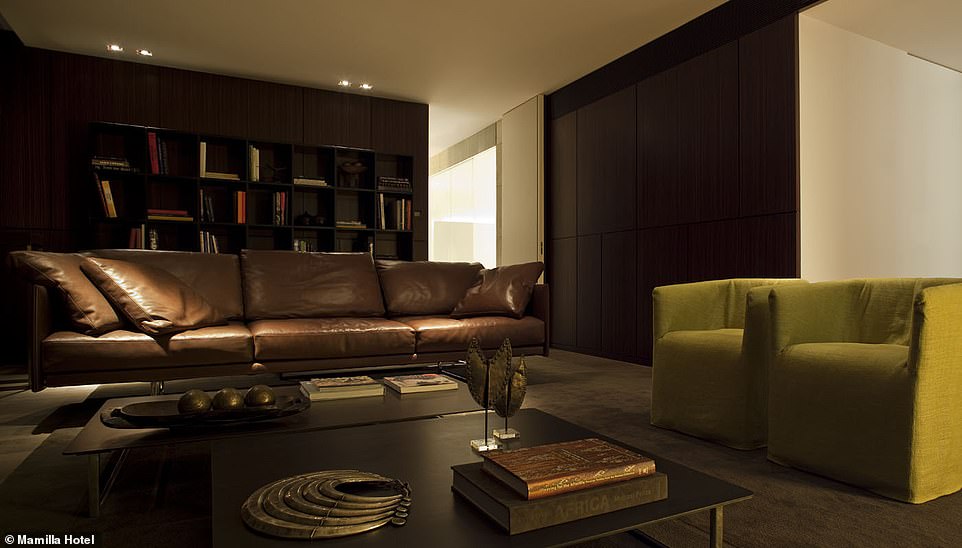 One of the comfortable lounges at the Mamilla Hotel, where you can unwind in the coolness

Ladies and gentlemen, I give you the Western Wall, the hotel seems to say (you can see the Old City from the roof terrace). As the last remaining wall of the Second Temple, this is the most sacred location where Jews are currently permitted to pray.

The Dome of the Rock, just behind the wall, is the third-holiest place for Muslims, on account of Mohammad using it as a starting point for his ascent to heaven.

The Old City is also home to the cavernous Church of the Holy Sepulchre, which is said to lie on the site of Jesus’ crucifixion and to contain the tomb from which he resurrected.

A day’s sightseeing is easily swallowed up in the ancient alleyways. Tourists can visit the Western Wall and Dome of the Rock compound most days, but check that there aren’t any demonstrations or festivals going on.

You thread your way through the narrow alleyways of the Muslim Quarter, climb and descend several flights of stone steps, and emerge from the maze into the blinding sunlight of the Western Wall Plaza.

Women should avoid showing too much skin. Skullcaps are provided for men who have not come prepared, and you are free to wander in and out of impromptu prayer sessions or simply sit with your thoughts.

There is a tradition of slipping personal prayers on paper into the cracks in the wall. Many people take notes from friends and family back home to deliver on their behalf. 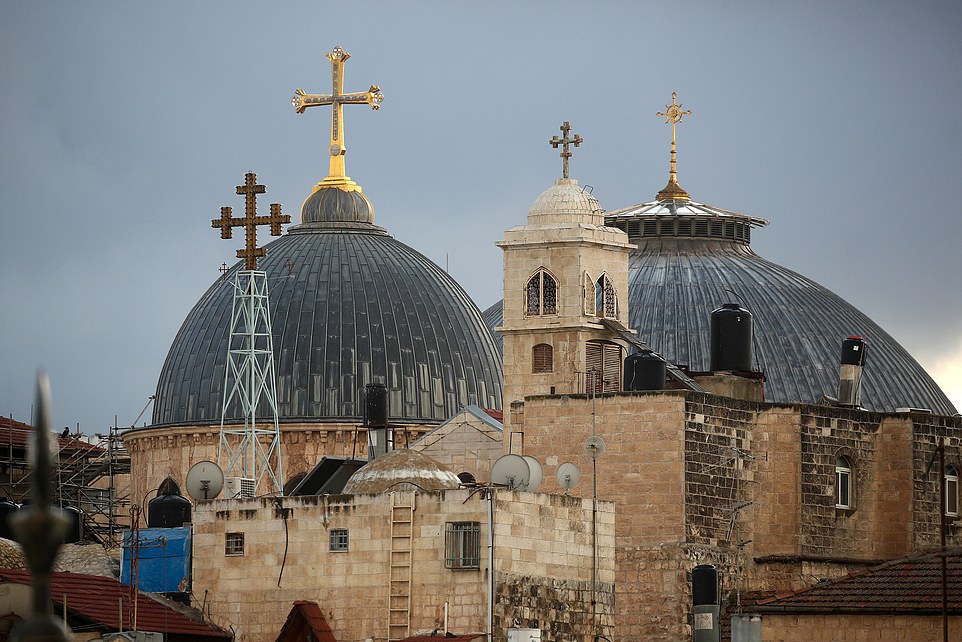 The Church Of The Holy Sepulchre, one of Christianity’s holiest sites, is nearby 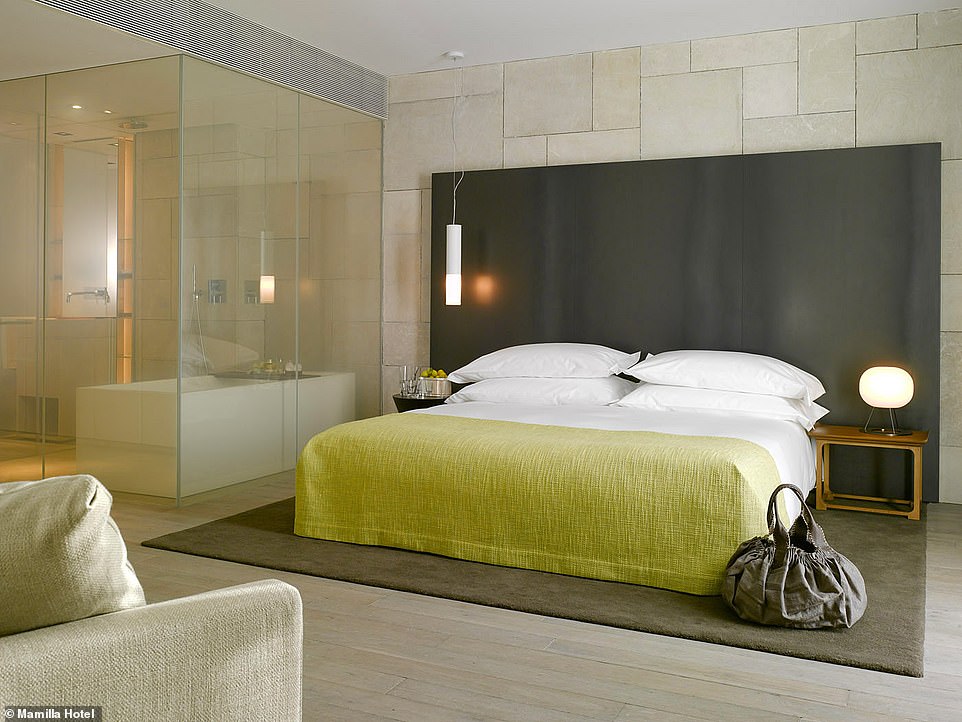 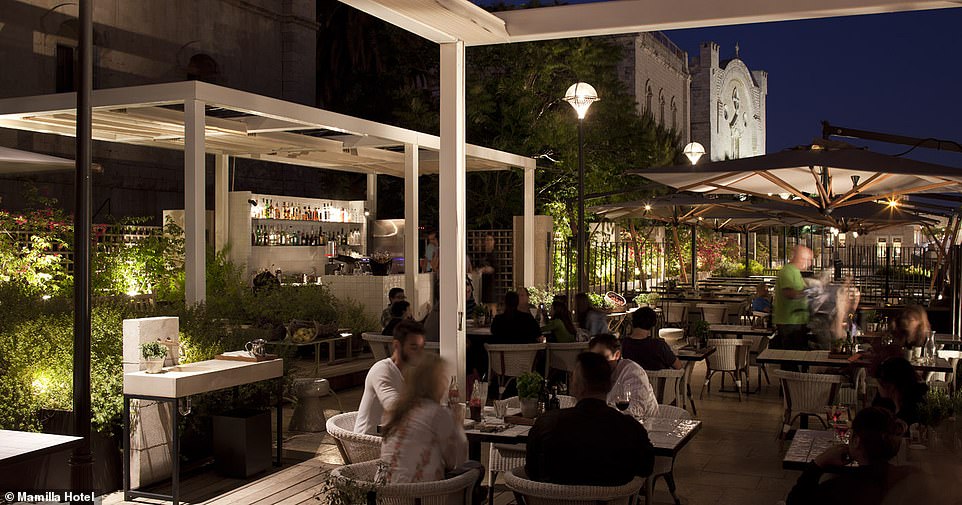 The hotel’s terrace, which serves excellent food in the open air, late into the night 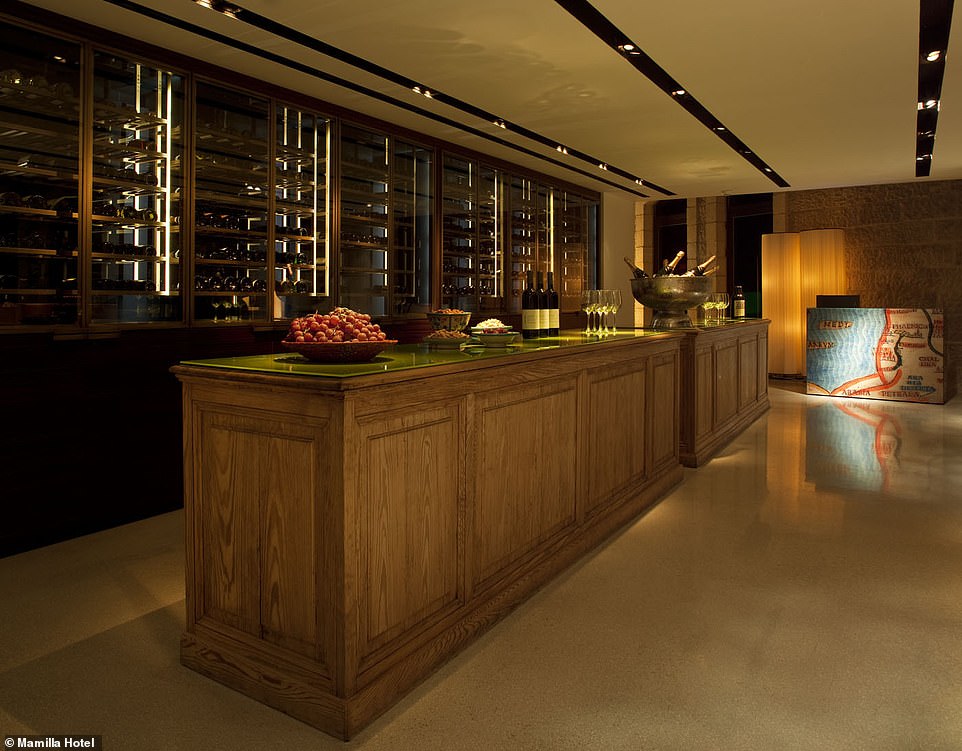 The hotel even boasts an excellent winery, where tastings are regularly held for guests

A handful of beggars can always be found around the Western Wall – or rather, they can always find you.

There’s no telling how genuine they are, but make your decision early: either give them some small change or wave them away early. Oscillation and equivocation make things worse.

The Dome of the Rock compound, with its unique golden cap that dominates the Jerusalem skyline, can be accessed via a wooden walkway. One of the world’s oldest examples of Islamic architecture, it was built around a stone believed to be where Abraham tried to sacrifice his son, Isaac. 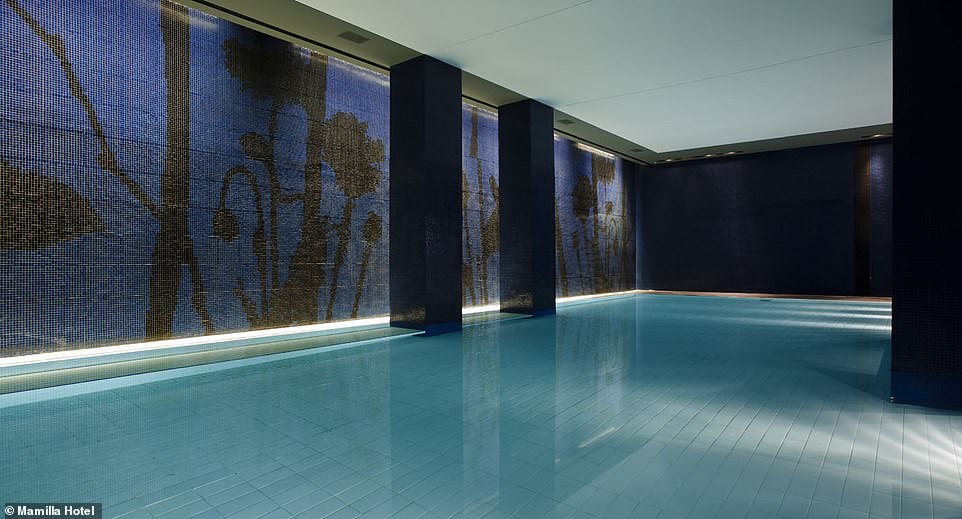 Both breathtaking and iconic, it is well worth a visit – though non-Muslims are not allowed to pray or make any ‘religious displays’ in the compound, and are barred from the Dome building itself.

In addition to the extraordinary Church of the Holy Sepulchre, nearby Christian sites include the Via Dolorosa, where the 14 Stations of the Cross are marked. Where monotheism is concerned, you could not get any holier.

But the Old City, with its teeming devotees of different traditions and faiths, makes for an intense visit, particularly during the spring and summer months when the sun can be fierce.

It also demands much walking, as vehicles have very limited access inside.

What a relief, therefore, to leave one of the ancient arched gates and arrive – after just five minutes’ amble – in the cool embrace of Mamilla.

Many of the hotel’s rooms boast spectacular views of the Old City, as does the lovely rooftop restaurant. Breakfast, in the vast lower floor dining area, is extensive and spectacular, offering Israeli shakshuka, cheeses and vegetables alongside European treats.

On the roof, where shade is afforded by carefully-placed hanging parasols, the food is gourmet with a precise attention to detail. Hot food is not served on Saturdays, the Jewish sabbath, but given the climate, the menu of sushi and salad is very welcome.

The spa is extensive and ideal for relaxing after a hard day’s sightseeing, and the winery and bars offer perfect backdrops for evenings of indulgence.

This is an outpost of temporal indulgence in a haven of spirituality. For those of us who are more epicurean than renunciate, could there be a better way to visit God?

Rooms at the Mamilla Hotel start at $390 for double occupancy, including breakfast. Visit mamillahotel.com for more details.