A score to your door: Uber Eats starts delivering MARIJUANA for first time ever from today

A score to your door: Uber Eats starts delivering MARIJUANA for first time ever from today

Uber Eats today started delivering marijuana for the first time ever — and will launch the service in Canada.

Residents in Toronto are now able to access a marijuana menu from the app thanks to an exclusive deal with the online cannabis marketplace Leafly.

They will need to prove they are sober and at least 19 years of age when the driver shows up at their door.

The menu will include a host of cannabis products, including chocolates and candies laced with THC – the psychoactive compound in marijuana – as well as vape cartridges.

The delivery service said it was offering a ‘safe, convenient’ way to get marijuana that cuts out the black market.

Ontario residents have been allowed to order cannabis products via UberEats since November, but the law required customers to pick up their purchases.

But a growing body of research warns repeated use of the drug can alter brain development in young adults, and even raise the risk of depression or problems in relationships and careers.

Uber Eats told DailyMail.com there were no plans to break into the US market, where the recreational use of cannabis has been legalized in 19 states.

Uber Eats says they are offering a ‘safe, convenient’ way for people to get cannabis in Toronto, Canada 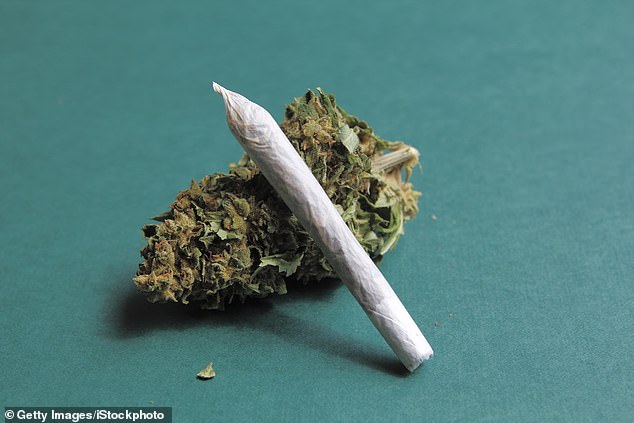 The above shows cannabis use across American states. Some 19 have legalized it for recreational use, while nearly all now allow it to be used for medicinal purposes

What are the health risks of marijuana?

About 48million Americans smoke cannabis at least once a year, official estimates suggest.

This figure is rising as states continue to legalize the drug.

But evidence is also growing over its health risks, particularly for young adults.

Researchers suggest it has the following negative impacts:

More than 48.2million Americans try marijuana annually — or 18 per cent of the population, official estimates suggest.

This figure has risen in young adults as a total of 19 states have now legalized it for recreational use.

Marijuana can be smoked or eaten via a tablet or edible laced with THC.

It works by stimulating the release of dopamine — the brain’s reward chemical — sparking feelings of pleasure, satisfaction and achievement.

Chronic use of the drug has been associated with altered brain development, leading to a lower IQ.

The drug has also been linked depression and other mental health problems.

Under the new Uber Eats scheme, cannabis products will be delivered by shops where they were purchased from, rather than Uber Eats employees.

All customers will be asked for ID to ensure they are over 19 years old — the minimum age for weed purchases in Canada — and are sober.

It marks the first time a ‘third-party’ has been able to sell cannabis products in Canada. Previously, authorities in Ontario — where Toronto is based — had allowed delivery but only when it was ordered directly from the seller.

Uber Eats has partnered with Leafly, a leading online cannabis seller, to make the products available on its website.

Shops that will now be selling on Uber Eats include Hidden Leaf Cannabis, Minerva Cannabis and Shivaa’s Rose.

Lola Kassim, the general manager of Uber Eats Canada, said the move would provide a ‘safe, convenient’ option for customers that circumvents the black market.

She added: ‘Over the last few years, we have invested heavily in our delivery business and selection has expanded tremendously.’

Estimates suggest that about two in five marijuana products bought in Ontario have come from the black market.

Leafly CEO Yoko Miyashita added that they were ‘thrilled’ to be working with Uber Eats to sell cannabis legally across the country.