Body hacks that REALLY work! Doctor reveals why you should sniff an alcohol wipe to beat nausea and eat a spoon of peanut butter before bed to fall asleep in viral TikTok video

A social media doctor has wowed TikTok users with a series of simple but effective body hacks – from how to fall asleep quickly to how to combat nausea.

Dr Anthony Youn, 48, from Detroit, shared the tips in a video called ‘Body hacks that actually work’, which has gone viral with 2.6 million views, and also shared the video on Instagram, with his 795,000 followers.

The board-certified plastic surgeon – known as ‘America’s Holistic Plastic Surgeon’ – topped his list of hacks with what to do if you feel like you’re going to be sick.

In the video, shared with his 4.9 million followers, he said: ‘Take a sniff of [an] alcohol wipe. Doctors and nurses use it all the time to help with nausea.’

Indeed, a 2015 study published in the Annals of Emergency Medicine found that inhaling isoproply alcohol vapor decreased nausea by more than 50 per cent, compared to other remedies, including an anti-sickness drug given to chemo patients.

Researchers did not find a clear explanation, but said it may be a case of ‘olfactory distraction’, or taking your mind off feeling sick, meaning that the same effect could be achieved with other scents.

His next tip, which may be useful for insomniacs, is to try a scoop of peanut butter before going to bed.

Dr Youn said: ‘It contains tryptophan which will help you fall asleep.’

He also shared a quick solution to get rid of numbness if your arm goes to sleep.

Dr Anthony Youn is a board certified plastic surgeon. He’s also a social media star with millions of followers. He often shares interesting medical facts and information with his fans 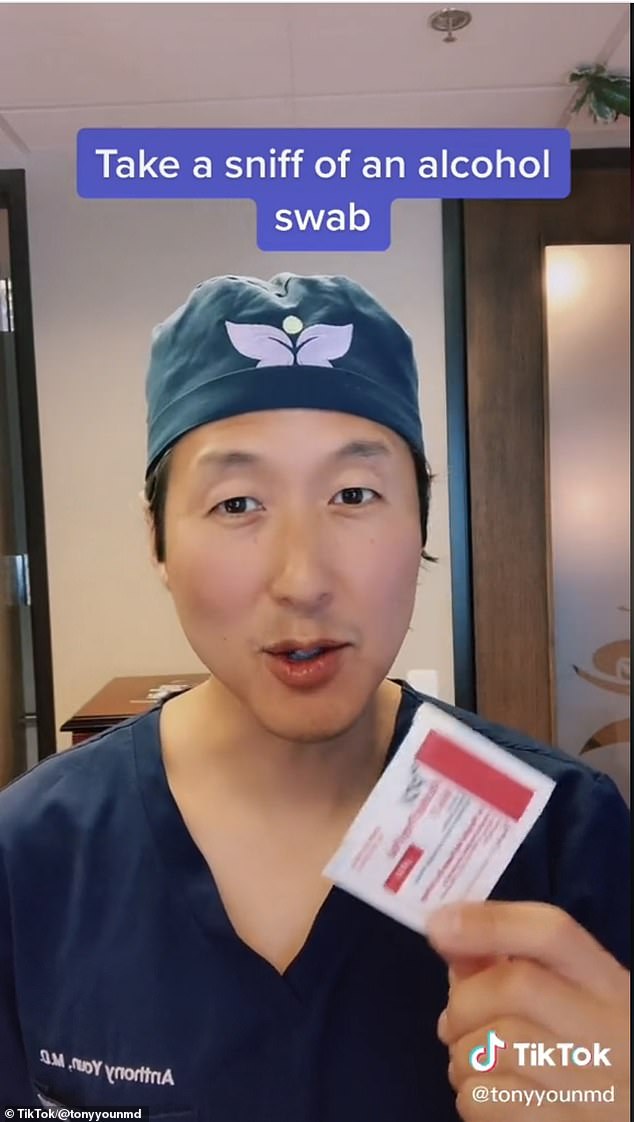 In this video, the surgeon suggested sniffing an alcohol wipe to help alleviate nausea – saying that doctors and nurses do this all the time 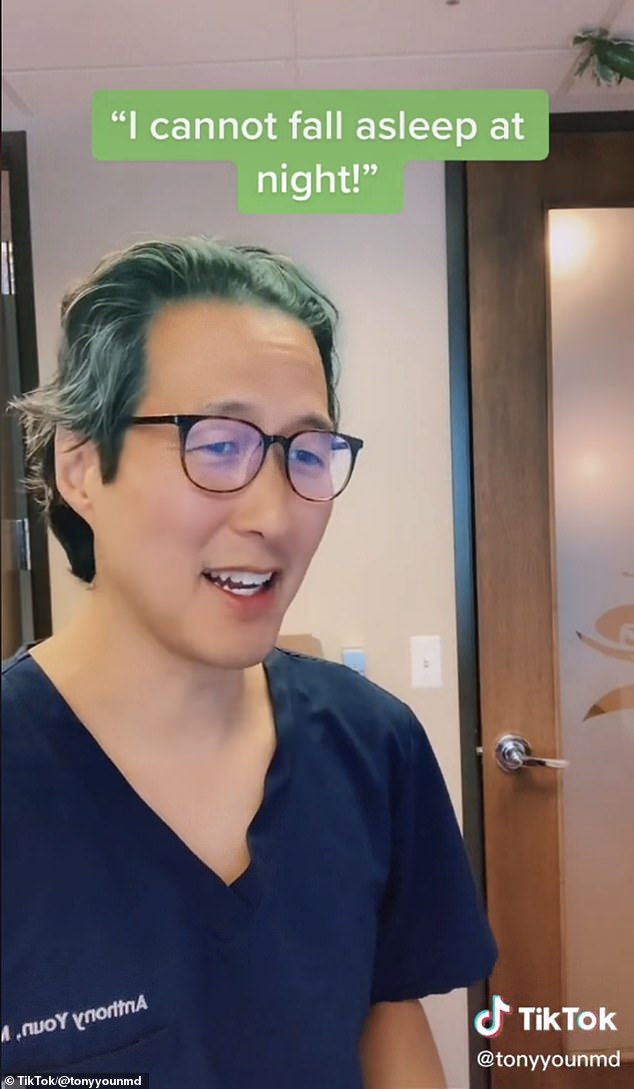 A common problem for many people is falling asleep – but Dr Youn also had a simple hack for that, which he shared in his viral video 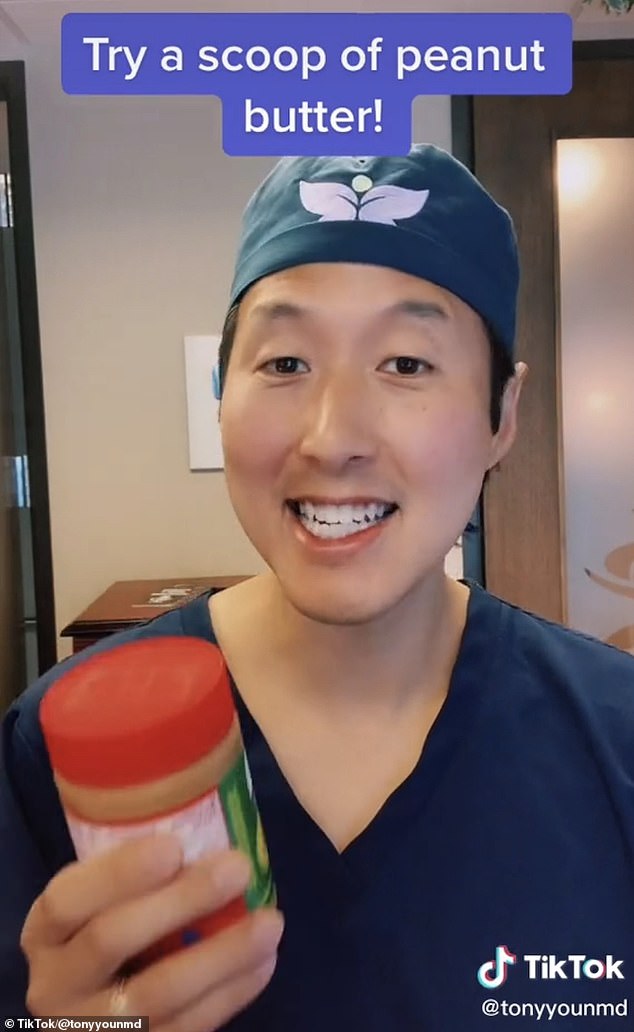 According to the doctor in his recent TikTok video, it’s worth eating a a scoop of peanut butter before bed because it contains tryptophan which can help you fall asleep

According to Dr Youn, you simply need to try ‘rocking your head from side to side a few times’.

He said: ‘That’s going to relax your neck and cause your arm to come back to life.’

The doctor finished his advice with a quick tip for beating stress.

‘Try closing your eyes, then breathing in for a count of four, then out for a count of eight. Do that a few times and you’re going to feel so much better,’ he said.

At the end of the video, the surgeon asked his followers for their input.

Opinions were mixed on the peanut butter hack, with several people highlighting their allergies. 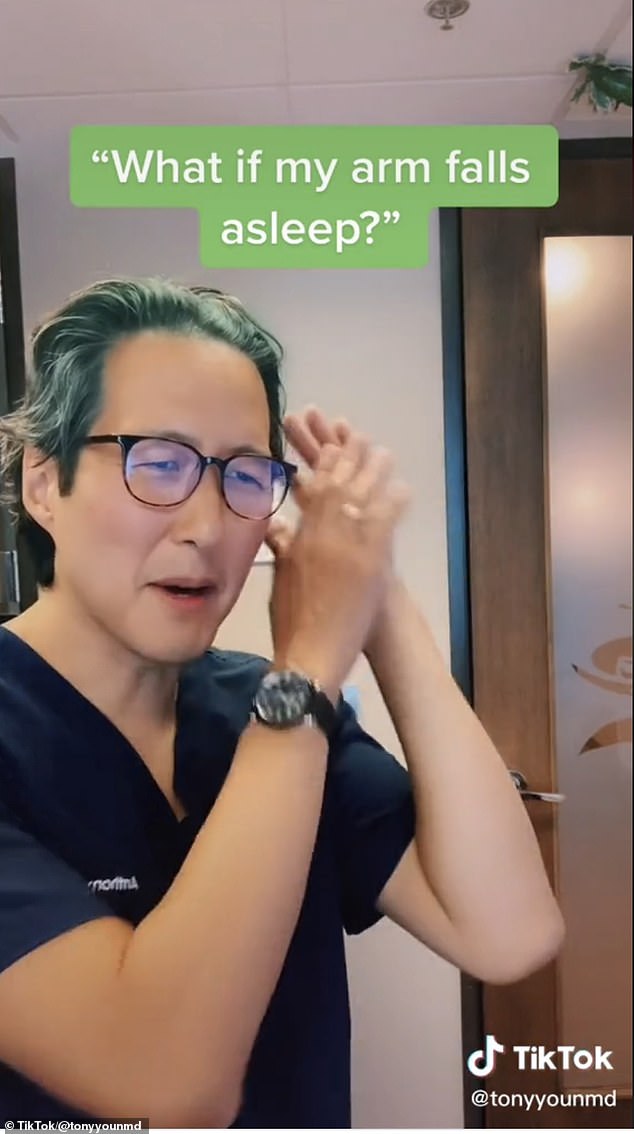 Does your arm ever go to sleep? Dr Anthony Youn has a hack for that – and it is surprisingly simple 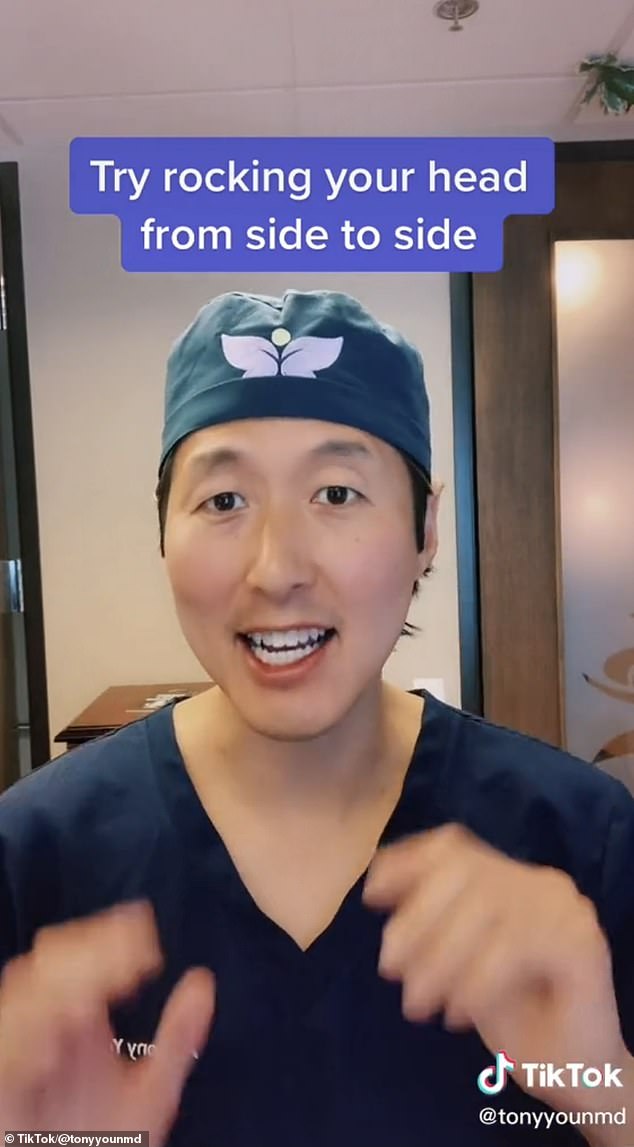 To bring your arm back to life, he simply suggests rocking your head from side to side, which will relax your neck, and make your arm feel better 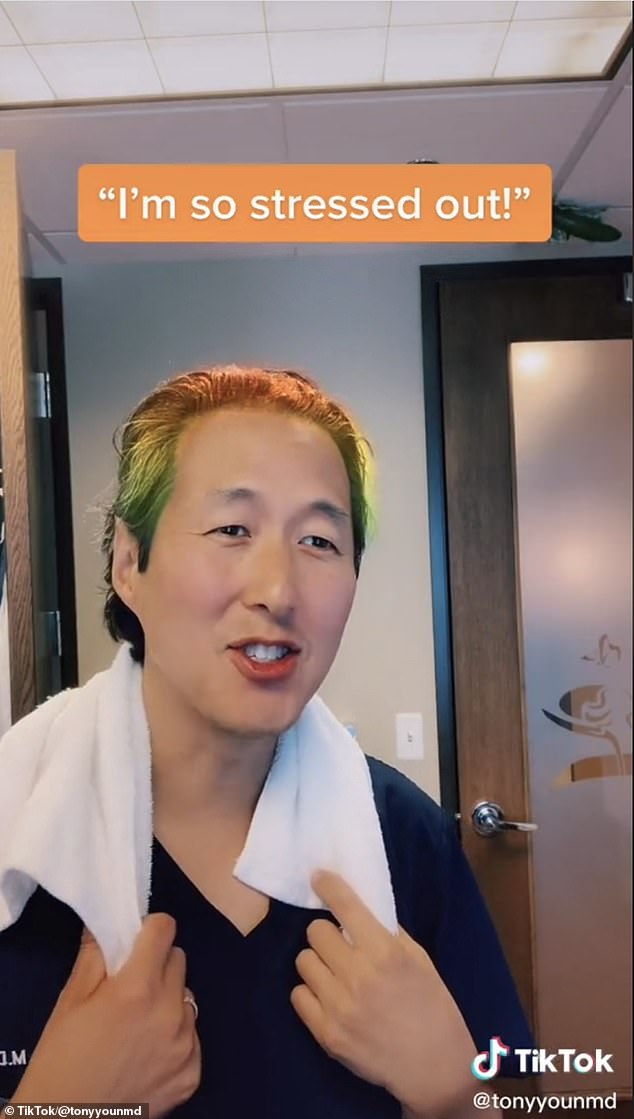 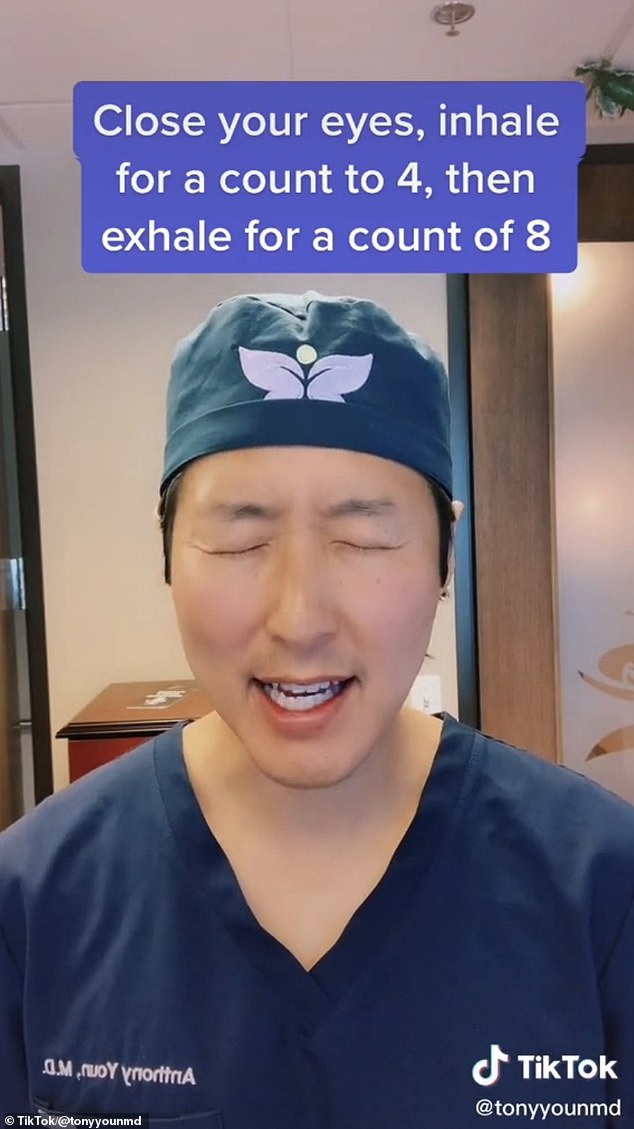 The surgeon said closing your eyes, and inhaling mindfully in then out can help you feel ‘so much better’

One said: ‘Is there anything other than peanut butter that can help? Peanut allergies suck?’

But another was more optimistic, writing: ‘I didn’t know about the peanut butter one!’

A few agreed with his alcohol hack, with one taking to Instagram to write: ‘The alcohol swab nausea trick is definitely helpful!

I’ve tried it myself. I also find that chamomile tea is very helpful to relax before bedtime and helps me fall asleep faster.’

But another wasn’t so convinced, saying: ‘An alcohol swab would remind me of all’the times I used to throw up from vodka I don’t think that would help me tbh.’