A suspected gunman is on the run in Caboolture, Queensland

A suspected gunman is on the run in Caboolture as Queensland police search dense bushland near the D’Aguilar Highway.

Police have made an emergency declaration under the Public Safety Preservation Act for the areas of Elof Rd through to Male Rd (north), the D’Aguilar Hwy (south), Bruce Hwy (east) and Pettigrew St (west).

It is understood Caboolture Hospital is located on one of the streets cordoned off by police.

Just after 11am on Friday Police responded to calls of a man inside a suspected stolen ute beside the D’Aguilar Highway, with reports the man had fired a shot from a rifle before fleeing into dense bushland.

Queensland Police are urging members of the public to avoid the area if possible.

A gunman is on the run in Caboolture, Queensland allegedly armed with a rifle

A tow truck driver was initially sent to retrieve the stolen vehicle when he discovered a man was still inside the ute.

It is alleged the man pulled out a rifle and fired a shot before fleeing the scene.

Elite Police units PSRT and SERT were called to assist in the search for the suspect with drones and the dog squad sent in to scour bushland in the surrounding area.

A tow truck company confirmed the worker had called police after he was shot at, reported The Courier Mail.

A driver had been sent to retrieve the vehicle after reports of a car crash indicated the ute had driven off the D’Aguilar Highway, the company said.

But when the tow truck driver arrived at the incident he found a man sleeping in the back of the ute.

The man, armed with a rifle, allegedly fired a shot in the driver’s direction as he ran into surrounding bushland.

The driver reportedly escaped unharmed and is now with police. 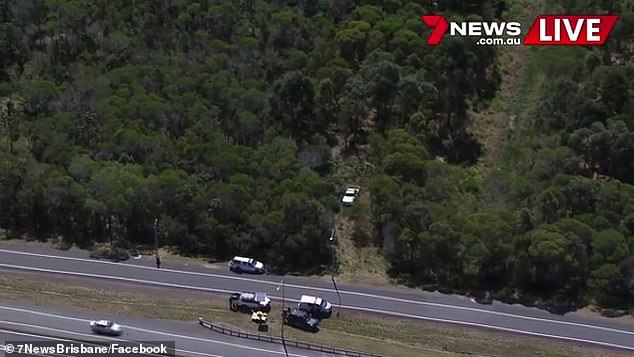