Three increasingly tetchy family members forced to spend time together while resisting the temptation to kill each other might sound like many of our lockdown experiences.

And, according to the cast of the BBC’s poignant new comedy-drama Us, it is – only this one has the backdrop of some of the most beautiful places in Europe.

Based on David Nicholls’s bestselling 2014 novel and adapted by him for television, Us is about a couple struggling to reconnect on a Continental holiday, their teenage son who’s irritated at the idea of doing anything educational, and an annoying girl who latches onto the family.

It opens with Connie, played by Saskia Reeves, waking her husband one morning to say, ‘I think our marriage may be over.’

The BBC’s poignant new comedy-drama Us is based on David Nicholls’s bestselling 2014 novel and adapted by him for television. It stars Tom Hollander as Douglas, the scientist husband of Connie, who is played by Saskia Reeves, and their son Albie (Tom Taylor)

She put her career as an artist on hold to raise their son with scientist husband Douglas, played by Tom Hollander, but now realises she wants her own life.

After years with a man who thinks spontaneity is letting out a whoop when their train crosses the border into Belgium, she’s ready for a change.

‘Connie wakes up in the middle of the night and announces, “I can’t bear it any more”, and I think we all had moments of that during lockdown,’ says Tom, best known for Rev and The Night Manager.

‘Some relationships have probably proved themselves and others have fallen apart.’

After dropping her bombshell, Connie agrees to continue with a three-week tour of Europe by train they’d been planning with their phone-obsessed son Albie (Tom Taylor) before he goes off to art college.

Douglas pledges to win Connie back on the trip. But how? He’s increasingly desperate to change himself, while the divisions within the family grow ever deeper.

Wallow in the glorious art on show

Art is one of the few things the family enjoy in the series as they move from Paris to Amsterdam, Barcelona and Venice.

‘We filmed in the Louvre when it was closed for the day, as well as the Rijksmuseum in Amsterdam and the Joan Miro gallery in Barcelona,’ says Saskia Reeves, who plays Connie.

‘We had this incredibly privileged experience of being near these paintings you’d normally have to wait to see. It was incredible to film in these galleries.’

Tom Taylor, who appears as Albie, says the experience for him was exactly the same as it was for his young character.

‘I’ve never actually been to any of those places before, so just as Albie is exploring this grand tour, so was I.

‘After every shoot the local crew would tell us about the area and show us different sights, so it was a massive learning experience.

‘A lot of the time I’m not actually acting because I was taking it all in, just as Albie would have.’ 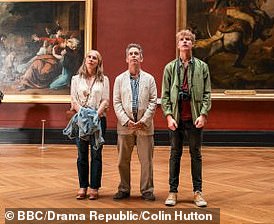 The four-part BBC1 series is sometimes heartbreakingly poignant as Douglas struggles to connect not only with the wife he still loves, but also his adored teenage son who’s so different from him.

Parts of the story are told in flashback, as we see how Connie and Douglas first fell in love and the deep sadness they encountered with the death of their first child.

The novel, which was long-listed for the Booker Prize, is a follow-up to Nicholls’ hugely successful One Day, which sold five million copies.

‘What’s good about Us is that it feels very true,’ says Tom. ‘Lots of people live long enough these days to want their lives to have other chapters.

‘There’s no scandalous betrayal or terrible moment where one person lets another down. It’s not melodramatic. It’s worse because it’s so ordinary.

‘Through the flashbacks you see the journey these two people have been on, and how the things that were once right for them aren’t right for them now.

‘What Connie is doing is courageous. She doesn’t want to be thinking, “What if?” She isn’t happy with a satisfactory existence, she wants more.

‘I’d say it’s a story of hope. Just because something is ending doesn’t mean it’s the end of everything. It’s an honest depiction of how things go.

‘It’ll be recognisable to lots of people.’

Saskia, who recently appeared as devious lady’s maid Ellis in Belgravia, adds, ‘Through the flashbacks you see how, at first, Douglas is a port in a storm for her.

‘She lacks confidence, but the irony is the support and love he gives her during their marriage makes her stronger, to the point where she feels she can leave him.

‘They weren’t all that suitable from the start, but they’re good people who’ve been joined together by some tough stuff.

‘It’s difficult for her to leave Douglas as she genuinely loves him, but she wants to try to express herself before it’s too late. She’s looking for the next thrill.

‘I think she’s a bit selfish. Douglas puts her on a pedestal but there are things about her that aren’t so cool.

‘She could have tried couples therapy first. What’s amazing about her relationship with Douglas is that he’s funny, they laugh a lot and get on really well.

‘If you lose a child you change forever, and they have that in common; it’s kept them together for a very long time. 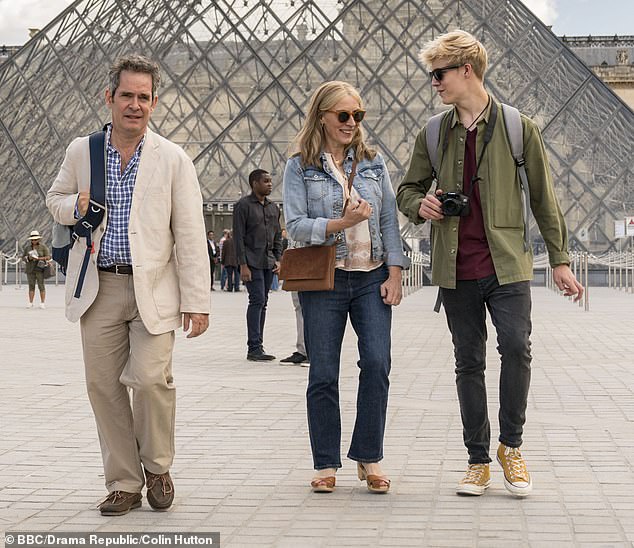 Us is about a couple struggling to reconnect on a Continental holiday, their teenage son who’s irritated at the idea of doing anything educational, and an annoying girl who latches onto the family. Pictured, Hollander, Reeves and Taylor in the drama-comedy

‘Douglas has organised this brilliant itinerary for them to go around Europe but it can also be really annoying because there’s no room for spontaneity.

Their break-up is played out in some of the most romantic cities in the world.

The family travels first to Paris where Albie meets a Scottish busker called Kat (Thaddea Graham), who gatecrashes the family holiday and throws Douglas’s plans up in the air, such as when she insists they cancel a visit to Anne Frank’s house in Amsterdam to go to a coffee shop.

‘Albie’s not keen on this trip from the start,’ says Tom Taylor, who played Suranne Jones’s character’s son in Doctor Foster.

‘Throughout the journey you see this difficult relationship with his father. Douglas says, ‘You don’t really want to be an artist?’ and Albie says, ‘Yes I do.’

Then Kat enters the picture and she has this brilliant energy, which is addictive for Albie.

She sparks this idea in him that there are better ways of doing things than the way his dad does them.

But he has a great relationship with his mother.

A lot of those generational relationships were tested with lockdown, and everyone will relate to the show because of that.’

Saskia, who has an 18-year-old son, advised Tom Hollander, who has no children, on what being the parent of a truculent teenager can be like.

‘Things got a bit sticky at home over lockdown,’ she admits.

‘So when you see the clashes between Douglas and Albie – and the disdain on Albie’s face – they definitely resonated.’

As they travel, relations deteriorate. ‘Halfway through episode two the holiday has fallen apart,’ says Tom.

‘Albie can’t take it any more and disappears, so then it becomes about trying to find him. For quite a long time it’s a holiday from hell.

‘But I think it’ll be fun for people who haven’t been on holiday this summer to go on a virtual holiday; they may not regret the staycation quite so much after watching this.’

Us starts tomorrow at 9pm on BBC1.