A true Russian epic: Following in the footsteps of Dr Zhivago during an atmospheric winter is sheer romance

My goodness, Russia is complicated. In Red Square, one side houses Lenin’s granite tomb, built in 1929, while opposite is GUM, a glitzy shopping centre that’s a triumph of capitalist excess.

And although President Putin and his megalomaniacal power is scary, I feel safer wandering back to my hotel in central Moscow than I do in London’s West End.

Probably what I admire most is how deeply Russians revere literature. Because so much of it was banned under Stalin’s reign of terror, there remains a deep respect for the written word. The great Russian writers are considered demi-gods by their people and their homes have become museums. 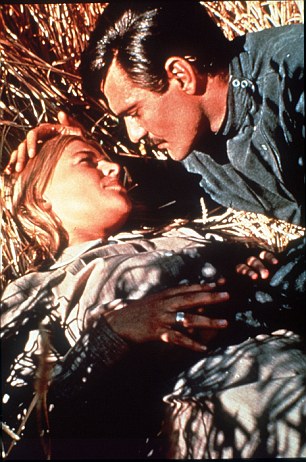 Romantic leads: Omar Sharif and Julie Christie in the 1965 film of Dr Zhivago

As the great-niece of Doctor Zhivago author Boris Pasternak, I admit to a bias. After visiting Peredelkino, the country dacha of Boris, where he spent 20 years writing his epic love story, I have come to appreciate the literary pilgrimage as an enriching way to experience Russia. Despite the plummeting temperatures, I recommend braving a trip in winter, when the wind whips your face until it hurts — but you won’t have to queue in the museums.

The writer’s colony of Peredelkino is a 50-minute drive from Moscow. Boris’s wooden dacha looks like a Scandinavian lodge, amid birch woods. His upper study resembles a monastic cell. Atypical of a writer, he did not keep any drafts of his work.

‘It is easier to clean than a hotel room,’ he said of his study. ‘My life resembles a student’s.’ In a bizarre comparison to Boris’s asceticism, Doctor Zhivago is a flashy restaurant in the National Hotel, opposite the Kremlin, filled with Muscovite models.

As a Pasternak, I was greeted like a celebrity and plied with innovative modern Russian cuisine: Caspian herring, pickled vegetables and blinis.

Marina, my Soviet guide, refused to enter the restaurant, so disgusted was she by the immoderation.

Tolstoy’s home in Moscow’s Khamovniki District has been a museum since 1911, remaining as it was in the 1890s. The great man lived here from 1882 to 1901. In the drawing room, you can listen to the last recording of Tolstoy’s voice, made on his 80th birthday. In booming tones, he instructs his children and grandchildren that they should behave themselves and listen to their elders. Playwright Anton Chekhov lived in Moscow with his mother and siblings from 1886 to 1890.

Now a museum, with display cabinets of original letters and an autographed programme from The Seagull, their home has a happy, family-oriented feel with paintings by his brother Nikolai in the drawing room and his sister Maria’s powder puff and pin cushion in her pretty bedroom.

I left Chekhov’s house to board the Sapsan, the high-speed train that takes just under four hours to get to St Petersburg.

There is definitely something Zhivago-esque about whizzing through the frozen Russian countryside at night.

Researching my book, Lara, about the true love story that inspired Doctor Zhivago, I felt as though I was stepping back a century. St Petersburg is also a city defined by its writers. Pushkin, Nabokov, Dostoyevsky and Tolstoy all wrote here.

Vladimir Nabokov, born in 1899, lived with his wealthy parents in the city until he left Russia during the Revolution. Cabinets contain the Lolita author’s reading glasses, worn-down pencils and English Scrabble board. 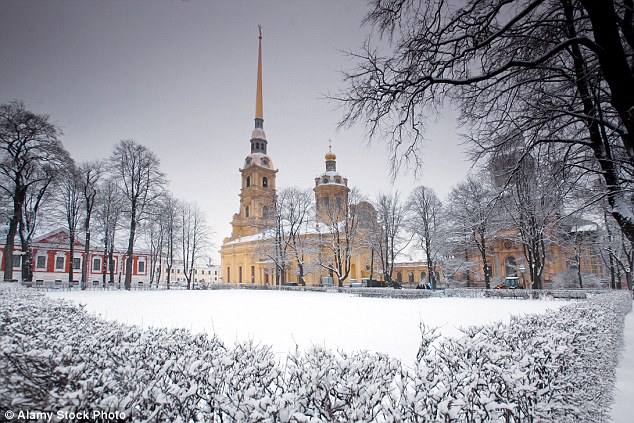 Cinematic: The Peter and Paul cathedral in St Petersburg looks serene in the snow

I learned that Nabokov hated Boris Pasternak. Zhivago knocked Lolita off the U.S. bestseller list and, unlike Pasternak, Nabokov wasn’t nominated for the Nobel Prize for literature, which rankled.

Returning to the aptly named Tolstoy Suite of the stately Four Seasons Hotel Lion Palace, I pondered what makes a literary pilgrimage so satisfying. It’s not just that the legacies of these men stand proud but more their passion for life that moves you.

Travel Facts: Plan your own literary escape to Russia

Lara: The Untold Love Story That Inspired Doctor Zhivago by Anna Pasternak is published in hardback by William Collins, £20 (harpercollins.co.uk).