A village with 115,000 people: Retirement housing is taking off in Britain, but North America has developments that dwarf the UK’s – with one estate boasting 32 square miles, 60,000 homes and more than 40 golf courses

By Laura Hutchinson In Vancouver For The Mail On Sunday

The retirement housing industry is booming in Britain, but in North America these developments have existed for almost a century – and the size of some of them dwarfs what the UK has to offer.

The Villages, in central Florida, covers an astounding 32 square miles, and more than 115,000 residents call it home. There are 60,000 homes on the vast estate and to cater for such a huge number of older people, there is a whole service and leisure economy built around them. For instance, there are over 40 golf courses.

The retirement housing industry is booming in Britain, but in North America these developments have existed for almost a century (pictured: The vast Sun City complex in Arizona)

They are often located in warm climates, so they are common in Arizona, California, Florida and Texas, and they are increasingly being constructed in and around major cities so that people have easy access to many services.

In the Canadian province of British Columbia, the Arbutus Ridge Seaside Community for Active Adults was modelled on Sun City but there are only 650 homes there, with about 1,100 residents.

The complex is built on 148 acres with a waterfront, golf course and woodland. At least one person must be over 50 in order to buy a home in the community, so many of the residents are retired.

However, more and more of the newer generation of owners continue to work. In Canada, in particular, there is a focus on providing an outdoor lifestyle – many developments feature biking and hiking trails. 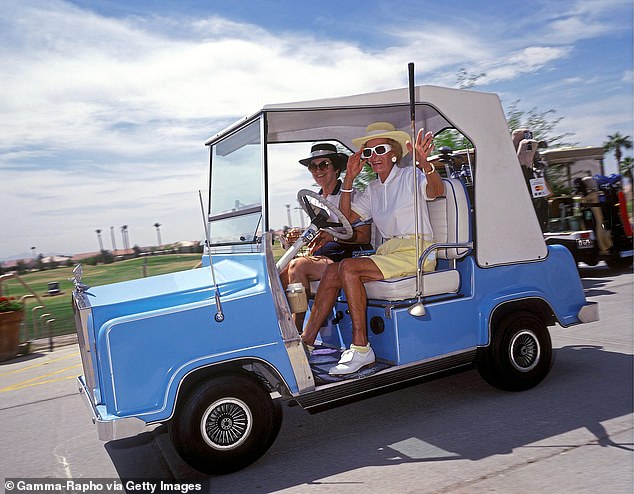 In the Canadian province of British Columbia, the Arbutus Ridge Seaside Community for Active Adults was modelled on Sun City but there are only 650 homes there, with about 1,100 residents (pictured: A couple of residents take a buggy to enjoy a round of golf)

Grand Cove in Ontario has 450 bungalows surrounded by trees, a pond and walking trails. So could the big-is-beautiful American retirement concept ever come to Britain? Honor Barratt, managing director of Birchgrove, which offers high-end retirement apartments to rent in Britain, said: ‘In America, they have the space to do these things, but in Britain we just don’t. The cost of land means that there are unlikely to be projects on such a scale.

‘I think the British reserve might count for something – for us, communal living is more akin to prison or boarding school.

‘But what I think we will see more of in the future is renting in retirement. Americans are much more used to renting – often if they change jobs they might have to move to the other side of the country. The idea of living in the same house for 35 years is quite natural in Britain, but not in America.

‘However, these days, younger people here are less likely to be homeowners because of affordability and they are more used to communal living. So they might rent all their lives.

‘When Americans come here and see how small our developments are in comparison, they can’t believe it. To them, we seem so behind the times.’