A weekend of whisky tasting in Edinburgh and the Highlands

They’re passionate about their whisky at The Glasshouse in Edinburgh but they’re certainly not po-faced about it. Like a dash of water in your single malt? Absolutely fine. It ‘relaxes the oils’ and releases the aromas. Prefer your scotch on the rocks? Perfectly acceptable. A splash of Coke? It’s akin to buying an Old Master and then daubing it with Day-Glo paint, and I doubt it’s how Ken Hanley, the hotel’s whisky ambassador, takes his dram, but he’s not about to stop you. ‘The most important thing is that people enjoy it,’ he says.

In fact, more of us are enjoying it than ever before. The total value of scotch whisky exported in 2017 was £4.36 billion – a new record high. Scotch accounts for more than 20 per cent of UK food and drink exports. The world is drinking it as fast as the Scots can make it. And it does take a wee while to make.

Did you know the name ‘scotch whisky’ can only be given to whisky made in Scotland that has aged in oak casks for a minimum of three years but a single malt – meaning the product of a single distillery – is usually matured for at least ten years?

Calton Hill: An elevated view of Edinburgh where The Glasshouse is host to Scotch tastings. But beware – whisky snobs will sneer and smirk if you do anything as uncouth as adding Coke

There are hundreds of different single malts and they have quite a few of them in The Glasshouse’s Snug bar. The recently refurbished hotel is cannily taking advantage of the drink’s booming popularity to offer bespoke ‘elite whisky experiences’, designed to inform, educate and entertain novices and experts alike.

We kicked off in the Snug with whisky cocktails – delicious ‘gateway’ drinks, cunningly crafted to tempt you into trying the unadulterated hard stuff.

The Glasshouse’s refreshing Whisky Sour comes topped with a froth of Punk IPA, one of the signature beers of Scots firm BrewDog. The Peaty Kiss is an unlikely marriage of Laphroaig whisky and Jagermeister that proves a match made in heaven. And beware the Dram Of The Dead, a potent, fruity number modelled on the rum-based Zombie. 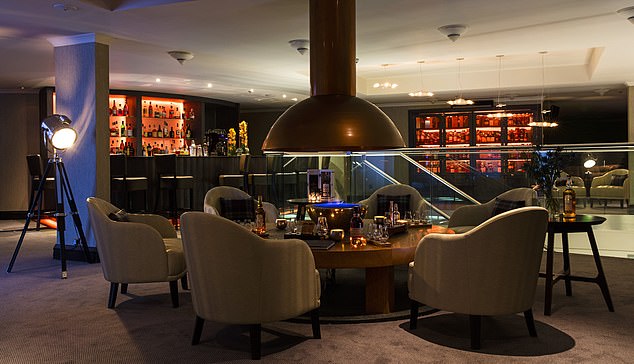 The Snug at The Glasshouse, where you can sample whisky cocktails including the Peaty Kiss (with Jagermeister) and the Dram of the Dead (with fruity hints, like a Zombie)

At dinner, Ken talked us through the drinks served. Whisky is made from just three ingredients – barley, yeast and water – yet has an extraordinary variety of flavours. These are partly due to what the French call ‘terroir’ but the far more significant factors are the production process and the type of barrel – bourbon, sherry, port, rum – in which whisky is matured. ‘The wood makes the whisky,’ as the saying goes.

Single malts are classified by their region of origin: Highland, Lowland, Speyside, Islay and Campbeltown. Whiskies from the same region often share some flavour characteristics.

So, the 12-year-old Glenkinchie we had with our cullen skink is a Lowland with the lightness and the fruit and floral notes said to characterise that region. The 15-year-old Bowmore that accompanied the cheese course spends its final three years in sherry casks and is dark, sweet and smoky. The Highland and Speysides we tried in between were as different again. 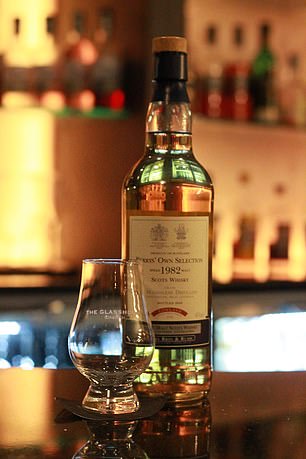 A 1982 single malt is among the selections available to savour at Edinburgh’s The Glasshouse, where punters can learn about the characteristics of Scotch

The next day we visited Deanston Distillery in the Highland region. The tour takes in the mill, where the malted barley is ground; the huge red mash tun, where it’s mixed with hot water; the still room, with its two pairs of huge copper stills; and finishes in the chilly warehouse, where the whisky is left to mature in oak casks. The air here is heavily perfumed with a sweet, heady aroma due to what’s known as the ‘angel’s share’. No matter how well made a barrel is, about two per cent of the whisky in it will evaporate. It means that every year, more than 100 million bottles’ worth of scotch simply vanishes into thin air.

Some timorous souls might judge 11.30am too early to sample a 60 per cent ABV ‘new make’ spirit – the clear, un-aged rocket fuel that comes straight from the still.

Not me. I can report that Deanston’s ‘new make’ has notes of, well, alcohol. ‘Yeah, it’s not really a breakfast whisky,’ our guide Garry conceded.

The actual Deanston whiskies we tried, drawn straight from the cask, were excellent.

After lunch it was off to Edinburgh’s Old Town and Royal Mile Whiskies, a bustling Aladdin’s cave of scotch (there is a branch in London – outreach work bringing culture to the benighted Sassenachs). Here you can buy a tiny bottle for a pound or a 50-year-old Caol Ila for £7,500.

Manager Mark Davidson told me: ‘The current fashion for all things whisky may have something to do with the engaging back story of the brands. The heritage lends substance and credence. 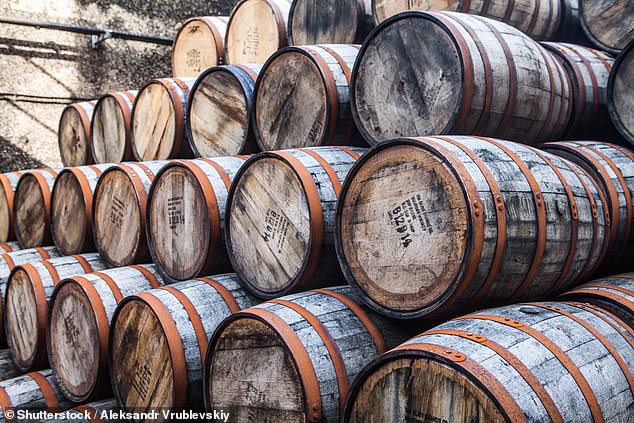 Whisky galore: Some oak barrels at the Deanston Distillery that add sweet notes to the Scotch 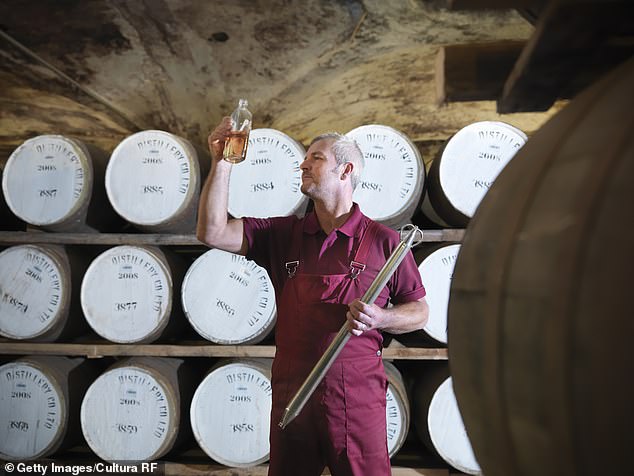 Sláinte: Tasting and the input of experts can lead to knowledge which smacks of ‘geeky connoisseurship’ but you will learn a lot about the history of Scotch and the craft of making it

‘There is also an odd mix of geeky connoisseurship associated with the details of production and history. This lends itself well to festivals, tastings and collecting where enthusiasts can learn or just show off.’

When not learning about whisky, you can explore sophisticated, cosmopolitan Edinburgh, or you might choose just to relax at The Glasshouse. Hanging out at this five-star hotel is no great hardship. All 77 rooms were refreshed last year and the beautiful two-acre roof garden has great views up to historic Calton Hill.

The Glasshouse’s whisky experience is not a budget break: Edinburgh is a top tourist destination, The Glasshouse is a world-class hotel, and fine whisky is an artisanal product that requires extraordinary skill and craftsmanship to create. But as a rare treat, a whisky weekend is money very well spent.

Sláinte, as they say in Scotland.