A woman destroyed her £800 wedding dress by covering it in paint and setting it on fire to ‘heal’ after her traumatic divorce.

Emma Lou, 38, from Nottinghamshire, divorced her husband in December 2018 following a four-and-a-half year marriage and a 10-year relationship.

The divorcee came up with the idea of ruining her dress by covering it in paint that year, then, in 2019, decided to place it in a fire pit and set it alight.

Emma Lou, 38, from Nottinghamshire, destroyed her £800 wedding dress by covering it in paint and setting it on fire to ‘heal’ from her traumatic divorce 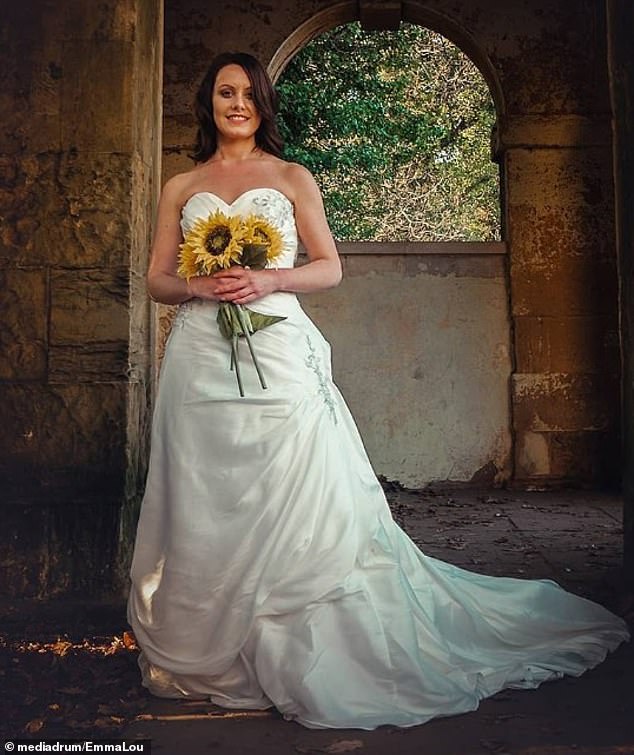 The holistic healing therapist and model got divorced in December 2018 at the age of 30 after been with her husband for ten years, and been married for four and a half 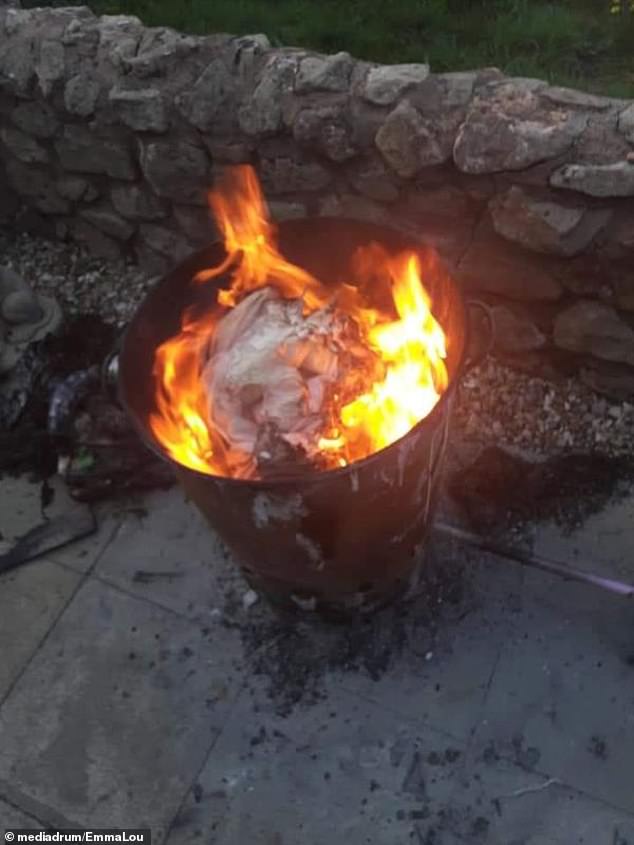 The divorcee came up with the idea of ruining her dress by covering it in paint that year, then, in 2019, decided to place it in a fire pit and set it alight (pictured)

‘Our marriage really was quite toxic between us, we argued,’ she said.

‘I got diagnosed with fibromyalgia from being 23. It took a lot out of my life, my dream job and affected our relationship.

‘I was very depressed and stressed back then, but we got married even though I wasn’t well. In time our relationship got worse.’

Emma began a journey of self-healing and discovery.

‘In 2015 as I left him. It been a rollercoaster. I grieved the loss of our marriage but also grieved my hurts from it,’ she said.

‘I came to my spiritual path with this journey, finding crystals, doing reiki and having counselling to help heal my past has some of my hurts didn’t just come from my husband but past to and childhood trauma from being adopted at birth and bullied at school.’ 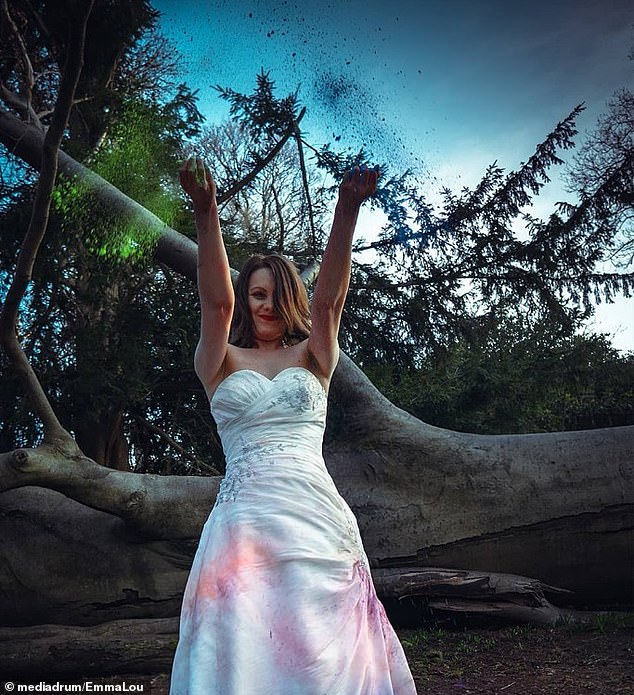 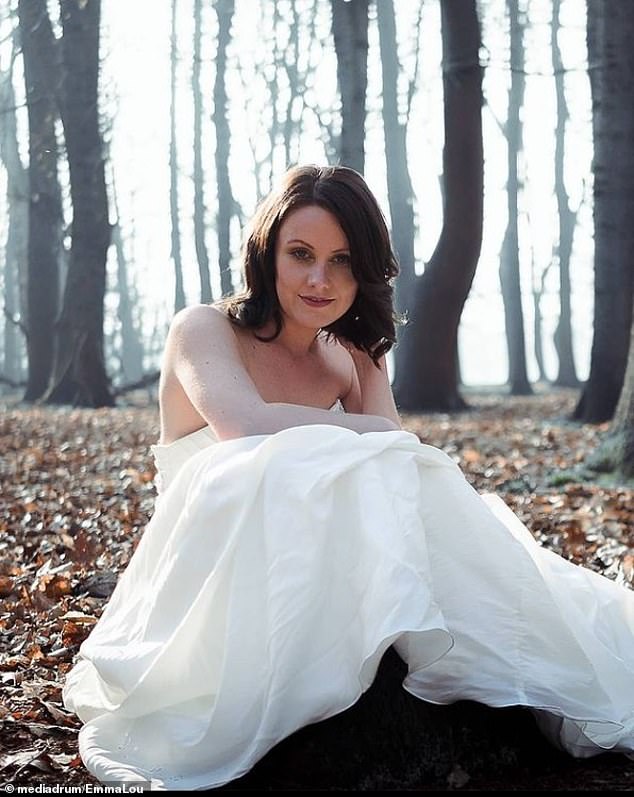 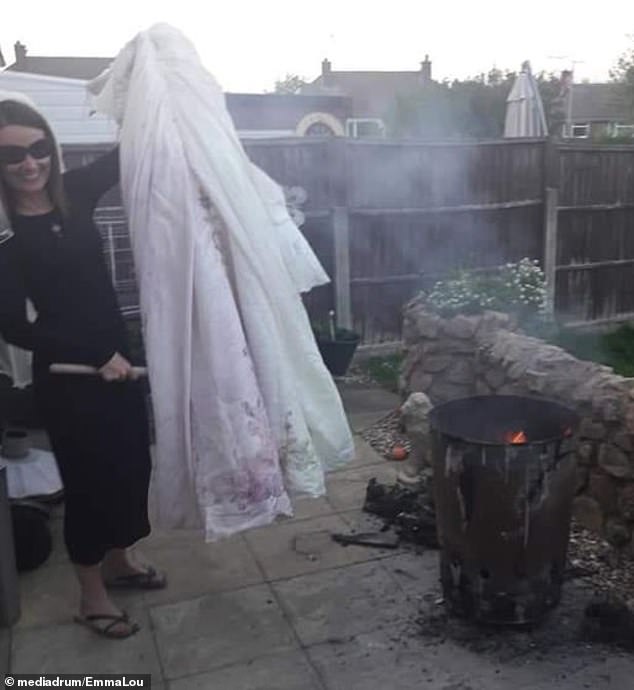 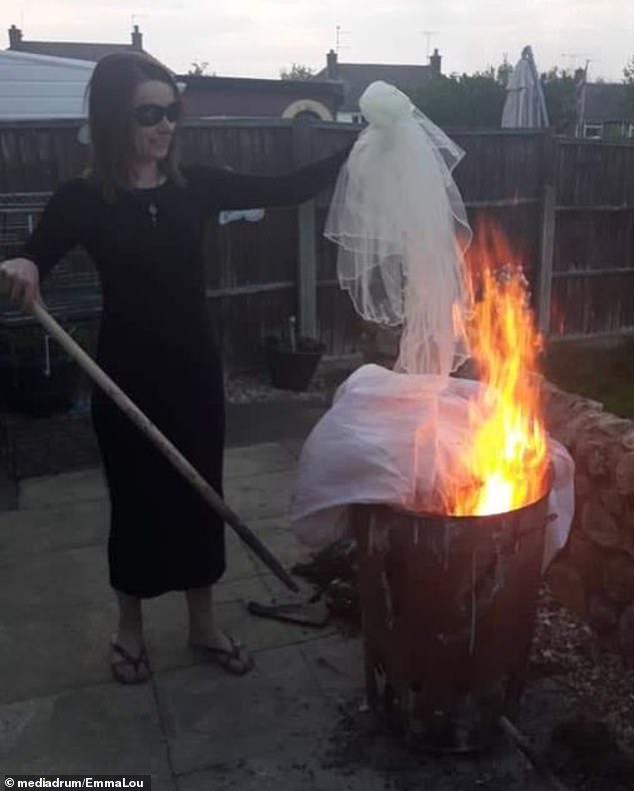 Emma opened up about how she came to destroy her wedding dress.

‘Down the road of my healing I decided to give away my dress to a woman who was getting married but was dying, but they never even bothered to get back in touch with me,’ said Emma.

‘In time a friend was talking about trashing hers and I said I’d love to do that. I had the idea in my mind of trashing it with powder paint to bring back colour to what was dark.

‘I started modelling and a photographer got in touch with me about a shoot but I asked if we could do my idea. 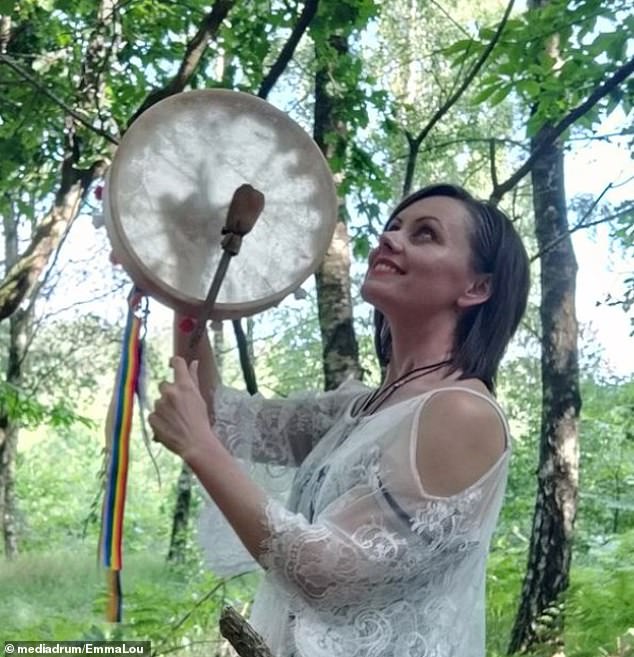 The holistic healing therapist Emma is very spiritual finding crystals, doing reiki and having counselling to help heal her from her past 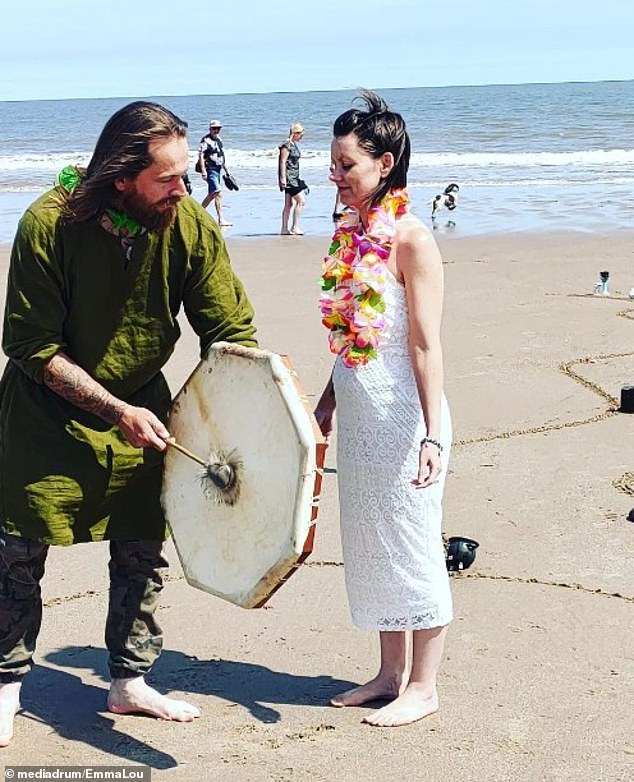 Emma is very spiritual and she often practiced reiki, she even had a rebirth ceremony on the beach in Nottinhamshire

‘We got together at Wallaton park in Nottingham and he asked, ‘can we do some pictures before you trash it?’ I said yes so, we walked round.

‘It was an amazing feeling. I loved it so much that I felt like a celebrity. People thought I was getting married until I told them what I was doing. One woman said, ‘you go girl’.

‘When coming to trashing it, we hid so we wouldn’t get in trouble. I threw paint everywhere, all around me. I even got a paint bomb.

‘After the day ended, I got home, and I had this amazing energy around me, and I felt so empowered. I’d recommend any woman or man to trash their outfit it’s like an ending of a cycle, bringing in new beginnings.’ 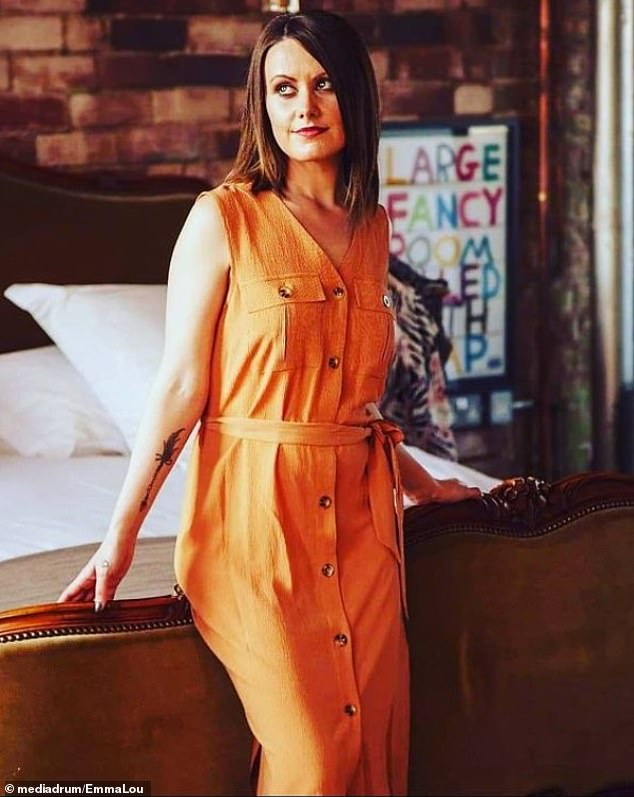 The model got diagnosed with fibromyalgia at 23 years old and she said it took a lot out of her life, including her dream job and it affected her relationship 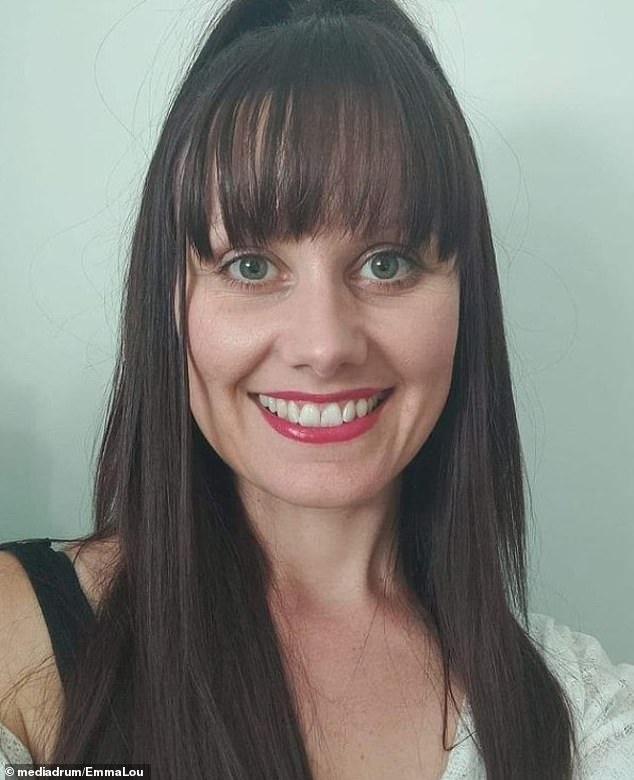 She said she grieved the loss of her marriage but also grieved the hurts from it, she is now happily single

For Emma, the paint was not enough so she took it one step further.

‘After doing it I still had the dress and thought I can’t just throw it away,’ said Emma.

‘April Easter Sunday I asked my friend if she was free. She had a fire pit and she said to come round. So I took my dress and wore black, no idea why, and thought time to let my past go a witchy way.

‘We let go by setting things on fire. I thought well it’s definitely me. As it burned, the flames got higher and looked like dragons coming out of the flames. It was a great experience and I felt a shift of energy.’ 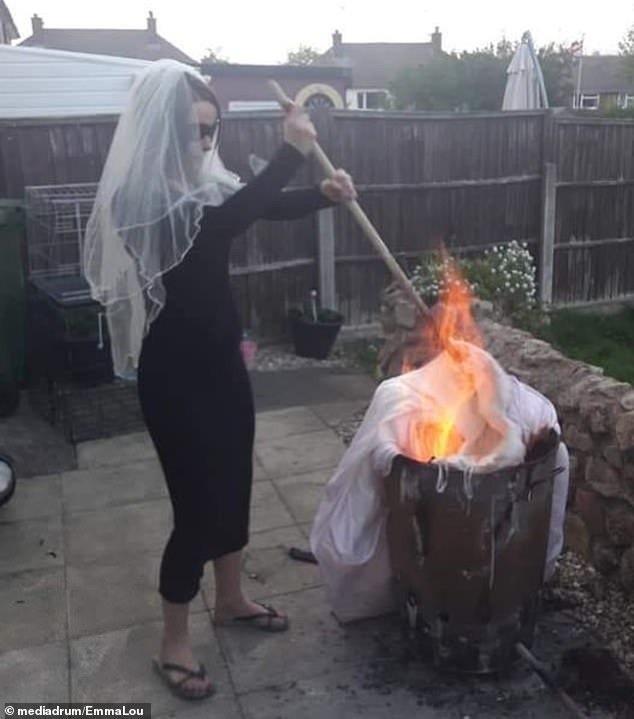