A woman who can’t speak, sit up or eat has been denied life-changing treatment

A former senior director for the NHS has been denied life-changing treatment after the health service claimed there was ‘no evidence that the treatment would work’.

She cannot sit up for more than few minutes without passing out, her vision and breathing are affected and light, noise and even a breeze coming in the window can cause her burning pain.

Mrs Conrad, from Wilton, was arranged to trial a treatment known as intravenous immunoglobin (IVig) for three months at the beginning of the year.

Wiltshire Clinical Commissioning Group agreed to fund the £15,000 cost for the pioneering medication. The results, she said, ‘were nothing short of miraculous’.

However, when Mrs Conrad was scheduled to have her next dose of IVig in June, she was told that the funding could not be obtained.

Dawn Conrad, 45, cannot sit up, speak or eat properly due to a rare autoimmune disease. She has been denied funding for treatment intravenous immunoglobin (IVig), despite a three-month trial giving results ‘nothing short of miraculous’ (pictured with her husband, Simon, and son, Daniel) 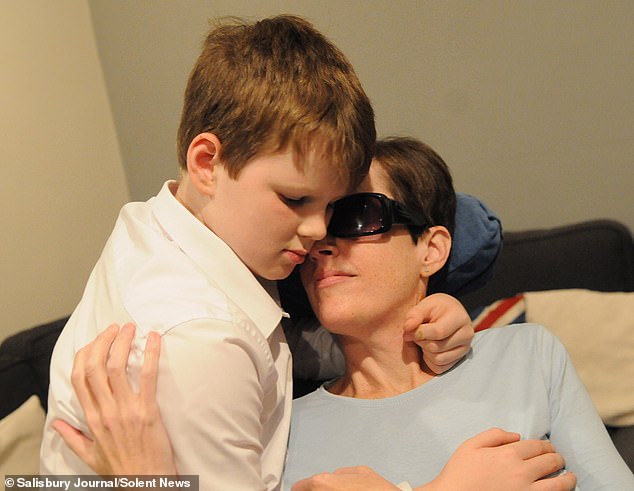 After submitting a further request, the plea for funding was rejected, and the NHS said there was no evidence of ‘clinical exceptionality’, or proof that the treatment would work, despite her significant improvement.

Taking into account Mrs Conrad’s prescriptions, personal health budget, personal independence payments and inpatient costs, the NHS currently spends about £70,000 each year to keep Dawn alive, estimated to cost £1.9million over the course of her lifetime if her condition does not worsen.

In a written statement because she can not talk, Mrs Conrad said: ‘How can they take my life away from me? How can you put a price on a life?’

Mrs Conrad became severely unwell six years ago and spent five months in hospital while doctors tried to work out the cause.

How does intravenous immunoglobin (IVig) work?

Immunoglobulin is part of your blood’s plasma. It has antibodies in it to fight germs or disease.

If you have an immune deficiency, your body can’t make enough antibodies to fight infection.

IVIg gives you the antibodies that your body can’t make on its own.

Quite large amounts of immunoglobulin can be given this way and for this reason treatment is only needed every three weeks or so, with each treatment taking between two and four hours.

In autoimmune diseases like lupus, the treatment may help your body raise low red-blood-cell counts.

Some of the diseases that intravenous immunoglobulin (IVIg) can treat include:

When people donate blood, immunoglobulin can be separated out.

Then it can be given to you through a vein in your arm, or IV.

The plasma is tested for serious infections like hepatitis and AIDS. The plasma is purified before it’s used for IVIg therapy.

In the past, there have been times when the supply of immunoglobulin in the UK has fallen, according to Great Ormand Street Hospital. This has happened if manufacturers have had to stop production for a few months.

Immunoglobulin is being used for more and more different illnesses, not just primary immunodeficiencies (PIDs) – a group of more than 350 rare, chronic disorders.

As a result, solutions to help safeguard supplies for PID patients have been put in place.

These include manufacturers ‘ring fencing’ immunoglobulin especially for PID patients, and NHS systems to ensure immunoglobulin healthcare needs are met.

She then spent two years at home, on a hospital bed in her dining room, unable to go outdoors.

Mrs Conrad had to take more than 50 tablets and three injections each day as part of her intense treatment.

Her husband Simon, a lieutenant colonel in the army, spent five years balancing his career with caring for his wife and their nine-year-old son Daniel, but the pressure led him to have a nervous breakdown 18 months ago.

The family thought they had turned a corner at the beginning of the year when a neurologist in Southampton diagnosed Mrs Conrad the rare autoimmune disease, Autoimmune Autonomic Ganglionopathy.

The neurologist arranged the three-month trial of pioneering medication IVig, of which Wiltshire Clinical Commissioning Group agreed to fund at the cost of £15,000.

As she cannot speak, Mrs Conrad revealed in a written statement how her symptoms has significantly improved.

She said: ‘For the first time in six years I didn’t feel gravely ill all of the time and all of my symptoms drastically reduced,’ she wrote.

‘I was able to sit up without passing out, I was almost pain free and I was eventually able to walk 15 metres with just one elbow crutch.’

Since treatment was withdrawn, Mrs Conrad’s condition has deteriorated and she is now back to the state she was in before starting the IVig trial.

She added: ‘I was, and still am, distraught.

‘The neurologist has said there is no other suitable treatment for me, and NHS England will not fund the one treatment that could give me life..’

‘I’m just existing every day, feeling gravely ill. I can’t do anything, I can barely eat and I can’t talk. I cannot live like this.’

Mrs Conrad’s nine-year-old son, Daniel, is acting as a young carer for his mother, and said he missed her being ‘energetic’ and taking him out on the bus, as she had done before she became unwell.

He was just two when his mother was first taken into hospital.

Mrs Conrad has never been able to take him to school or take part in his primary school life, which ends next year.

Daniel added: ‘I feel quite sad that she’s poorly now, because she can’t do what she used to, and I really miss her.’

The family are appealing to the NHS to meet the costs of ongoing IVig, and say it is ‘entirely nonsensical’ for them not to pay.