This ‘rasta’ cat was abandoned by its owners with over two pounds of dreadlocks on its back.

Volunteers from the ‘Radeau des Animaux’ animal rescue centre saved the male cat after he was ditched in Ferel, in France’s Brittany region.

The head of the animal centre, Dominique Bacot, said the cat, called Chamade, had long tufts of fur he had when he arrived at the refuge.

Chamade the nine-year-old ‘rasta’ cat, pictured, was rescued in Brittany, France with over two pounds of knotted dreadlocks covering his back 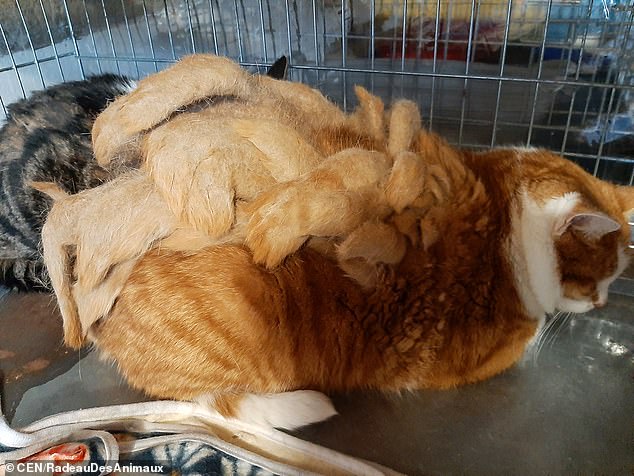 This image shows Chamade after his rescuers delivered him to the ‘Radeau des Animaux’ animal rescue centre in Ferel. The volunteers said they’d never seen such an impressive ‘rasta’ haircut on a cat 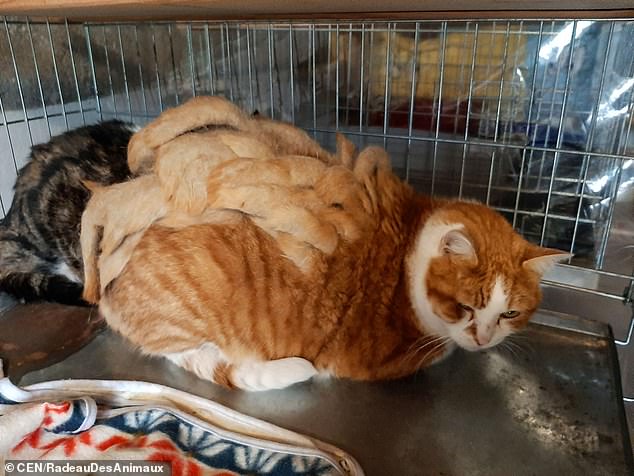 The dreads prevented the abandoned feline, pictured at the rescue centre, from cleaning himself properly

Cats can develop the ‘rasta’ look when their undercoat sheds and traps itself under the top layer of fur, in a process known as matting. Most owners focus only on the top layer when grooming their cat and neglect the twisted knots developing beneath.

If the matting is not removed, a hard pelt can develop. A pelt is hardened fur, tightly entangled close to the animal’s skin and can only be removed by shaving.

The last image shows a much happier Chamade after volunteers sheared off the dreadlocks.

She said that the poor animal ‘could not even clean itself any more, to the point that it created impressive tufts’.

She added: ‘We have cut about 2.2 lbs of hair off after it clumped together into dreadlocks. Everything was on its back, where the cat could not lick itself.’ 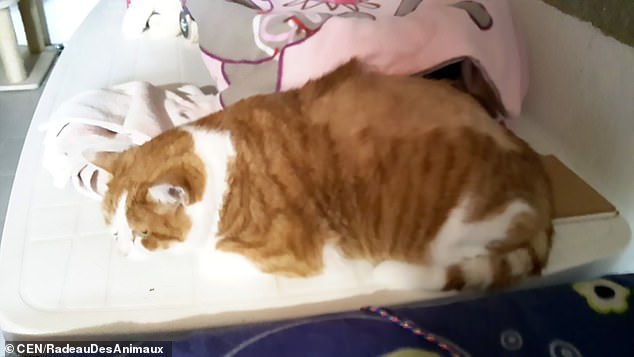 This last image shows a much happier Chamade after the ropelike strands of hair were sheared from his back at the animal rescue centre in Brittany, France

The other volunteers said they had never seen such an incredible ‘rasta’ haircut on a short-hair cat, with one saying: ‘This generally happens to animals with long hair that have not been looked after for a long time.’

Chamade, who is nine years old, was promptly taken in by a loving family after losing the locks.

The family adopted him and his pal Chad, also nine, who also needed to have some sprouting dreads removed by the volunteers.

How Do Cats Become Rastas?

Ropelike ‘dreads’ develop on a cat’s back when they go through processes known as ‘matting’ and ‘pelting’.

Matting happens when the cat’s undercoat sheds and gets trapped under the top layer of fur.

Felines who aren’t regularly cleaned can also quickly develop the ‘rasta’ look when oily skin and dirty fur builds up.

If the matting isn’t treated, a pelt can form, which is a hardened knot close to the skin.

Pelts can’t be combed out and always need to be removed by shearing the feline.