ABC News stalwart Barbara Miller has been trolled by a Donald Trump fan as she went to air, after the former US president said he would vie for the top job once again.

Ms Miller was accosted by the Trump devotee on Wednesday (AEST) in Florida, who stood behind her holding a sign to the camera that said, ‘Fake News is CNN’.

The veteran journalist was doing a live cross to the ABC studios in Sydney reporting on Trump’s announcement he would run for president in 2024.

Veteran journalist Barbara Miller was accosted by the Trump devotee on Wednesday (AEST) in Florida, who stood behind her holding a sign to the camera that said, ‘Fake News is CNN’ (pictured) 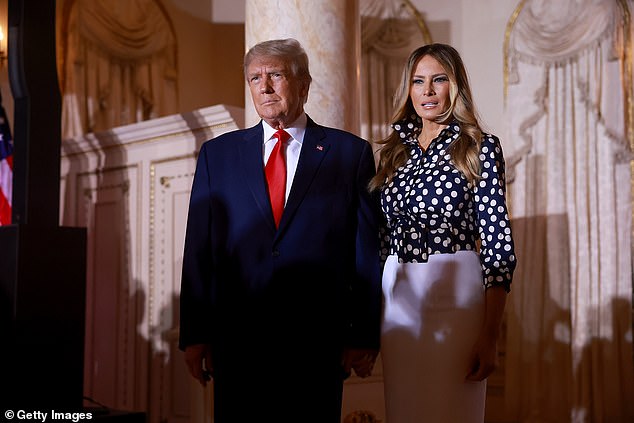 Donald Trump (pictured, with wife Melania) officially announced he is running for president for the third time in 2024 in a speech attacking President Biden, the ‘radical left’ Democrats and their record on the economy and the world stage in the two years since he left office.

The smiling man entered the frame with the big sign as she reported on Trump’s ‘announcement’, with ABC vision quickly switching to footage of Trump at the rally.

‘We have had a number of supporters here throughout the day, particularly our dear friend here, who keeps turning up every time we do a cross, with this sign,’ Ms Miller said.

‘Many of these people say the news is fake news and shout out to the media, who have been gathered here… very loyal Trump supporters.’

The man was seen in the vision swaying back and forth as Ms Miller reported on the announcement, including the Republican party’s mixed response to the business mogul’s return.

The awkward moment comes after Ms Miller mistook an important official at the Queen’s funeral as a member of the public. 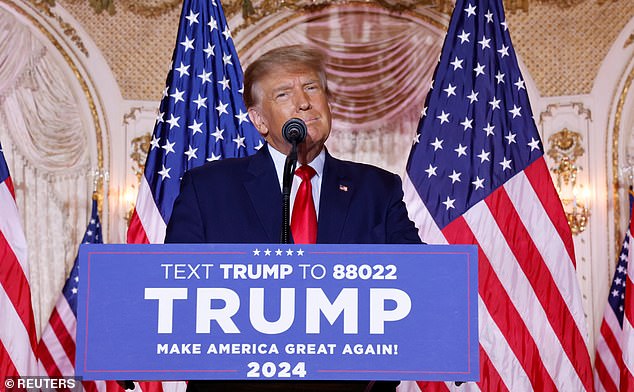 The television reporter only wanted a few words from a random ‘Joe Public’ in the queue to view the Queen’s coffin.

So she was startled to find the modest man patiently inching his way forward was actually Elizabeth II’s former officer in parliament, Black Rod – who had helped organise the very lying in state he was slowly heading for.

The Black Rod is the monarch’s representative in the House of Lords and they famously have to bang on the door of the Commons ahead of the opening of parliament.

The chance interview took place when Ms Miller thrust her microphone at a casually dressed man with grey hair on the embankment across the Thames from Parliament.

He turned out to be Lieutenant-General David Leakey, 70, who wore the tights and buckled shoes of Black Rod for seven years until 2018.