ABC’s World News Tonight with David Muir has dethroned NBC as the year’s most-watched evening newscast for the first time in 21 years.

World News Tonight averaged 8.25 million viewers in the year up to August, while NBC’s Nightly News had 8.17 million and the CBS Evening News had 6.56 million.

Despite recent declines, evening newscasts still reach 23 million viewers each weeknight and are considered the flagship broadcasts of news divisions.

NBC has been dethroned as the year’s most-watched evening broadcast by ABC’s World News Tonight with David Muir, pictured

‘One has to recognize the breaking of one of the great streaks in television,’ said James Goldston, ABC News president.

Muir and his team ‘worked immensely hard to do that, and they’ve done it in an extraordinary period of news.’

Like much in television, the programs aren’t a growth industry. ABC moved in front by essentially staying even from the previous two years while its rivals lost viewers.

NBC touted its victory among the 25-to-54-year-old demographic, the statistic primarily used as a basis for advertising sales in news.

NBC News ran a full-page newspaper advertisement boasting that it was No. 1 for the second season in a row with Nightly News, the Today show, Dateline NBC and Meet the Press.

The small print noted they were wins among specific demographic categories, not among all viewers.

‘If you are going to go by the quality of the broadcast, ours is superior,’ he said.

‘If you’re going to go by business measurements, we’re winning in the only category that matters.’

Goldston said he wasn’t going to dismiss the large number of viewers not included in that category. ‘We want to be America’s favorite news show,’ he said.

‘In a world consumed by social media and fake news, people are thirsting to get a straightforward account of what happened that day,’ he said. 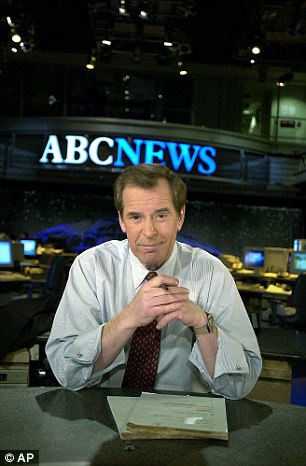 ‘I think World News Tonight does that better than anybody.’

What’s most important is building on the victory, he said.

ABC’s Good Morning America ended a long victory streak by Today earlier in this decade, and hasn’t relinquished that lead since.

There’s some question about whether NBC’s Lester Holt, who has traveled to Puerto Rico to anchor Nightly News from the hurricane-ravaged territory this week, may be hurt by association with one of NBC News’ biggest success.

MSNBC and its left-leaning prime-time lineup has been a huge hit in the Age of Trump.

Do some of the president’s supporters who don’t like MSNBC take it out on people at NBC News?

Oppenheim said the audience is sophisticated enough to know the difference between the products, just like The New York Times has separate opinion pages and news pages.

CBS, whose evening newscast is in transition with Anthony Mason as interim anchor, instead looked to the morning to tout accomplishments.

CBS This Morning, while still in third place, is more competitive with ABC and NBC at that time of day than the network ever has been.

Its rivals, meanwhile, bleed viewers. Good Morning America averages 4.4 million viewers, but is down from 5.5 million four years ago.

Today has dropped from 4.9 million to 4.2 million in the same time frame.

Meanwhile, CBS has gained audience in that time from, going from 3 million viewers in 2013-14 to just under 3.6 million now.