Abducted from school by terrorists, their kidnap made headlines: why haven’t they been rescued?

BRING BACK OUR GIRLS

Don’t worry! We are soldiers!’ yelled the heavily armed men who arrived at Chibok Government Secondary School for girls at five minutes to midnight, April 14, 2014.

Gathering outside their dormitory, the girls took one look at the men’s tattered uniforms and flip flops and knew these were not soldiers. They were members of the Islamist Boko Haram terrorist group: Boko meaning ‘Western education’ and ‘Haram’ meaning ‘forbidden’.

The terrorist unit which rolled into Chibok — a Christian town in Nigeria’s predominantly Muslim North — was a looting party, and one so disorganised they had forgotten to pack enough water to drink on a day of scorching sun. They studied the 276 girls, mostly aged 16-18, standing before them.

Joe Parkinson and Drew Hinshaw have penned a book investigating the kidnapping of 276 girls from Chibok Government Secondary School for girls in 2014. Pictured: Islamist group Boko Haram fighter at an undisclosed location standing in front of the girls

Although Nigeria is one of the most literate societies in the developing world, this was a region where just 4 per cent of girls completed high school. So these girls had been some of the ‘lucky ones’ studying for exams that were among the most challenging in West Africa, requiring them to be fluent in two languages (Hausa and English) in addition to their mother tongue (Kibaku).

Having stolen the school’s food, petrol and brick-making machine, the trigger-happy looting party torched the school and began arguing about what to do with the trembling girls. ‘Put them in different places and burn them!’ said one. ‘Let them lead us to their parents’ homes!’ parried another. ‘No,’ said the most persuasive insurgent. ‘Let’s take them.’ The kidnapping was an afterthought.

The complicated story of what happened next is told with factual rigour, crisp political insight and deep compassion by Pulitzer-nominated American Wall Street Journal reporters Joe Parkinson and Drew Hinshaw.

Their brilliant book interweaves raw, traumatic accounts of what happened to some of those individual hostages with the complex story of how the many, high-profile, high-tech international rescue efforts failed to recover them.

Writing in pacy thrillerese, the authors begin their story with a prologue in which Michelle Obama — then First Lady — hears the news (via a pop industry Twitterstorm) and ponders the wisdom of tweeting about it. Her Chief of Staff, Tina Tchen, was a Twitter sceptic. A lawyer by training, Tchen was smart enough to worry that the tweeter lost control once the message went live. Neither woman was an expert on Nigerian politics. They wanted to help and worried tweeting might make the situation worse for both the hostages and the nation.

Her urge to align herself with the innocent victims of a brutal kidnapping — aspirational young black women like her own daughters — is understandable. As is her caution. She knew that giving Boko Haram her public attention might increase their power. Wisely cool-headed, the First Lady had never made a major statement on foreign affairs before.

Her media team fretted about picking the right placard and marker pen for her to tweet #BringBackOurGirls. But she had recently met Malala Yousafzai, the Pakistani advocate for women’s education who was shot and nearly killed on her way home from a school exam in 2012. Malala’s commitment to outspoken resistance made Michelle Obama feel the cause was a moral issue, beyond the remit of ‘foreign policy’.

Boko Haram’s leader Abubakar Shekau, who began studying Islam in 1980, was the child of an imam and a peanut seller. Pictured: Screen grab released by Boko Haram

So she went ahead and tweeted. Her intentions were so good and her act so carefully weighed. But Parkinson and Hinshaw believe the social media spotlight made things worse for the kidnapped girls. They argue that the international attention triggered by the popular #BringBackOurGirls movement gave Boko Haram’s leader, Abubakar Shekau, the same spotlight that 9/11 gave Osama Bin Laden. And they say that the focus on those 276 girls overshone the murder, enslavement and enforced enlistment of thousands of less apparently ‘innocent’ victims of the Nigerian terrorists.

Many of us in the West have only a sketchy idea of who Shekau is. Indeed, even the global military elite have scant purchase on him. But Parkinson and Hinshaw give us a decent sketch of the man: the child of an imam and a peanut seller. Seeing their son was intellectually ‘brilliant’ but ‘troubled’, his parents sent him from the thatched roofed cottage he called home to study Islam in 1980, when he was just seven.

He quickly memorised the entire Quran, learning to speak Arabic, Hausa and English. But his quarrelsome nature worsened. By his teenage years he was committing to fundamentalists who preached that the world was flat and evaporation was a Western lie because only Allah could make rain.

By the time the Chibok girls met him, Shekau was capable of appearing reasonable, while expecting them to conform to his insane preaching. In 2015, Shekau pledged allegiance to Islamic State. 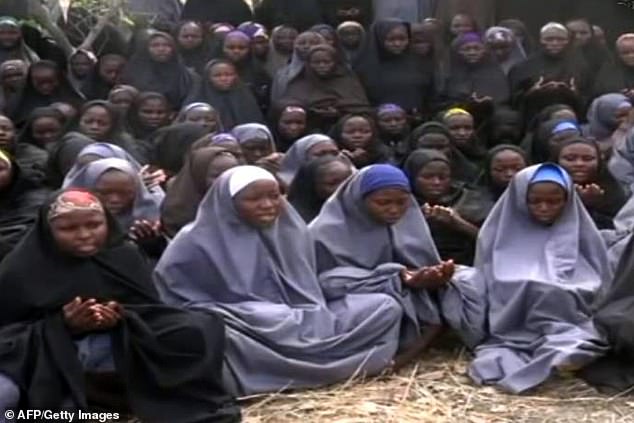 Girls who’ve escaped the kidnappers, claim they were kept in camps in remote areas. Pictured: A group of girls abducted by Boko Haram

Parkinson and Hinshaw offer a horrifying account of what it was like to live as a Boko Haram hostage through extensive interviews with the Chibok girls who’ve escaped. The girls were kept in camps, in remote areas and beneath trees which made them almost impossible to spot by the search planes and drones.

They describe the hunger pangs of starvation and the sensation of a rifle smacking into the flesh of their backs when they refused to convert to Islam and ‘marry’ a terrorist. They explain how they put their faith in journals and prayers breathed into cups of water they would sprinkle over the weakest among them as a blessing.

Although most of the hostages were Christians, some were Muslim and those girls had an equally traumatic time. We hear the heartbreaking tale of two sweet Muslim sisters who eventually agreed to ‘marry’ their captors and ended up living in the deserted homes of Nigerians who’d been killed or forced to flee by Boko Haram. Trapped in their homes all day, they waited in fear for their husbands to return and rape them.

Meantime, the international community was bickering about the best way to deploy billions of dollars of military technology. Drones scanned the terrain in vain. South African mercenaries blazed in, along with Swiss diplomats, local bloggers and CIA operatives.

A British spy plane sent in to search the region broke down and had to return to its base in Senegal. The Nigerian government shifted from the affable but ineffective hands of President Goodluck Jonathan to his replacement, Muhammadu Buhari, a hardline General, and still nothing happened. ‘Everybody thinks, Oh you’re the U.S., you can just fly some troopers in there and go in and rescue them,’ one American operative told Parkinson and Hinshaw. ‘It’s not that simple.’

Of the girls taken, 61 escaped. A small group of negotiators eventually secured the release of 103 girls. We don’t know what has happened to the rest. Some will have been killed in strikes on Boko Haram bases. Some are still held as hostages or have been killed by their captors. Others will be the wives of Boko Haram fighters and the mothers of their children.

Today, analysts say a failure to address the root causes of the insurgency explains why little progress has been made. The poverty and lack of education in Nigeria’s North East makes it easy for Boko Haram to recruit believers. The Nigerian military is ill-equipped and many claim corruption means money intended to fight terrorism has ended up in the pockets of officials.

This month, Buhari said instability caused by the pandemic has allowed the insurgents to claim even more hearts and minds. If the missing girls are still alive, it looks increasingly unlikely they will be home any time soon.