Inseparable: The two boys who drowned are pictured playing in their garden

The family of two Aboriginal brothers who drowned in a river after wandering from their backyard lost a third child in the same place several years ago.

Barak Austral, five, and Jhulio Sariago, three, went missing on Monday evening and were last seen on CCTV footage walking towards the Ross River in Townsville.

Their bodies were found in a deep section of the fast-flowing river just before 7am on Tuesday.

In an emotional press conference on the banks of the river last night, the boys’ family revealed memorial crosses would be placed at the spot where they died.

A family spokesman said three crosses will be set up because the family lost a seven-year-old relative in the same spot some years ago.

‘We lost another little relative who comes from a traditional owner group here and this family have asked if they could put a third cross up for the little darling we lost some years ago in exactly the same spot,’ said the family spokesman, Townsville Aboriginal academic and activist Gracelyn Smallwood.

‘Once these crosses are put up we’re going to ask the council if we could have three little memorial plaques and three trees planted there,’ she said.

Remembering the boys, Mrs Smallwood said: ‘They were happy little people like all three and five-year-old children. 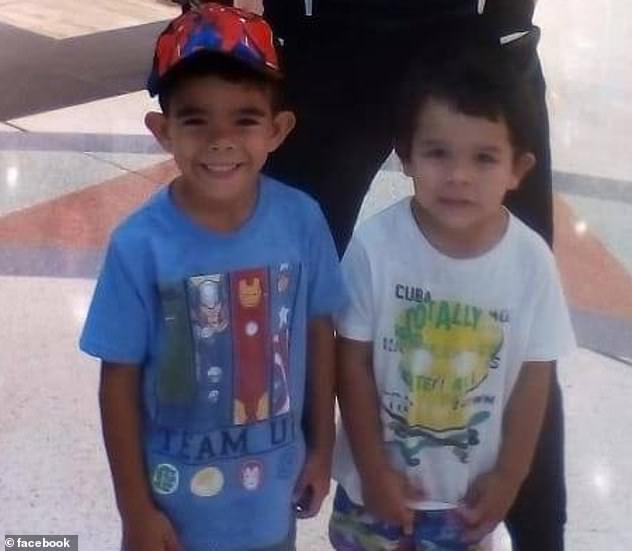 Tragic: Barak Austral (left), five, and Jhulio Sariago (right), three, were found dead in the Ross River near Cranbrook in Townsville just before 7am on Tuesday 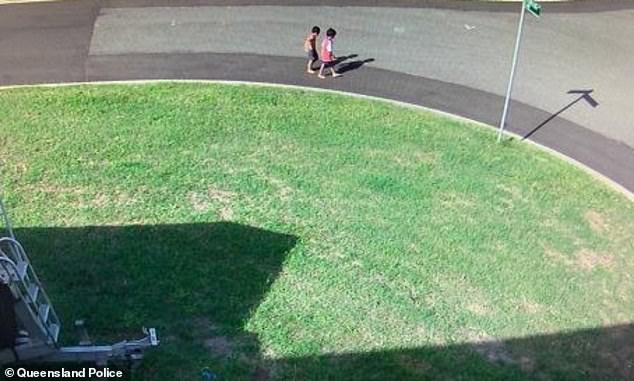 The boys were seen alive for the last time in CCTV footage, with Barak wearing his school uniform (in red shirt on the right) 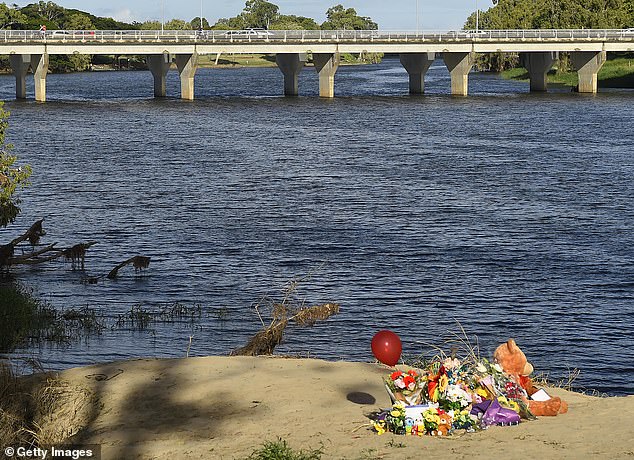 A family spokesman said three crosses will be set up by the river because the family lost a seven-year-old relative in the same spot some years ago. Pictured: Tributes at the scene

‘They’re fearless and that’s how they want to be remembered.’

Up to 100 policemen, rescuers and residents joined a frantic search for the boys after they went missing from their home in the suburb of Cranbrook about 5.45pm.

Their mother Leeann Eatts made a series of desperate posts to social media asking for help.

‘My two babies have been missing since 5.45. I got eight police cars at my house and everyone on foot looking for them please keep a close eye out for them on the streets… they just walked off. Please help Townsville.

When the bodies were found, the boys’ aunt Ros Eatts said: ‘Everyone’s in shock and total devastation. I’m totally gutted. Leeann, the mum, is inconsolable.’

‘Jhulio was so smart – he knew everything. He was a good kid, so loveable, lovely little face and beautiful nature… I’m going to miss them.

Senior Sergeant Ian Wilkie said a member of the public saw the boys swimming in the river and the deaths appeared to be the result of a ‘tragic accident’. 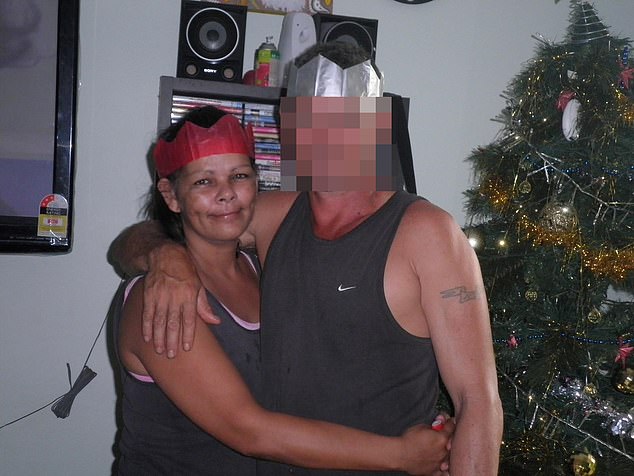 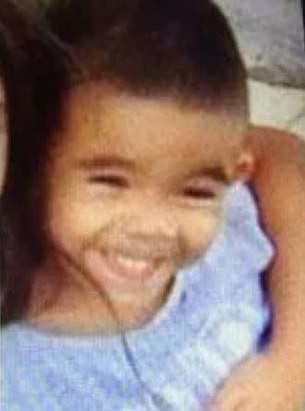 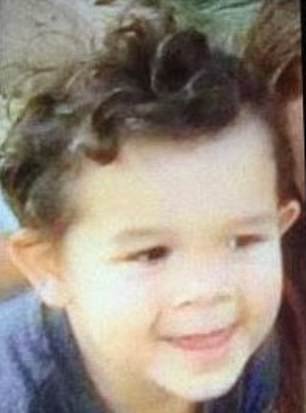 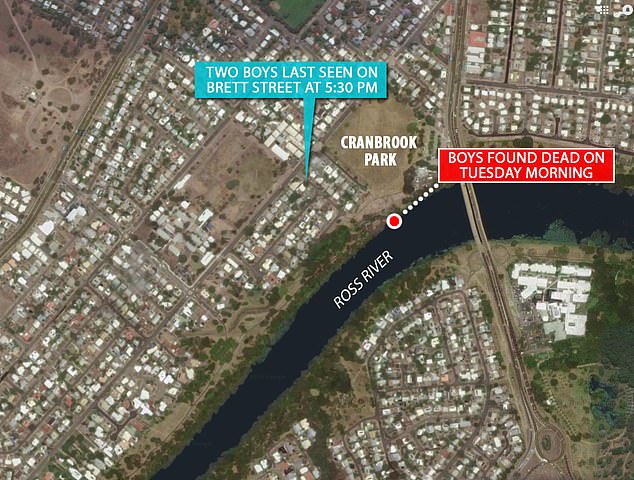 An amber alert was issued by police on Monday after the boys went missing from their home in the suburb of Cranbrook about 5.30pm

‘Where they’d been jumping in swimming, it’s quite deep and it’s got a steep bank and there are weeds and other debris in that area,’ he said.

‘They looked like they were having fun and it’s turned to tragedy. Our hearts and thoughts go out to the family.’

Senior Sergeant Wilkie said the boys were found next to each other, and the deaths have hit the community especially hard after the city was battered by floods.

The boys will be returned to Darwin where they are originally from.

A GoFund Me page to raise money for the family read: ‘The boys are from Darwin and I would love to be able to help bring them home with the support and love of our community so we can bring the boys home without putting the family behind.

‘Sending my love and prayers to the family and friends of our boys.’ 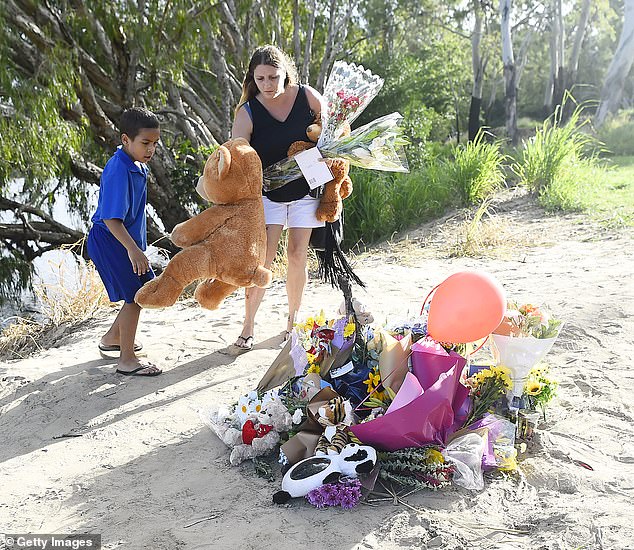 Senior Sergeant Ian Wilkie said a member of the public saw the boys swimming in the river. Pictured: Residents lay tributes at the scene 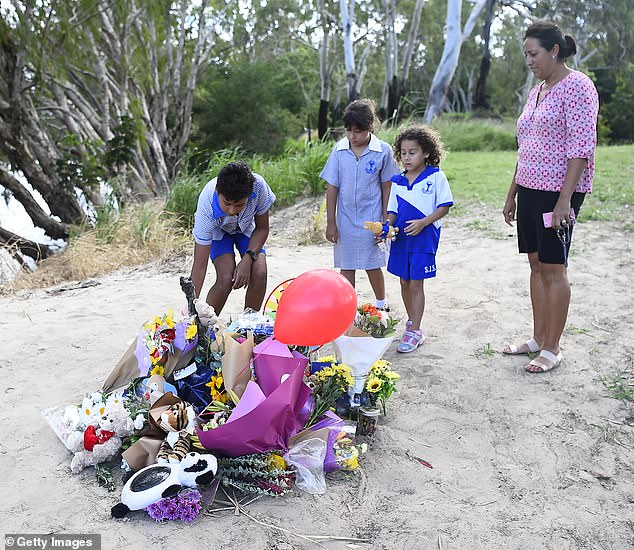 The boys will be returned to Darwin where they are originally from. Pictured: Residents lay tributes at the scene