The Shape Of Water, Dunkirk and Darkest Hour all received early nods as the announcements for Academy Awards Nominations 2018 were made in Los Angeles.

Tiffany Haddish and Andy Serkis made the announcement from the Academy’s Samuel Goldwyn Theater on Tuesday morning in Los Angeles, just under six weeks before the ceremony is due to take place.

Intriguing: Fantasy film The Shape Of Water has been praised for an original portrayal of a big screen love story

Considered one of the biggest and best-received films of the year, Darkest Hour is already the talk of awards season.

British lead actor Gary Oldman is also hotly tipped to win the Best Actor award for his portrayal of Churchill.

Meanwhile, Three Billboards Outside Ebbing, Missouri is said to be ‘steamrollering’ through awards season. 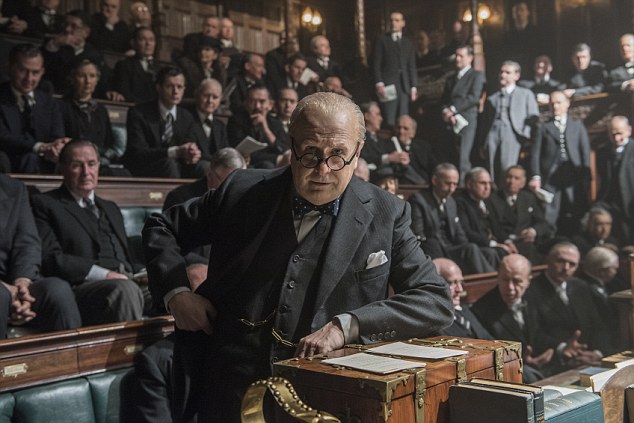 Cinematic brilliance: British wartime flick Darkest Hour, along with its lead actor Gary Oldman as Winston Churchill, has been tipped for great things

The film surrounds grieving mother Mildred Hayes (by actress Frances McDorman) who seeks justice for her daughter’s rape and murder.

Dissatisfied with the work of the local police department, enraged Mildred constructs three unmissable billboards on the road leading out of Ebbing, designed to ask the major questions about the lacklustre investigation.

Fantasy drama The Shape of Water has also been the subject of much awards season buzz.

Set in the 1950s, the film follows a strange and beautiful relationship between an amphibious creature and a local janitor.

Octavia Spencer (who plays Zelda Fuller) and Sally Hawkins (in the role of Elisa Esposito) are the standout stars from the production.

In 2017, Octavia became the first black actress to get a follow-up Oscar nomination after winning.

Biopic I, Tonya, which premiered in Sydney, Australia on Tuesday is the much-talked about skating film starring Margot Robbie.

Several films, and their stars have already experienced runaway success in the start to the 2018 awards season. 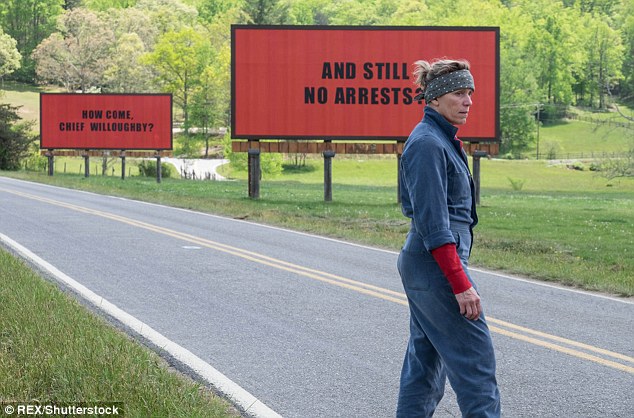 Still no arrests: Three Billboards Outside Of Ebbing, Missouri and, pictured, actress Frances McDormand have been tipped for Oscars glory all along 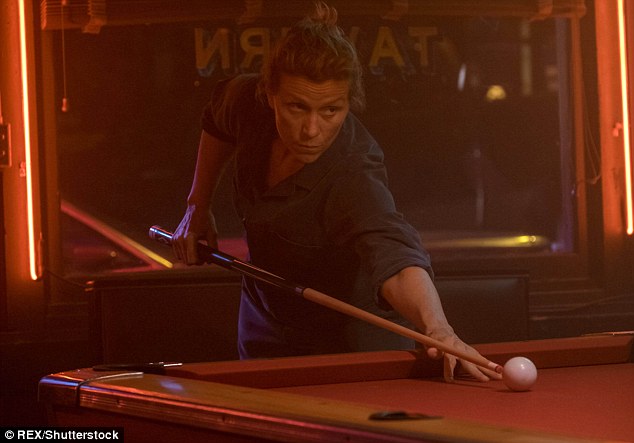 Oscars buzz: At the weekend, the film was the runaway winner of the Screen Actors Guild Awards

As well as taking the Outstanding Performance by a Cast in a Motion Picture, castmembers Sam Rockwell and Frances McDorman took the gongs for Male Actor in a Supporting Role and Female Actor in a Leading Role.

Before that, the Golden Globes once again highlighted the success of Three Billboards Outside Ebbing, Missouri, which won Best Motion Picture – Drama

So far, Darkest Hour actor Gary Oldman has won the Golden Globe award and the Screen Actors Guild for his role as Winston Churchill and is therefore hotly tipped for Oscars victory.

Controversially, James Franco won Best Performance by an Actor – Musical or Comedy for The Disaster Artist, yet his attendance at the Oscars has been called into question, after harassment claims lodged against him.

Similarly, Aziz Ansari – who earned Best Actor in a Musical or Comedy for his work in Master Of None – has since been named in a sexual harassment case.

As of this year, Hollywood producer Harvey Weinsetin is banned from the ceremony, after being dropped as a member of the Academy.

This is the second time that Jimmy Kimmel will return to host the ceremony for the second year in a row.