Accused rapist, 62, who allegedly abducted and sexually abused two teenage girls says he should be freed from jail because it’s bad for his mental health

An accused Melbourne rapist who says jail is bad for his mental health has refused psychiatric help while in custody, according to prosecutors.

Peter Michael Komiazyk wants bail after being charged with the abduction and rape of two young women during the 1980s, alongside Russell Street bomber Craig Minogue.

Komiazyk’s lawyer, Malcolm Thomas, says the 62-year-old’s physical and mental health is deteriorating in custody, where he is being held in isolation for his own safety.

Peter Michael Komiazyk, 62 (pictured), from Kalorama is seeking bail in the Melbourne Magistrates Court over 38 offences including abduction by force and aggravated rape

He wanted to see his own specialist outside prison instead and would not take medication, saying he was detoxing.

Minogue, who is already in prison and likely to die behind bars, is charged with the same offences.

Komiazyk was arrested in May and there was ‘overwhelming’ DNA evidence implicating him in the crimes, Detective Senior Constable Tony Benham told the court on Monday.

One of Komiazyk’s alleged victims has died but police fear for the other’s safety if the accused is released on bail.

His brother Richard Komiazyk teared up while telling magistrate Jelena Popovic why the 62-year-old should be released. 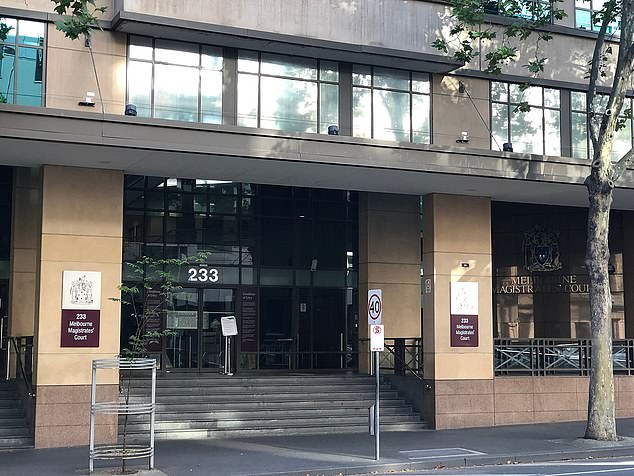 Melbourne Magistrates Court where the bail application is being heard. The case continues

Mr Komiazyk said his brother’s memory was deteriorating in custody and he had lost at least 20kg.

‘There’s nothing there,’ the brother, a secondary school teacher, tearfully told the court.

Prosecutors and Mr Thomas disagree about Komiazyk’s mental health, whether he had symptoms of post-traumatic stress disorder and the extent of his access to support services in custody.

Ms Popovic said in her experience ‘the provision of (mental health) services is woefully inadequate in prison’.

The bail application is continuing.