A black California businessman demanded $600,000 from California taxpayers during the first meeting of the state’s reparations task force on Wednesday.

Deliberations began on how to quantify how financial compensation might be calculated and what might be required to prove eligibility.

One of those who spoke at the public hearing was 35-year-old entrepreneur and the first black professional tri-athlete, Max Fennell who said that every person should get $350,000 in compensation to close the racial wealth gap and Black-owned businesses should receive $250,000, which would help them to flourish.

Fennell added: ‘It’s a debt that’s owed, we worked for free,’ he said. ‘We’re not asking; we’re telling you.’

Entrepreneur and professional triathlete Max Fennell spoke at the debate saying: ‘It’s a debt that’s owed, we worked for free,’ he said. ‘We’re not asking; we’re telling you.’

Fennell posted a video on Instagram showing him at the hearings, with around 60 others, alongside the caption: ‘Witnessing history with the tribe.’

Since 2021, the first of its kind in the nation task force has been delving into history and studies to make its case for reparations to California descendants of enslaved Black people.

‘The group has until July 1 before they have to make a decision on reparations. 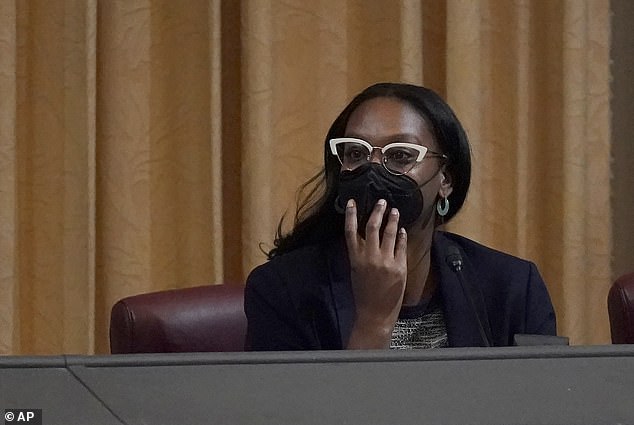 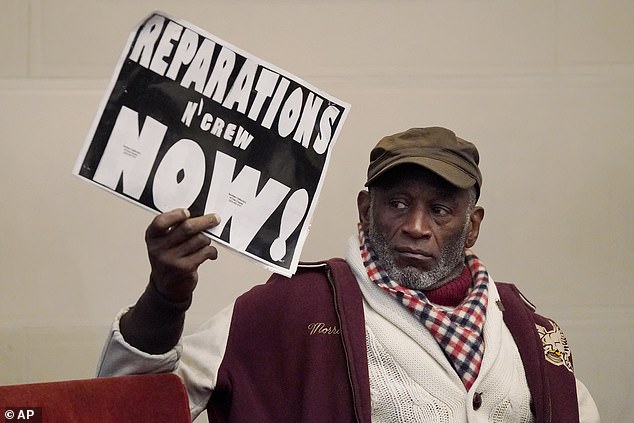 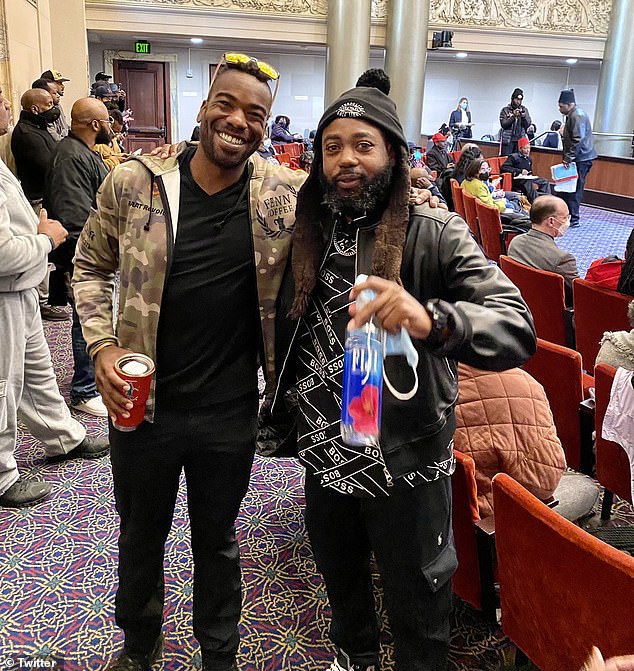 Max Fennell and fellow activist Deon Jenkins pictured after the meeting, Jenkins asked for reparations in the amount of $800,000 to be handed out

The committee met Wednesday at City Hall in Oakland, a city that was the birthplace of the Black Panthers but has lost some of its African American population as rising home prices forced people out.

California senate candidate Deon Jenkins spoke at the hearing and said that any money designed to counter-act housing discrimination should be in line with the average price of a home in the state, around $800,000.

While, Demnlus Johnson III, a Richmond City Council member, said it’s remarkable that the issue is even being talked about publicly.

‘You have to name a problem in order to address it,’ he said. ‘Of course we want to see it addressed now, the urgency is now, but just having it all aired out and put on the line is a major feat.’ 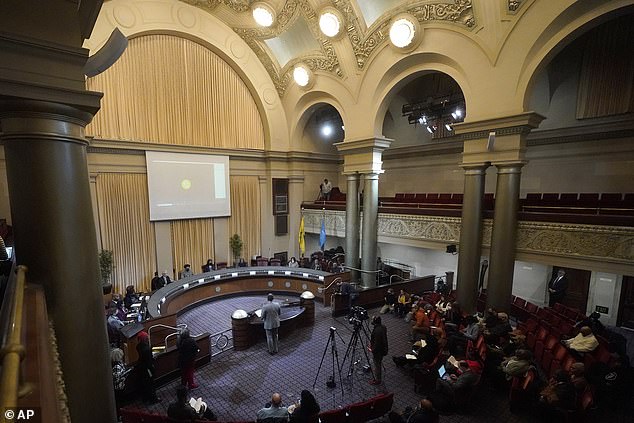 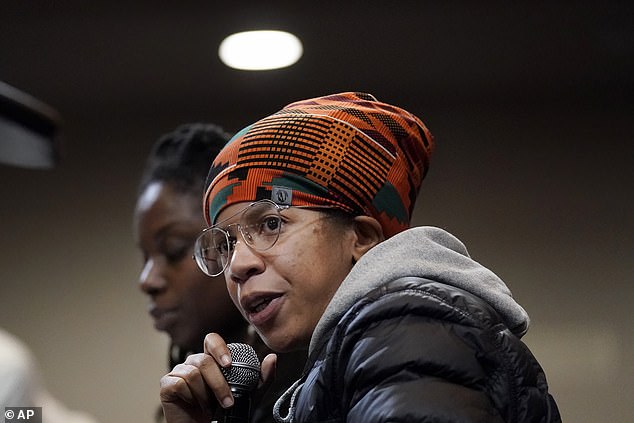 Kerby Lynch, foreground, and Patrice L. Taraji, both representing the city of Vallejo, Calif., speak during a witness panel for local municipal reparation efforts at a meeting by the Task Force to Study and Develop Reparation Proposals for African Americans 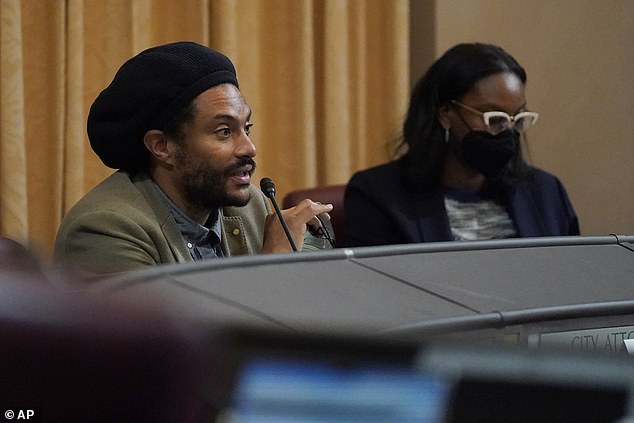 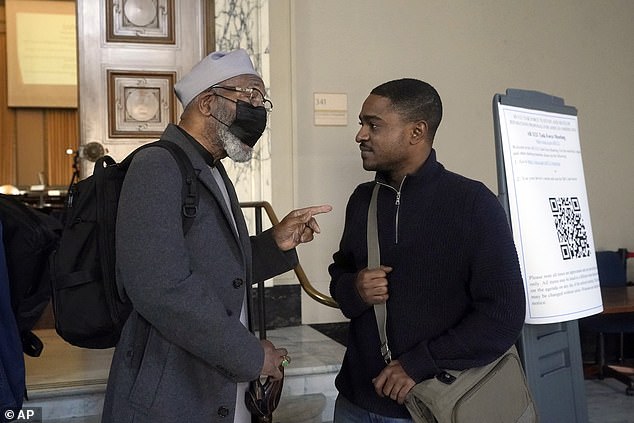 Sister Kamilah Moore, Chair of the California reparations Task Force, came on #BTP to clear up the misinformation surrounding the $233k number that the media falsely put out, and everybody that’s tryna be somebody just ran with pic.twitter.com/tAKHrT6Mgv

The day before the hearings began, the chair of the committee hit out at reports that the group plans to recommend that $225,000 will be handed out to each person applying for the program.

In a series of interviews on December 13, Kamilah V. Moore said that the figure presented to the committee by an economic research team represents the state of California’s ‘maximum culpability’ for housing discrimination.

It only applies to people who were impacted by housing discrimination between 1933 and 1977, and not just black people.

Moore said: ‘In reality, that number would be minimized when you take into account the fact that the task force decided in March that the community of eligibility would be lineage based rather than race based.’

She added: ‘When you really look at who was really impacted by housing discrimination during that particular time period it most likely won’t be all black folks.’ 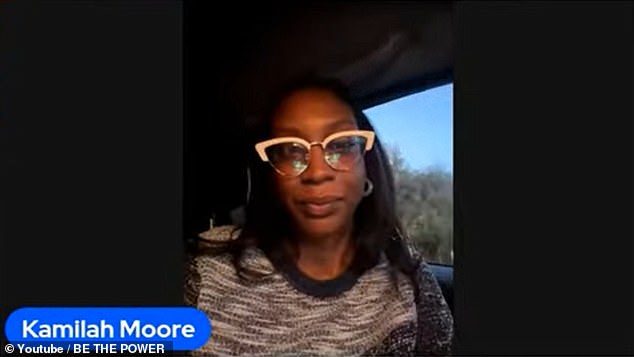 In a separate interview on Spectrum News, Moore pointed out the need for a Bureau of African American affairs in order to handle the payments, pointing to the success of the Bureau of Indian Affairs record of handling similar issues for Native Americans.

Moore opened the hearing on Wednesday by saying: ‘September’s meeting in L.A. and today’s meeting in Oakland, characterized a development stage. Now, we are not really looking for folks to provide personal and expert testimony.’

She continued: ‘It is important to get this right because we are setting the precedent for other states and localities, and also for the federal government as well.’

Councilmember Carroll Fife of Oakland pointed out the problems of homelessness in California. 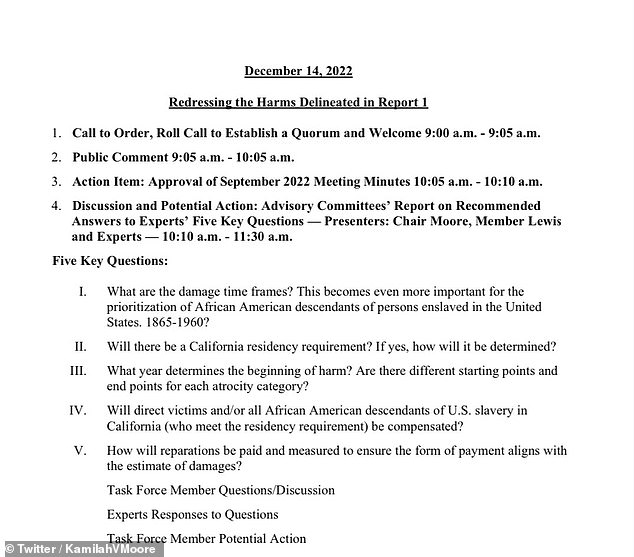 Fife said: ‘Homelessness is off the charts in California. And that’s part because there have been populations, particular black Americans, who have barred from access to housing.’

Members of the committee will make preliminary policy recommendations, such as audits of government agencies that deal with child welfare and incarceration with the aim of reducing disparities in how Black people are treated.

The group discussed how the state may address its impact on Black families whose property was seized through eminent domain. The topic garnered renewed attention after lawmakers last year voted to return a beachfront property known as Bruce’s Beach to descendants of the Black residents who owned it until it was taken in the 20th century.

That included Khansa T. Jones-Muhammad, vice-chair of Los Angeles’ Reparations Advisory Commission, created last year under then-Mayor Eric Garcetti. The goal of the commission is to advise the city on a pilot program for distributing reparations to a group of Black residents, but it doesn’t have a timeline set in stone for finishing its work.

In September, economists started listing preliminary estimates for what could be owed by the state as a result of discriminatory policies. But they said they need more data to come up with more complete figures.

California Secretary of State Shirley Weber, a former assemblywoman, authored the bill that created the state’s task force, and the group began its work last year.

The bill was signed into law in September 2020 after a summer of nationwide protests against racism and police brutality following the killing of George Floyd, a Black man, by a white police officer in Minnesota.

In June, the task force released a 500-page report describing discriminatory policies that drove housing segregation, criminal justice disparities and other realities that harmed Black Californians in the decades since the abolition of slavery.