NFL commissioner Roger Goodell met with a group of players recently to discuss protests during the national anthem, as well as a number of other social issues

Following a meeting with NFL commissioner Roger Goodell in August, four well-known NFL players sent a memo to the league, requesting that the month of November be dedicated to social activism and ‘Unity,’ as well as additional support for a series of charitable efforts aimed at making ‘communities stronger.’

‘Similarly to what the league already implements for breast cancer awareness, honoring military, etc, we would like November to serve as a month of Unity for individual teams to engage and impact the community in their market,’ read the memo.

The NFL has traditionally dedicated the month of October to breast cancer awareness, with players wearing pink socks and wristbands. A percentage of the sale of pink NFL merchandise is donated to a variety of cancer-related charities and fans are encouraged to donate as well. 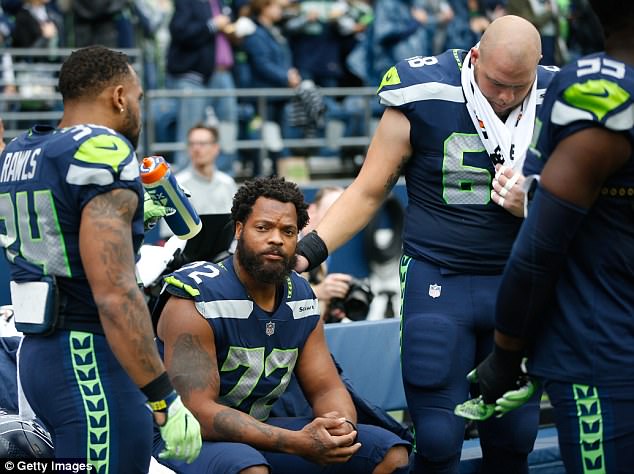 Bennett (no. 72)  has taken significant criticism for sitting during the national anthem before games, but the Pro Bowl defensive end does have supporters on his team and in the stands

Boldin, Jenkins, and Smith were among a small group of players that joined Goodell, Eagles owner Jeffrey Lurie, and Philadelphia Police Commissioner Richard Ross recently to discuss a number of issues, including the ongoing debate over activist NFL players sitting and kneeling during the national anthem. Now-former San Francisco 49ers quarterback Colin Kaepernick began the demonstrations during the 2016 preseason as a way to protest police violence against minorities.

The issue has become a divisive one around the entire NFL. Giants co-owner John Mara previously said that he had received extensive feedback from fans who objected to players taking a knee.

‘All my years being in the league,’ Mara told MMQB, ‘I never received more emotional mail from people than I did about that issue. “If any of your players ever do that, we are never coming to another Giants game”. It wasn’t one or two letters. It was a lot. It’s an emotional, emotional issue for a lot of people, moreso than any other issue I’ve run into.’

The NFL responded to the publication of the players’ memo on Thursday morning without saying whether or not the month of November will be dedicated to ‘Unity.’

‘Commissioner Goodell has been talking with players for some time about social justice issues and how to recognize the progress and the important work of our players in their communities across the country,’ read a statement from an NFL spokesman. ‘Malcolm invited the Commissioner to Philadelphia a couple weeks ago to see and share in what they’ve been doing to impact criminal justice reform. Joined by Mr. Lurie, the Commissioner spent the day along with Malcolm and others meeting with community leaders and representatives of law enforcement.’ 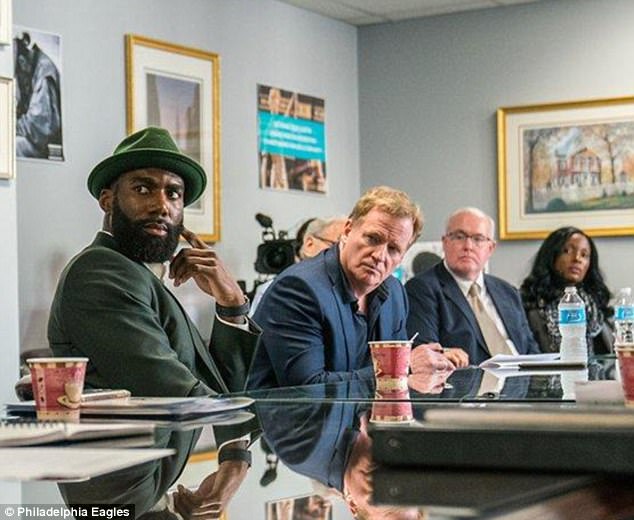 According to the statement, Goodell and the league ‘look forward to continuing to work with these players on these important issues.’

Included in the players’ addendum were the issues of bail reform, criminal justice reform, the criminalization of poverty, children being held in adult jails and prisons, reforming the war on drugs, excessive sentencing, clean slate legislation advocacy, and police accountability.

That last issue took center stage recently when Bennett accused the Las Vegas Metro Police of profiling him because of his race, wrongfully apprehending him, and ultimately threatening to shoot him.

Previously released videos have shown Bennett being handcuffed on the ground by LVMPD officers on August 27 as he pleads his innocence in the hours after the Floyd Mayweather Jr.-Conor McGregor fight.

The Pro Bowl defensive end announced earlier this month on Twitter that he is considering a civil rights lawsuit against the department. In a note addressed ‘Dear World,’ Bennett claimed police picked him out of a crowd that was running away from the sound of gunshots. Ultimately, he explained, those officers threatened to ‘blow my f****** head off.’ 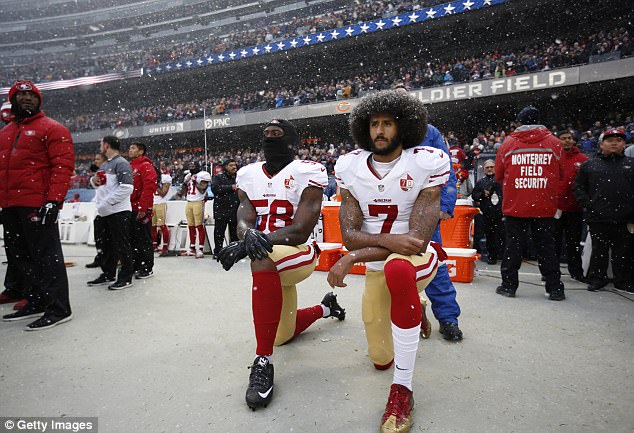 Now-former San Francisco 49ers QB Colin Kaepernick (right) started the protests last season, and even though he remains a free agent, the demonstrations have continued without him

The LVMPD is investigating the matter but has not admitted any wrongdoing.

‘I can tell you as I stand here today, I see no evidence that race played any role in this incident,’ undersheriff Kevin McMahill told reporters.

McMahill acknowledged that Bennett was not armed and confirmed that officers did indeed draw their weapons on Bennett.

The NFL previously announced it has no current plans to investigate Bennett’s behavior that night.

Boldin’s inclusion in the conversation is interesting because he no longer plays in the NFL. After a successful 14-year career the converted college quarterback signed a one-year deal with the Buffalo Bills before this season, but abruptly retired because he wanted ‘to make the larger fight for human rights a priority.’