Activists have removed a statue of Belgium’s King Leopold II in Brussels – days after another one was taken down in Antwerp due to anti-racism vandalism.

The figure was removed from its plinth during Thursday night, Belgian broadcaster RTBF reported, leaving an empty stand in the Auderghem neighbourhood on Friday. Photos show the separated bust on the floor nearby covered in red paint.

Leopold owned the Belgian Congo as his personal property from 1885 to 1908 and subjected its people to forced labour while he exploited the country’s rubber reserves – leading to millions of deaths in what some regard as a genocide.

Statues of the colonial-era monarch have become a focus of anger and debate in Belgium amid worldwide protests that followed the killing of black American George Floyd on May 25. 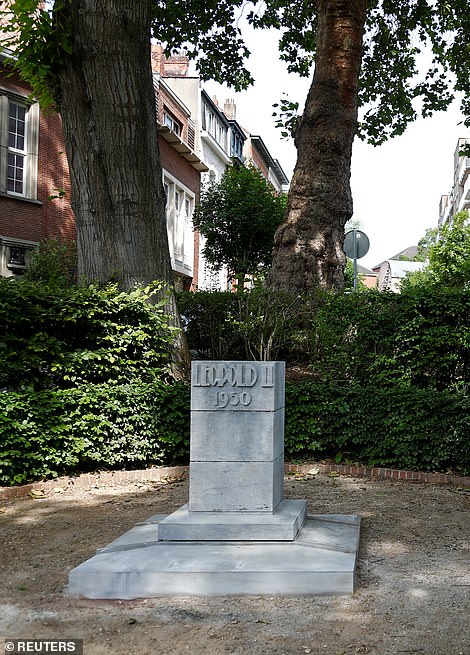 Activists have removed a statue (pictured left intact and after right) of Belgium’s King Leopold II in Brussels. The figure was taken down from its plinth during Thursday night, Belgian broadcaster RTBF reported, leaving an empty stand in the Auderghem neighbourhood on Friday 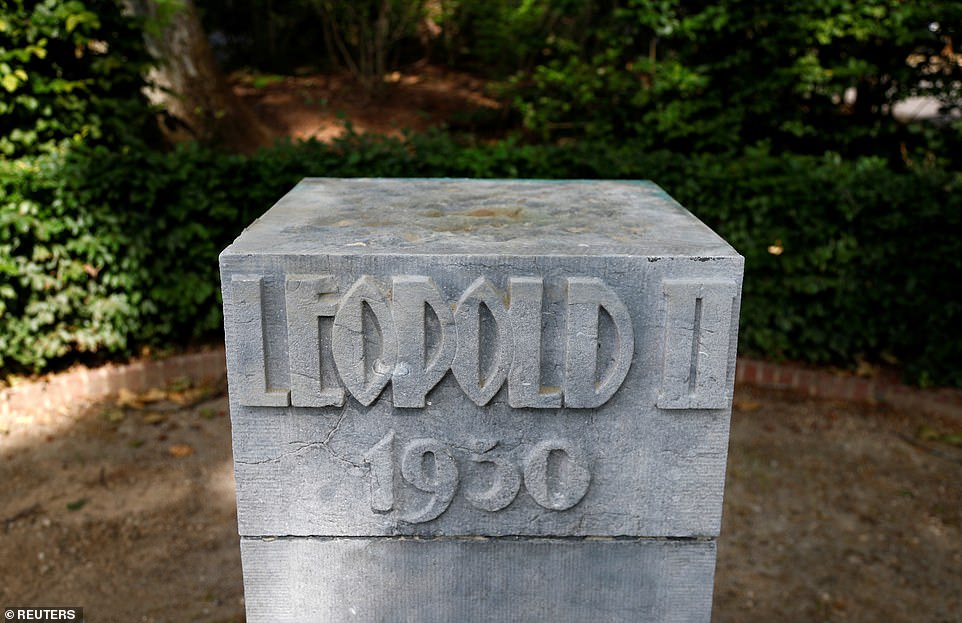 A plinth of a statue of former Belgian King Leopold II, a controversial figure in the history of Belgium, is pictured after the statue was removed in Brussels 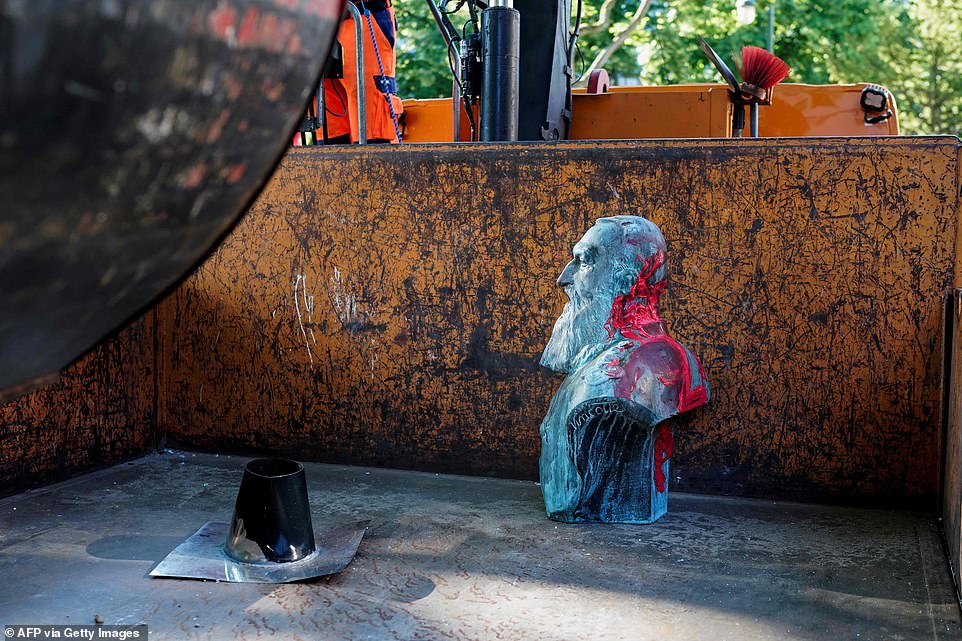 Photos show the separated bust on the floor nearby covered in red paint. It was removed by a city worker in the Auderghem neighbourhood 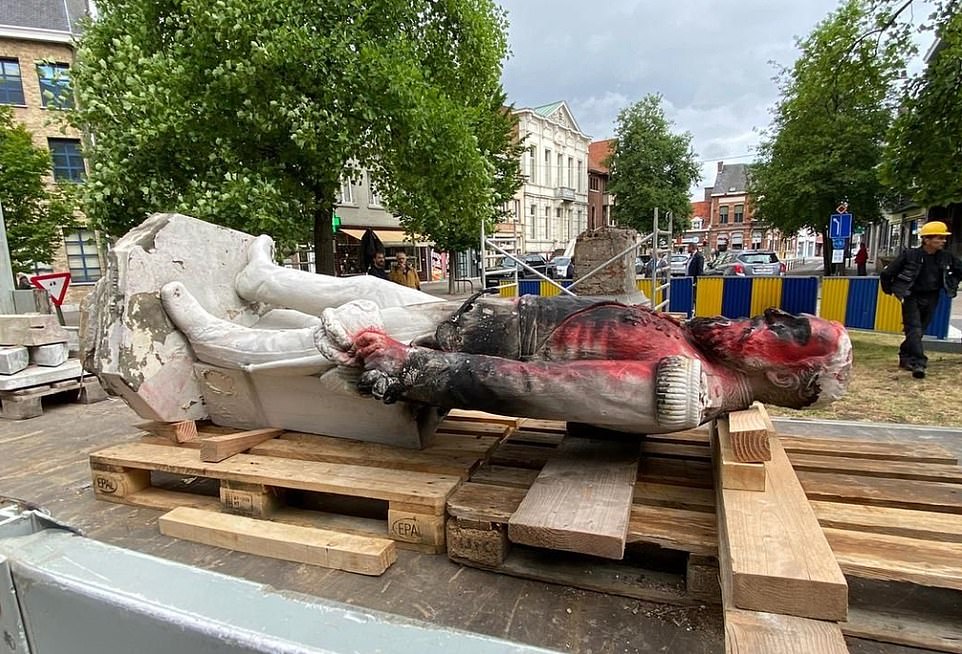 On Tuesday a statue of Leopold was taken down in Antwerp after it was vandalised by protesters. The mayor’s office said the statue was removed to be ‘restored’ after it was daubed with paint, but said it was unlikely to return to its public pedestal 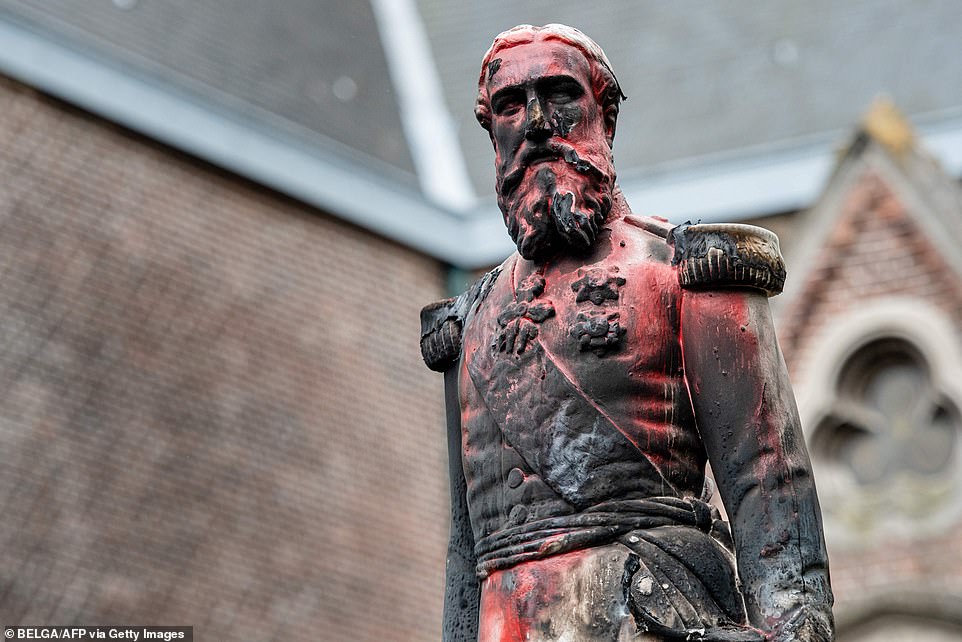 Demonstrators sprayed the words ‘killer’ and ‘thief’ on the statue of 17th-century admiral Piet Hein, who was linked to the slave trade. 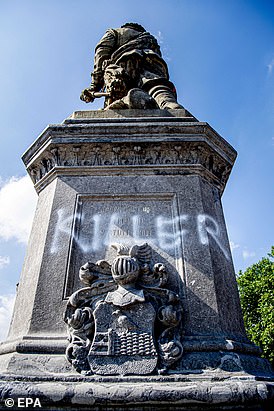 Phrases such as ‘No Racism’ were written around the statue of Fortuyn, whose assassination in 2002 changed the Netherlands’ liberal image into a unified and secure society.

Activist group ‘Heroes of Never’ claimed responsibility for the vandalism, stating they were condemning ‘the glorification of Dutch colonialism and the martyrdom of Pim Fortuyn’.

The protestors also defaced the arts centre named after Hein’s captain, Witte de With in the same city.

The Witte de With centre later has since announced it will be renamed.

A number of representations of Leopold II have been vandalised, with statues burnt and daubed in red paint.

On Tuesday a statue of Leopold was taken down in Antwerp after it was vandalised by protesters. The mayor’s office said the statue was removed to be ‘restored’ after it was daubed with paint, but said it was unlikely to return to its public pedestal.

Separately, a statue of King Baudouin – Belgium’s second-longest reigning monarch after Leopold II – was found smeared bright red in a park in front of Brussels’ Cathedral of St. Michael and St. Gudula on Friday. The word ‘reparation’ was painted on the back.

Gosuin said the municipality of Auderghem had a few days ago removed a sentence from a memorial that honoured ‘those who brought civilization to Congo’.

On Tuesday a spokesman for Antwerp mayor Bart de Wever said the city’s statue was ‘seriously vandalised last week’ and ‘needs to be restored’ by a sculpture museum.

‘Because of the renovation work planned for 2023 in the square in which it was placed, the statue will not be replaced. It will probably become part of the museum collection,’ he said.

A spokeswoman for the Middelheim Museum confirmed they had received the statue and said they would restore it before deciding what to do with it.

There had previously been separate calls to take down Leopold monuments in Brussels, where one of his busts was covered in red paint last week.

Leopold is honoured with several monuments after ruling Belgium from 1865 to 1909, the longest reign in the kingdom’s history.

But his exploitation of the Congo Free State is seen as brutal even by the standards of the time, with millions thought to have died under Leopold’s personal rule.

Leopold amassed a huge personal fortune while the Congolese were killed or savagely maimed working on his rubber plantations.

Locals who failed to produce enough rubber would have their hands chopped off or their women taken hostage until the target was met. Others were shot dead.

The plunder of resources also included ivory, copper and diamonds, while Leopold even imported some Congolese people to be put on show at a ‘human zoo’ in Belgium.

Other looted treasures were put on display at the Africa Museum in Brussels, which Leopold used as a ‘propaganda tool’ for his colonial project.

American writer Adam Hochschild claimed in his 1998 book King Leopold’s Ghost that the death toll from Leopold’s policies was as high as 10million Congolese.

In fiction, the Belgian Congo provided the backdrop for Heart of Darkness, Joseph Conrad’s classic novel on colonial exploitation.

The exploitation made Belgium a successful trading economy, but sparked an outcry which has been described as one of the world’s first major human rights campaigns. 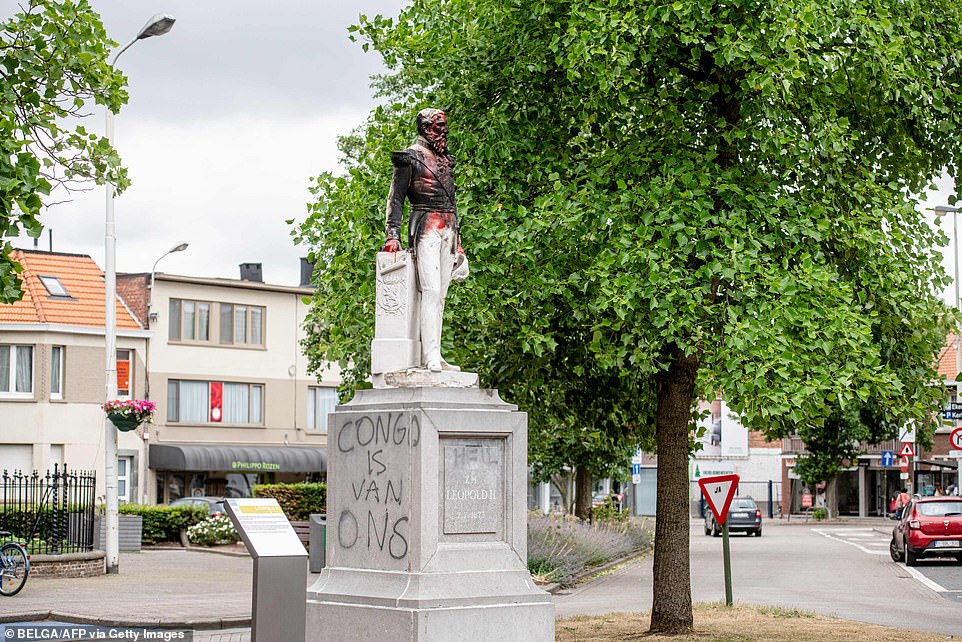 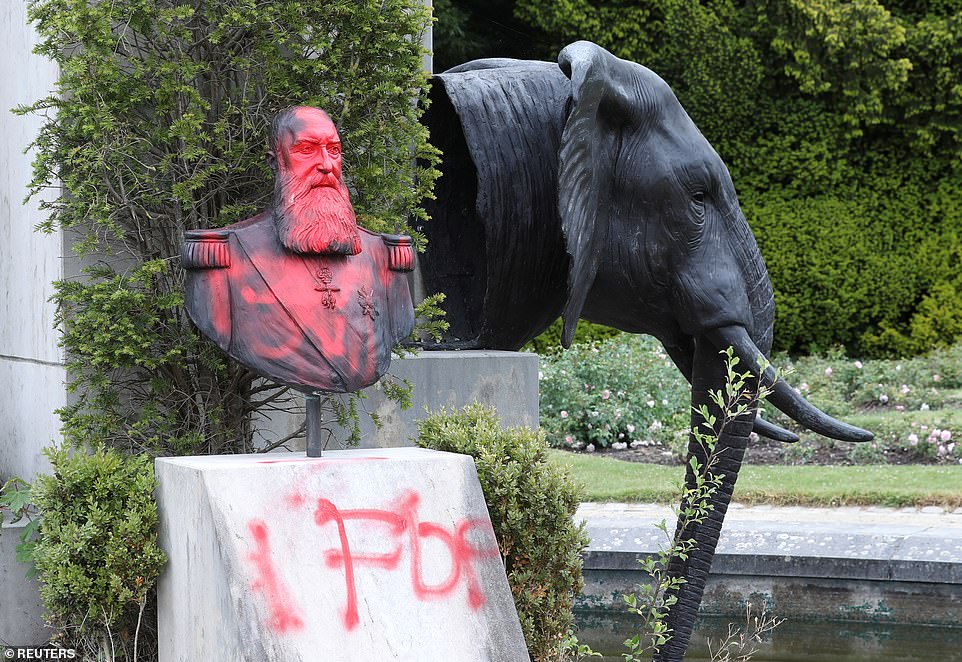 Another statue of former Belgian King Leopold II, this time in Tervuren near Brussels, is seen sprayed with a graffiti in the park of the Africa Museum, in a photograph taken on Tuesday 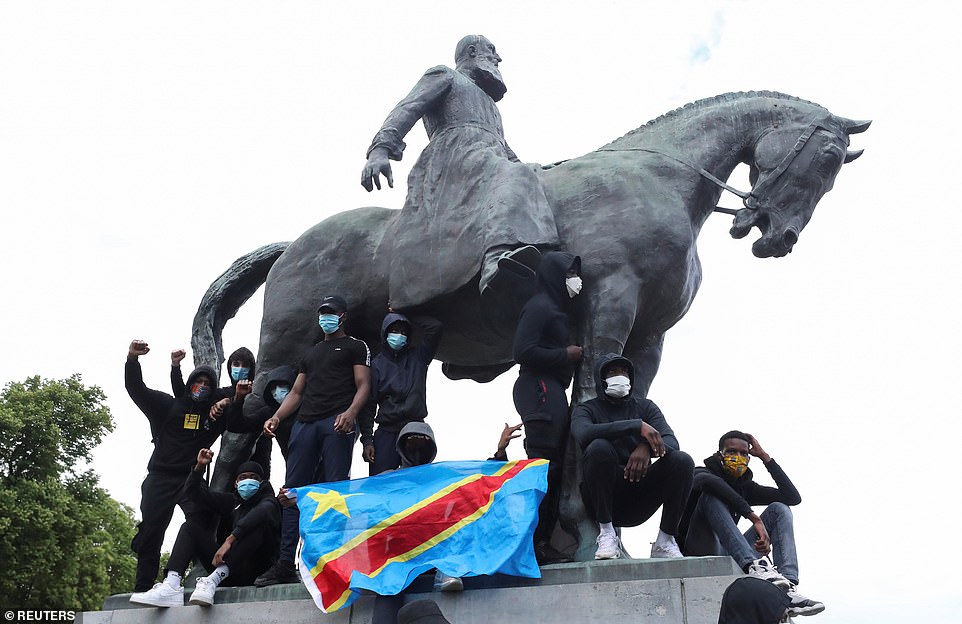 Another Leopold statue, this one in Brussels, was targeted by protesters waving the flag of the Democratic Republic of Congo on Sunday 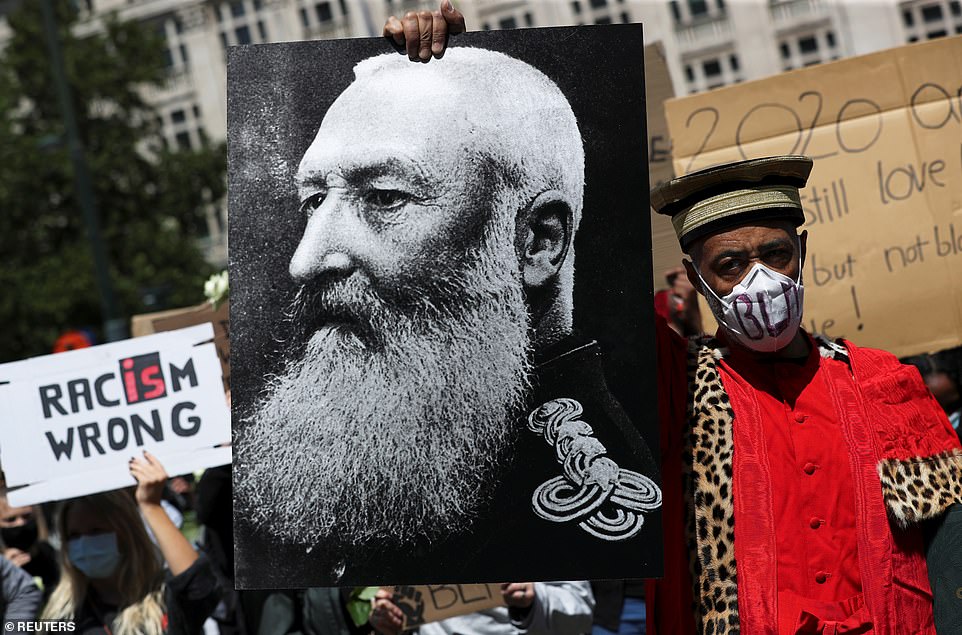 A protester holds a portrait of Belgian King Leopold II during a protest, organised by Black Lives Matter Belgium, against racial inequality in the aftermath of the death in Minneapolis police custody of George Floyd, in central Brussels, Belgium on Saturday

After the atrocities came to light, Leopold was eventually stripped of personal ownership of the Congo in 1908.

However, Congo did not become independent until 1960 and many Belgians remain uninformed about their country’s colonial past.

While the former king and some of his most notorious lieutenants are still honoured in street names and statues, protests have been growing over his legacy. 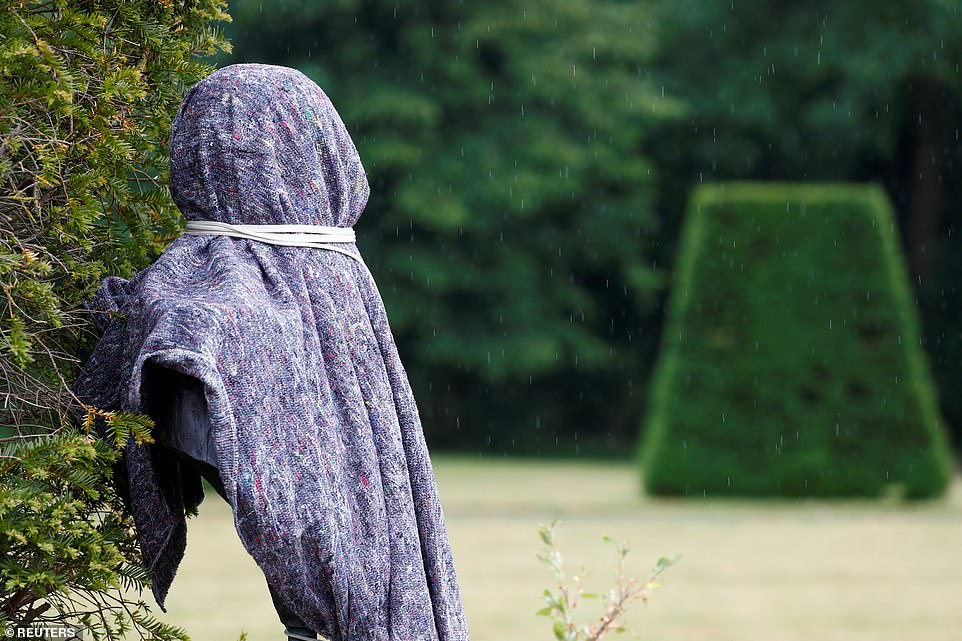 A sculpture of former Belgian King Leopold II is seen covered by a blanket after it was damaged in the park of the Africa Museum in Tervuren, near Brussels, Belgium last week 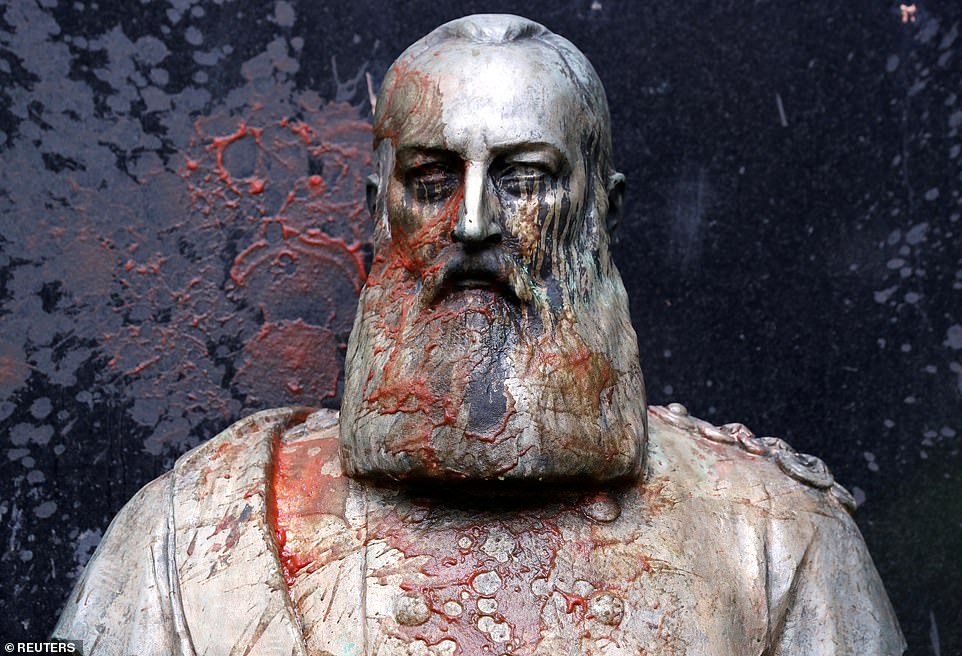 A statue of former Belgian King Leopold II, a controversial figure in the history of Belgium, stands in the city of Ghent. It was covered in a red liquid 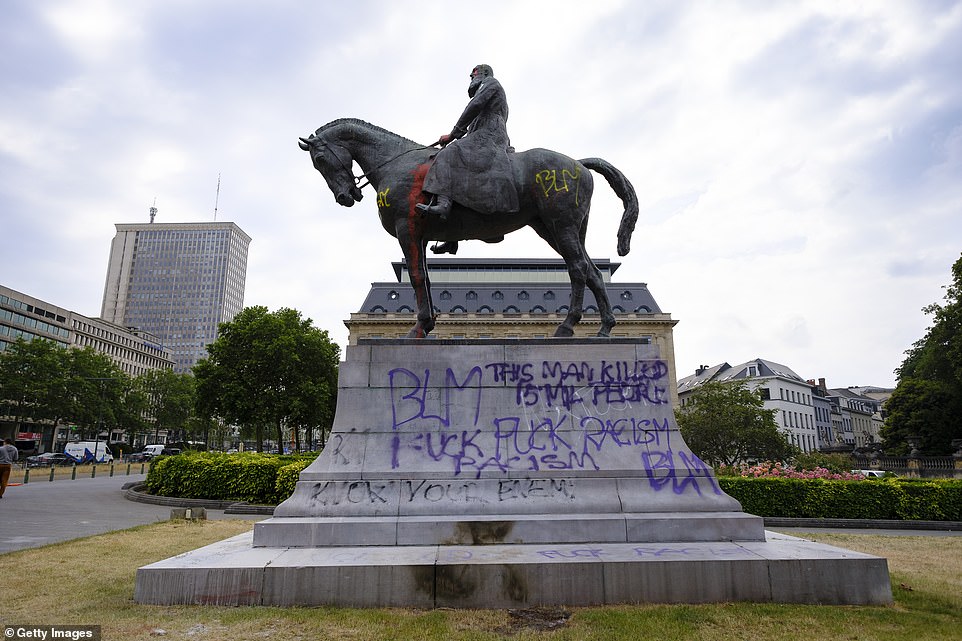 More than 64,000 people had signed a petition demanding that Brussels take down its Leopold II statues.

There have been numerous calls to strike down symbols of colonialism around the world as the Floyd protests enter their third week.

In Britain, a crowd of protesters tore down a statue of slave trader Edward Colston and threw it into a Bristol harbour on Sunday.

Statues of Confederate leaders who fought in defence of slavery have also been removed in the US, where they have long been a subject of controversy.