Javier Bardem criticized Donald Trump’s policy on immigration during the Oscar ceremony by declaring, ‘There are no borders or walls that can restrain ingenuity and talent.’

The Spanish actor was presenting the award for the Best Foreign Language Film with actress Angela Bassett when he began to speak in his native language.

He took a thinly-veiled swipe at Trump, whose tough stance on immigration and the building of a border wall on the U.S.-Mexico border have been a a hallmark of his 2016 election campaign and his presidency. 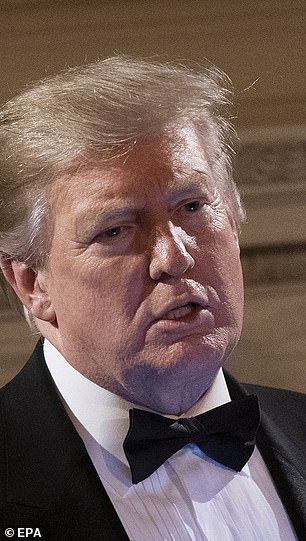 Javier Bardem (left) appeared to criticize Donald Trump (right) and his policy on immigration during the Oscars by stating, ‘There are no borders or walls that can restrain ingenuity’ 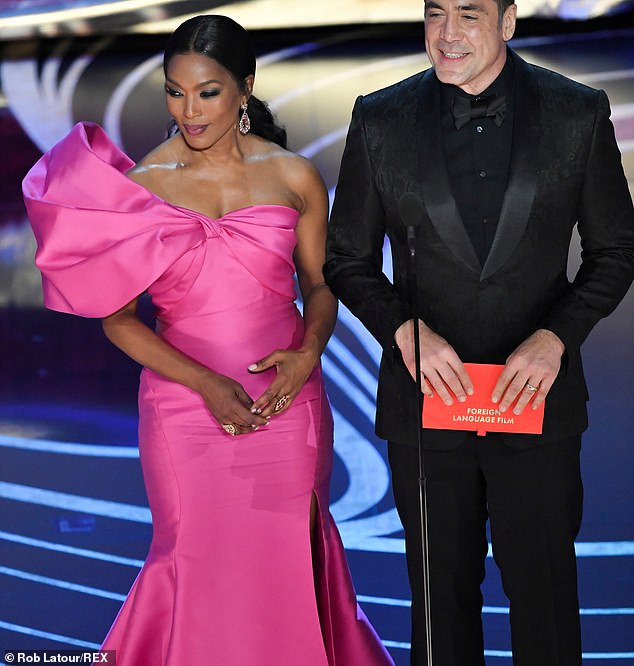 ‘In any region of any country of any continent, there are always great stories that move us.

‘And tonight we celebrate the excellence and importance of the cultures and languages of different countries,’ the 49-year-old James Bond actor said.

‘Claro que si!’ Bassett replied, which translates to ‘of course!’

The Oscar for Best Foreign Film went to Alfonso Cuaron’s “Roma,” which was the director’s tribute to his childhood growing up in Mexico City, Mexico.

His remarks weren’t the only criticism of Trump’s infamous wall during the Oscars telecast.

Taking to the stage after a performance by Queen, Maya Rudolph joked: ‘Just a quick update… in case you’re confused, there is no host tonight, no popular Oscar category and Mexico is not paying for the wall.’

Mr Trump said earlier this month that Mexico border wall ‘will be built anyway’ after lawmakers agreed a tentative agreement that only provides a quarter of the funding he has demanded. 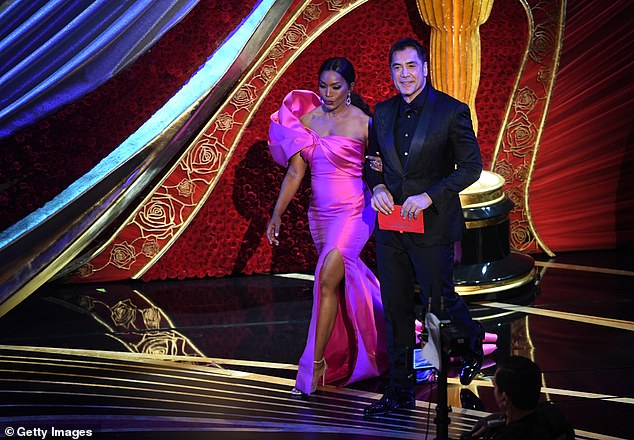 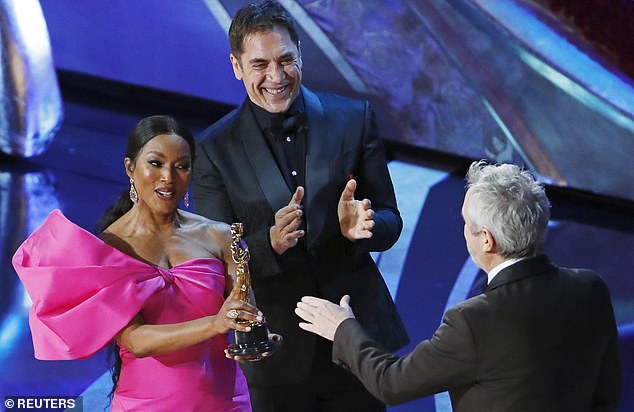 The actors are seen presenting an award to Alfonso Cuaron (right) for his movie “Roma,” which was the director’s tribute to his childhood growing up in Mexico City, Mexico

Mr Trump said earlier this month that Mexico border wall ‘will be built anyway’ after lawmakers agreed a tentative agreement that only provides a quarter of the funding he has demanded.

The deal struck between Democrats and Republicans to ease the threat of a second crippling government shutdown includes $1.4 billion (£1.09 billion) for the wall. 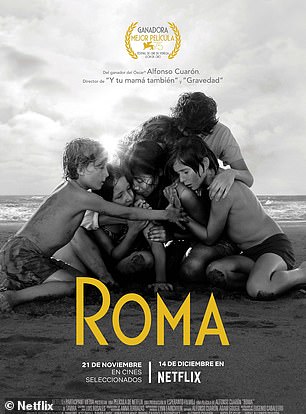 Roma was poised for Academy Award success after securing an impressive ten nominations including nods in the Best Picture, Best Director and Best Actress categories.

Roma made history as the first Netflix original movie to be recognized in the Best Picture category.

Earlier this month, Trump announced a national emergency to allow him to spend $8 billion building his wall after signing a bill to avoid a government shutdown after bitter standoff with Congress.

On Friday Trump warned Democrats in Congress on Friday that he will issue his first legislative veto if a joint resolution to block last week’s emergency declaration reaches his desk.

House Democrats introduced a resolution hours earlier to block the move, which the president took as a means of funding his long-sought wall along the U.S-Mexico border.

Asked during an Oval Office trade meeting with Chinese officials whether he was ready to uncap his veto pen, Trump didn’t hesitate. 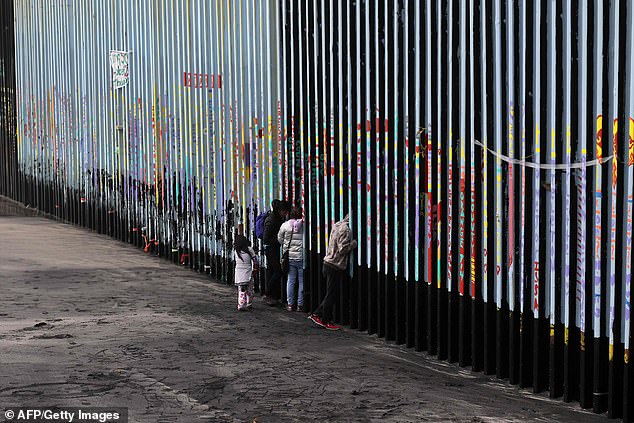 A family of Central American migrants (pictured) look through the US-Mexico border fence, as seen from Playas de Tijuana, in Baja California state on January 16 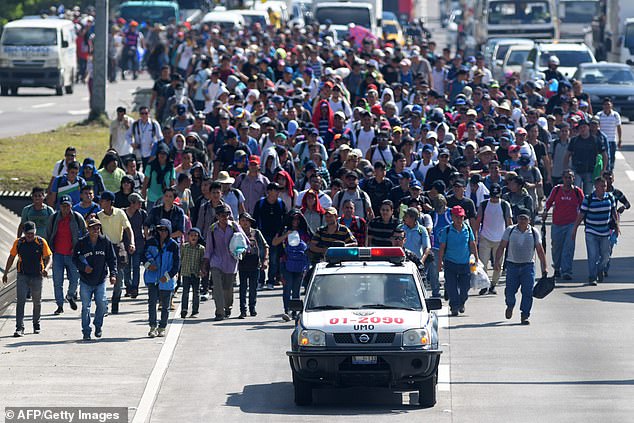 Salvadoran migrants embark on a journey in caravan towards the U.S. – Mexico border on October 31 seeking asylum 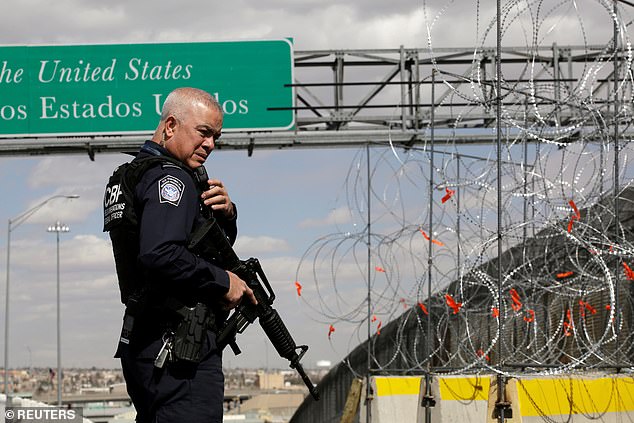 A U.S. Border and Customs and Border Protection (CBP) official stands next a concrete K-rail with concertina wire at Cordova-Americas bridge to enhance security efforts

The upcoming battle will test Republican support for the national-emergency move, which even some of his allies view as a stretch and a slap at lawmakers’ control over the power of the federal purse.

That measure represented a rejection of Trump’s demand for $5.7 billion to construct more than 200 miles.