While the world watched in horror on Thursday as war ripped through Ukraine, American actor Sean Penn was meeting with the country’s president and attending government press briefings for part of a VICE documentary he is filming.

Drama-chasing Penn, 61, – who found himself in the cartel’s firing line in 2016 after getting in touch with fugitive drug lord El Chapo –  sat with his sunglasses on for the press briefing at the Ukrainian government offices on Thursday evening.

He then met with President Volodymyr Zelensky, who posted a video of their meeting on his Instagram account. Their conversation was muted but Zelensky wrote in a caption: ‘The more people know about the war in the Ukraine, the higher the likelihood of stopping Russia!’

Penn has been filming a documentary about escalating tensions in the region for months. He flew back to Kyiv earlier this week, before Putin invaded the country, but does not appear to be in any rush to leave.

The documentary is a VICE Studios production, ‘in association with VICE World News and Endeavor Content’, according to a spokesman for the media company.

In a translated Facebook post, the Ukrainian government said it was grateful for Penn being there. He was lauded as being more courageous than Western leaders.

‘An American actor and filmmaker, Oscar winner Sean Penn arrived to Ukraine. The director specially came to Kyiv to record all the events that are currently happening in Ukraine and to tell the world the truth about Russia’s invasion of our country.

‘Sean Penn is among those who support Ukraine in Ukraine today. Our country is grateful to him for such a show of courage and honesty.

Ukrainian President Volodymyr Zelensky meets with Sean Penn on Thursday as war rips through Ukraine. Penn is filming a documentary for VICE. He posted beneath it: ‘The more people know about the war in the Ukraine, the higher the likelihood of stopping Russia!’. Zelensky is a former actor and comedian himself 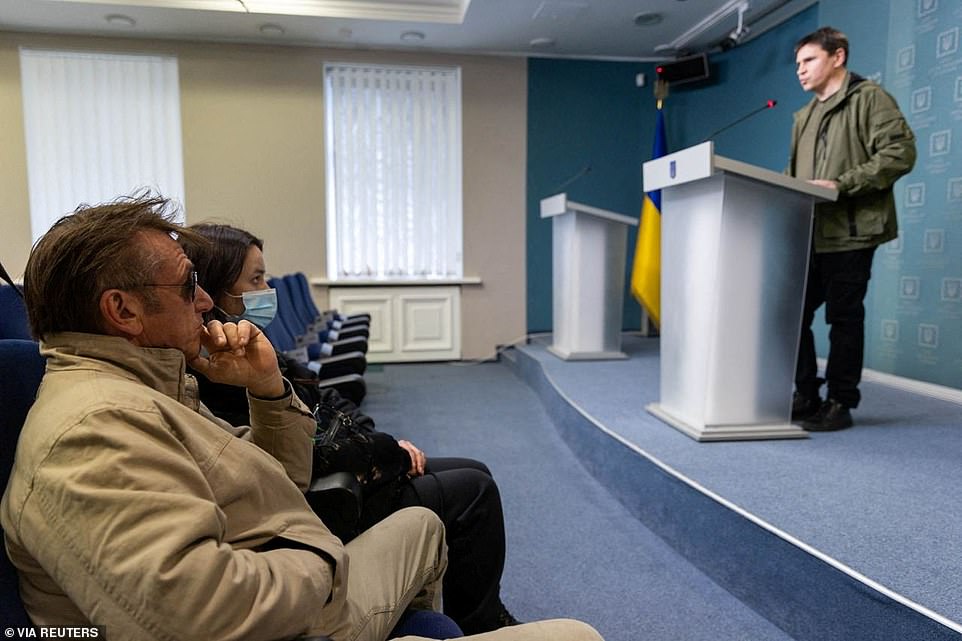 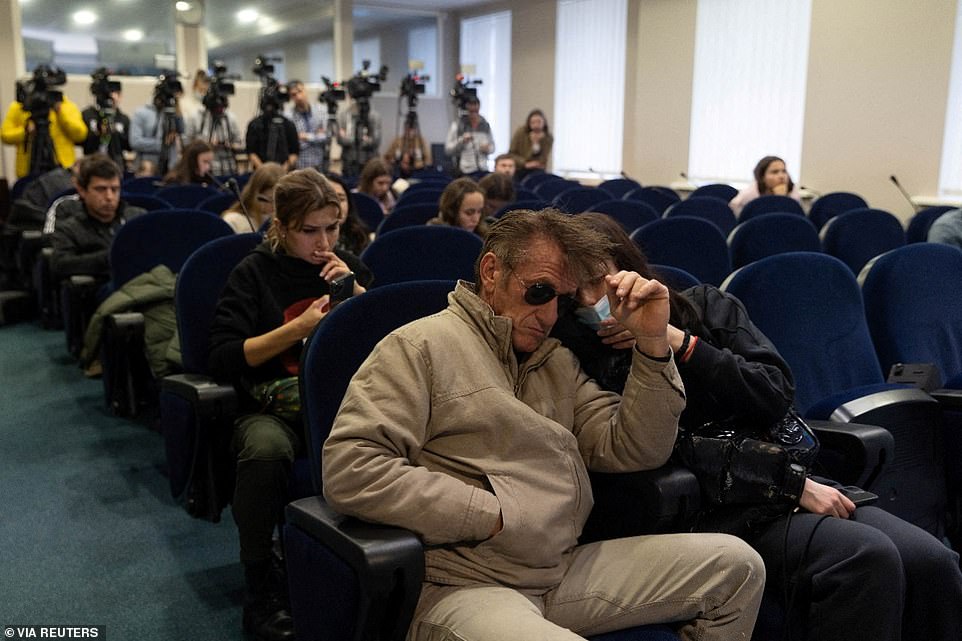 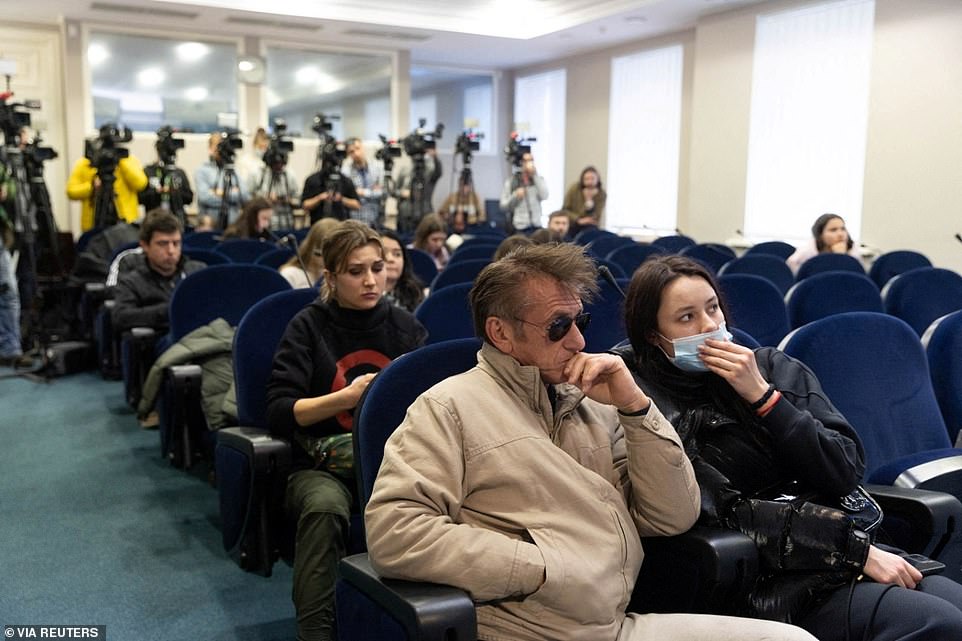 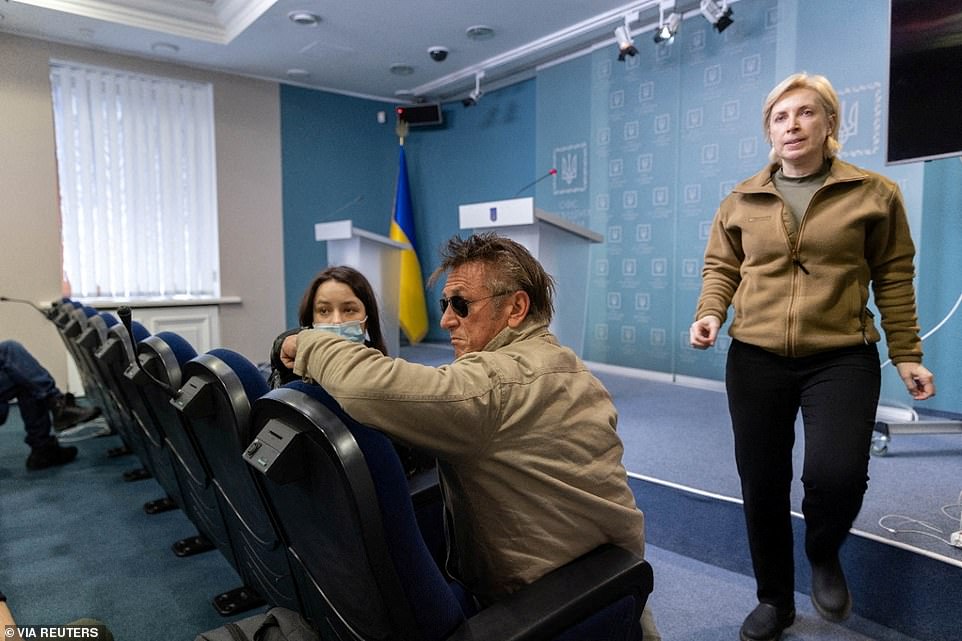 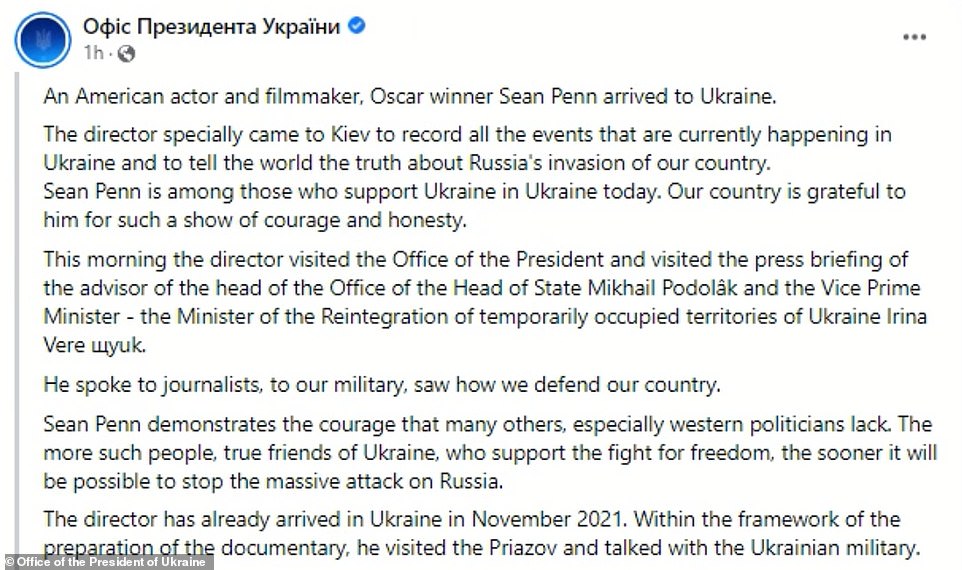 In a translated Facebook post, the Ukrainian government said it was grateful for him being there. He was lauded as being more courageous than Western leaders. 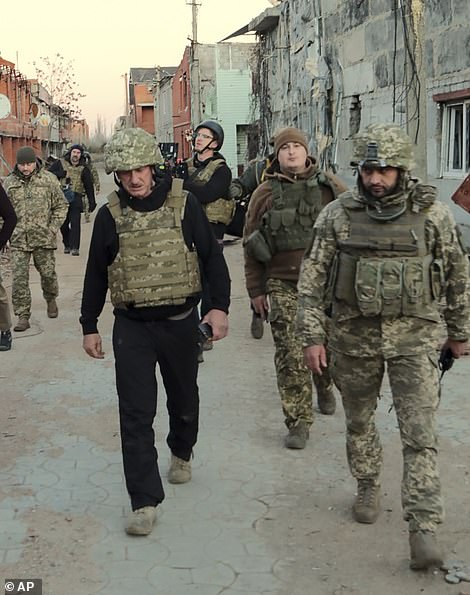 Penn has been in the region since November last year, flying back and forth, to document the escalating tensions for VICE 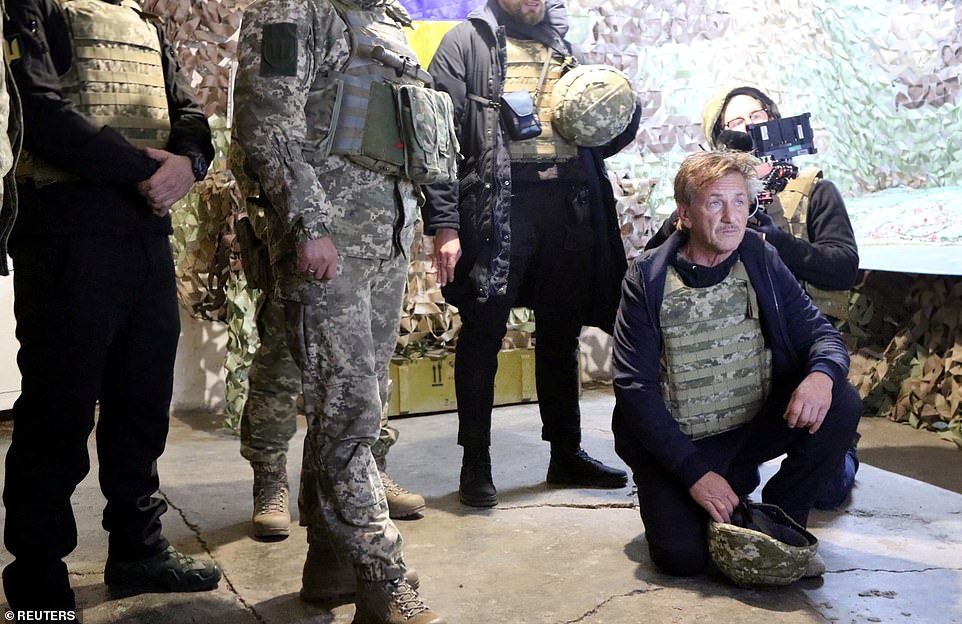 ‘He spoke to journalists, to our military, saw how we defend our country.

‘Sean Penn demonstrates the courage that many others, especially western politicians lack.’

‘The more such people, true friends of Ukraine, who support the fight for freedom, the sooner it will be possible to stop the massive attack on Russia,’ a statement on the Ukrainian government’s Facebook page read.

Earlier in the week, he was spotted out at dinners in Kyiv with other journalists.

Penn is settling in while thousands of others try desperately to flee the country.

Thousands of Ukrainians took shelter in underground subway stations to hide from the chaos while Americans stranded there boarded buses to flee to Poland or Romania. 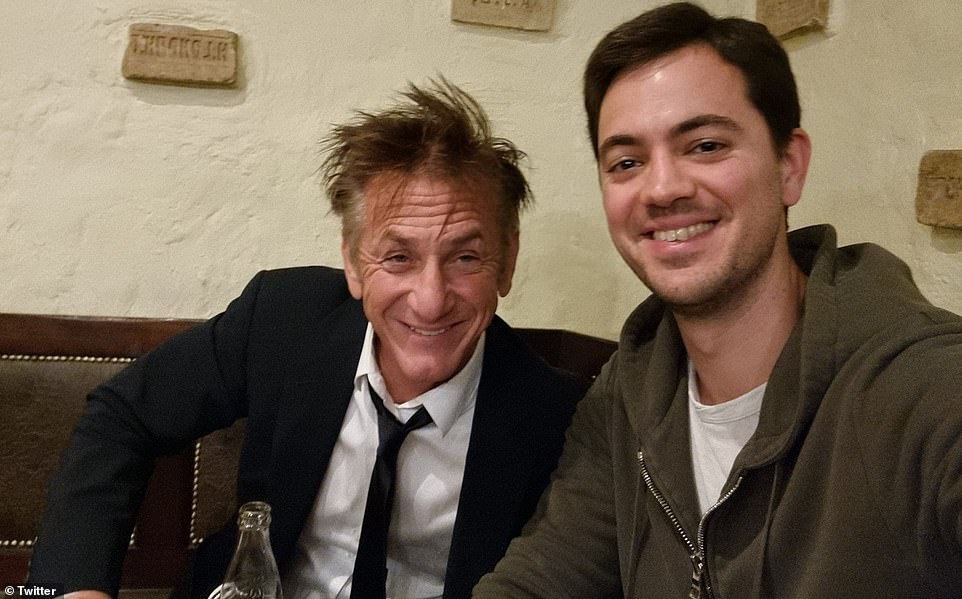 Penn with Ukrainian Presidential Adviser Alexander Rodnyansky in Kyiv on Tuesday night, a day before the first bombs were dropped 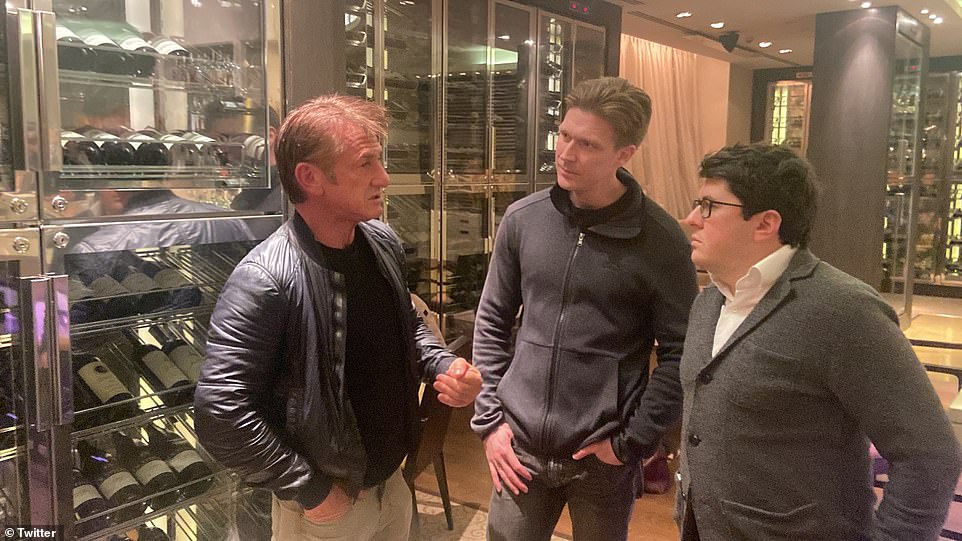 Penn prides himself for his journalism and activism. 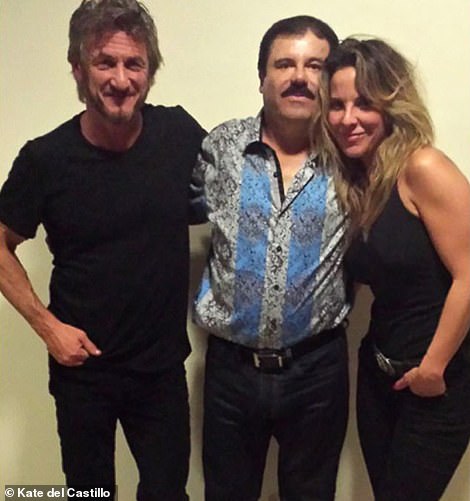 Taste for danger: Penn with El Chapo and Mexican actress Kate del Castillo in 2015, after El Chapo had broken out of prison

He previously filmed his efforts in Haiti for a documentary called Citizen Penn, after a devastating earthquake shook the nation.

In 2016, he found himself caught up in the US investigation into fugitive drug lord El Chapo, after he made contact with him while working on a Rolling Stone article.

Mexican actress Kate del Castillo arranged for the men to meet, and later said she felt used by Penn.

She persuaded El Chapo to meet with Penn in 2015, after he had broken out of prison.

During the clandestine meeting, Penn sprang on her to ask Guzman if he could interview him for Rolling Stone.

‘Suddenly, Sean starts saying, ‘Tell him that I want to interview him for Rolling Stone magazine,’” Del Castillo told Gloria, Lili and Emily Estefan. “I was just like, ‘Wait, this was not on the script.’ … I cannot do a face because [Guzman is] gonna notice that something’s wrong.

‘He’s gonna pick up on it, and [Penn is] gonna be dead in just a blink of my eye,’ she said in an interview with The Los Angeles Times later.

There was speculation that the pair’s pursuit of El Chapo, whose real name is Joaquin Guzman, led to US authorities tracking him down and re-arresting him.