A Texas car salesman is suing his former boss for alleged abuse that includes purposefully farting in his office and pinching male staff’s nipples.

Brett Bland claims that he suffered more than a year of a ‘sexually hostile environment’ at work and on social media at the hands of his former boss Jeremy Pratt.

Both men worked at the AutoNation Acura Gulf Freeway in League City, Texas, until Pratt was fired for sending a flyer around the dealership claiming Bland was a sex offender, which he is not.

In Bland’s lawsuit, he claims management turned a blind eye to Pratt’s locker room-like antics while he ‘reinforced dominance over his subordinates by regularly entering their enclosed offices, intentionally passing gas, and then laughing as they were forced to breathe soiled air.’

Brett Bland claims that Pratt would fart in his office and pinch his nipples while working for him at the AutoNation Acura Gulf Freeway in League City, Texas (pictured)

Court documents obtained by Click 2 Houston say Pratt warned his employees not to complain to Human Resources because he claimed to have the HR director ‘wrapped around his finger’ and therefore would not punish the bad behavior.

However, Pratt was finally fired after sending a picture of Bland in a group message to 10 employees that said ‘keep your children safe’ and ‘you are receiving this because there may be a risk of sex offender activity in your area’.

The message showed Bland’s photo next to a picture of a young girl insinuating that she was a victim or potential victim of Bland’s, according to the lawsuit.

Bland is not a sex offender and has no such criminal history.

Once Pratt was fired, Bland claims he faced retaliation by the company when they enacted a new policy called the ‘8 or the gate’.

The new policy meant that Bland needed to sell eight cars per month or he would be fired.

Bland said that even after his former boss was fired, he would loiter around the dealership and taunt him with text messages.

Court documents do not give an exact amount that Bland is seeking, but lists court costs and damages as reparation.

AutoNation has releases a statement in response to the allegations.

‘This is a pending legal matter on which we have no comment, other than to say that we previously investigated the matter several months ago and took appropriate action,’ the statement reads. 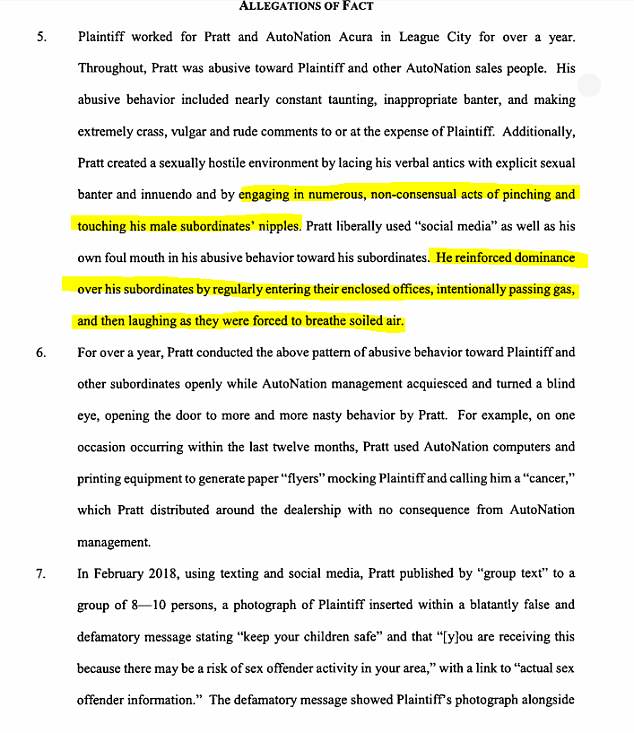