Adam Lallana on his fresh start, battling ulcerative collitis and his love of Mauricio Pochettino

When Glenn Murray left Brighton last week, Adam Lallana became not just the newest player at the club but also the oldest, and something about that feels strange.

He is only 32, for a start, and looks younger. Also, it does not seem long since he was weaving his way through the Southampton midfield, among the first of a breed of young midfield players to benefit from the teachings of Mauricio Pochettino.

Yet here he is now, back on the south coast as a senior pro following his free transfer from Liverpool. Ready to talk to younger players, ready to forge a bond with his manager Graham Potter similar to those he had with Pochettino, Brendan Rodgers and Jurgen Klopp. More importantly, Lallana is ready to play. 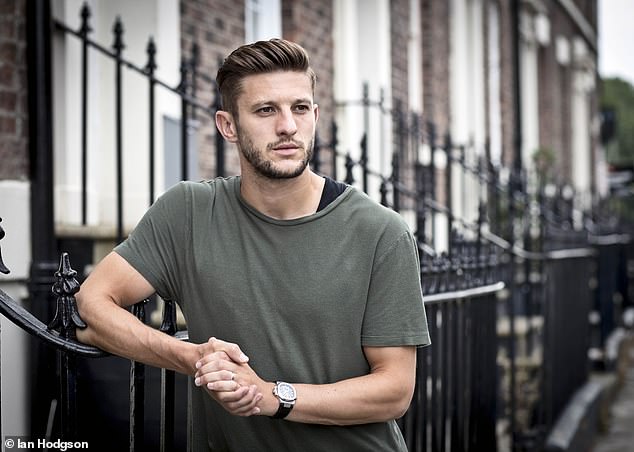 He craves time on the pitch and the adrenaline rush of a match-day afternoon. There has not been enough of that in recent times.

‘It just feels great to know that I am going to be playing,’ Lallana tells Sportsmail. ‘And I don’t mean that in an arrogant way. I don’t mean playing every game. That has to be earned.

‘It just feels nice that I am going to get game-time. Because of the level Liverpool were at in my last couple of years — coinciding with my injuries — it was so difficult to get back there.

‘Now there is a game for me on a Saturday. I have felt it already in pre-season. You work hard in the week and then you get your reward at the weekend. I am so excited for that, just being involved in the rough and tumble of it again.’ 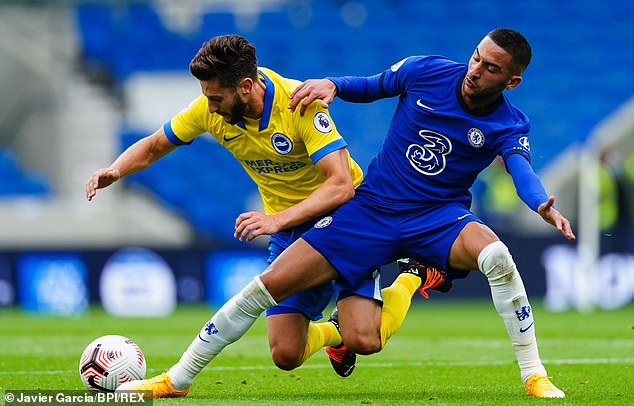 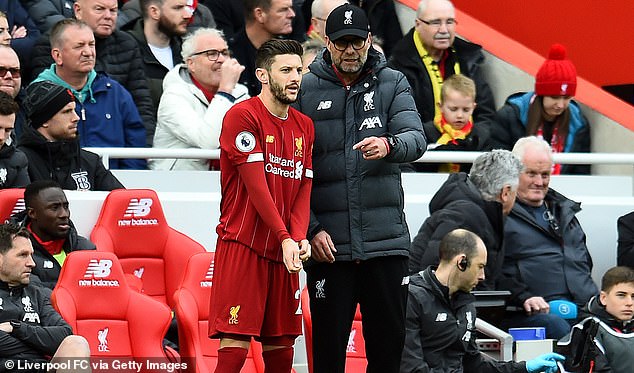 Lallana laughs when we touch on his new role as elder statesman. ‘I am not that old yet, bloody hell…’ he says. Equally, he remembers the guidance he was given by senior pros at Southampton and is ready to do the same.

Brighton were progressive in terms of style under Potter last season but still came too close to the bottom three for any kind of comfort towards the end of the campaign. Clearly, any further progress up the Premier League this season will be hard-earned.

‘When I was young I used to like the older players having a bit of time for me,’ he says. ‘Whether it was a 10-second b*****king or a bit of praise.

‘There is great young talent here at Brighton and I would just tell them to give themselves the best chance. I would urge them to listen to people. I can tell Brighton want to make strides forward.

‘It will be important to get to 40 points. Anything more won’t happen overnight. It’s about working hard to improve and become better people with better attitudes and morals, and then we can move our performance to the next level. That’s what drew me here. 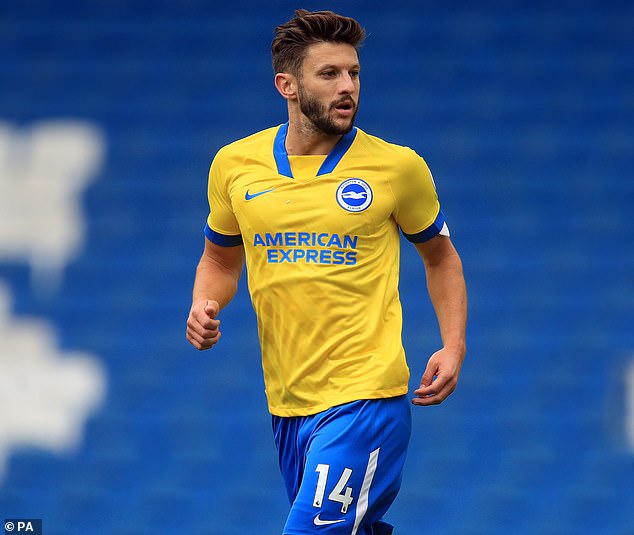 ‘My previous relationships weren’t built overnight. Trust comes from working hard together in difficult situations. That counts for a lot, in football and in life. It’s a good purpose to have when you wake up every morning. There is no reason why we can’t aim to finish in the top half. That would be something to be proud of.’

The last few years of Lallana’s career have not been easy. He has started only nine league games in his last three seasons and visited some pretty dark places as he struggled with muscle injuries in particular. But Lallana feels his struggles have given him a healthier understanding of football and of life.

‘Mentally I am as good as I have ever been,’ he says. ‘The older you get the more perspective you have. Football isn’t everything. When you do suffer a lot of injuries, you slowly learn that it is preparing you for life after football.

‘It’s going to happen one day so you had better get used to it. It’s been difficult at times but I have tried to build up some positives.

‘Listening to Brighton’s advice is also important now. They are the experts. It is refreshing being at a different club where people do things differently. Some of the gym work is different, for example. I like that. It’s going great.’

Lallana has enjoyed stellar years in the game. His reputation grew steadily at Southampton, he has 34 England caps and he left Liverpool with medals. Early on, it was not so easy. He suffered with the same digestive condition that afflicted former Manchester United midfielder Darren Fletcher — ulcerative colitis — and did not really flourish consistently at his first club until he was beyond his 21st birthday.

‘The ulcerative colitis is a continual battle,’ Lallana explains. ‘Over the last few years I have had a couple of flare-ups and its difficult. You can function with it but you are always on edge with it. You are just not 100 per cent so it’s not great to try to be an athlete.

‘It was harder when I was younger as I was naive and not as disciplined in taking my medication and eating the right food. But you live and learn. I am on top of it now and feel good.’ 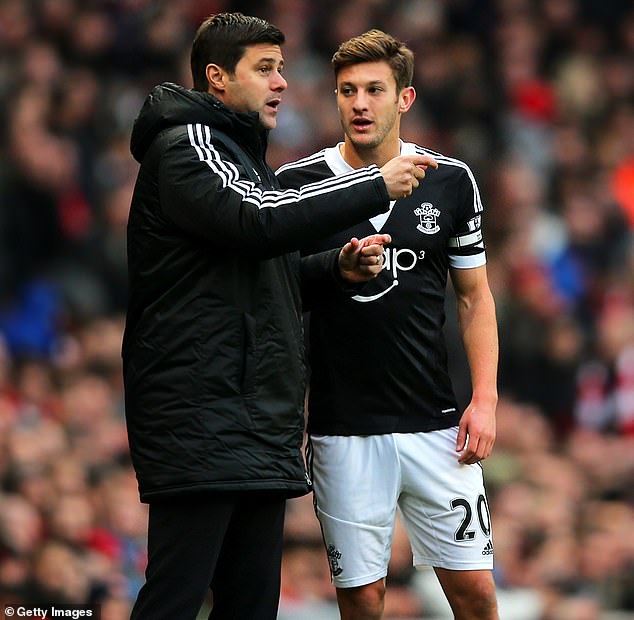 Lallana and Pochettino only shared one year at St Mary’s but the effect was profound. The two still speak all the time, so what is Pochettino’s next move? Where next for the Argentine?

‘I want to know that as well but I don’t,’ laughs Lallana. ‘It can’t be too long until he is back in the game. I mean, what an asset waiting for a club. I have the biggest soft spot for him.’

Lallana does not want to talk too much about Liverpool. His focus is on Brighton. Nevertheless, it is important to ask him about the last interview he gave before leaving Anfield in July. Speaking to the club TV station, he broke down twice when paying tribute to his friend and former captain, Jordan Henderson.

‘I was kind of avoiding doing that interview as I just knew my emotion was building,’ he says. ‘I am an emotional person and I knew this was the end of a chapter for myself, my wife and the kids. The interview was just raw emotion. In life sometimes things are just sad, aren’t they? As a family we were saying goodbye to friends and leaving schools and stuff. 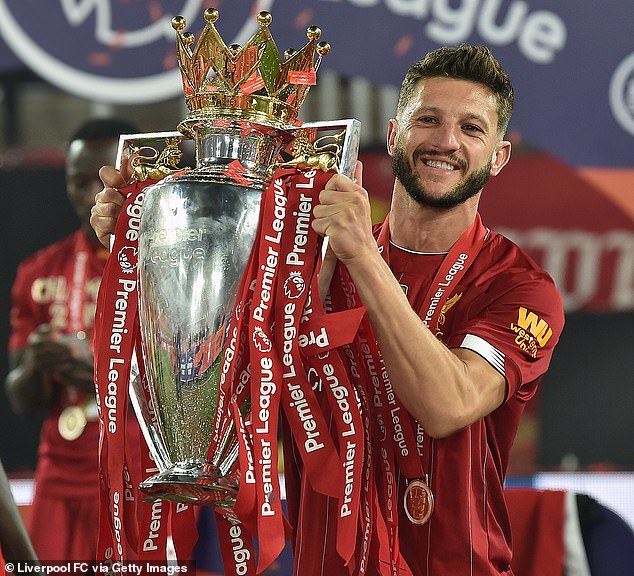 ‘So I got upset in that interview and then on the Friday at training I said goodbye and the manager gathered everyone round. The lads had done me a framed shirt and a nice quote from Hendo. I was crying so much that I was just laughing in the end.

‘Then we started the warm-up and Milly (James Milner) said me crying had almost set him off. From a tough Yorkshireman, that’s quite something. So it was the perfect send off really.’

It is illuminating to hear such honesty and for Lallana, those tears served a purpose. ‘The very next day I was meeting Graham Potter because Brighton were playing up at Burnley,’ he reveals. ‘Sunday I packed up, Monday was medical and that sadness just went. It just disappeared. Mentally, I was done with Liverpool. Not in a bad way. But the sadness was out, the emotion was out.

‘I have loved Liverpool. It was the best goodbye ever, winning the Premier League. But I don’t care now. I am ready for Brighton. In a day it just turned. Suddenly I was down in Brighton having my medical with my dad and my mate, giving them a tour of the training ground, the boot room, seeing where my peg was going to be. It was great. We are all Brighton fans now — buying the kids the kits.

‘So it was amazing that transition happened so quickly. I think because I had let my emotions out in that way it enabled me to get it done with. It always helps to have a good cry, doesn’t it?’ 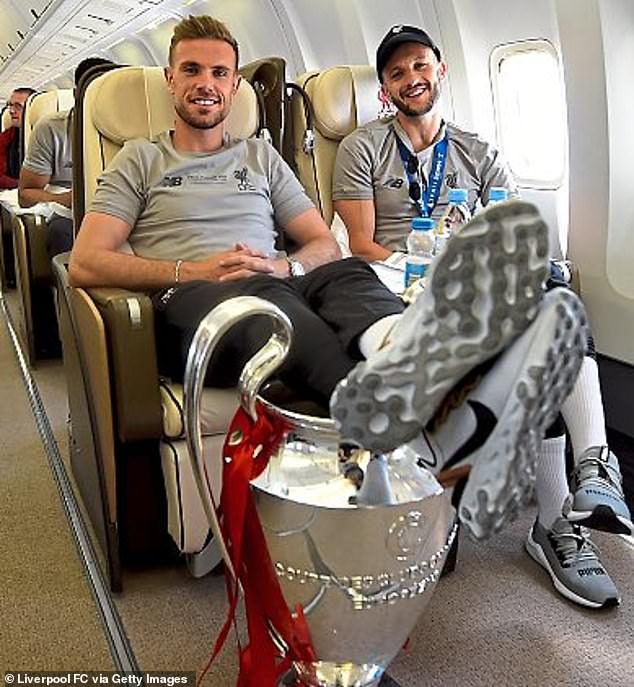 Lallana will miss his ex-team-mate Jordan Henderson, with whom he had ‘deep conversations’

Lallana will miss Henderson. The two men shared lifts to training together. ‘We had deep conversations about tough things,’ he explains. ‘We have both experienced the dark side of injuries and come through. He deserves all his success.’

Equally, he will take inspiration from others who’ve left Liverpool. Players such as Southampton’s Danny Ings, back in the England squad after knee injuries ruined his own time on Merseyside.

‘It couldn’t have happened to a better guy and he is a great example to look at,’ says Lallana. ‘I’d love to have him in my team.’

Lallana hopes to take some of the lessons learned at Anfield into the Brighton dressing room. One thing he will always remember is the lack of ego among Klopp’s players. ‘That’s something the whole Premier League should look towards,’ he says.

But he is at Brighton to grow and to learn and to play. He feels he has several years left in the game. Crucially, he feels fit. ‘I have settled in quickly and feel I have been here for ages,’ he says. ‘Brighton provided the whole package in terms of ambition, the manager, the model they work to. I was desperate for a new challenge and this ticked every box.

‘I am delighted to be here and I hope I have a great three years as that will mean I have contributed to success. I feel I have miles left in the tank and that feels great.’