Brisbane halfback Adam Reynolds has revealed the exact moment he knew his time at South Sydney was coming to an end.

Speaking ahead of the Broncos tackling the Rabbitohs on Thursday at Accor Stadium in Sydney, the man who grew up opposite Redfern Oval realised his dreams of being a one-club player in the NRL were going to be scuppered just over 12 months ago.

‘They basically tried to get me to sign a one-year deal (for 2022) and then find me another club for the following year,’ Reynolds said.

‘That was the moment I knew I had to get out and look at finding some security for my family.’

Negotiations began in April last year, but when Reynolds realised he wasn’t in the club’s long-term plans at number seven, he weighed up his options.

Even seeing his salary cut at Souths didn’t rattle Reynolds – all he wanted was the security of a two-year deal for 2022 and 2023. 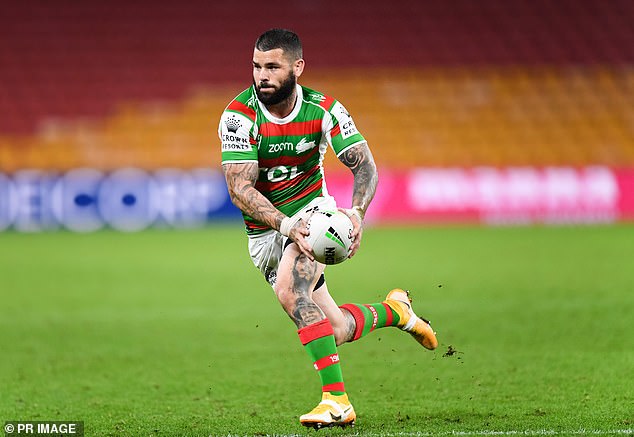 But the Rabbitohs weren’t interested, and after rejecting an offer from Cronulla and incoming coach Craig Fitzgibbon, the 31-year-old relocated his family north.

Reynolds quickly bought into Kevin Walters’ vision at Red Hill and has been a key figure in Brisbane’s revival, with sees them currently just outside the top eight.

Many in Reynolds’ shoes would be bitter at the shabby treatment from his boyhood club – but the cheeky playmaker insists he has ‘no ill feeling towards anyone at the club and will ‘forever cherish the opportunity that I had to wear the red and green.’

The Broncos stunned the Rabbitohs 11-4 in round one at Suncorp Stadium, but Reynolds didn’t play after testing positive for Covid.

He is fit to play this week and expects plenty of on-field banter from his former teammates come kick-off – with backrower Jai Arrow front and centre.

‘He (Arrow) will run at me and there will be contact involved, but I’ll throw my 85kg at his 120kg frame…or is it 130kg?’ Reynolds told the Sydney Morning Herald.

Reynolds made his NRL debut with South Sydney in 2012 and won a premiership two years later.

He is the Rabbitohs’ highest point-scorer in club history ahead of former greats Eric Simms and Bernie Purcell.