Add some magic to your mantelpiece: With this ingenious trick

Deck the halls with boughs of holly? If you must, but mantelpieces are where it is at this year.

Cheryl had one and so did Mariah Carey. Ivanka Trump decided to go completely wild and did hers with green baubles and ostentatious ribbon.

Of course, hearthside decor is nothing new. Pagans decorated with branches on the winter solstice to remind themselves that spring would come, while Christians used evergreens as a symbol of everlasting life. Perhaps that’s not what Kate Hudson was thinking when she went for blue bows and plastic globes, but you get the snowy drift.

On Saturday, the Duchess of Cornwall appeared on Strictly Come Dancing, beamed in from Clarence House, London, in front of her own decorated fireplace. I know it’s considered posh not to make too much of an effort, but what a mess!

Jan Moir reveals how to create a Christmas mantelpiece (pictured), as celebrities including Cheryl and Mariah Carey reveal they’re fond of the decorations

I’m no florist, but many years ago my American friend Susan showed me how to create a Christmas mantelpiece, and I have been making them for friends and family ever since.

And, as I am going to tell Camilla at the first opportunity, it is pretty straightforward to make yours look beautiful — instead of a shipwrecked load of greens chucked up there by a passing tornado.

Note, this is not a definitive guide. It is merely how I make my ‘Jantelpiece’. All you need for an effect that looks as if it cost hundreds (when it cost just £80) are supermarket flowers, a small tree and a little knowhow . . . 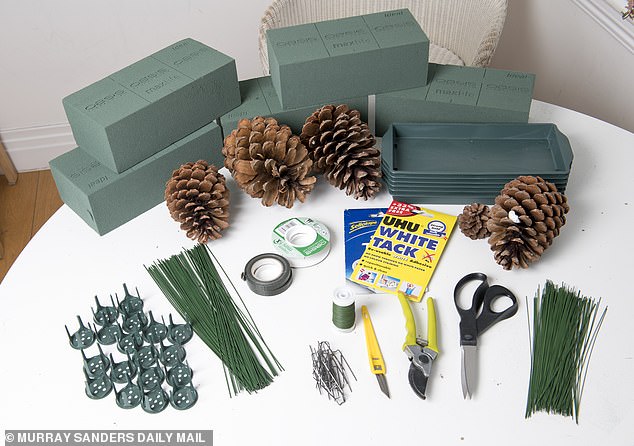 Jan said a Christmas mantelpiece can be made for just £80, using supermarket flowers and a small tree

THE GREENERY: A 4ft Christmas tree. I prefer a Nordmann, but any will do. Ask for damaged or misshapen ones, which will be cheaper. You’ll also need a bag of wet sphagnum moss, or two sheets of moss; two bunches of eucalyptus; holly or other greenery to fill; and dried pine cones. Trailing ivy is nice, too.

THE BLOOMS: A bunch of red roses from any old where, or poinsettias to be traditional.

HOW TO DO IT

Before you start, measure your mantelpiece. It will need to have a depth of at least 12.5cm for the trays. Work out how many trays and blocks you need. My 160cm-long mantelpiece needed six single block trays. Put down a groundsheet for any mess. 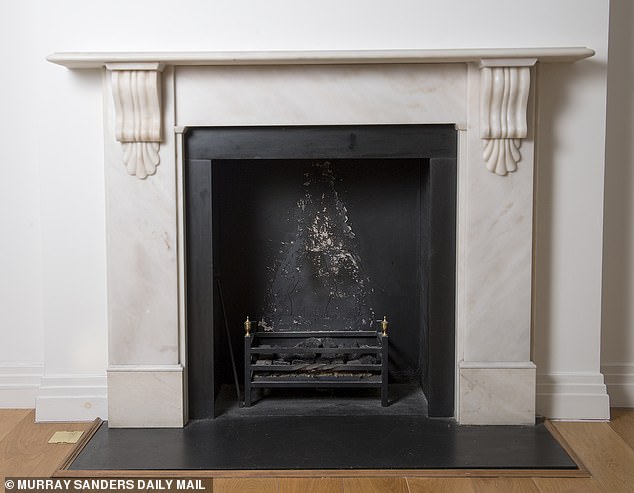 Jan said it’s important to measure your mantelpiece before beginning, it needs to have a depth of at least 12.5 cm for the trays

Step 1: Soak the blocks in water for 20 minutes. Meanwhile, spread the trays on the mantelpiece. They can have gaps between them. Affix with Oasis Fix and press down on each corner. (Museum putty, White Tack or — at a push — Blu Tack can be used as substitutes.) Stick three frogs onto each tray, or use green florist tape. Take the wet blocks and push them on top of the frogs to secure.

Step 2: Cover each block with the moss, using mossing pins to secure.

Step 3: Trim your tree. Wear rubber gloves, as pine sap is harsh on skin. Snip down the branches, arranging into large, medium and small frondy piles as you go. Save any nice curving bits for the sides. 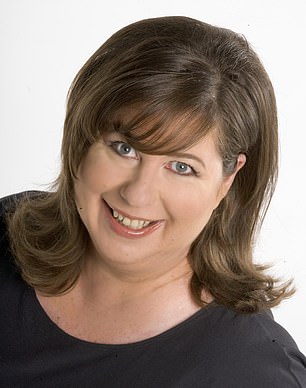 Jan (pictured) revealed she used mistletoe in her Christmas mantelpiece

Step 4: Now mark out the parameters by pushing some branches into the wet blocks. I put a big one in the middle, one at each side and a few small ones at the front. Be bold — make it slightly bigger than feels seemly. Put the heavier branches at the back to keep the structure secure. Spear in some eucalyptus to add height.

Step 5: Fill in the gaps with more pine, being sure to keep it symmetrical. If yours is a working fireplace, keep the overhang in the centre to a minimum.

Step 6: Add some clumps of holly or other greenery at either side of the centre — I used mistletoe. Wire the pine cones and stick them into the blocks. Add any extra decorations. Spear in the roses, twirl in the fairy lights and you’re done. Water carefully every few days, directly onto the blocks, using a long-spout can.