Adele was dripping in jewellery worth ‘£2.2 MILLION’ during her boozy night out at a gay club

Adele is thought to have been dripping in £2.2 million worth of jewellery when she gave a civilised interview on The Graham Norton Show before enjoying a boozy night at London’s G-A-Y nightclub on Thursday.

The singer, 33, who boasts a reported net worth of £162 million, pole danced, stripped to her bra, admired topless dancers and made a swearing rant before falling over – all while wearing 22 carats in earrings worth over eight times the average UK house price.

As well as an ‘engagement ring’ worth an estimated $1m (£740,000) according to Page Six, her £1.5m Jessica McCormack ensemble began with 5ct, 4ct and 2ct Diamond Gypset Hoop Earrings, as well as three Ball n Chain Necklaces.

Jaw-dropping: Adele is thought to have been dripping in £2.2 million worth of jewellery when she gave an interview on The Graham Norton Show

The Tottenham-native certainly engaged in risky business as she sported the eye-popping ensemble while overindulging in drinks at the gay bar, with the 5ct Diamond Gypset Hoop Earrings being the most expensive at a whopping £550,000. 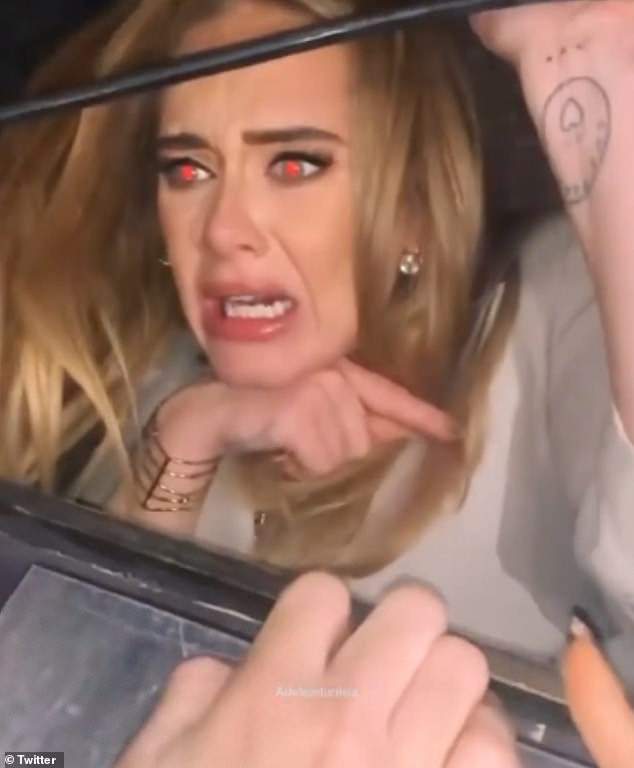 Iconic: The singer, 33, pole danced, stripped to her bra, admired topless dancers and made a swearing rant before falling over – all while wearing 22 carats of diamonds (pictured on Thursday)

The worse-for-wear songstress, who said she had given up drinking in October 2021, was seen in tears as fans cheered for her, leaning down from her VIP area to ask a group of revellers on the dancefloor, ‘How does everyone know it’s me?’

Hours earlier, she had put on a very civilised performance in a pre-recording for The Graham Norton Show, where she revealed that she wants to have a baby with her boyfriend Rich Paul and continued to fuel rumours that the couple are engaged.

During her boozy night out, the I Drink Wine songstress decided to get involved with the action, dashing down from her VIP box to storm the stage where she performed a pole dance as topless dancers looked on in shock. 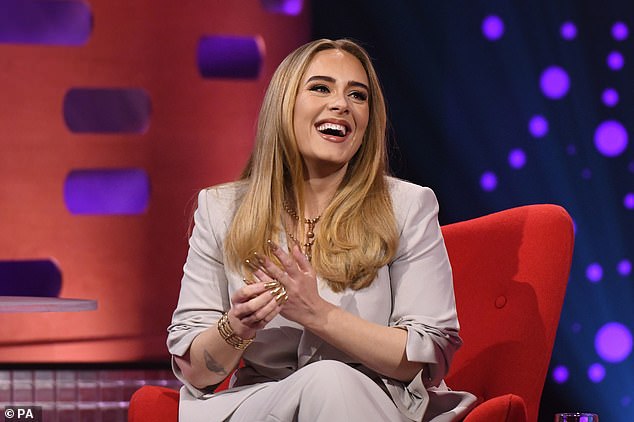 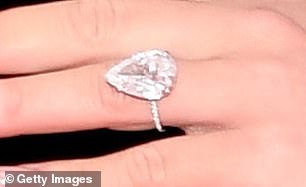 Adele, who is back home in London following her triple win at Tuesday’s BRIT Awards, was filmed by clubgoers as she danced in a £3280 Fendi suit with her pals and sang along to It’s Raining Men.

Once on stage the star told the cheering audience that her designer shirt had ripped and joked: ‘I’ve been wetting myself’.

RuPaul’s Drag Race UK star Cheryl Hole was hosting the event and shared snaps with Adele on Instagram in the early hours of Friday.

A video shared by a fan shows Adele asking to have ‘the final say so’ in the stripping contest as Cheryl tells her ‘you can have the final say, you’re f**king adele and I’m little old Cheryl.’ 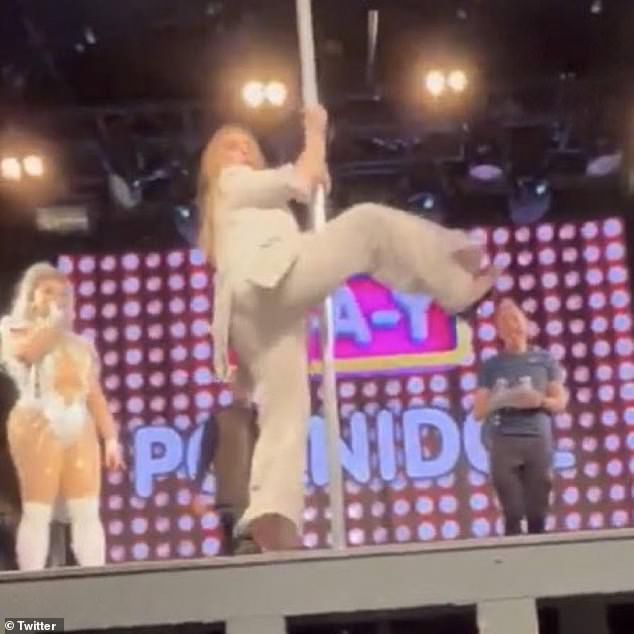 Hilarious: The worse-for-wear songstress certainly engaged in risky business as she sported the jaw-dropping ensemble while overindulging in drinks at the gay bar (pictured on Thursday) 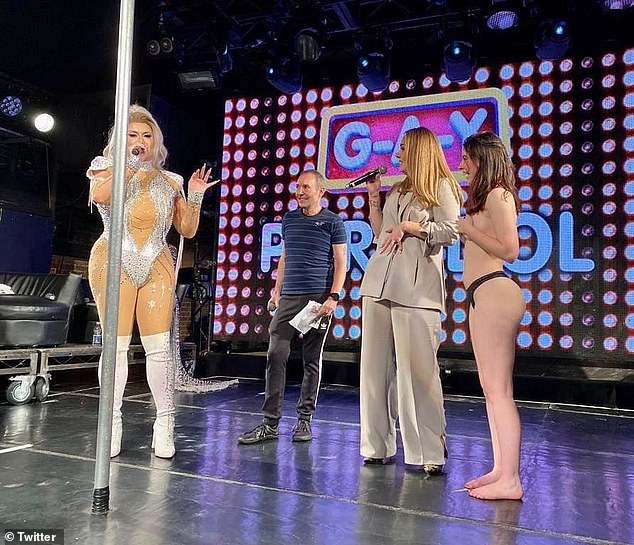 The singer is then seen asking Cheryl to hold together her shirt as she says ‘I’ve been wetting myself, my shirt ripped apart.’

Adele eventually picks a winner after stumbling around the stage, addressing the BRIT Awards controversy from two days previously as she told the shocked topless competitor: ‘I’m going to go with my girl! I know I’ve had a lot of s**t the last couple of days.’ 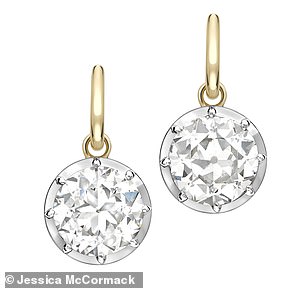 ‘F**king love being females’. Cheryl asks Adele if she can sing a song on her next TV special, after the star previously invited her best pal Alan Carr on stage with her.

‘Yes 100% Congratulations my lovely, you are lovely I can see it in your eyes. You are lovely. Females all round baby!’

Adele made her opinions known at the ‘woke’ BRIT Awards ceremony earlier this week, as she hit back and insisted she ‘loves being a female artist’, after bosses bowed to calls to rid the awards of gendered categories.

Adele beat hotly tipped contender Ed Sheeran in the Artist Of The Year category – which now includes all artists regardless of gender – after they both released long-awaited albums around the same time last year.

During her acceptance speech, Adele told the audience: ‘I understand why the name of this award has changed, but I really love being a woman and being a female artist, as she referenced the changes the awards board had made to the ceremony.

The BRIT Awards sparked controversy last year when they announced they would be ditching the traditional male and female categories and switching to gender-neutral gongs for the first time in its history, causing naysayers to brand the event ‘woke’.

‘There were no requests or demands’: Adele shocked club owner as superstar turned up unannounced 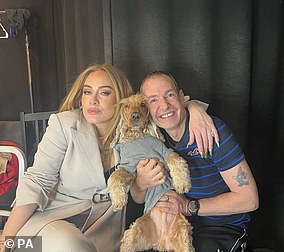 The clubowner said: ‘She was so normal and so lovely and just came backstage and hung out and went into the box to watch the show.

‘It wasn’t advertised; it wasn’t planned, which makes it more special. She just turned up. There were no requests, no demands, there was nothing like that.

‘I’ve had friends message me saying ‘why didn’t you tell me?’ and it’s because I just didn’t know. No one believes me but I didn’t know!

‘There were people crying their eyes out saying, ‘oh my God I’ve just seen Adele!’

‘She had friends with her, it was a big group, and it was like let’s go and have some fun. She didn’t want to go out and be pretentious; she just wanted to have fun. It is really surreal.’

Jeremy said: ‘We didn’t try to get her on stage or anything like that because they are there for a night out – I had no idea she was going to walk on stage. There was an argument about who should win the competition, and someone decided Adele was going to come and pick.

‘I said ‘judges, you’re being overruled’ – literally, all you could see in the audience was a sea of phones.

‘We normally get 7/8 contestants backstage before the show, and we pick from the audience and Martha was picked out from the audience, so we only met her there and then. She came up onto the stage, so we have no idea.

‘The pole dancing… it was one of those moments completely unplanned, the first thing she did when she walked on stage, and she ignored the audience, and just started stroking my dog Jacob. The pole is there for the contestants to use and she just started copying one of them.’