The adoptive brother of Erica Parsons, whose adoptive parents are accused of killing her, has reportedly been charged with having two wives.

James Parsons, 25, allegedly married a woman in June while he was still married to another woman, according to the Charlotte Observer.

Erica Parsons’ adoptive parents were indicted earlier this year in the child’s death and dismemberment. 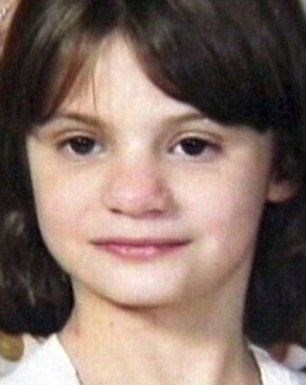 James Parsons (left), 25, the adoptive brother of Erica Parsons (right), has reportedly been charged with having two wives. Erica Parsons’ adoptive parents are accused of dismembering and murdering her 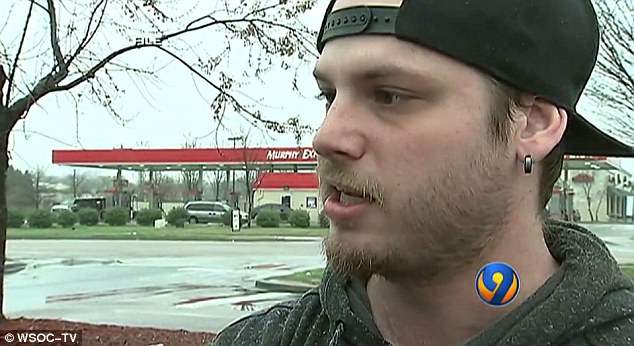 Sandy and Casey Parsons were charged with murdering the 13-year-old girl, whose cut-up body was found in 2016 in South Carolina.

A grand jury indicted the Parsons on counts of first-degree murder, felony concealment of death and obstruction of justice.

The pair are already serving sentences on fraud convictions for accepting federal benefits for Erica after she went missing.

In 2015, James Parsons testified that he and other children in the family abused Erica.

At the time, he claimed that his mother would often urge him to abuse Erica and that he once broke her arm. 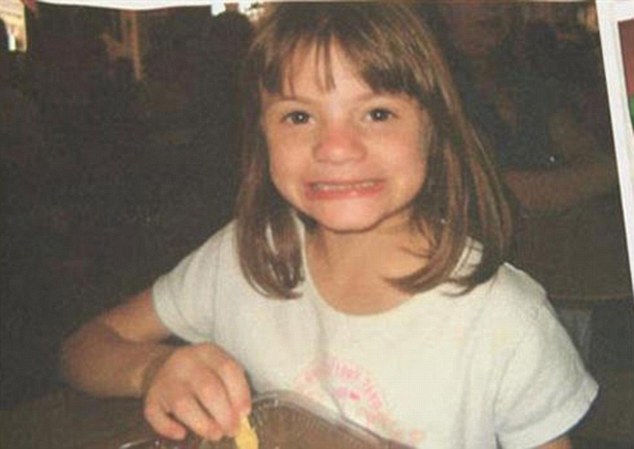 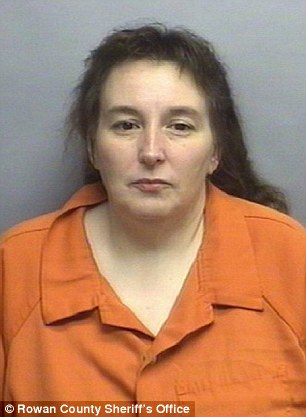 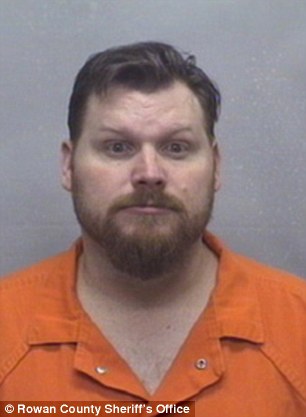 Sandy and Casey Parsons (both pictured) were charged with murdering the 13-year-old girl, whose cut-up body was found in 2016 in South Carolina 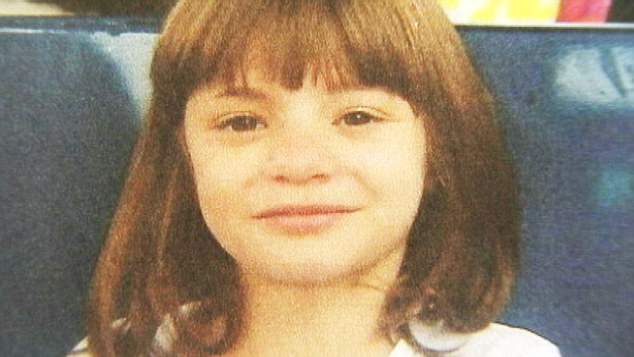 Mutilated: The indictment alleges that the adoptive parents tried to conceal 13-year-old Erica’s death by dismembering her body and removing some organs

In 2016, Sandy Parsons led authorities to Erica’s body in Chesterfield County, South Carolina. An autopsy showed she had broken bones all over her body.

The indictment does not list a specific cause of death for Erica, other than to say that she died of ‘homicidal violence’.

‘It’s been a long time in coming,’ Sheriff Auten said at the time of the indictment.

‘There are people who think that the Parsons should have already been hung on the square. They’ll have their day in court and we’ll let the jury decide their fate,’ reported WBTV.

According to a graphic autopsy report that was released last month, the disabled 13-year-old girl was malnourished and had broken bones all over her body.

The Office of the Chief Medical Examiner in Raleigh in January concluded that Erica died of ‘homicidal violence of undetermined means,’ having been unable to determine the exact cause and manner of death due to the level of decomposition.

Erica may also have had an untreated infection, sepsis, renal failure or poisoning, all of which could have resulted in her death.

Citing the child’s ‘history of physical abuse,’ the medical examiner has not excluded a terminal blunt force injury, suffocation or strangulation as possible causes of death.

Her smaller than normal, low-density bones showed a growth deficit consistent with malnourishment, according to the report. 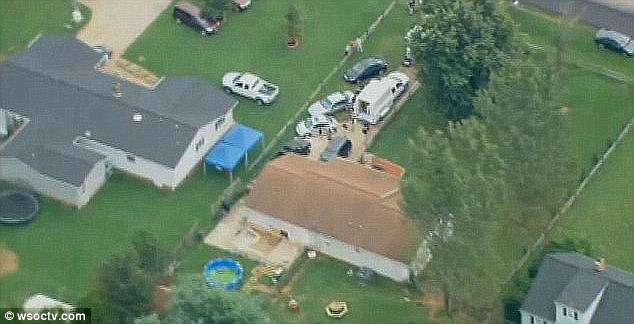 Authorities searched the home of Erica’s adoptive parents after she was reported missing (pictured), uncovering signs of foul play 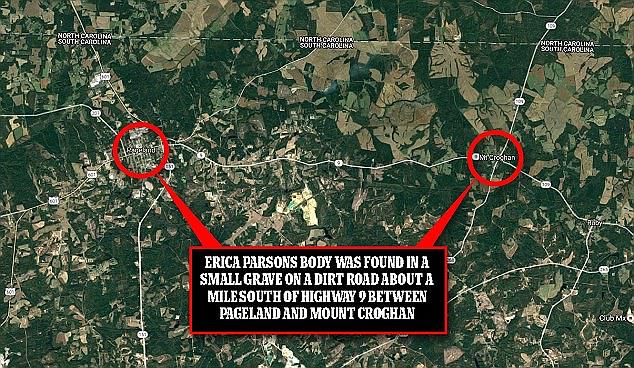 Erica’s remains were discovered in the Pageland Mount Croghan area of Chesterfield County, South Carolina, in 2016

The child’s skull and bones were found by detectives in a shallow grave in the Pageland Mount Croghan area, not far from where Sandy Parson’s mother lived, in October 2016.

The adoptive parents were arrested in 2014 and found guilty the following year of fraud for accepting $12,000 in federal benefits for Erica after she went missing.

Casey Parsons, Erica’s uncle, and his wife took in the disabled child when she was five months old and adopted her in 2000.

Her birth mother, Carolyn Parsons, told the Charlotte Observer she had no money to raise her and did not want her to be in foster care.

Erica was reported missing from the Parsons’ household in Salisbury on July 30, 2013, by a young relative who said she had been missing since December 2011, when she was reportedly sent to live with her biological grandmother, Irene ‘Nan’ Goodman, according to the report and previous media coverage.

An investigation was launched and attempts to locate the grandmother and child were unsuccessful. 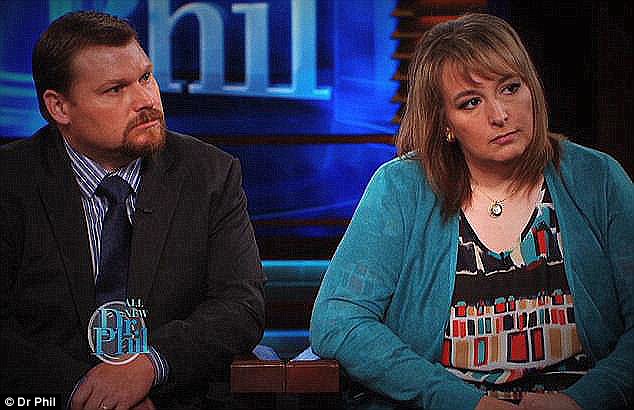 Sandy and Casey Parsons (both pictured), spoke to Dr Phil about Erica’s disappearance in 2013, are already serving time in federal prison for fraud

The developmentally disabled, malnourished girl was reportedly beaten with a belt buckle that broke her skin, was choked and thrown to the ground, had her hand slammed in a door, was forced to sleep in a closet and fed dog food.

The report mentioned instances in which her fingers were bent ‘all the way back’ and one episode in which her tooth was knocked out.

At another time, the report states, her arm was fractured and a homemade cast was applied ‘to avoid seeking medical attention,’ as a result of which the limb never healed properly.

A review of medical records revealed that Erica’s last visit to a pediatrician was when she was six years old, at which time the doctor ‘expressed concern for her poor growth’.

A week before her disappearance in 2011, her siblings described her as ‘looking grey with sunken eyes, smelling bad with open, oozing cuts, very weak and complaining of not being able to breathe,’ the report stated.