A tiny footprint belonging to a baby dinosaur has been discovered in China.

The imprint measures just 2.24 inches (5.7cm) long and the exact species that made it remains unknown, but it is thought to be a diminutive stegosaur.

The most famous stegosaur is the Stegosaurus, a 21 foot-long,plant-eating giant known for its protruding backplates and mace-like tail.

A footprint found in China is thought to belong to a baby stegosaur, xperts believe it would be armoured and have a spiked tail, just like the enormous adults (pictured, artist’s impression) 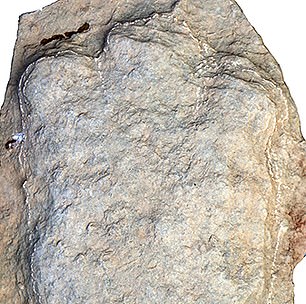 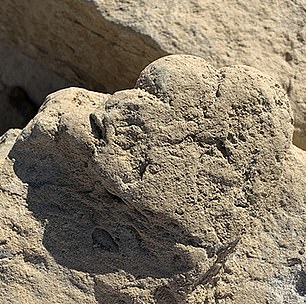 Dr Anthony Romilla, a co-author of the study from the University of Queensland, said: ‘This footprint was made by a herbivorous, armoured dinosaur known broadly as a stegosaur – the family of dinosaurs that includes the famed stegosaurus.

‘Like the stegosaurus, this little dinosaur probably had spikes on its tail and bony plates along its back as an adult.’

Researchers who found the footprint in the Lower Cretaceous Tugulu Group of Xinjiang Province, China, say the footprint was found near much larger versions.

The international team of paleontologists say this indicates the dinosaur was likely surrounded by older, fully grown family members.

Writing in their scientific paper, published in the journal Palaios, the experts say they pesume the track was made by a dinosaur known as ichnogenus Deltapodus.

They say the other footprints nearby are around six times larger and the baby imprint is ‘the smallest convincing example of a Deltapodus currently known’.

Finding a stegosaur footprint smaller than around five inches (12cm) is very rare, with the previous smallest ever discovered being 3.13inches (8cm) long.

The footprint has three short, wide, round toe impressions which researchers believe is proof that it belongs to a stegosaur.

They also say its shape reveals young stegosaurs had a different gait to the much heftier adults.

Adult tracks are elongated which means the giant dinosaurs walked with their heel on the ground, like humans.

But the baby stegosaur had its heel lifted, indicating it walked on its toes, like a cat or bird, with the bottom of its foot not touching the floor.

‘The stegosaur could have transitioned to heel-walking as it got older,’ Dr Lida Xing, the paleontologist from the China University of Geosciences in Beijing who found the print, said.

‘A complete set of tracks of these tiny footprints would provide us with the answer to this question, but unfortunately we only have a single footprint.’

More than 2.5 BILLION T. Rexes lived on Earth in their 2.5million-year history

Tyrannosaurus rex. Their name means ‘tyrant lizard king’ — and as far as popular culture goes, they certainly ruled the dinosaurs. But just how many were there?

According to experts from California, the answer is a whopping 2.5 billion of the beasts over the 2.5 million years they roamed North America in the Late Cretaceous.

Around 20,000 adult T. rexes were probably alive at any given point during the species’ existence — give or take a factor of ten, the researchers have estimated.

T. rex — along with the rest of the dinosaurs — went extinct in the wake of a devastating asteroid strike on the Earth some 66 million years ago.